Kia has built its reputation in the UK with its family-friendly SUVs so it was probably only a matter of time before introducing its compact SUV.

Based on the Rio hatchback, the new Stonic has a longer body and stands slightly higher on the road with added ground clearance over the supermini stablemate. 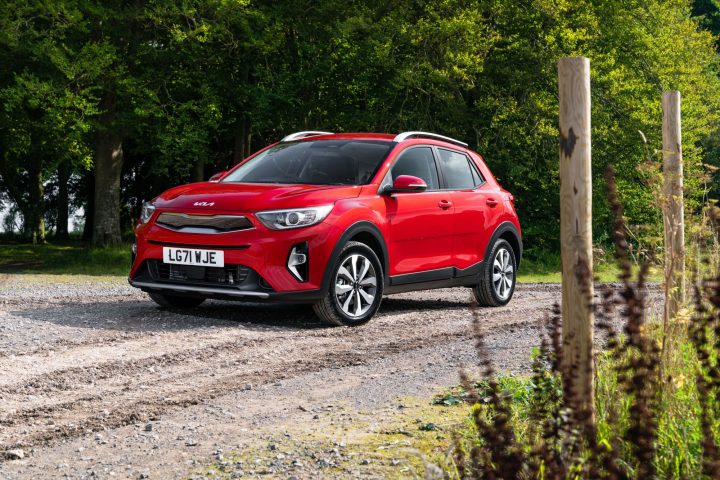 The Kia Stonic comes in eight versions: two engines and four trim grades –‘2’, ‘GT-Line’, ‘Connect’ and ‘GT-Line S’. The ‘2’ grade is offered with the 1.0-litre T-GDi engine developing 99bhp and six-speed manual transmission, which we tested, or a dual-clutch automatic unit.

Other versions get the new 48-volt mild hybrid 1.0-litre T-GDi engine that produces 118bhp, with a six-speed manual as standard. 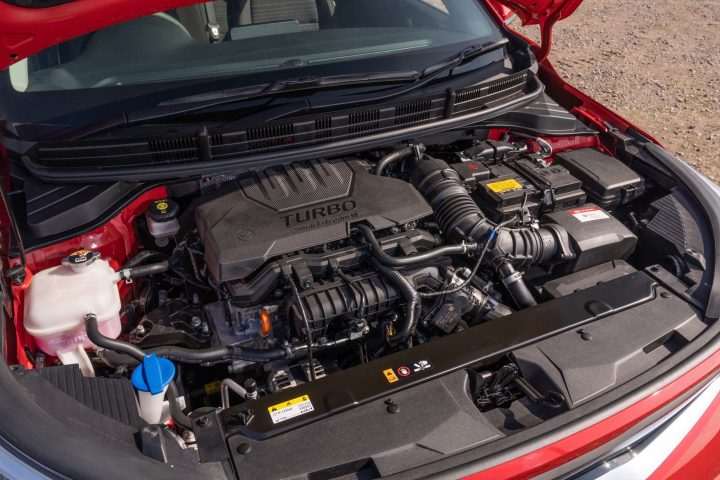 It’s what you don’t see which makes the Stonic particularly attractive however, including the advanced sensory monitoring and safety equipment all designed to keep the occupants safe and car out of trouble, with the latest in-car infotainment system integrating with a user’s mobile phone.

The Kia Smartstream petrol engine is of modest size but it too is packed with innovations which allow the car’s computer brain to select the optimum combustion cycle bearing in mind the driver’s selection of eco, sport or normal modes.

Our test car was an excellent city runabout or short commuter car with long legged potential thanks to the overdrive ratios on the top three gears and without any frugal driving it returned over 50mpg, which is more than the WLTP figures suggest it should have done. Another surprise there.

The engine was definitely best suited to running under 4,000rpm and seemed sweetest about 2,200rpm because when extended it audibly struggled and there was not much punch but a harsher engine note also crept into the cabin.

It could keep up with town traffic and with some careful consideration when overtaking it had respectable acceleration for passing slower traffic. At 60mph on main roads it was very composed and quiet, but stretch to just 70mph and it became noisy. 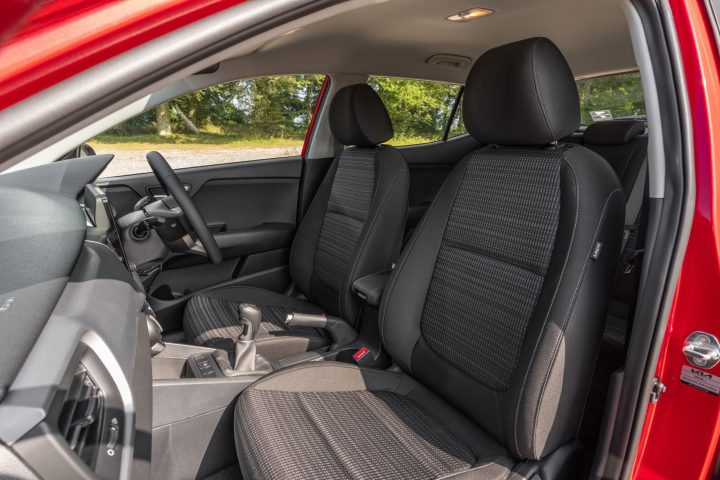 The Stonic’s gearchange was direct but long throw and the clutch had surprisingly long travel to its bite point. Brakes were very good at precisely slowing the car as desired while the steering felt a bit dull but delivered a good turning circle without any vibration at speed or much kick-back over bad surfaces.

Secondary controls were immediately to hand and worked well on the wheel-spokes and spread over the fascia to left and right of the driver with good sized rotary knobs for temperature and fan selection of the air conditioning which was effective, quick and quiet. Dials were simply laid out infront of the driver, decent sized and very clear.

Oddments spaces were generous throughout and you could hook up USBs on the central tray with its small compartment box and matched with really big door bins front and back. Access to the small rear boot was easy with a low loading floor and a good shape to fit in a modest amount of shopping unless you folded down the individual  rear seats. 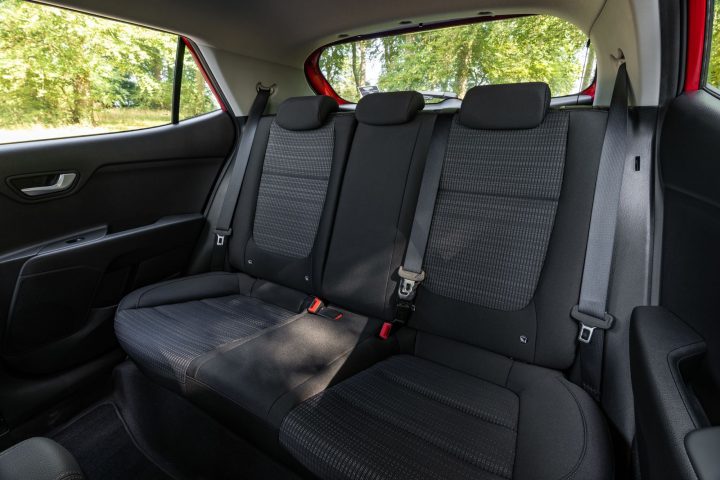 Access for passengers and driver was reasonable even if the apertures were not big and once inside the seats were nicely shaped but on the small side to give support to larger occupants. Adjustment was adequate but not generous infront and those behind found legroom was short and it was a squeeze for three.

Noise levels were generally low, a little more noticeable on bad surfaces and when the engine extended, but wind and most mechanical sources were kept out of the cabin. Visibility was fairly clear all round apart from blindspots to the rear, wipers/ wash were good and headlights adequate.

With its modest engine size and power you were not really going to challenge the Kia’s chassis and it proved very safe and surefooted for a small front wheel drive car. Tight turns could encourage it to run wide if attempted with attitude but it instantly responded to easing off the throttle or unwinding the steering. There was some body lean but dipping and pitching were restrained. 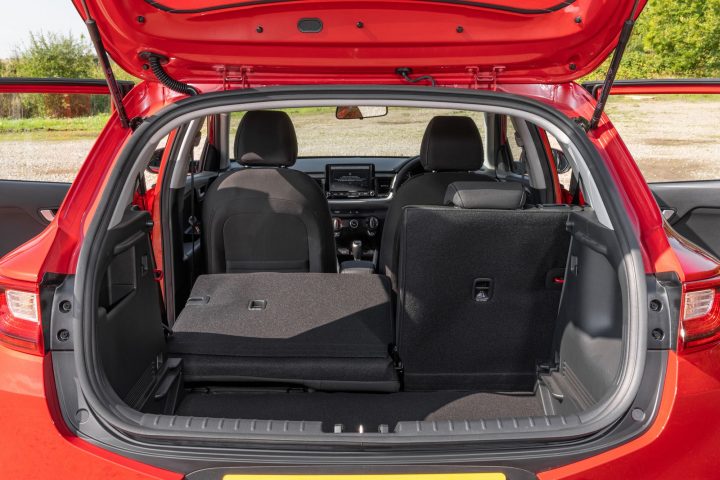 As a package the Kia Stonic was very capable within its limits but its not the roomiest city car despite its Crossover design and with the 99bhp triple-pot engine and emissions it works out expensive to tax.

A long warranty is definitely a strong selling point with this car and it would provide a lot of trouble-free undramatic motoring. 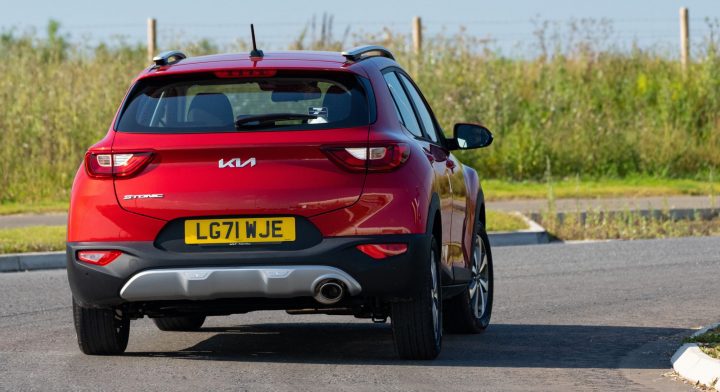