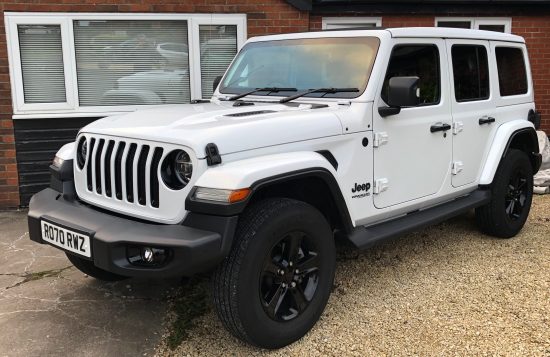 Respect is earned, not awarded, in the motor industry, and one of the most influential vehicle brands is Jeep, now on the eve of celebrating its 80th anniversary in 2021.

Think about that for a minute; it was born out of WW2 conflict, battled through the 20thcentury’s consumer culture and taken on many imitators.

It’s doubtful that Land Rover would exist if it wasn’t for Jeep and after seven decades it’s still going strong.

Jeep is planning a number of dedicated events throughout 2021 to highlight its achievements and bring it closer to fans, COVID-19 restrictions permitting.

There are four model series with variations in Compass, Renegade, Grand Cherokee and Wrangler and it’s the traditional or original nameplate we wanted to test.

The range-topping Sahara is a luxury SUV which has enormous off-road potential and an ability to tow nearly 2.5 tonnes, helped by its eight-speed automatic/ manual gearbox and range changes from 2WD high to 4WD low. 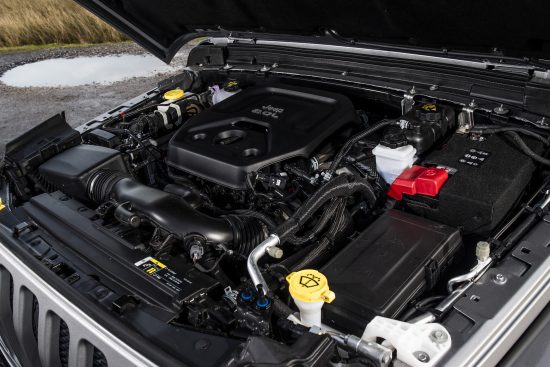 At its heart is a now well-developed 272ps 2.0 litre four cylinder turbo-petrol engine which probably is sufficient for all but the heaviest duties and emits 260gkm, pulling it into the highest BIK group.

Combine this with the purchase cost and it also means over £2,100 first year tax and £470 for the next five years.

The engine was an instant starter and had a distinctive deep rumble when idling that muted and changed under acceleration. The power came in smoothly and it moved along very easily if not quickly.

The Sahara easily kept up with traffic and the gearbox was smooth and quick acting up or down the range but could be heard whining away at times, particularly just before an up-change. The separate transfer box was firm to use but straightforward and you were left in no doubt this is a serious off-roader if you want to chance the beautifully sculptured panels between or over obstacles. 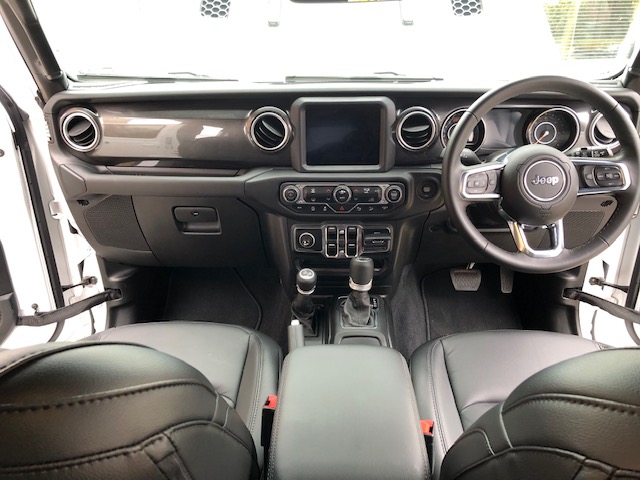 While I liked the powertrain overall despite its thirst for petrol the steering was less endearing. It’s a big wheel and the feedback was not involving but remote while the turning circle was large and easing into a tight space was a challenge, often accomplished with a few attempts. The brakes, on the other foot, were extremely finely balanced between assistance and ability to smoothly haul it down from speed or hold it on the usual test slope without any issue whatsoever.

Secondary controls for most-used functions were crammed onto two stalks and two steering wheel spokes and needed some familiarisation but they did work very well and had a particularly solid feel to their operation. The ancillary switches were close on the lower fascia. 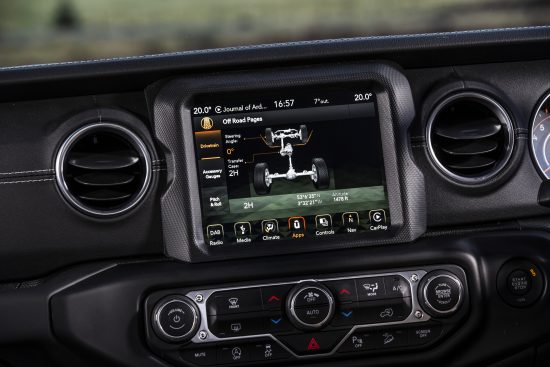 The central console was topped by a 8.4-inch touch screen for most clearly shown infotainment system features and included a big map, but its data needed refreshing on the test car. It was straightforward to use, quickly connected to a mobile phone and had very clear readouts. Between the speedometer and tachometer dials infront of the driver was a changeable on-board computer screen and this was also clear to read.

Heating and ventilation controls were elementary and efficient, filling the cabin with chosen air temperature and output, good directional control and was not particularly noisy. Four power window buttons were close to these.

Our model had the optional power-top, a fabric folding roof opening to give a staggering 24sqft of topless motoring, surely the biggest on any passenger car? 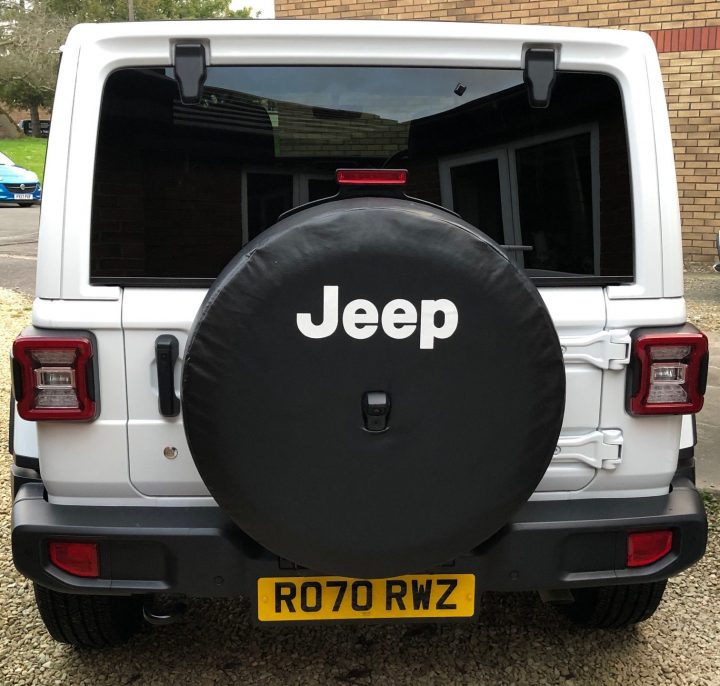 Oddments room was very good with door nets, console trays and cupholders, cubbybox and a reasonable glovebox infront and some bottle holders built into the rear doors’ linings as well as seat-back pockets for the three rear seat occupants. Split 60/ 40 folding rear seats meant the luggage capacity could be gradually increased and best done though the side doors as it was a long stretch from the split folding and offside-hinged tailgate.

Luggage capacity was huge in five-seat configuration and more than doubled when the rear seats were dropped almost completely flat. 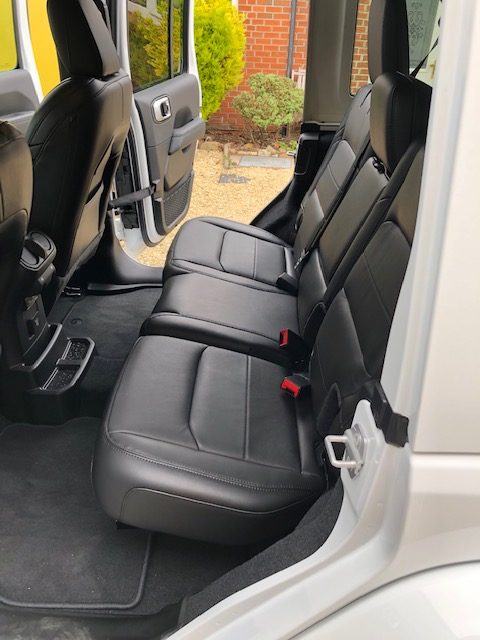 Access was usually a climb up for occupants and the door openings are not particularly big for them so you have to sort of double up to get in using a grab handle, but it’s worth it because the leather covered seats are surprisingly comfortable and locate well although I am not a fan of their cheap fabric pull cords for reclining while reach and tilt are by levers and a rotary knob. You sit high in the Sahara with an excellent view forward, to the sides and not too obstructed a sightline to the back, but the excellent very clear reversing camera has a wide field view to assist when needed and overcomes the obscured view due to the spare wheel mounted on the door. Lights were very bright, wide and long beamed, ideal for country lanes or moorland and the wash/ wipe system was highly effective.

In performance terms this near two-tonne SUV with its 2.0 litre engine was not going to be a road burner but it was very respectable and despite the noise it coped well unless heavily laden. 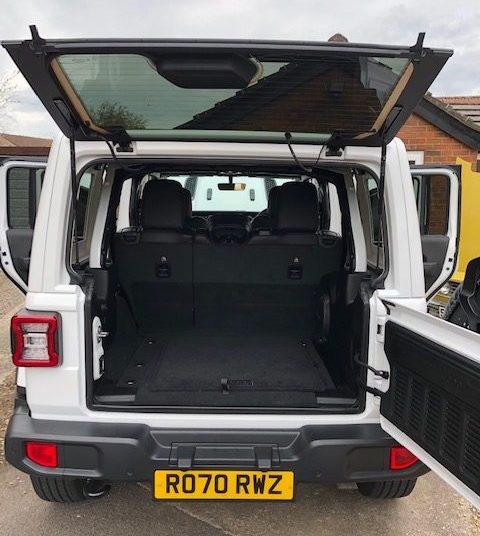 The ride quality was always firm, not really hard, but it let you know what it was coping with beneath the tyres and the handling was not so much sporting as failsafe in responses and did hold on well through bends and over poorly surfaced corners when some body roll was evident but not really an issue.

Offroad it is a completely different story of utter control and impressive ability without effort on the driver’s part, and the only real limit is the ground clearance and driver’s nerve.

What the Jeep Wrangler Sahara does for the price is head turning and makes it look like very good value against its rivals in the sector.

What’s more, it’s following ancestors with a rare ability to keep on earning that respect.