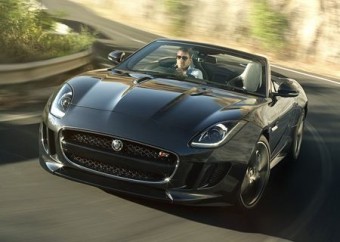 Jaguar’s reputation has been honed with its sports cars over 75 years and its future looks in safe hands behind the wheel of the new F-Type two-seater.

The iconic British car-maker turned the corner towards profitability when it was acquired by Tata in 2008 and it has been accelerating its reputation ever since.

In 2012 it passed another milestone with the Paris motor show launch of the new F-Type, a natural successor to the former XK and E-Type series of sports cars.

Launched as three derivatives with 340 or 380 3.0V6 and 495 5.0V8 engines with standard Quickshift eight-speed automatic transmission, all utilise aluminium chassis, body and suspension components and most have active-exhaust and high specification including limited slip differential and sophisticated info-tainment features. They cost between £58,500 and £80,000. 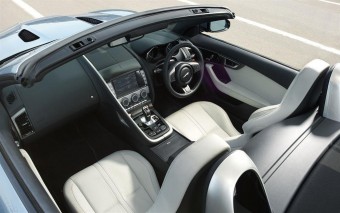 As a strict two-seater, the Jaguar F-Type is roomy yet snug thanks to the multi-adjusting and very comfortable full height seats and while oddments space is acceptable you only have room for a thong and platinum credit card in the boot, although you may wonder if you need anything else anyway once you experience the F-Type on the move.

Our entry level F-Type had the least powerful Welsh-made engine of the trio but it was still capable of delivering exceptional performance without any stress or unacceptable noise.

The enormous punch of 332lbft torque from 3,500rpm and its superbly matched eight ratios under hand meant you were never lacking for instant pickup.

Changes were slick and smooth whether going up or down the box and it proved surprisingly economical recording fuel figures of 27 to 34mpg on a few refills of its 72 litres or nearly 16 gallons tank.

Powerful acceleration and precise changes are only really effective if the chassis can cope and the F-Type did, with a lot in reserve as well.

The big wheels and tyres put down the power without drama and confidently gripped the road through testing turns over a variety of surfaces. Ridges and tarmac breaks never affected its direction. 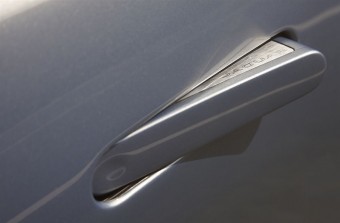 Handling was crisp and safe while the ride seemed firm at low speed it was more accommodating at higher speed and you soon felt as-one with the F-Type in your hands.

The transmission lever on the central console is convenient to use but most will simply flick the column mounted stalks to move up or down the box. Steering is pin sharp and very well weighted while the enormous brakes haul down speed without an issue or concern.

Secondary controls are also close to hand including the racing type button-start and the whole package has been beautifully integrated into the console and fascia where the simple, big instruments sit directly infront of the driver and clearly display their functions. One unusual feature was the neat pop-out door handles to aid aerodynamics (above).

Climate control keeps the interior cosy and windows clear when the hood is erect but powering down it quickly opens up the F-Type to even more enjoyment for its occupants. It neatly stows out of sight and this partly explains why the boot space is just 196 litres with the hood compartment to accommodate.

When it is erect, however, the rear vision is very poor through the back window and you really need the standard parking sensors.

There is a very pleasant exhaust note which becomes even more characterful under hard acceleration but other mechanical, wind and road noises are low or very moderate. 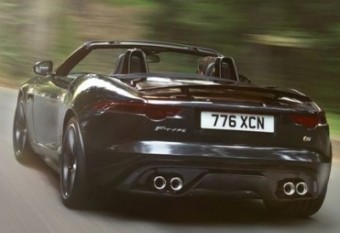 Our week in the Jaguar F-Type was arguably the best drive of the year so far, but it could be your best drive ever if you love modern British sports cars.