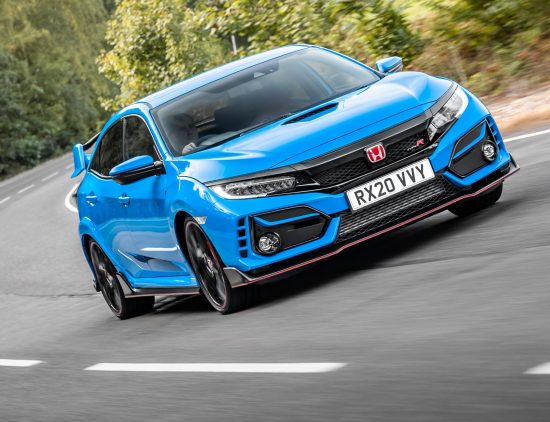 Although the UK production of the Honda Civic  family 5-door hatchback range of  models, including the hot-shot Type R, ceases in the UK at their Swindon Plant in July  this year, the high performance Type R range of models available has been extended and a wide range of spec changes and technical improvements included.

The Swindon Plant is currently building up buffer stocks of all 10th generation Civic Hatchback versions to carry them over until the next generation comes along. However as I write this the Swindon Plant is experiencing delays with the arrival of just-in-time components due to congestion at UK container ports caused by Brexit stockpiling and Covid-19 issues.

The next generation Civic is reported to be less adventurously styled and will be built for Europe in Japan.  The range will mainly include hybrid and electric versions although rumours say there will be extended production of the turbo petrol Civic Type R versions. But it’s not clear if that will be built in Japan or perhaps America where Honda build the Civic Saloon.

As a reminder, Honda in terms of car sales started trading in the UK in 1965 and they bought the 370-acre South Marston former airfield site in Swindon in 1985 to start engine production followed by Accord car production in 1992.  In its time the Swindon Plant at its peak had 3,500-employes and other just-in-time component manufacturers in the area provided hundreds of further jobs.  At its peak the Swindon Plant produced in the region of 250,000 cars a year for sale in the UK, Europe, the US and Japan and these included Accord, Jazz, CR-V and Civic/Civic Type R models.  Recently the factory has been producing only Civic Hatchbacks at a rate of around 150,000 units a year but thought to be closer to 110,000 Civics now.

That’s in the past but for the ‘today’ Honda has announced the pricing and revised and refreshed new Civic Type R range structure.  The Type R entry level model costs £32,820 and the GT and the Sportline spec levels are an additional £2,000 and the range topping Limited Edition Civic Type R is £39,995 – but all 20 units of that version have already been sold. 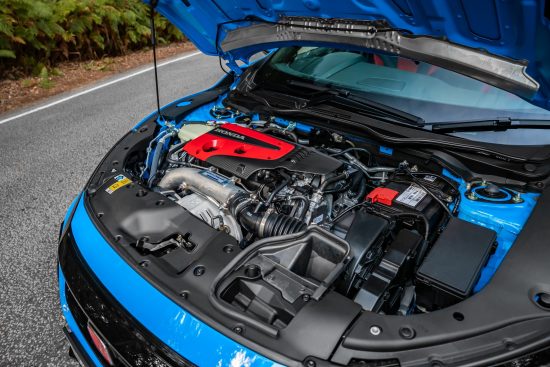 All versions have the same 2.0-litre, 4-cylinder 320hp turbo petrol VTEC high revving engine with 400Nm of torque from 2,500rpm. Drive to the front wheels is through a rev-matching sport ratio 6-speed manual gearbox with Comfort, Sport and +R selectable driving modes. Top speed is 169mph with 0-62mph taking 5.8-seconds.

Rebecca Stead, Head of Automobiles at Honda UK, said, “As with the previous generation, we are fully expecting a huge demand for the Civic Type R. The expanded family now caters to a wider demographic of enthusiasts and customers.”

In these days of uncertainties, financial ease of purchase will be a big deal for some customers so the all-important PCP finance scheme pricing has been confirmed for the new car.  Monthly payments are in line with the outgoing car and start at £339 a month on a three-year 5.9% contract with a deposit of 30% for the entry level version. 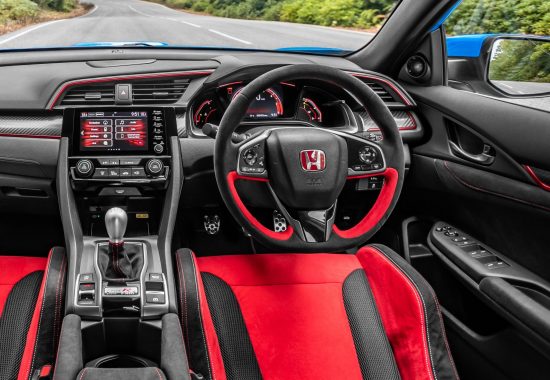 But back to the flagship Type R range and what else is new apart from the extended model line-up?  All versions gain a revised air intake system, improved cooling, two-piece floating disc brakes for increased performance, revised suspension geometry and bushings for improved ride compliance and minor cosmetic changes to the interior and exterior.

Intended for those who want the performance of a Civic Type R but in a more unassuming shell, the new Civic Type R Sportline version introduces a stealth look with a low-level rear spoiler, all-black interior and smaller 19-inch wheels with larger profile tyres.

At the other end of the scale is the sold-out Limited Edition version which was aimed at those who want the most extreme version of a Civic Type R. Only 100 of these cars were destined for Europe with just 20 for the UK. The Limited Edition features lightweight 20-inch BBS forged alloy wheels, unique ‘Sunlight Yellow’ paint and a 47kg weight saving over the standard version helped by  not fitting air-con as well as less sound insulation material.

Inside all models feature revised tactility and improved touch points with a new Alcantara wrapped steering wheel, a counterweighted teardrop gear knob and physical controls for the infotainment and climate systems. For the more enthusiastic owner there is a new intelligent Honda LogR app that allows the user to capture, log and review vehicle and driver performance data to improve track performance and of course the Civic Type R has been a prominent contender in various Touring Car Series 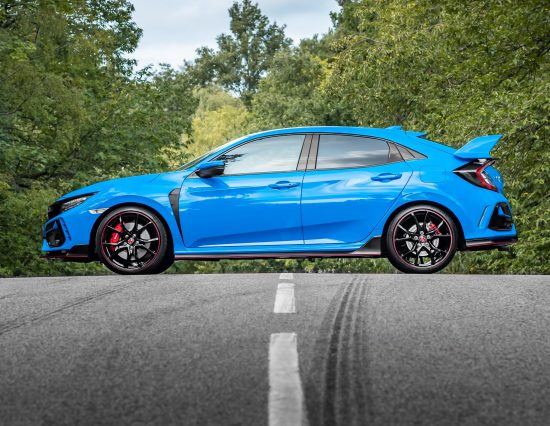 My test drive Honda Civic Type R GT 2.0 VTEC Turbo MT to give it its full title costs  £34,820 plus £859 for the Championship White pearlescent paint making an on-the-road price total of £35,670 which Pound Sterling per performance looks very good value if performance is big on your buying scale.

The high revving, variable valve timing turbo petrol engine with a capacity of 2.0-litres with 4-cylinders punches out 320hp at 6,500rpm and a very healthy 400Nm of torque from 2,500rpm.   Drive to the front wheels is through a 6-speed close ratio manual gearbox with rev-matching function that marries rpm to gearbox internals speed for slick fast notch-free gearchanges.

The 5th and 6th gears are overdrive ratios for slightly more relaxed engine speeds at cruising speeds. Torque steer is evident during hard acceleration but generally it’s hardly worth a mention and the limited slip differential does a really good job of dispersing traction evenly due acceleration take-off and on slippery surfaces.  It’s a strong engine when needed, it thrives on being revved yet in its latest form it can be impressively flexible at lower speeds. 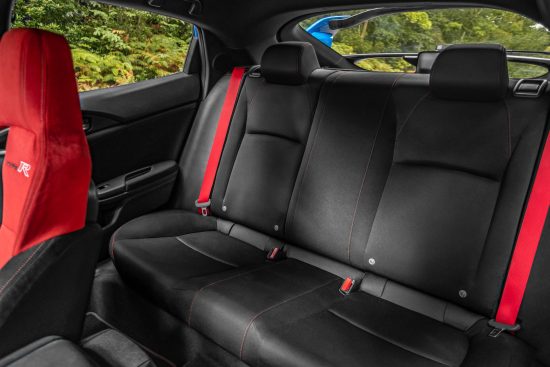 To prove it’s family-friendly the boot and load space ranges from 420 to 1,209-litres. The rear seat passengers won’t complain about rear seat legroom either, it’s very good but the coupe roof-line does restrict rear passenger headroom for tall adults and the huge double-decker rear spoiler does restrict visibility for the driver through the tailgate window.

But overall the interior is a pretty smart place with its sporty fixtures and finishings. The front sports seats provide a ‘workperson’ like environment, supportive and good at keeping the body in place during fast cornering for track-day experiences and for normal road use plus they look good as well.  The driver’s cockpit is switch-heavy, lots of them and other various controls but they are logically placed. Some tech-savvy younger buyers will see them as old-fashioned. I’d say ‘classic’, easy to use and thankfully not immersed in the 8.0-inch touchscreen which is comparatively small by modern day standards.   The DAB radio and Apple CarPlay plus Android Auto connectivity functions are all now available. 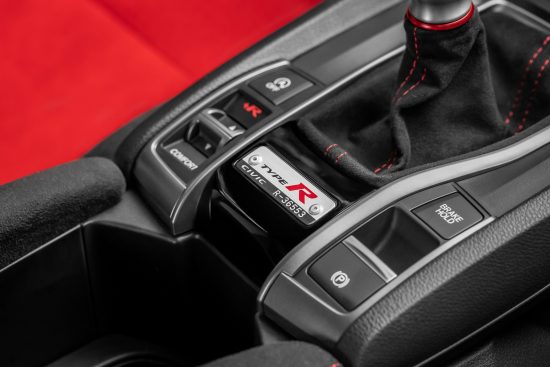 There is a driving mode selector for the  agile Sport mode, track focussed +R mode or everyday better compliant use – the Comfort driving mode.   Comfort mode was most usable most of the time giving a marginally softer ride and smoother steering feel without losing any of the car’s handling taughtness.

Comfort perhaps isn’t the best word to use for this setting as it rather suggests sloppy and soft ride characteristics which is just not the case. I’d just call it Normal or Standard mode.

The Sport mode in reality, given today’s speed restrictions and congested roads, is of minimal use most of the time but fun to have when circumstances allow. At the heart of the selectable driving modes is the revised three-chamber adaptive suspension. The dampers allow for variable damping force in tension and compression from the sports front independent and rear multi-link suspension system.

Outside the Type R styling is much the same as before, aggressive as a sports machine with lots of aerodynamic blades, vanes, fins and air cooling airflow vents and 20-inch alloy wheels for most versions. It is the styling of the tenth generation Civic Type R that has proved to be divisive for some potential past Civic owners. It has appealed to some customers, young business execs and to some more senior in age motoring enthusiasts but to the average long-term Civic owner the aggressive looks were seen as too extreme. 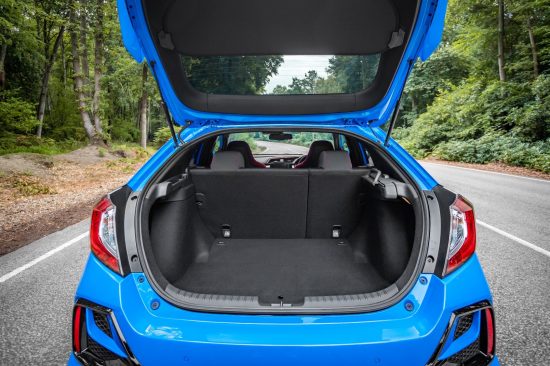 If rumours and spy images are correct the next generation Civic will have styling reverting to a more rounded, subtle and universally acceptable shape.

But for now the Type R still has the signature three tailpipes positioned in the centre of the rear diffuser. The exhaust delivers a refined exhaust note with an aggressive tone with the addition of Active Sound Control (ASC) to ‘fun-up’ the driving experience even further or to wake up the neighbours depending on which of the three different driving modes is selected.

The main tailpipes on either side of the exhaust system deliver the flow from the engine, while a unique smaller centre tailpipe controls the sonic tone of the engine. To help generate a more aggressive tone during acceleration the centre tailpipe acts as another exhaust outflow. At mid-load engine speeds the pressure in the centre tailpipe becomes negative drawing in ambient air to reduce the exhaust’s booming harmonics from entering the cabin and becoming tiresome at cruising speeds.

It might be fun to drive but the Type R is not frugal to run with high CO2 emissions pushing up the First Year VED road tax to  £1,305  and company car tax to the maximum rate of 37%.  Insurance of course is high-cost with a Band 40E rating.  As for fuel economy, well the new WLTP figure is officially 33.2mpg and my test drive average for the week was 36.1mpg. But it could have been a lot less than that if the foggy/icy weather hadn’t been against me. 26.9mpg was the average for shorter trips with a longer motorway journey providing the higher overall average figure. 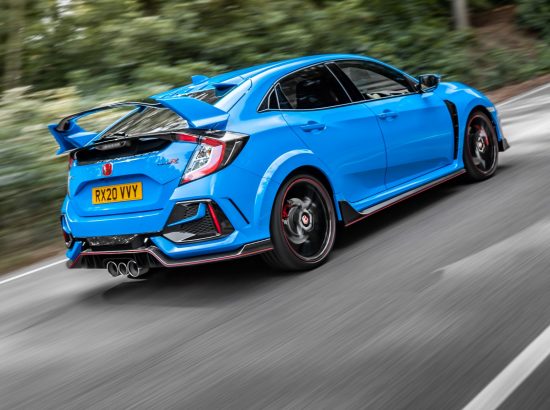 As a hot-shot family hatchback the Honda Civic Type R in its latest form offers a more sophisticated and less raw driving experience, it’s just as fast, just as taught in the handling department, the ride quality is much better and the specification improved. There is little not to like and its appeal has been broadened which should result in better sales but too late for Honda Swindon Plant’s future.