Sometimes we look forward to long journeys with trepidation and other times with anticipation, and it was definitley the latter in the Honda Civic e:HEV.

Briefly tested and impressed a few weeks earlier, a 320 miles round trip in a few hours was going to be confirmation of our initial impression or realisation we had got it wrong then.

We need not have worried, of course. The latest Honda Civic e:HEV is a very worthy successor to the previous Civic series and is a larger, smoother and more refined model by some margin.

Honda has invested a lot in the new Civic and gone to some extraordinary lengths with its engineers evaluating every aspect of the car, and it shows. It is the first Honda to use an electric transmission without gears, for example.

The Honda Civic was introduced 50 years ago and the new e:HEV is the 11th generation after 27.5 million have been sold in 170 countries, but it really is a turning point for the car maker as we embark on the new generation of electrically assisted and powered cars.

There are three trim levels, Elegance, Sport and Advance, sharing the same powertrain and are identical in performance terms so differentiate with fitted equipment. 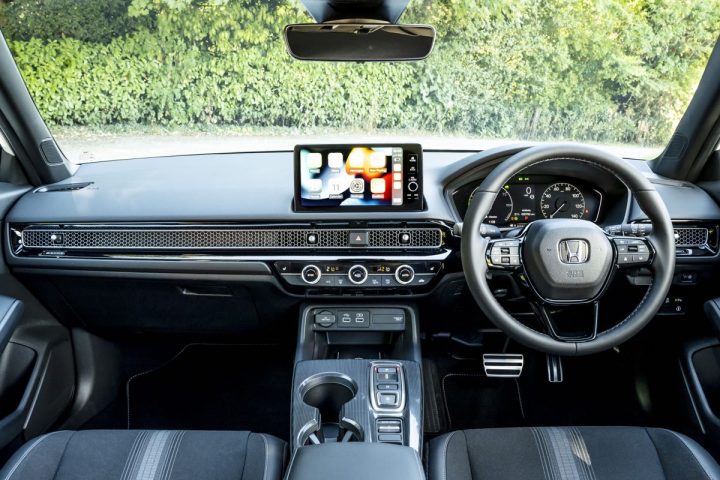 No longer built in Britain, it comes to us from the company’s Yorri Plant, Japan and is the latest model on Honda’s declared road to fully electric or fuel-cell cars by 2040, Honda has committed to introducing 30 new battery electric vehicles over the next eight years. These will include two exciting SUVs and for Honda a first time Plug-in Hybrid Electric Vehicle for selected markets and five will arrive within 18 months.

The new Civic has a longer wheelbase, wider rear track and is lower than the outgoing series giving it both a firmer foothold and improved handling as well as a sharper look.

The increased size of the new Civic and the electric motor would normally add weight to the car but it’s been mitigated utilising a resin tailgate and aluminium bonnet as well as a compact electric transmission that has no traditional gears, saving parts and servicing. 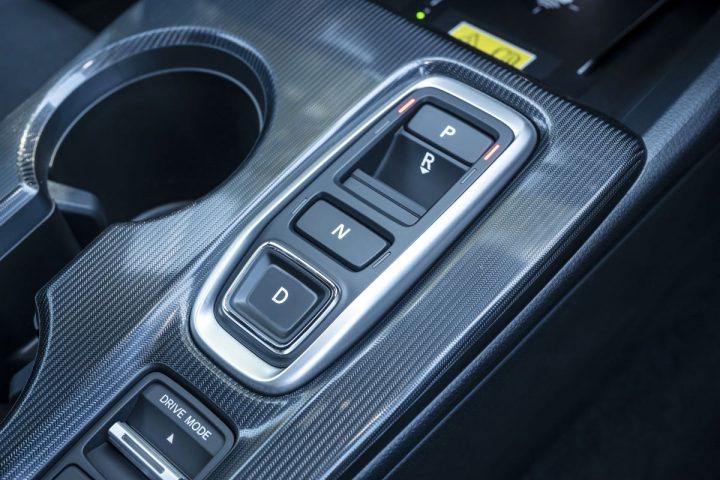 The external lines have been mirrored inside with few breaks in panels and a neat mesh panel to the face of the wide dashboard while all switches and handles have been engineered to give the best feeling to fingers for pulling or turning and pressure behind buttons.

There’s a power meter fitted into the instruments’ display instead of a rev counter alongside the more familiar speedometer. The central display is larger than in the current model and was very easy to use with separate heating and ventilation buttons beneath.

There is just a single 2.0 litre four cylinder petrol engine and pure electric variable transmission. Only the front wheels are driven and deceleration or braking generates regenerative charging back to the power battery which can add a little to the pure ev range. 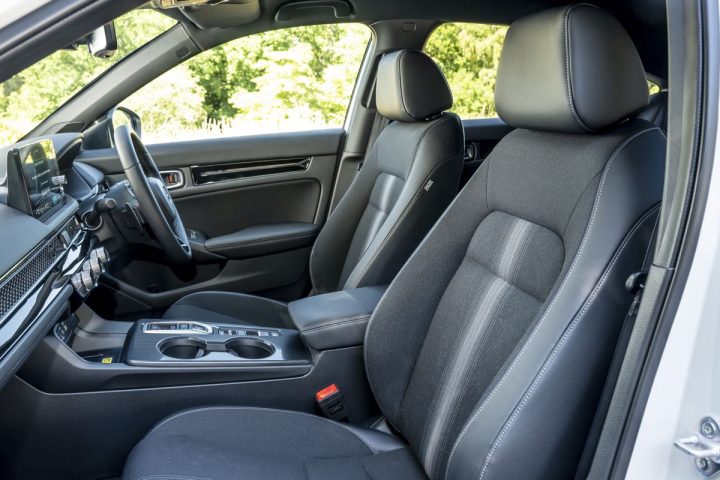 Honda engineers are enthusiasts through and through and it really shows in what is really a family hatchback because the way the power is created, delivered and put down on the road has been gives a strong driver and performance feel and there is even an acoustic engine sound to enhance that.

The suspension has a sporty feel but it’s still very comfortable over any road surface and the new monocoque structure is stiffer which helps with ride quality, reduced twisting and sharper handling. 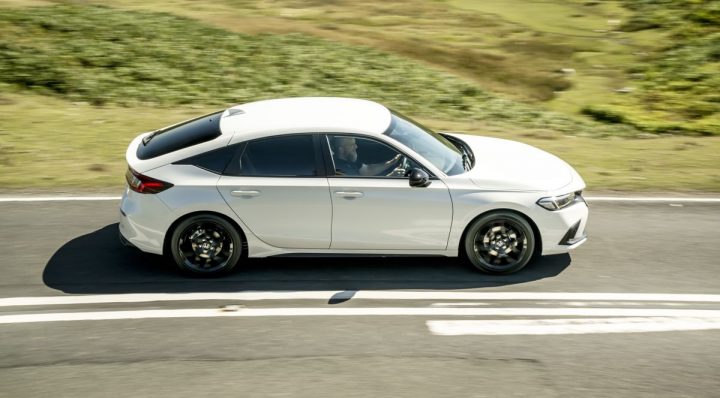 Inside the Civic e:HEV looks a class above its category with clean lines, good textured controls and very clear instruments with minimum distractions for the driver. Visibility was excellent through the windows, with a very good wash/ wipe system and long range, wide-beam headlights at night, but you need care when reversing as the high tail and thick c-pillars restrict line of sight.

Seats were extremely comfortable and had good adjustment range on the front pair, good room and were nicely shaped.

Headroom was good throughout but some taller people may find the legroom a bit short in the back. Seats have an offset split to progressively raise the luggage capacity to a maximum 1220 litres. 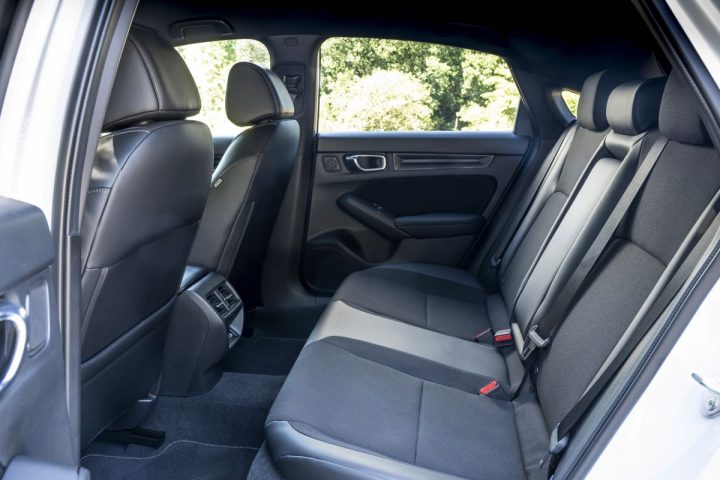 Access was good throughout and the low waistline and deep windows give the cabin a bright appearance as well as reduce blindspots but you have sensors and a reversing camera as standard. There is no sunroof on the two lower grades, but a decent sized glass panel on the top Advance grade, which also gets heated steering wheel and intelligent headlights among its trim items.

Behind the wheel, the acceleration begins with electric assistance, silent and swift, and the system decides when it needs to bring in the petrol engine, so hums in the background if extra urge is needed before switching to the internal combustion engine for longer motorway journeys.

Honda has incorporated regenerative braking so energy is pushed back to the traction battery when slowing. It all works very well and without the concern of range anxiety of pure evs..

Everything comes together very well from a driver’ viewpoint with good minor controls, clear instruments, responsive powertrain and well weighted steering, compliant suspension and strong brakes. There is little to dislike.

It’s 50 years since Honda started the Civic line and with the improvements made in the new Honda  Civic e:HEV you wonder where they will be in another five decades, but that’s a journey we cannot be sure about either, although I think it will be as exciting. 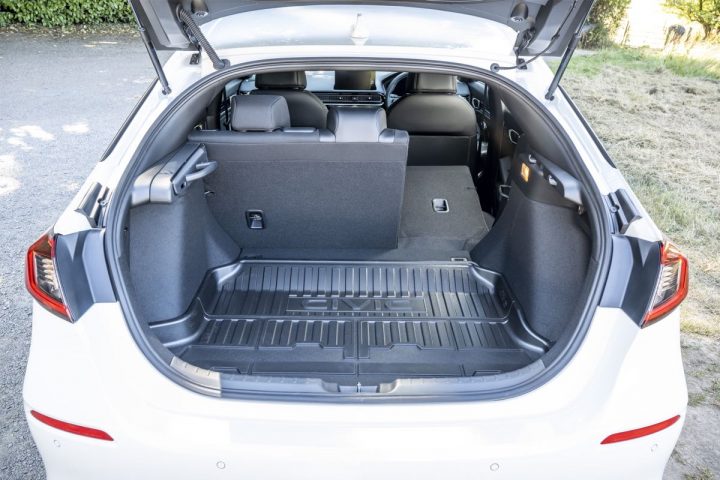