A famous name from the past will lead Ford’s fight for sales in the new all-electric age of our cars.

The venerable Mustang name has been cloned from the muscle sports car launched in the mid-60s and now in its seventh generation as the brand’s longest-lived nameplate on a family SUV. 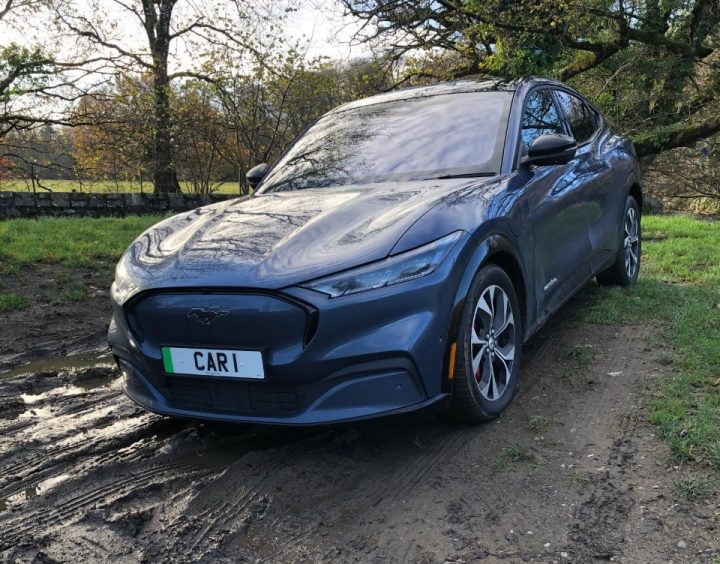 The Mustang Mach-E is vitally important to Ford and in familiar style has arrived with a choice of models based on standard or extended range batteries, rear or all-wheel-drive and software tweaked to give economy or exciting performance. Some equipment and styling changes distinguish the models to the users and viewers’ eyes and reflect in the prices from about £42,530 to £66,280. At the upper end the Mustang Mach-E becomes the highest priced model ever sold by Ford in Britain.

It is not Ford’s first foray into the electric sector because it’s dabbled before and then withdrew when it judged the market was not right for the cars and represented a questionable financial return. 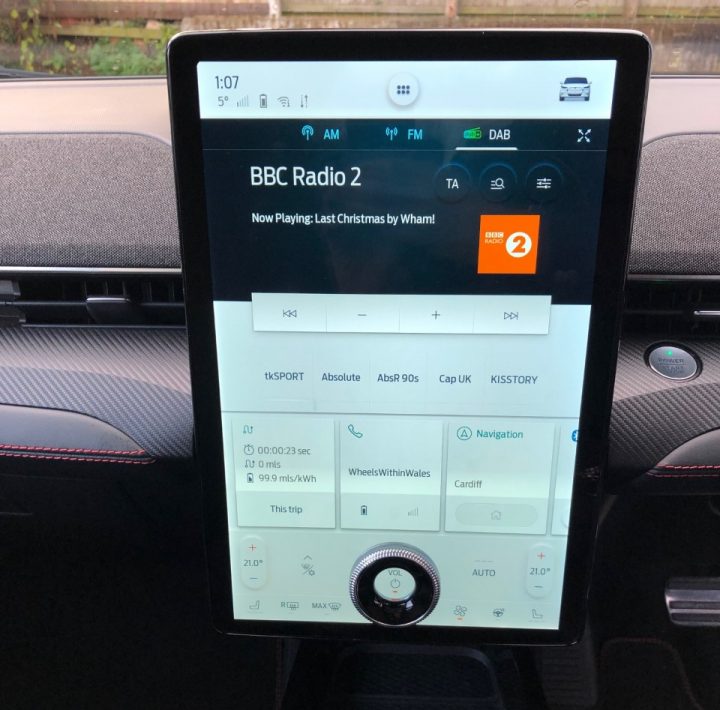 Now the electric vehicle market is the way ahead as governments mandate against petrol and diesel engines over the next two decades and Ford has decided to lead with a family friendly Crossover offering a choice of range and performance to meet individual needs. It’s probably a wise move to enter with the popular Crossover style of coupe multi-purpose-vehicle.

Our launch model had the more powerful pack under its floorpan and twin motors giving all-wheel-drive for better handling on wintry roads. It also came with a technology pack which included full-length glass roof, park assist, hands-free tailgate, B&O sound system and lane tracking among features. 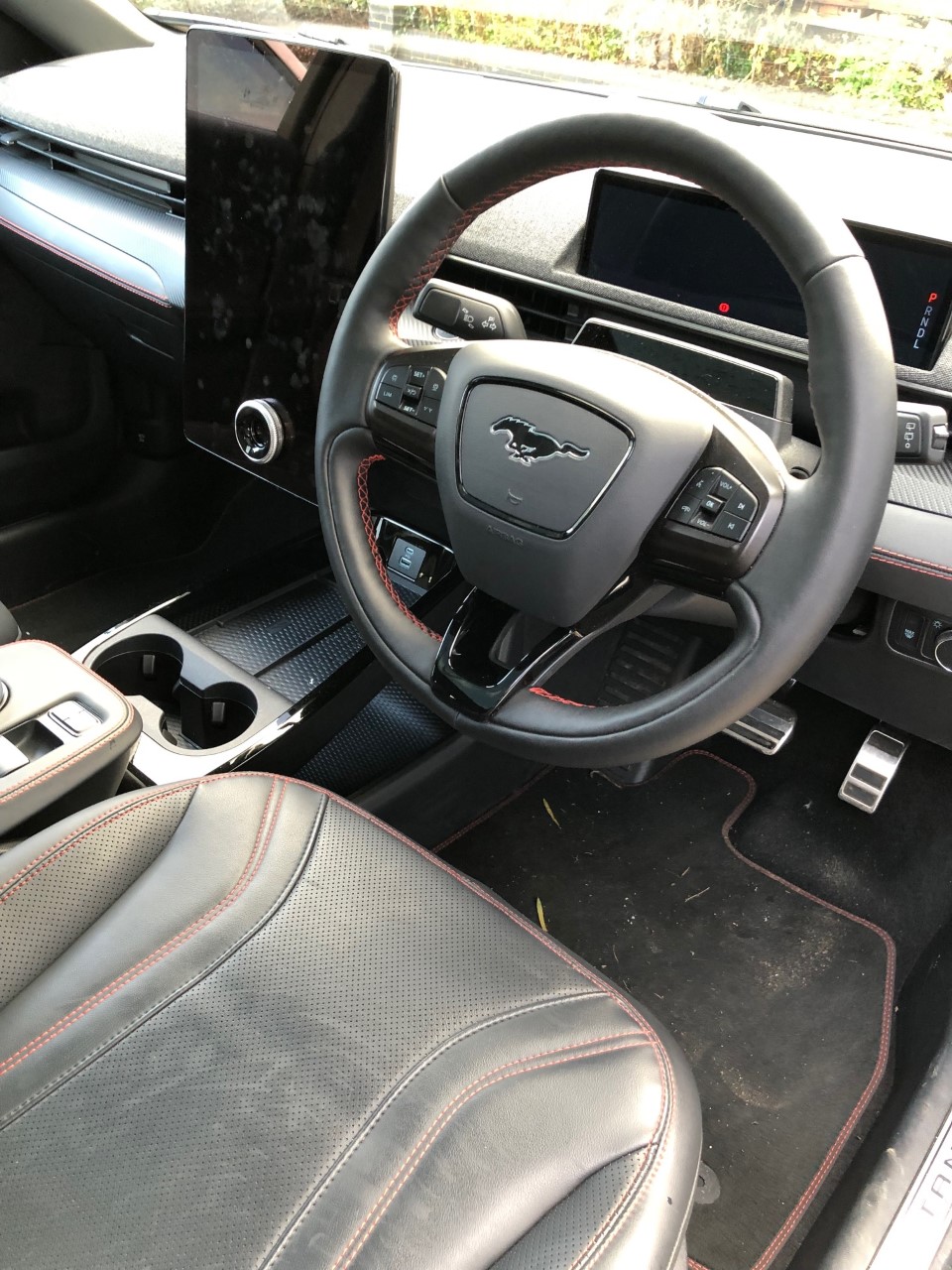 The twin motors pushed out 580Nm to give good acceleration in traffic and for overtaking but the software kept the maximum down to an indicated 111mph, well above what you legally need on motorways where it easily cruised at 70mph.

However, at the legal limit the overall range soon dropped and over 500 miles of testing we found it best to keep under 62mph and over mixed roads it was better still. Even so, we struggled to get more than 280 miles from a full charge and that’s some way off the claimed 335 miles quoted by Ford. 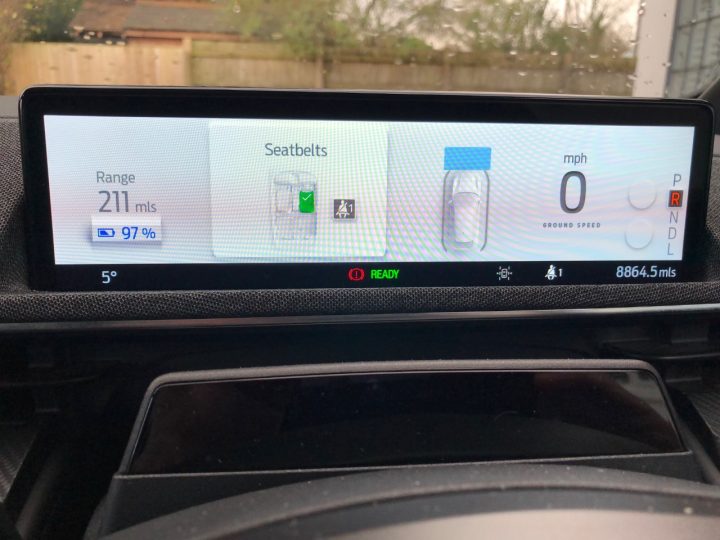 Charging was straightforward with choice of domestic and post charging cables and it would accept a rapid charge as well, which we used on two occasions. Contrastingly a domestic output took over 12 hours to fully charge but a  rapid point did the same in just  few hours, so you can make up your own minds and use networks as you wish.

The Ford Mustang Mach-E was lively and for a big mid-sized Crossover it handled reasonably well, faithfully responded to steering input and quickly slowed with electric retardation and strong brakes. The seamless automatic transmission was excellent and even had three active, whisper and untamed modes to enjoy as required.

It was a big five-seater car, filled most parking bays with something hanging over as well and it did not give the impression of being agile on tight twisting sections of country roads.

The suspension seemed poorly tuned to UK roads and struggled over anything but really smooth tarmac, probably showing its American heritage. The seats were certainly very deeply cushioned and supportive for larger users and the front pairs’ adjustment settings were generous as well so they absorbed a bit of the rough ride which evaded the springs and dampers at each corner.

The hard working suspension could be heard doing its job because the motor, transmission and wind noises were all low. 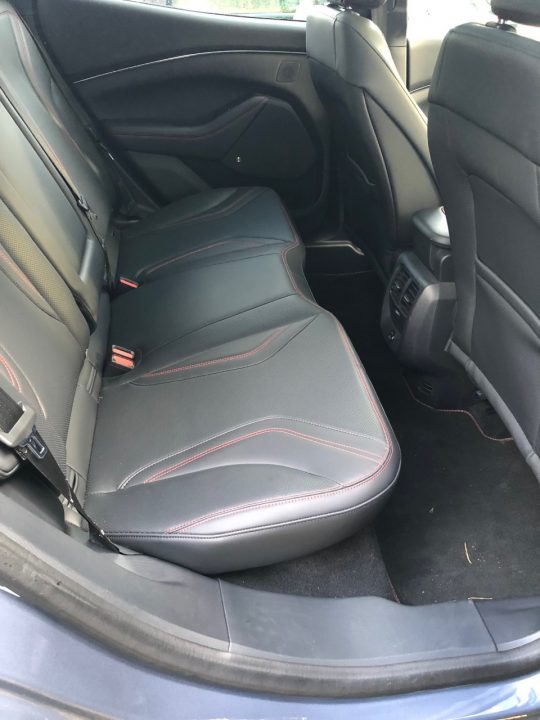 Inside, the Mustang Mach-E was a very civilized experience apart from the plush eight-way powered seating and generous room for five with luggage. The offset split back seats quickly dropped away to more than double the luggage capacity.

Doors opened wide and it was very easy to access and leave the cabin and the assisted rear door was quick and had a large aperture to easily take big items on the flat loadbed.

The smoothly styled interior was dominated by the 15.5-inch central touchscreen for virtually all the driving, comfort and infotainment features in a reference to the same set up in a Tesla. It was very big, contained a lot of features and clearly displayed them with the ability to prioritise what you wished to see, or simply hide them to be less distracting. A secondary very slim display immediately infront of the driver carried the essentials such as speed and fluid levels, navigation backup and warnings.

A heated steering wheel and seats were welcome on colder days but I was mindful of any power drain and also if the wireless inductive phone charging could also be leaking power and therefore mileage. 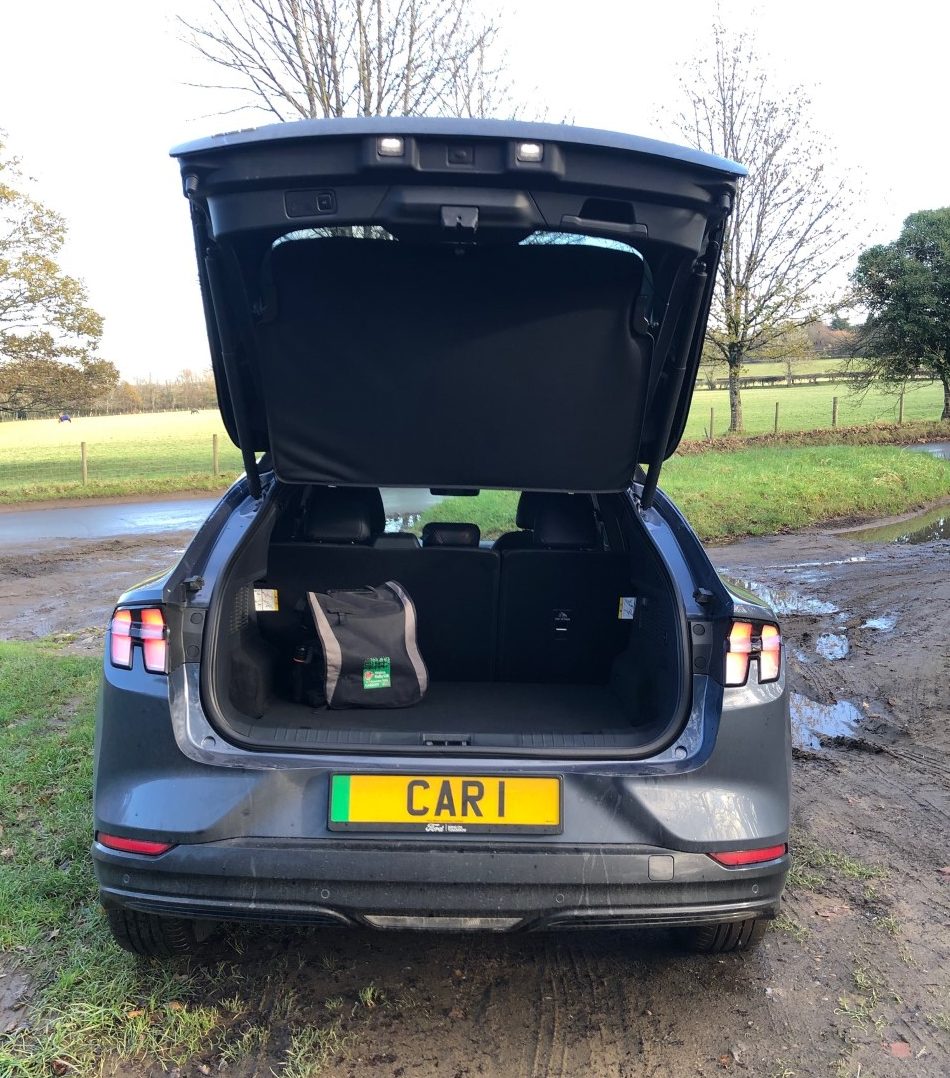 The heating and ventilation control was powerful, well directed and quiet backed up with powered door windows.

Oddments room was reasonably good for a family car even though the compartments were all on the restricted size.

Visibility was generally good to sides, very good to front with really bright LED reflector lights and big wipers but it was a narrow slit window when looking in the rear view mirror and you had substantial blindspots behind the high tail and wide c-pillars so the reversing cameras were essential. 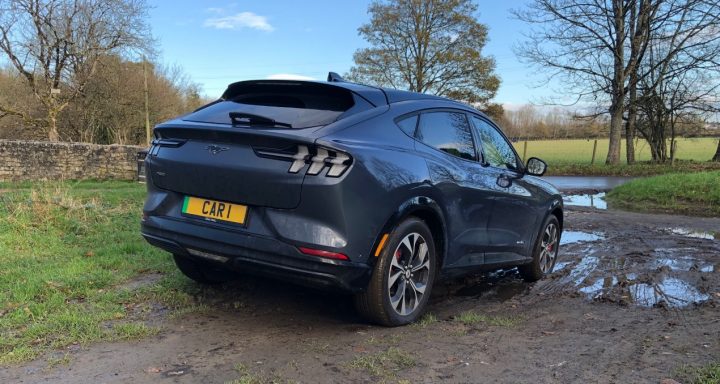 A lot of thought has gone into creating the Ford Mustang Mach-E and it is very user friendly if not as user-comfortable as it might be, but it also represents the beginning of a new journey for Ford and holds a lot of promise to be fulfilled.

For most buyers the new generation of Ford models will be perfectly acceptable against direct rivals but may not be as competitively priced so you need to carefully study the Mach-E range and select this horse for a particular course.