Ford has been a bit slow pushing into the hybrid sector, but I think it’s been worth the wait to drive the Kuga PHEV.

The highly popular SUV behind the blue-oval badge has been well designed and developed for today’s buyers of family cars who want to have as few compromises as possible but also need a good range.

The recent petrol fuel shortages meant the car’s reasonable electric only range around 30 miles would get many routine journeys covered before recharging but the reality was you could eek out more when the petrol engine was used alongside the electric motor. We saw over 74 miles per gallon at best and just under 50 mpg at worst.

The test car’s list price was a little over £38,000 but it was fitted with £2,800 of options including mini-spare wheel, inductive phone charging, advanced headlights and heads up display, driving assistance pack, detachable tow bar with electric kit. It therefore was placed outside the HM Government’s PHEV assistance grant, unless you can convince the Ford dealer to come down quite a bit to a lower OTR price.

The familiar 2.5 litre EcoBoost petrol engine pushes out 225ps from four cylinders and is surprisingly smooth if not as quiet as a six-cylinder unit might be, particularly when pressed with a lot of passengers aboard, but its tuning is intended to make the most of mid-range punch. Performance is respestable not rapid and the fully automatic CVT box takes a toll but repays with really smooth progressive action whether accelerating or slowing.

You’ll not be disappointed by the nicely balanced steering with a good turning circle and acceptable feedback and the footbrake is delightfully progressive and strong. 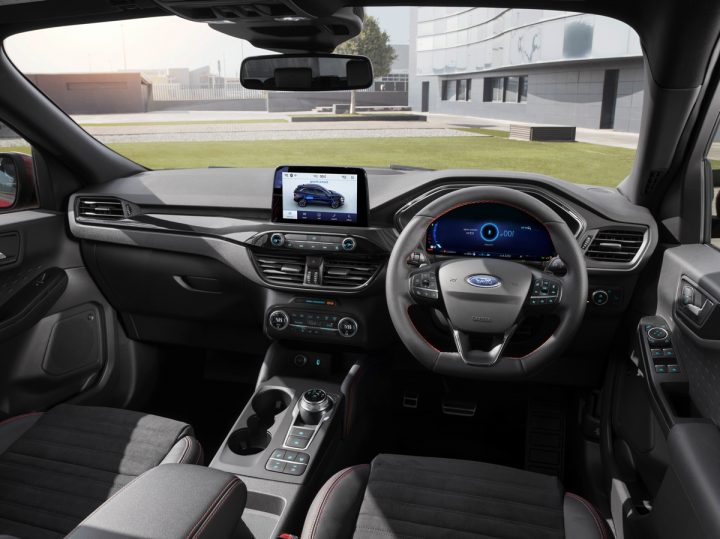 Secondary controls around the column, on the wheel-spokes and close to hand on the fascia are also clearly marked and worked well while the essential dials infront of the driver were big and clear at all times and split by a multi-mode computer display including audio, navigation, entertainment and driving data.

A larger central display showed the map and navigation settings, mobile phone, music and entertainment as required and buttons below covered the basic climate control options, fans and distribution. All were quick to use and worked well. A large sunroof and powered windows gave further options.

Oddments room was very good throughout with door recesses, big glovebox, central trays and console bin and a number of power points for all users front and back. The access to the rear floor was excellent with a remote blip to open and close the fifth door and the space was sensibly high and shaped with a dramatic increase possible if the rear seat-backs were dropped but they did not fall completely flat.

Front and rear doors opened wide, access was good and once inside the room was good for six footers with adequate head and knee-room and it would just take three abreast in the rear. All the seats were very well shaped and comfortable with plentiful reach and rake movement on the front pair.

The dual-zone climate control kept the interior at a desired temperature setting without any issues. Front and rear seats were heated as was the steering wheel on the test model.

Ford’s excellent quick-clear front window system is supported by a very good air conditioning system and rear window heating, massive effective wipers front and back and some of the brightest ‘intelligent’ LED headlights you will find on any car which automatically dip and don’t dazzle oncoming traffic while lighting up the verges and bends and have a long range in the countryside. 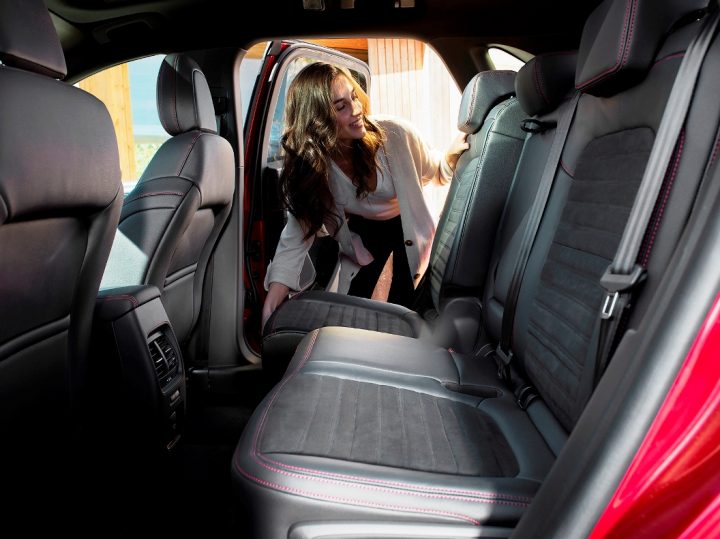 The Kuga’s handling is failsafe and faithful but not as sharp as some might like and the fact it’s front wheel drive only and not all-wheel-drive will cost it some buyers who want better traction on wintry roads. It rides well over most roads but you can hear how hard its working as noise suppression is not good.

The engine rumbling away is only really noticeable at higher engine speed while wind and other mechanical sources are very muted.

Practical tasks such as recharging are quickly accomplished with a nearside front wing point and Ford has sensibly included domestic as well as rapid charge cables which some rivals do not offer or want a lot of money for so its worth asking if considering another challenger.

The Ford Kuga ST-Line X Edition PHEV is mid-range but really a high quality choice and a sensible one if fuel supplies are going to be an issue going forward. It answers so many questions and could be the answer to many prayers.