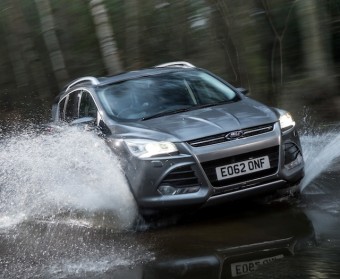 The all-new roomier Ford Kuga introduced at the start of this year has continued their engine down-sizing policy for better fuel economy and lower CO2 emissions and replaced the aging 2.5-litre engine with their latest technology1.6-litre EcoBoost four cylinder turbocharged petrol engines with power outputs of 148 and 177bhp.

The 2.0-litre, 138bhp and 160bhp diesel units have also been revised for better fuel economy and less taxing CO2 emissions.

Whereas only 5% of UK Ford Kuga buyers opted for the 2.5-litre petrol unit in the previous Kuga, Ford thinks up to 30% of customers could choose the new fuel efficient 1.6 petrol engines.  The introduction of petrol engine EcoBoost technology has reduced fuel consumption by 25% over the old 2.5-litre unit and the TDCi diesel engine has also seen fuel economy improve by 10%. As before the Kuga is offered in two and four wheel drive form depending on the engine chosen.

With the introduction now of the 1.6T EcoBoost petrol engine starter-prices of the Kuga range have fallen from those of the old 2.5-litre petrol versions.  The range now starts from £20,900 for the Zetec specification version with the 1.6T EcoBoost 148bhp engine, front wheel drive with Start/Stop function as standard and CO2 emissions of 154g/km so VED road tax is £175.  The previous 2.5-litre petrol engine churned out 234g/km of CO2 so VED road tax would now cost £840 in the First Year rate reducing to £475 for the second year onwards of registration.

The specification levels are currently Zetec, Titanium and Titanium X and due to customer demand for even more options Ford revealed last week that they will introduce a new top of the range Titanium X Sport level of specification.

Sales of the previous generation Kuga in the UK averaged around 10,000 units a year in a growing market sector, which were 3,000 units a year more than forecast. The new Kuga for 2013 is expected to reach at least 12,000 registrations this year.

Oliver Rowe, Ford of Britain’s Product Affairs Manager said, “The previous generation Kuga saw 75% of customers opting for Titanium or Titanium X specification and with new Kugas this has increased to 87%.

“Around 96% of customers added further options of around £2,000 per unit, new Kuga has seen this go up to 98% so it makes sense for us to add the new higher level Titanium X Sport to the range to meet this demand for higher specification models.”

One of the biggest issues automotive manufacturers face is convincing customers engine downsizing works, bigger doesn’t any longer mean faster or better.  In today’s economic climate making fuel go further with less tax gathering emissions is vitally important, but not at the expense of performance.

I have just had a brief drive in the Ford Kuga 1.6T EcoBoost 148bhp, six-speed manual with front wheel drive but with Titanium specification so the price was £22,550.

With the lower Zetec spec model with the same engine it would cost a headline grabbing £20,900 which is really competitive in this fast growing market sector and £1,000 cheaper than the 2.0-litre diesel Zetec with front wheel drive.

The bulk of new Kuga UK sales will remain 4×4 models so the new 1.6T EcoBoost 177bhp version with automatic transmission as standard starts all wheel drive models off at £24,655. Country folk are likely to stick with the 4×4 option because of adverse weather in Winter and worsening road surfaces all the year round.  But urban users who fancy the much improved and more stylish new Kuga for use as the daily family delivery vehicle and for holiday duties can easily live with just two wheel drive.

The base Zetec specification is hardly basic having most essential items of spec and with the 1.6T 148bhp new engine this Kuga version at £20,900 is really appealing. However the Titanium version with the same engine provided by Ford for testing is a shade more and still good value in this market sector priced at £22,550.

Before I get on with telling you what you get for your money, the fundamental point of this road test is; can a 1.6-litre turbo petrol engine cope with powering a mid-sized SUV even if it only has front wheel drive?

Ford is of course not alone having gone along the downsizing path of getting more power and better fuel economy with lower CO2 emissions out of small capacity engines.

Getting the public to believe down-sizing is not a reduction in performance is not easy, especially in the SUV segment.  However this 1.6-litre, four cylinder turbocharged petrol unit with 148bhp delivers 240Nm (177lb ft) of torque from 1,600rpm.   Top speed is 121mph and zero to 62mph takes 9.7 seconds.  Drive to the front wheels is through a slick 6-speed manual gearbox.

As for fuel economy in the Combined Cycle this is 42.8mpg but on my test drive using a short motorway section as well as winding country lanes the figure was 32.5mpg.

A longer run should improve that but it was still a significant 10mpg lower than the published figure.  With emissions of 154g/km VED road tax is £175 a year, competitive in this segment.

As for driving performance, if the engine is kept within the optimum power-band, above 1,600rpm, it is responsive thanks to the turbocharger boost. Drop below those revs, say climbing a hill in a high gear ratio or turning into a road at a junction at low engine speed, the response can be sluggish until the turbo boost arrives and spins in the power.  On the open road the engine allows the Kuga to cruise along in top gear happily at high speeds. 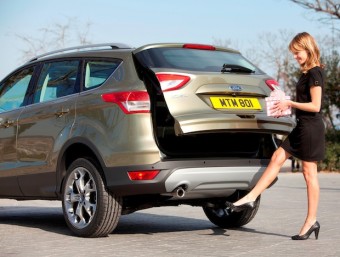 In all other respects, sharp handling, agility and ride comfort this particular Kuga impresses just as much as more powerful versions but it is the price that impresses most.

The Titanium specification offers most of what most people want but Kuga buyers do tend to go for higher level models despite the fact they are going to pay more.