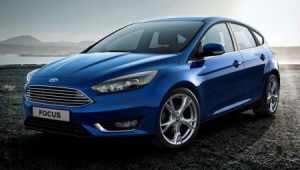 There is now even more to love about Britain’s most popular family car, the Ford Focus.

Second in sales last year to Fiesta, Focus has been revamped for 2015 with changes to the powertrain, chassis and interior as well as some subtle external mods.

At the new model’s international launch last autumn we were unable to drive the Bridgend-built 1.5 EcoBoost petrol turbo, but we have now and it’s impressive.

Outwardly and inwardly a big step up from the previous series in terms of looks, feel and equipment, the powertrains are overhauled and Focus is the first to get the new Welsh-made powerhouse.

Although smaller capacity than the previous 1.6 EcoBoost, the new engine is cleaner and therefore a better tax proposition for business users who will comprise the majority of drivers and its seven percent more economical as well.

A week with the new Focus 1.5 EcoBoost showed it lacks nothing where it matters and the rest of the 2015 changes have significantly improved the driving experience. 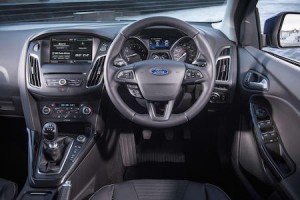 Revisions to the fascia have cleaned it up and put Ford’s newest info-tainment technology infront of the driver and passenger with better connectivity and clarity, both in vision and audio.  The new 1.5 EcoBoost is very eager and willing to perform with six gears underhand it is lively and quiet while the clutch and gearchanges are both silky smooth but it struggled to move into the mid-30s for fuel.

Underfoot the brakes have a delightful balance with assistance and effect and it turns very smoothly and with agility in town or on winding country roads.

As if these are not good enough features, the latest Ford Focus also rides much better than before even if the road noise lets you know how well it’s coping. 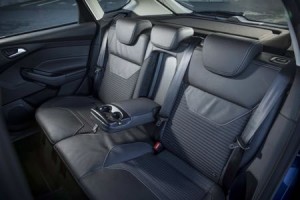 Ride quality is very good without affecting the sharp handling and there is room for five and a lot of luggage with very easy access, shaped seats and good visibility thanks to big windows and wipers, powerful lights and sensors to assist you precisely park.  Our test car was fitted with £2,500 of extras which pushed up the price from the standard £23,520 but you’d have to decide if you wanted it all.

Up front the engine was utterly composed on motorways and main roads, responsive on secondary roads and its auto stop/ start was immediate. 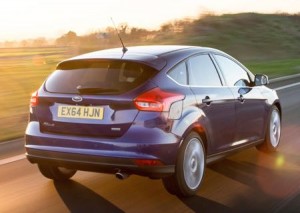 There was a noticeable improvement in economy when used one-up but overall we saw 34mpg.

I would think a lighter throttle foot would see this pass 36mpg on a regular basis and possibly head towards 40mpg.

Once or twice we recorded 38mpg but only for short periods.

The real refinement in the new 1.5 EcoBoost is its smoothness and quietness rather than its consumption.

In fact, the powertrain changes perfectly complement the other mechanical improvements and must give the Focus a strong start to this year after a very good one in 2014.