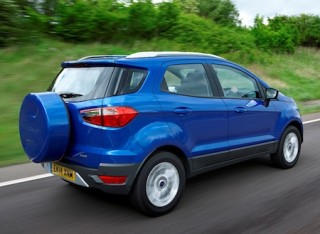 The Ford EcoSport has entered what is likely to become one of the most keenly contested of the emerging new car sectors, the small SUV.

Fiesta-based EcoSport looks fit for the fight and comes with a lot of technology under the body and inside the cabin.

The front-wheel-drive only powertrain is a good mixture of the award winning powerful 1.0 EcoBoost three-cylinder equivalent in area to an A4-paper sheet and a shortchanging five-speed manual gearbox, while a six-speed automatic is also available only with the 112ps 1.5 diesel. This may become more widely available in due course.

The boosted 1.0 litre is a very easy and free-revving unit with modest noise level until it hits the upper range when it sounds more frantic and it returned a reasonable near 40mpg on test, but still a long way off the official figure. But I was happy with what I had over a fair mixture of roads. 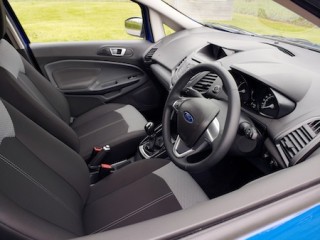 The light clutch and neat changing manual box made easy work of town driving and relished being let out on a leash along country roads.

The brakes were really well balanced for feel and power to slow it quickly but undramatically and the brake held it on a steep slope without any slippage.

I liked the positive agility of the EcoSport in town when manoeuvering through traffic or turning, but its high waistline and haunches as well as the absence of parking sensors were a real minus point in a multistory car park with people moving around as well. Certainly not the sort of issue you want to have outside a school.

All the secondary controls were sensibly placed and worked well from the stalks to the fascia switches and the simple main instruments were very clear infront of the driver, but contrasted with the small and difficult to read multi-function display in the centre of the dash above the bank of infotainment buttons.

A very good comprehensive air conditioning system was backed up by powered windows front and back, lights were bright and wipers effective.

Loading big items into the back was easy if the capacity was not brilliant when four or five up and the occupants could easily climb in and had reasonable room in the back and more infront.

Seats were well shaped and supporting with the front pair have good adjustment range.

Ride quality was slightly firm but not uncomfortable unless you crossed a really bad surface when it would jiggle about and its roadholding was safe and handling responsive. For a comparatively tall vehicle it fell very stable taking corners at speed or suddenly changing direction.

The Ford EcoSport has a cheeky charm to its character, sits well within the range and is possibly the best of the new breed of small SUVs now available.