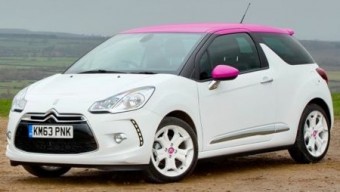 Under recent plans announced to revive Peugeot-Citroen’s global fortunes, around 40 models will be deleted from the combined ranges by 2020 as part of the Group’s recovery programme.

Targeting profitable segments in future the design-led DS series under Citroen’s banner will become a brand in its own right.

Citroen in the UK in fact are coping quiet well with 78,358 sales last year, an increase of 6.4% over those in 2012 and they are a further 9% better for the first three months over this year compared to the same periods last year.

One of the main reasons for the increase is their DS ‘designer’ versions, in particular the DS3 three door supermini sized hatchback and the two door cabriolet variant.  Together these two body styles resulted in 20,480 UK sales last year with the hatchback being by far the more popular.

Apart from its chic styling and sporty performance the DS3 has proved popular because of the personalisation options and one of the latest is the DS3 DStyle Pink and DSport Pink.  They are available with white and black body colours with fuchsia pink coloured roofs, pink tops to the door mounted mirrors, wheel centre caps and a fuchsia pink dashboard and colour coded gearlever knob. 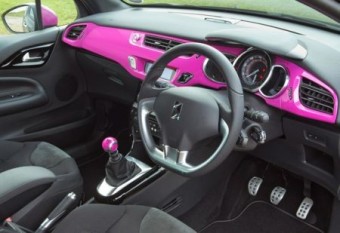 The DS3 DStyle Pink is available with either a VTi, 1.6-litre 120hp petrol engine or a 1.6-litre e-HDi 90hp Airdream diesel unit. Buyers of the DS3 DSport Pink have the choice of a punch 1.6-litre THP 155hp turbocharged petrol unit or the frugal 1.6-litre eHDI 115hp turbodiesel; and both of these units are mated with 6-speed manual gearboxes.

I have just had a colourful driving spell in the DS3 DSport Pink with the well known 1.6-litre THP 155hp turbocharged petrol engine priced at £17,800.

This unit is used in other Citroen/Peugeot models as well as the MINI range of course.  It is well liked because of its punchy mid-range performance and its 133mph top speed.

It is exceptionally responsive but it is more impressive supplying immediate overtaking power mid-range without having to change down the 6-speed gearbox.  Just as well because the gearchange was on the notchy side.

The CO2 emissions are 135g/km which means VED road tax costs £130 a year and company car drivers going the Pink route will pay 20% Benefit in Kind tax from April this year. 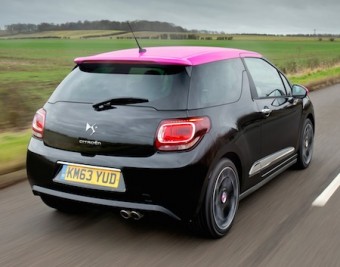 The Citroen DS3 Pink makes a statement, probably it’s a ‘look at me’.

In all other respects the DSport Pink is the same in the seating and driving compartments as other sportier version of the DS3.  Its three door chic styling is appealing, it’s roomy in the front but with very limited rear seat legroom; it’s really a 2+2.

It offers sharp steering and nimble agility, sharp handling but the suspension is quite firm giving a ‘crashy’ ride at times.  The rear quarter visibility due to the window design is very poor so coming out of road junctions needs extra care.

Against:  The pink coloured bits will not appeal to everybody, crashy ride, poor rear quarter visibility, notchy gearchange.