As the UK Government maps out a motoring future of only electric cars on our roads, the Citroen AMI will be coming to a kerb near you in 2022.

AMI is the product of Citroen’s advanced design studio, engineered by Altran Technologies and is assembled in Morocco. Whatever your opinion of this quadricycle city-car it has attracted 14,000 UK drivers who have registered an interest and some 1,400 keyed in £250 refundable reservation fees. 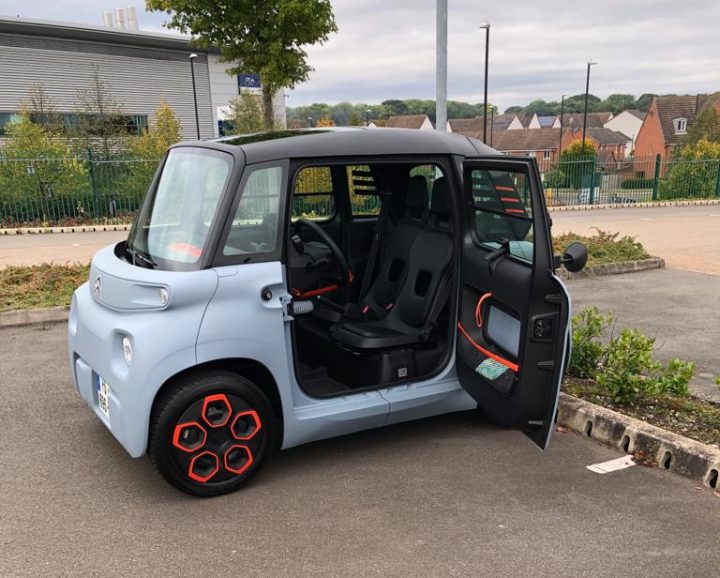 It’s built only in left-hand-drive for the purpose of being an inexpensive city car and in France it retails for under €7,000 which gets you a two-seater with 6kW motor, 5.5kWh battery which recharges from its on-board tether in three hours and gives a 46 miles range with maximum speed of 28mph.

Users cannot access the battery, motor or other components and merely have to keep the washer bottle topped up from inside the two-seater cabin. Front and back ends are identical save for their red or white lights, the doors are interchangeable hinging at the rear for the driver and front for the passenger and the interior features are basic with an audio option. 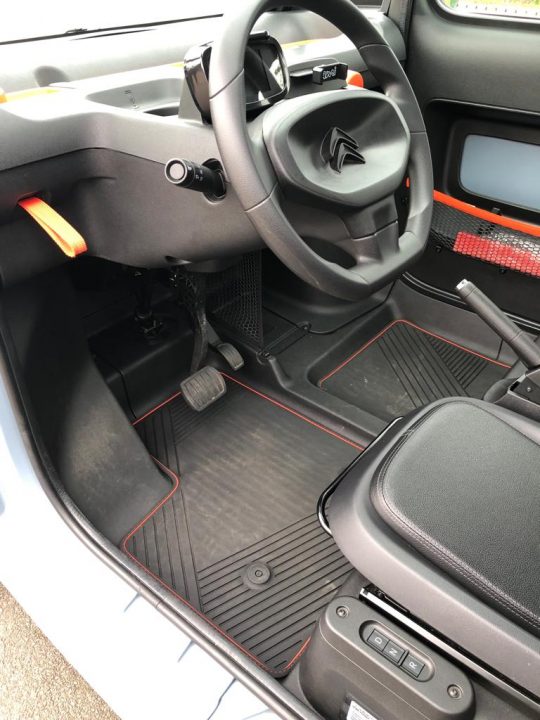 Thin seats are reach adjustable for the driver but fixed for a passenger and a 400-litres AMI cargo will be coming which does away with the passenger seat as an urban delivery vehicle. For now there is room in the passenger footwell for a small weekend case or shopping with a large hook to hold a bag as well as a bit of space behind the two seats for jackets and suchlike. 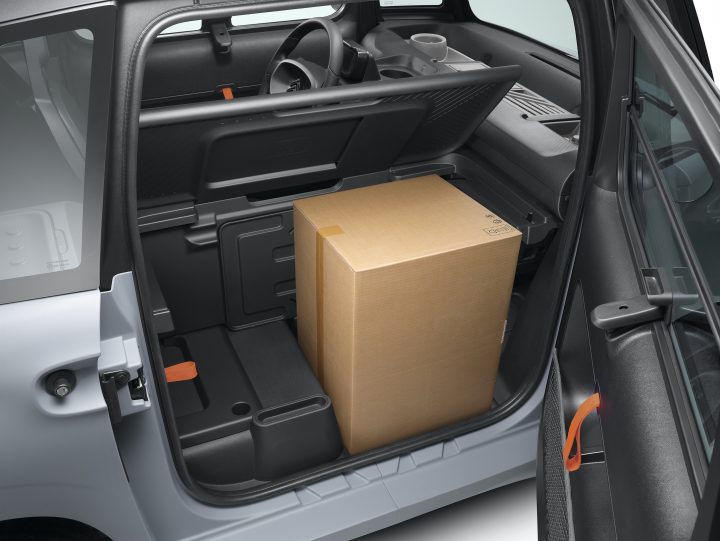 The interior is utilitarian dark plastic which is easy to wipe or hose out and parts of its skeleton frame are exposed around the large glass fixed roof.

The same moulding for the ends means a garage has fewer parts to stock and simply inserts the correct lights, and it’s the same with the doors, which also get the flip-up windows so familiar in the famous Citroen 2CV and its Ami brother from the 1960s.

Everything about the AMI visually sets it apart from anything else on the road but it really comes into its own when driven. Starting is simple on a conventional key with a panel of buttons to the left of the driver’s seat to move from park to forward and reverse and you depress the throttle to move off.

The throttle on the test car was not particularly smooth but the brakes were good and helped by the natural retardation from the motor when decelerating. Most impressive was the very tight turning circle, ideal for busy urban use.

We drove it around some residential streets and onto an A-road and it easily kept up with the prevailing traffic and had enough quick response to make the most of gaps at roundabouts and suchlike.

There are no gearchanges, just a consistent flow of power, but it does have a conventional handbrake for simplicity if not boy-racer handbrake-turns.

With little insulation, the boxy shape and hard surfaces inside mean the road and suspension noise levels can intrude but they decrease once you slow down.

There’s plenty of adjustment range on the driver’s seat even for a six-footer while both seats are hard plastic with a thin cushion to sit on and that means there is little to smooth out road bumps which come through from the short wheelbase platform. 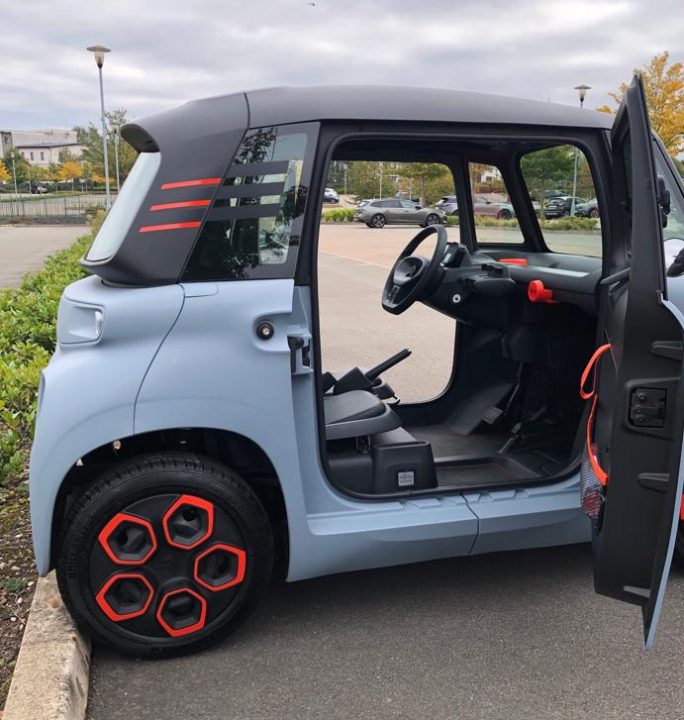 Access is excellent if a little different for most drivers using the so-called ‘suicide-door’ opening on the left hand side but passengers get a front hinged door. It does mean the driver always gets in or out on the kerbside.

Visibility was very good all round, essential in a city car, with a simple wipe/ wash system but there was no opportunity to evaluate the headlights or demisting.

It was a very agile car and easily parked with two AMI in the length of a regular car bay and eased between parked cars in streets with a 7.2m turning circle.

You are aware of its city suspension when you encounter road-bumps, potholes or just bad bits of tarmac and the AMI jerked about, but between these the ride was acceptable. Body roll was barely noticeable and it didn’t dip or pitch under braking or acceleration.

I can see a market for the Citroen AMI if they price it well and the public charging network can support its urban use but it’s strictly a commuting car, delivery vehicle or hire car.

It’s more user friendly than the two-seater Renault Twizy from ten years ago and still in production in South Korea but probably not as practical as the Ford Think City of the early 2000s before they gave up after just two years.

Our friendship with the Citroen AMI just might last a good bit longer.