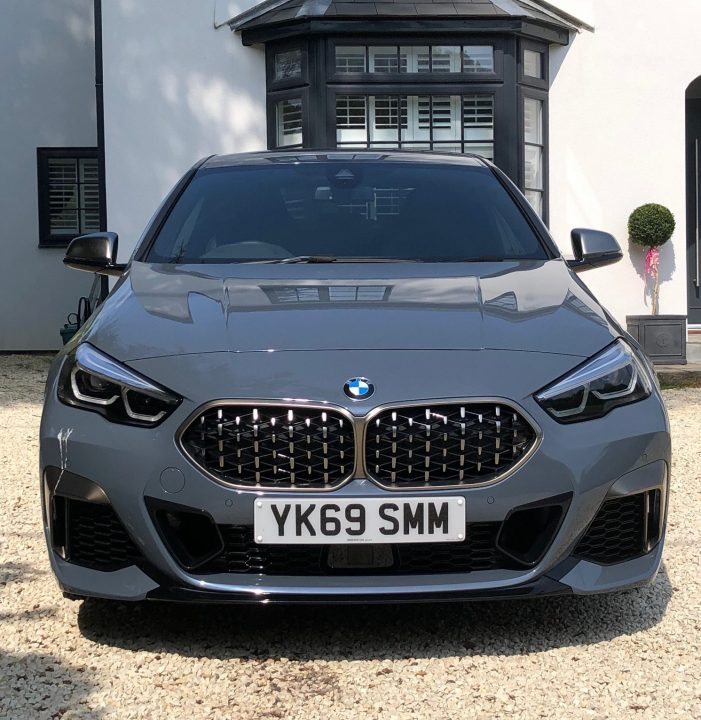 BMW has never been afraid to go out on limb when it comes to models or styling and it’s generally worked in its favour like it should with the 2 Series Gran Coupe.

Announced at the end of 2019 and with a UK launch delayed in March by the Coronavirus epidemic, the newcomer is just getting out to customers.

After the 6, 4 and then 8 Series Gran Coupe models, this completes their line up and as the baby in the range it is developed from the latest FARR platform underpinning the more familiar 2 Series and X2 as well. Essentially it’s a four-door saloon with a sweeping c-pillar and frameless side windows in the doors, so it has a traditional boot but with a smaller opening than a hatchback yet still a good expandable luggage capacity inside. 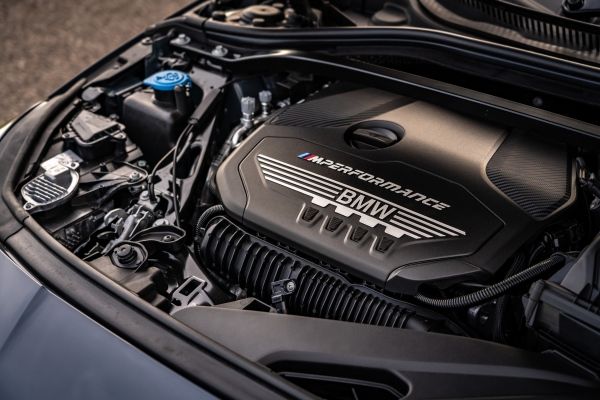 There are just three models in the 2 Series Gran Coupe range, a 190hp 2.0 diesel and 140hp 1.5 litre or 306hp 2.0 litre petrol, and only Sport or M Sport trims, based on a front wheel drive chassis. Our top of range test car included about £5,100 of options such as the Comfort Pack2, M235i Plus pack, Technology Pack, Driving Assistant and intelligent Active Cruise Control.

Pitched against sporting coupe rivals from other German manufacturers, the BMW 2 Series Gran Coup is not a shrinking violet led by its oversized grille and on the M235 its even larger coloured air vents and 3D inserts staring into your mirror. It’s fitted with large lights front and back and a bootlid slim spoiler. 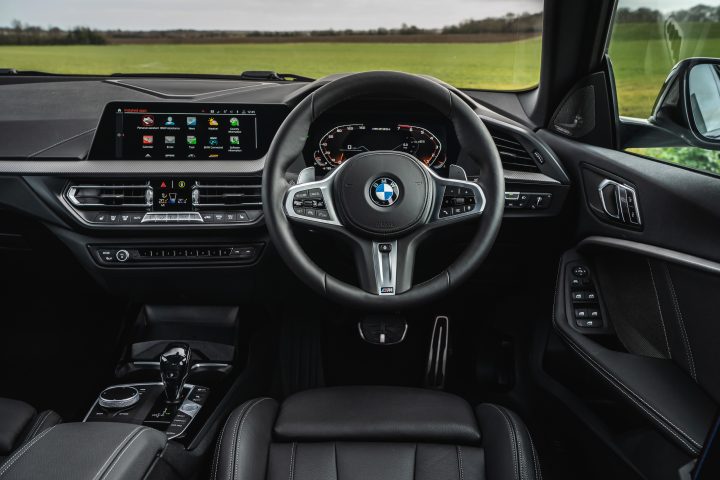 Fitted with the most powerful BMW four-pot engine utilising twin-turbos to extract maximum performance at low and high revs respectively, it pushes out 450Nm developing from just 1,700rpm.

Challenged to utilise this power in what started out as a front wheel drive chassis, the BMW M235 embraces intelligent all-wheel-drive with a Torsen-diff in the eight-speed gearbox and the familiar xDrive system at the back wheels. It’s very effective.

The power delivery is almost instantaneous with a slight lag underfoot, very swift and smooth automatic changes, but you can also bring in paddles on the column if preferred. I found the steering very slightly dead in the central position but its feedback improved through corners and the M235 gripped very firmly and abruptly stopped with massive brakes behind each wheel. The electric parking brake was very effective on our usual test hill. 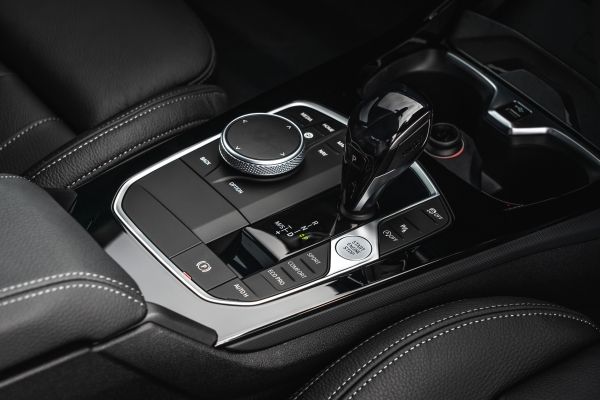 It’s rapid from rest, packs a punch when overtaking and really makes a nonsense of the legal maximum. The abundance of power builds confidence and means it can cover long distances without any mechanical or driver stress. We saw a low of 23mpg and high 34 before the overall consumption settled at 31mpg and it really paid to select the preferred modes of sport or eco.

Where-ever you go the M235 was very comfortable to sit inside. The expectedly firm suspension was not hard but it did transfer some shocks to the inside while the well shaped and locating seats with lots of adjustment were welcome. 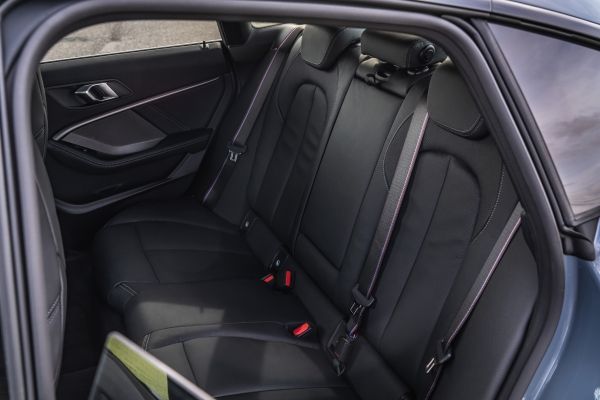 Leg and headroom was excellent infront, slightly less for tall people behind but access was easy throughout.

The visibility was very good with a low waistline, very bright far reaching headlights and two of the best wipers and powerful wash system on any car of this size.

The car’s air conditioning system and climate control was comprehensive, quick and effective to clear the windows and warm or cool the interior as desired. It was separate to the 10.25-inch touchscreen for the enormous range of driving systems, infotainment and communications. It did need some study to operate, was not as intuitive as rivals and I would hate to pay for any repairs if something went wrong. 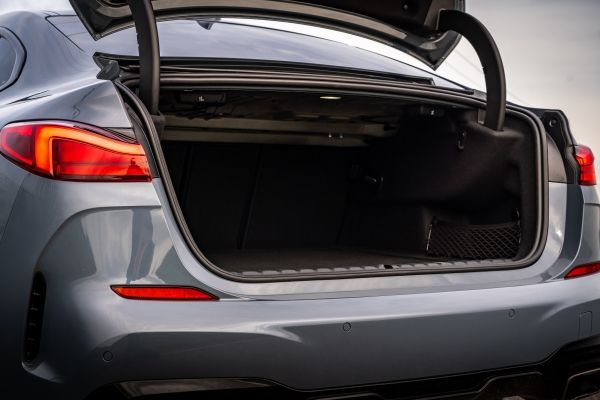 Infront of the driver is another 10.25-inch screen for main instruments, which can be customised and prioritised and is very clear but which also needs familiarisation to quickly read due to the wealth of data displayed. The secondary controls are all close to the driver on the wheelspokes, column or fascia and console.

In a family or well-used car the oddments room matters and the M235 has many small compartments but nothing of really generous proportions. The boot is easy to load and while not high it is wide and long to take a few cases for a weekend with a couple of compartments as well. 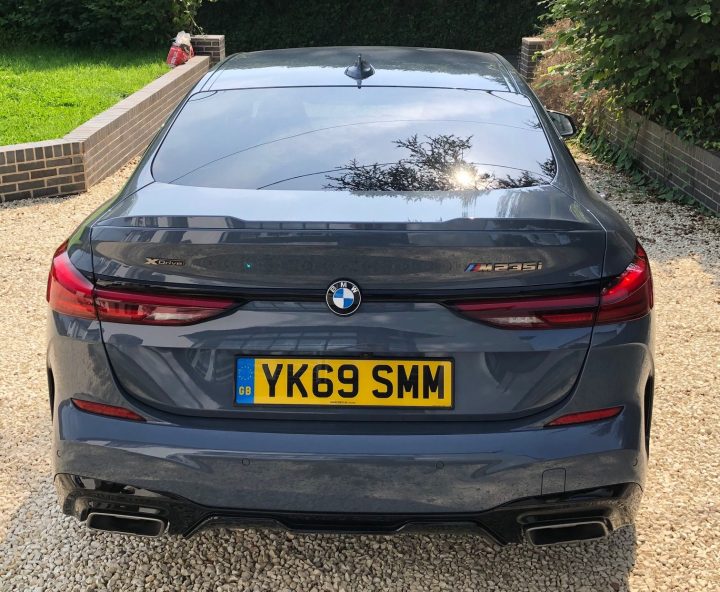 The BMW M235 xDrive looked and felt very well put together with an eye-catching interior to match its head-turning exterior styling.

It did not disappoint behind the wheel either and the M235 xDrive is a worthy addition to the Gran Coupe line up.