BMW used to have their performance car mantra of ‘front engine with rear wheel drive’  and then along came their X range of 4×4 SUV’s – the X1, X3, X5 and X6 plus X6M.

Although xDrive all wheel drive for their conventional cars had been available in other European markets, it is only in the last year or so that BMW in the UK have introduced the all wheel drive option to their 1 Series 5-Door Sports Hatch, 3 Series Saloon, Touring, Gran Tourismo and 4 Series Coupe, in most cases with petrol and diesel engine options.

I have just had a very Wintery driving spell in the BMW 3 Series Touring 330d xDrive M Sport priced at £39,915.  For the record the BMW 3 Series was the UK’s best selling premium brand range again last year.

The range finished up in 7th position in the UK’s top ten sales chart with 43,494 registrations, many to company car users, the backbone of buyers in this sector.

The BMW 1 Series finished the year in 9th position with 41,883 sales with competitor Audi or Mercedes-Benz models not making the charts at all although overall the Audi brand did for the first time outsell BMW in the UK.

BMW’s premium brand German competitor Audi have for many years had quattro all wheel drive versions throughout their range, 43 of them at the last count, and many more manufacturers have introduced 4×4 traction including Vauxhall for their Insignia and of course Subaru and Volvo have  been stalwarts of all wheel drive performance.

The successive Winters of atrocious weather conditions, poorly maintained road surfaces lacking in grip have quite rightly increased the demand for 4×4 cars and estates for those who do not want to buy bulky SUVs. 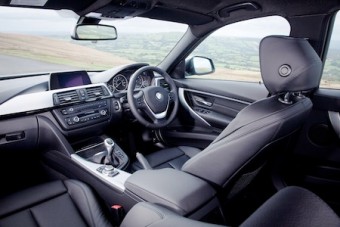 They provide better grip on wet or dry roads but by no means are they meant to be a substitute for an SUV off-roader.

With the BMW xDrive four-wheel drive system each axle uses its traction to provide stable acceleration out of bends. If in particularly adverse conditions more torque has to be applied to the road, that’s when the associated Dynamic Stability Control function comes into operation.

In addition to improving traction, the system also recognises the first signs of oversteering and understeering and adjusts the power distribution to each wheel.

Within a tenth of a second it can distribute up to almost 100% of the engine torque to the front or rear axle via the transmission and an electronically controlled multiple-plate clutch before returning to the normal 40:60 distribution ratio. Dealing with aquaplaning on motorways or providing extra grip of flooded or mud, snow and ice covered country A/B roads and lanes has spurred the demand for all wheel drive grip.

In the case of the 3 Series Touring with the 330d, six cylinder diesel engine with direct injection boosted by BMW’s Twin Power Turbo system provides 258bhp and 560Nm (413lb ft) of torque from just 1,500rpm.

The xDrive system adds £1,515 to the price over the standard 330d rear wheel drive model which given the price of these estates is a small price to pay for the added driving security and peace of mind.

Both models have BMW’s new 8-speed silky smooth automatic transmission. The rear wheel drive version returns an official 55.4mpg in the Combined Cycle with CO2 emissions of 135g/km so VED road tax is £125 a year and company car drivers will pay 23% Benefit-in-Kind tax from April this year. 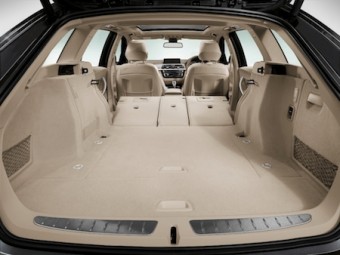 By comparison the xDrive 330d version officially returns 52.3mpg, CO2 is 142g/km so VED is £140 and BIK company car tax is rated at 24% from April. Despite its potential for added safety the xDrive model is rated at Group 41, three places more than the rear wheel drive model.

As for performance, the xDrive model is marginally faster for the zero to 62mph acceleration time – 5.4 seconds against 5.6 seconds. Top speed for both is limited to 155mph.

Although the 2.0-litre, 320d turbodiesel remains by far the most popular engine in the 3 Series range and it is available with two and four wheel drive transmissions, for those drivers higher up the company car chain, or the retail buyer with a bit more money to spend, they will love the 330d unit for its ‘grunt’ and responsiveness.

It really is a ‘push the throttle and go’ unit, its quiet and refined and in real-life conditions during my test drive in appalling road conditions it returned 41.5mpg.

But given the weather and the speed of other traffic that was done mainly in its driver selectable Eco-Pro mode so it is no likely to match the official mpg figures if driven in a more spirited manner in Normal, Sport and Sport+ modes.

Other than the notable extra grip and stability provided during cornering, or when hitting a deep pool of kerbside standing water, there is no real sensation of the xDrive system working behind the scenes.

It is not in any way intrusive and it doesn’t dull the driving pleasure, indeed it enhances it because the seed is sown in the driver’s mind that there is more grip with a better balance of power distribution during acceleration and powering through corners.

With its lowered M Sport suspension the ride is on the firm side due in part to the 18-inch alloy wheels shod with low profile run-flat tyres. 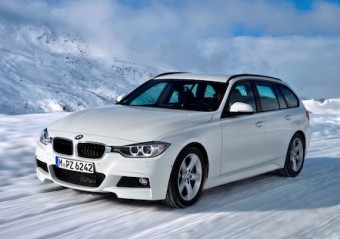 However my test car came with lots of options being showcased by BMW –  £8,975 worth of them ranging from upgraded leather upholstery to  heated front/rear seats, the BMW Professional Media package, panoramic sunroof, variable rate sport steering and visibility package which includes blind-spot alert.

The 3 Series is the executive company car driver’s favourite, the Touring five door estate body just adds that extra practicality. The handling and all weather xDrive option, with whatever choice of engine is made, enhances the performance of what is already the best handling car in its sector, premium brand or otherwise.

Against:  Expensive and additional options need to be chosen carefully.