To those of a certain age there was only one sporting car, a rear-wheel-drive coupe, and this simple formula mix are the ingredients in the BMW 220d M Sport we have just tested.

Front-wheel-drive hot-hatches largely replaced the iconic ideal must-have for enthusiasts but they never replaced the balanced handling and driving satisfaction of a RWD coupe. 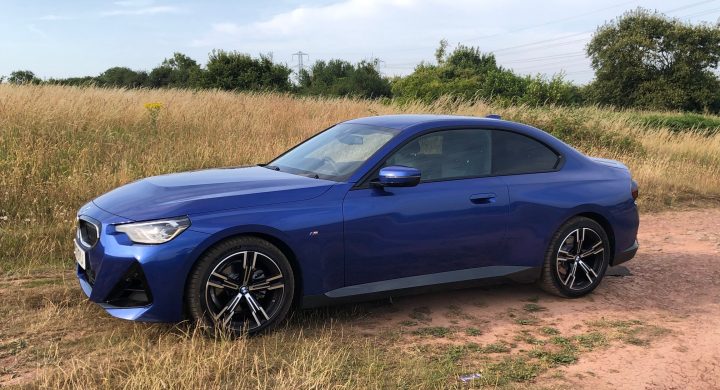 BMW itself has built some memorable FWD hatchbacks but for a lot of their owners they are in a different class to RWD and the seductive curves of a coupe. The thoroughly practical hatchbacks contrast with the stylish sportsters and as incomes rise and families move on, a lot of hatchback drivers have been looking at coupes.

The cost of the standard car was £36,420, plus delivery, and including special paint, but comfort and technology packs added £1,975 to the price.

No-one could be disappointed with the BMW 220d M Sport Coupe and its highly refined and sophisticated interior, sublime powertrain and bewildering electronic driver aids and systems to extract the widest smiles from the driver and passengers.

It has a very good, respectable performance, with its long-legged gearing and unburstable diesel engine quietly rumbling away under the long bonnet the economy is excellent. Get it into the right sweet spot of the rev-range and the thumping power comes out and is put onto the road by the rear axle in a very positive and drama-free manner. 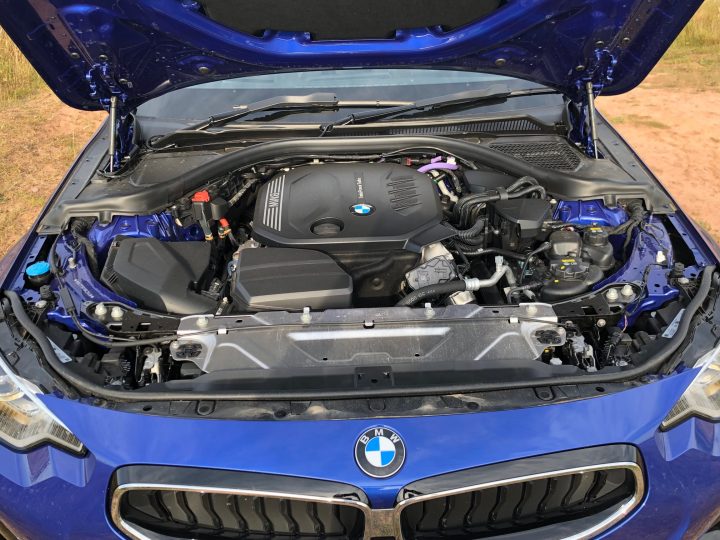 While not the quickest in its executive coupe class either accelerating or attainable maximum speed, the BMW 220d M Sport Coupe is arguably the most refined and easiest to drive. The ZF gearbox has auto and manual selection to suit driver’s purposes.

And did we mention that fuel economy at a time when prices are soaring, and a diesel is still making a lot of sense for the high mileage driver in particular?

There is very little lag when accelerating from rest, even less when overtaking on the move and the wonderfully slick automatic changes mean miles just disappear whether in town or country.

Drive it really hard and there was a little jerkiness from the powertrain but ease off the throttle a bit as it neared the red line and there was just smoothness between ratios.

Now I’ve always been a fan of BMW brakes and the 220d did nothing to affect my memory of their lightness, precision and power while the electronic parking brake was like an anchor on our weekly test hill. Some testers have reported the brakes being difficult to judge a smooth stop but I have never had an issue.

Turning to the steering – see what I did there – and the system in its normal mode is nicely balanced and imparts good feedback but you have an electronically weighted sport mode which can be selected and this is more imagined than real but effective nevertheless. Ours came with a heated wheelrim. 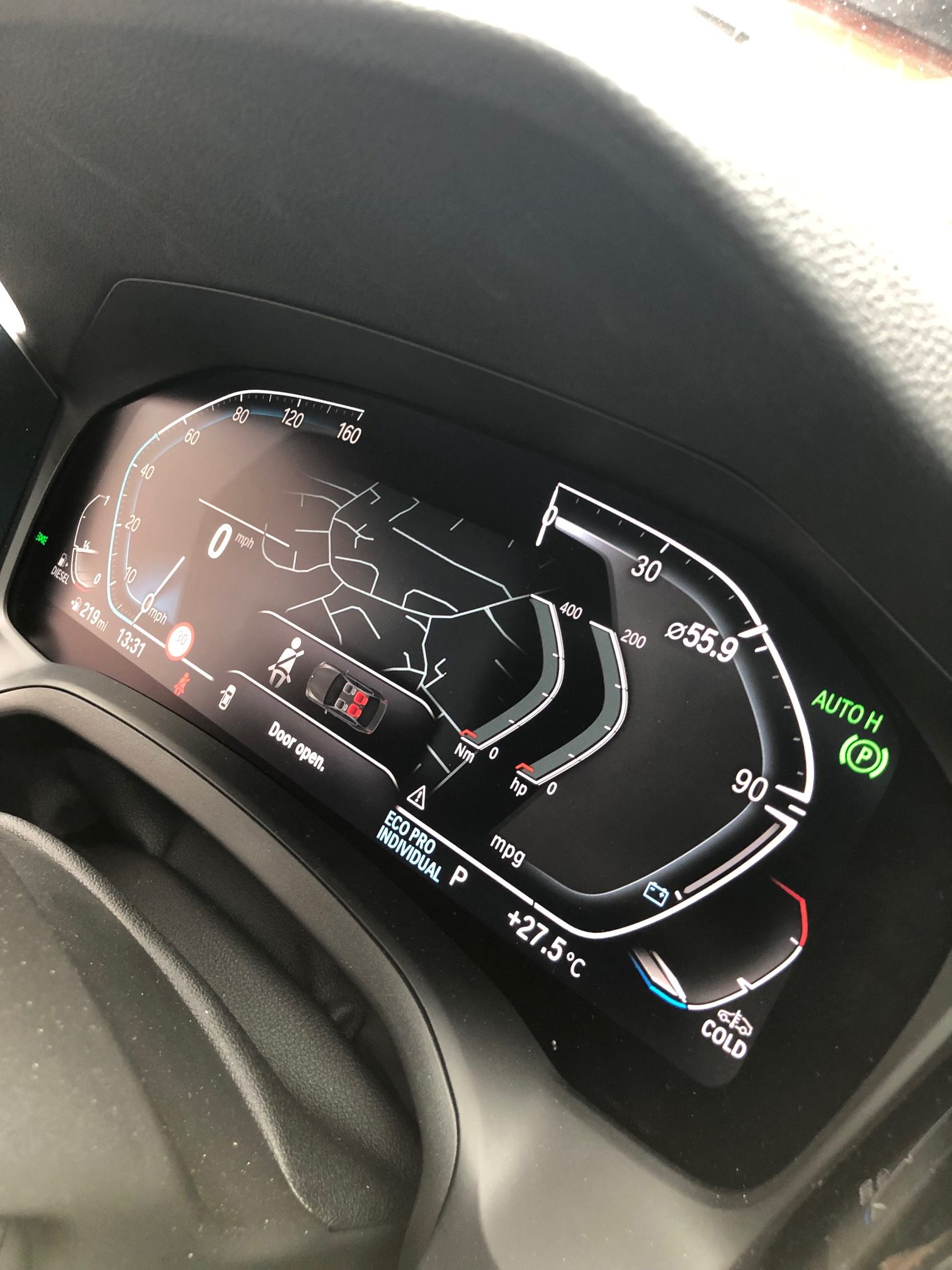 The steering, brakes and gearchanges can be modified through a driver assist system that goes from standard to either sport or eco-pro settings and in the latter even enters more variables to optimise economy, changing the instruments’ display along the way to emphasise aspects of the desired performance. Selection is immediate and noticeably different. 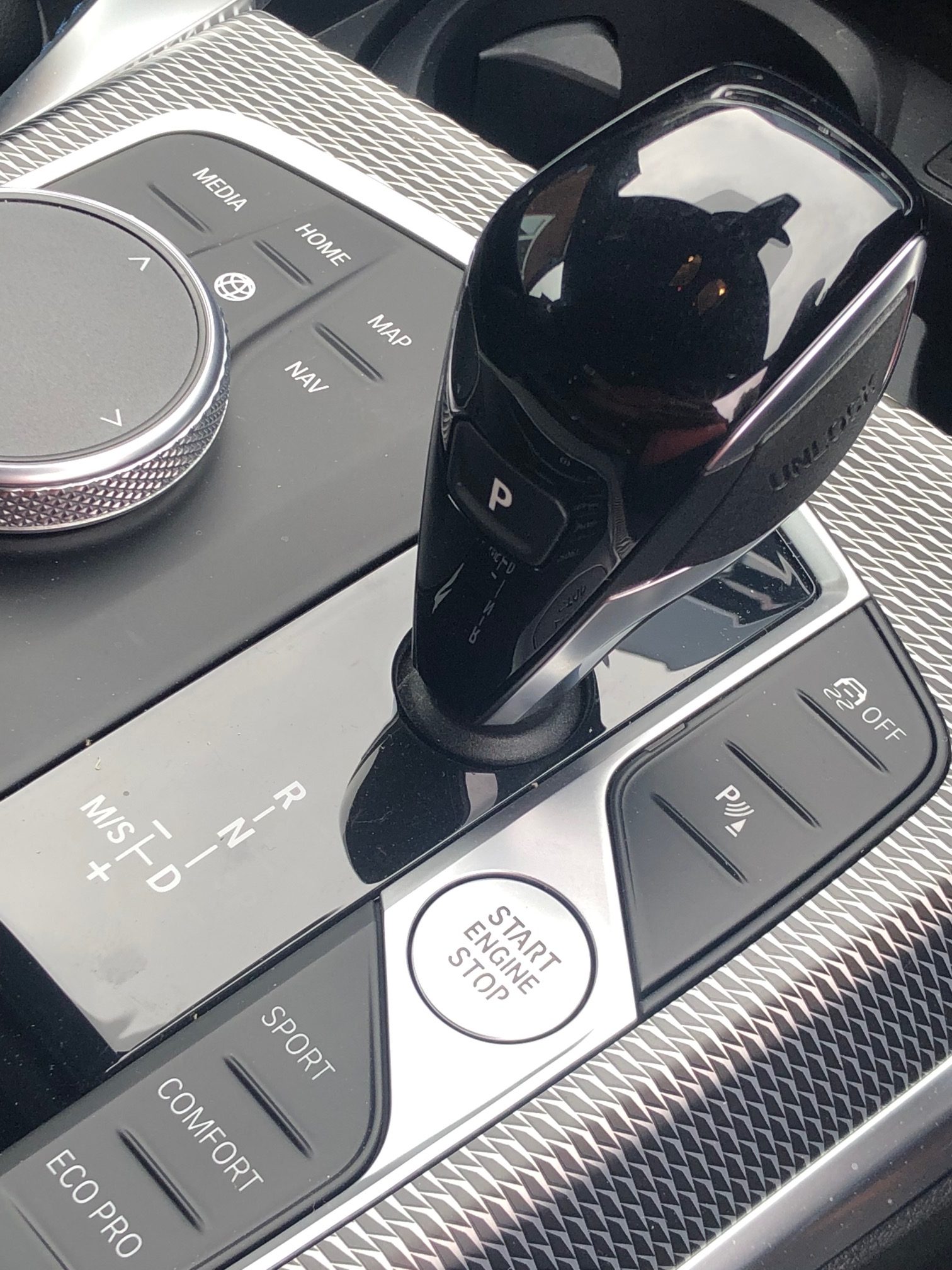 What it does not do is vary the suspension rates by a significant amount, which are fine for me, but occasionally the system struggled to absorb the worst bumps and potholes and contrasted with the otherwise uniformly smooth action through a multi-link rear and front McPherson strut system.

This meant the BMW 220d M Sport Coupe was a very predictable drive, entirely safe and surefooted with lots of grip from the 18-inch wheels and low profile Michelin tyres. 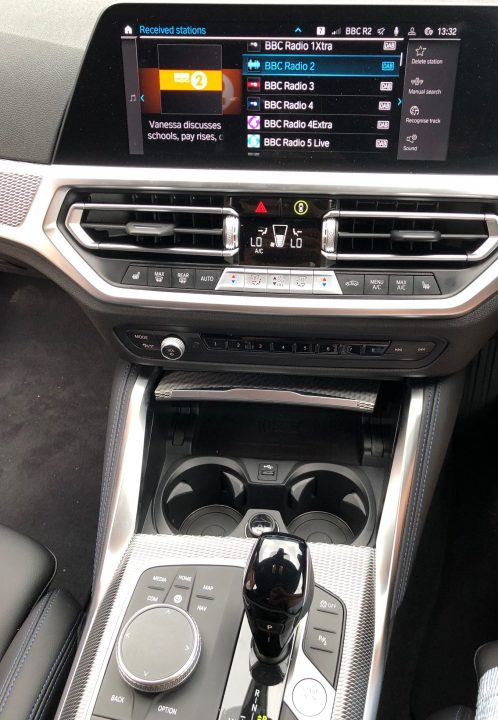 Secondary controls were plentiful but the gearbox ‘paddles’ and indicators or wipers were hidden behind the wheel-spokes which carry buttons for navigation/ infotainment/ cruise control and need some familiarisation and worked in conjunction with the push buttons on the big central multi-function display and the BMW i-Drive on the central console.

Separate row of buttons worked the climate control and it was highly effective on some of the hottest days of the year and even gave the two rear seat occupants control over their space. 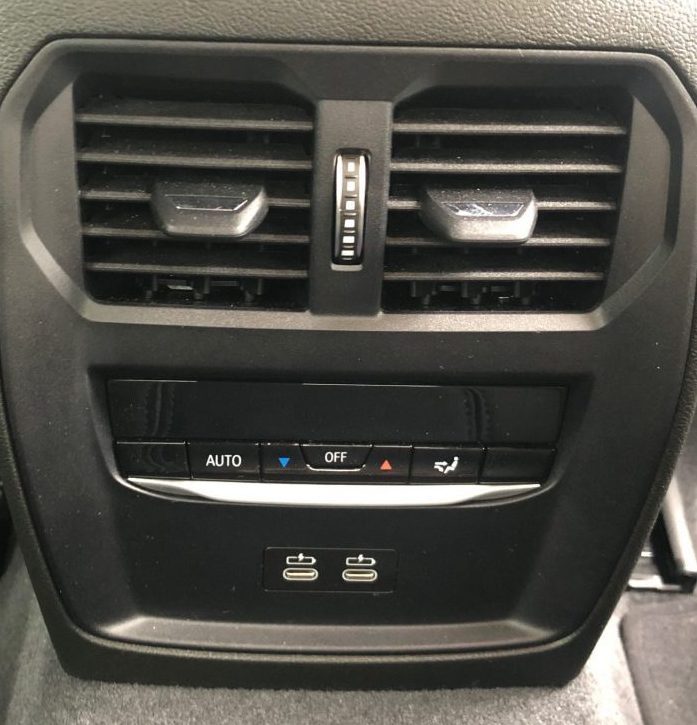 Oddments room was very good for a family car with large door bins, seat pockets trays and recesses throughout the cabin and I liked the ski-hatch between the back seats for long items which could be shut off or dropped down to reveal two cup holders. Little space has been wasted. 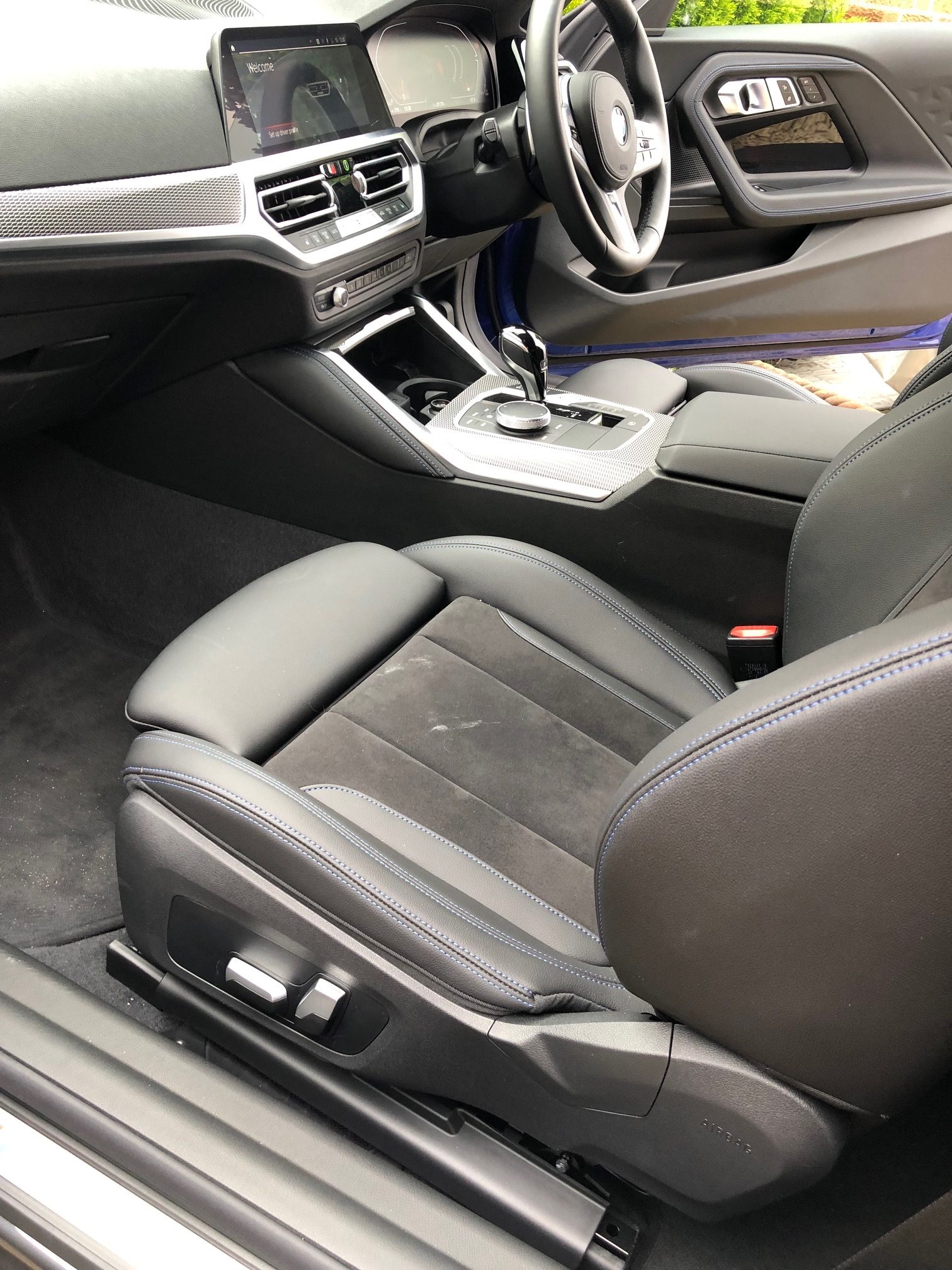 Looking at space, the boot is of a reasonable size with a low loading lip, not a lot of height but good width and length.

Climbing into the back seats was not so easy with a very slow acting sliding mechanism to move the front seats once the squabs were lifted by a manual release, and then only a child could squeeze in with short leg and headroom available. It also felt tight once inside and the high waistline contributed to the feeling of being cocooned. 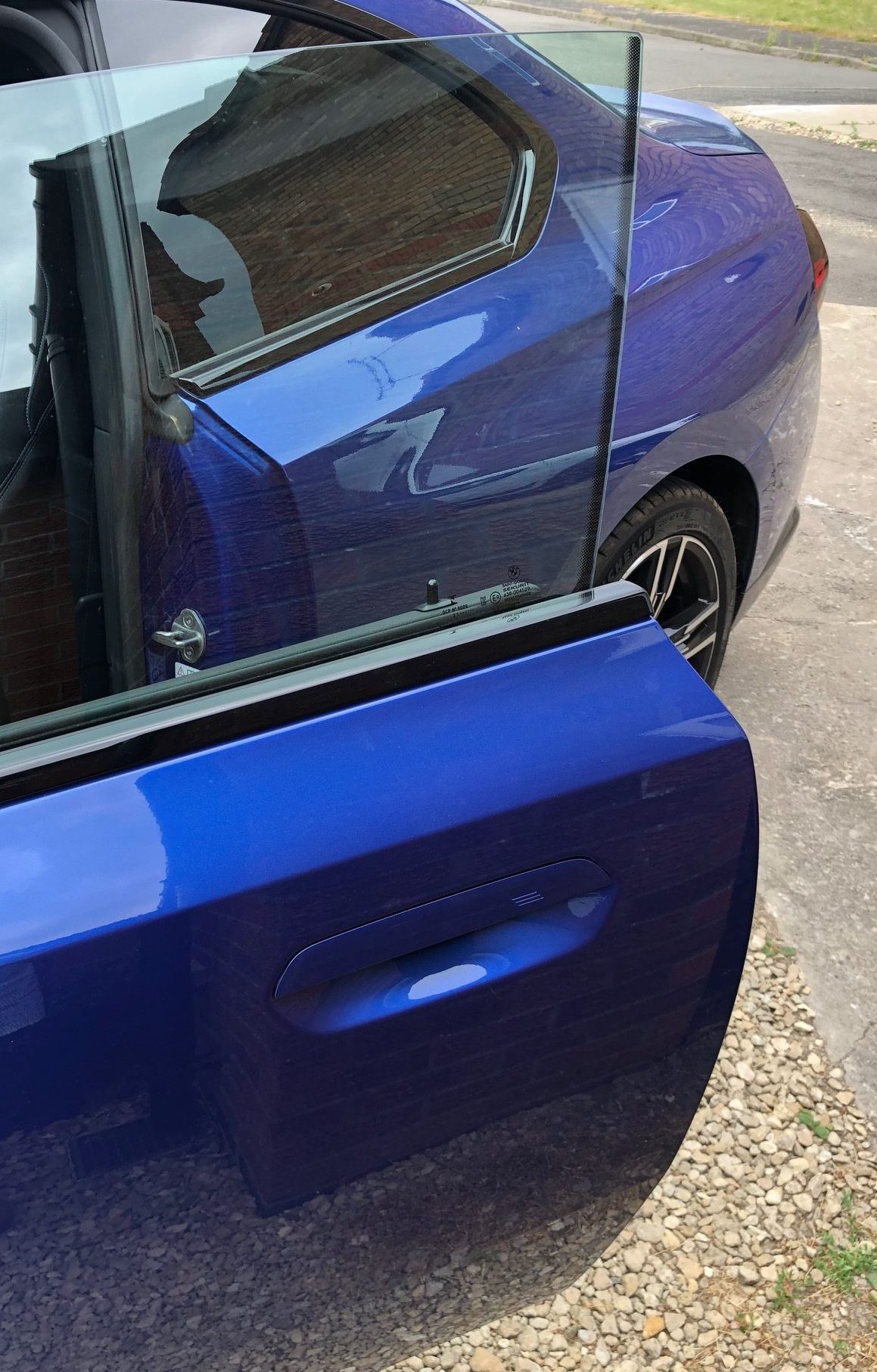 Very wide-opening pillarless front doors gave unrestricted front seat access and all seats were deeply shaped and nicely covered on the test car in faux leather but one passenger said they did support where desired in the small of the back. I liked the adjustable under-knee support. Electric memory and heating was a feature of our front seats. 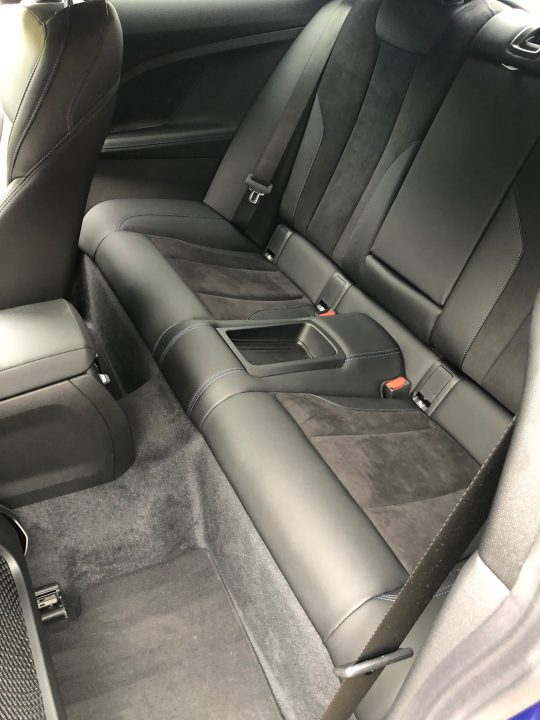 Apart from the restricted vision for the rear seat occupants, the driver and front seat passenger had good, uninterrupted sight lines nearly all around, save for the wide rear coupe pillar, and the test car had a comprehensive set of sensors and cameras inc. an overhead view, to assist with parking.

Intelligent headlights and wipers ease driving in bad light and wet weather and there is no rear wiper as airflow keeps the glass clear of rain. The A/C kept the interior clear and electrically heated and adjusting door mirrors were big and provided a good field of view.

With so much effort put into the refinement of the BMW 220d M Sport Coupe you may be disappointed by the quietness of the car considering its competition credentials. Well it is uncommonly quiet when rolling along but you can produce some busy notes from the engine under hard acceleration in Sport mode but that’s about it. 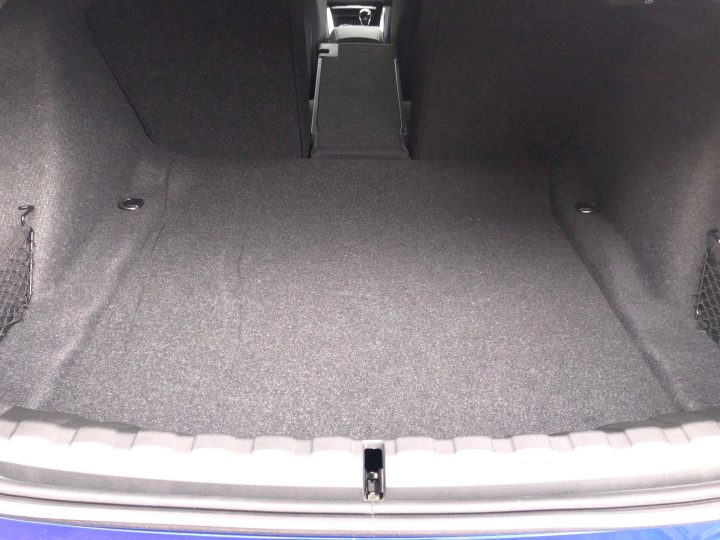 Expected road rumbles are very low, wind noise non-existent and other mechanical sources were muted. Even the doors just close with a woosh, not a thud.

So, if you enjoy your motoring and don’t want an ultimate performance coupe with higher fuel and insurance costs it would be hard to beat the BMW 220d M Sport Coupe at any age. 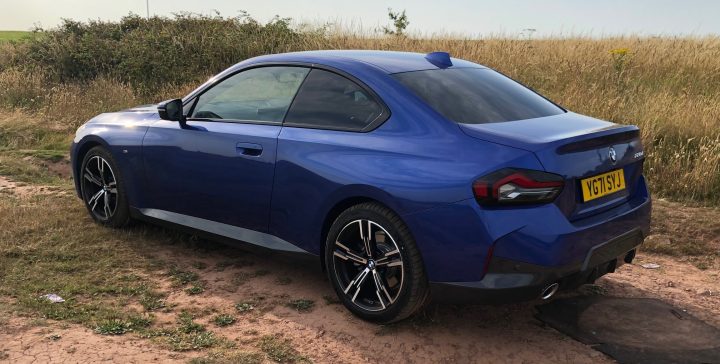