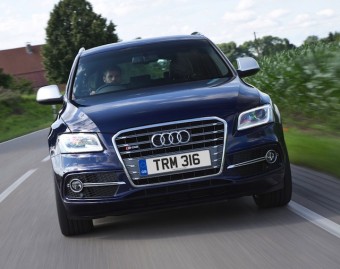 The newcomer is the  £44,055, SQ5 3.0-litre TDI version, the first Audi ‘S’ model ever to be powered by a diesel engine.  For many of the Audi model ranges the ‘S’ specification is the midway point in terms of equipment and performance, positioned above the volume selling S-line and SE versions and below the full blown RS high performance level.  Prices for lower performance and specification Q5s start at £30,980.

Gillian Headings, Audi UK’s product manager for A4/A5/Q5 ranges said, “Sales of all our Q 4×4 SUV models are growing in the UK despite the economic climate. Demand appears to be driven by the uncertain climatic weather conditions and the worsening road surfaces. 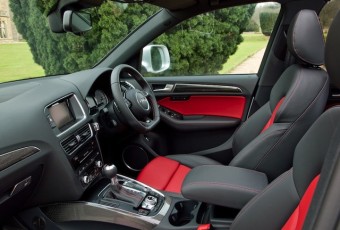 She added, “As a niche model we had anticipated UK sales for the SQ5 to be around 300 units this year but already we have advance orders for over 500 vehicles but luckily there is no restriction on us having more to meet the very high demand. From the advance UK orders we are seeing SQ5 sales mainly going to male buyers but of course we know a huge number of ladies actually drive our Q models.  The buyer’s age group is between 30 to 40 years and 60% of sales are currently going to retail customers,” she said.

The SQ5 has an eight speed tiptronic automatic gearbox as standard. Top speed is restricted to 155mph and zero to 62mph takes just 5.1 seconds.   Officially it will return 41.5mpg in the Combined Cycle and my short test drive around the affluent areas of Ascot and Windsor plus a short spell on the M3 motorway, resulted in a figure of 35.7mpg.

Given the need to sample the SQ5’s responsiveness and acceleration, the greatest functions of this engine, rather than the irrelevant and legally unusable high top speed, I think that fuel economy figure was very acceptable.

The new Audi SQ5 competes against the BMW X3 xdrive 35d M Sport Steptronic say Audi.  The BMW costs £1,160 less to buy but the SQ5 is a little faster but marginally less fuel and CO2 efficient even though they have the same bhp power output with the SQ5 offering a shade more torque.

The BMW scores with lower road tax at £175 for the First Year rate and only 27% for company car tax instead of the SQ5’s 30%.  The load space is also a little larger in the BMW X3 but the SQ5 has a 2% better residual value rate over 3-years/60,000 miles according to CAP Monitor, the industry independent guide to future values.

The SQ5’s 3.0-litre TDI engine uses two turbochargers ‘in series’ for the V6 unit. The first one blows as soon as the accelerator is touched giving immediate boost and then the second one streams in seamlessly to give an even bigger boost mid range and upwards.

This configuration say Audi eliminates turbo-lag and gives a linear supply of power up to almost 3,000rpm.  The engine is red-lined at 4,500rpm.  It is the responsiveness and acceleration punch that really impresses when moving past slower traffic in the shortest time on our congested roads and all this is done driving through the quattro permanent all wheel system which is known to sap some engine power.

On the open road at legal maximum motorway speed the 3.0-litre unit is totally relaxed thanks to the ‘tall’ top gear ratios in the eight speed tiptonic auto box.  This transmission has two operating modes; D is configured for optimum fuel consumption and S is mapped for a more sporty response.

The tiptronic gearbox can be operated by the gear shift lever or by steering wheel paddles.  Descent control is also included but ground clearance, due to the lowered suspension, when venturing off-road will need to be done with care.

To keep the SQ5 on the straight and narrow the sports suspension is 30mm lower than the standard Q5. Macho sized 20-inch wheels amply fill the wheelarches. Audi’s Drive Select function offers the choice of Comfort, Auto, Dynamic and Efficiency modes so the driver can tune the car’s performance to meet their individual requirements.

As standard the suspension and drivetrain is set-up for optimum and razor-sharp on-road high speed handling during cornering but having paid all that money to own SQ5 drivers can still electronically ‘tinker’ with various steering, engine, transmission and suspension settings.

The ride is always firm of course but the Q5’s SUV body carries off this firmness better than most conventional Audi passenger cars.

There is bespoke instrumentation and S design gear lever, badges on the door sill trims, engine starter button and S design steering wheel. The interior is predominately finished in black but a silver coloured roof-lining and a variety of colour inserts for the seats can be specified as an option.

Electric windows and mirrors, air conditioning, automatic lights and wipers, cruise control, DAB radio as of May production and parking sensors are all standard fit.

In true Audi style there is a wide range of extra cost options and packs that push the high price up further. Audi say 40% of buyers go for some of these high cost options; such things as sat-nav, upgraded sound system, parking assist, active lane assist, rear seat entertainment equipment and power operated tailgate.

Three year service packages costing £31 or £58 a month are also claimed to be popular and there are four and five year extended warranties on offer as well.

Audi never misses a trick to part their customers from even more money and the fact that advance orders for the impressive SQ5 are already almost twice the level expected who can say they are wrong? It’s certainly impressive in terms of engine performance and a good example of how the Audi brand is using its success in diesel powered motorsport and bringing it to the open market for production cars.

Against: Some of the extra cost options should be fitted as standard for this price, very firm ride, wind and road noise intrusio