The latest Audi RS3 is really a supercar, for sensible money.

There has been a long line of highly acclaimed Audi RS3 models, higher performance versions of the popular A3 series which launched in 1996 and included the S derivatives three years later before the original Audi RS3 appeared in dealerships in 2011. The revised RS then ran from 2015 until 2020 and in late 2021 we saw the current third generation unveiled. 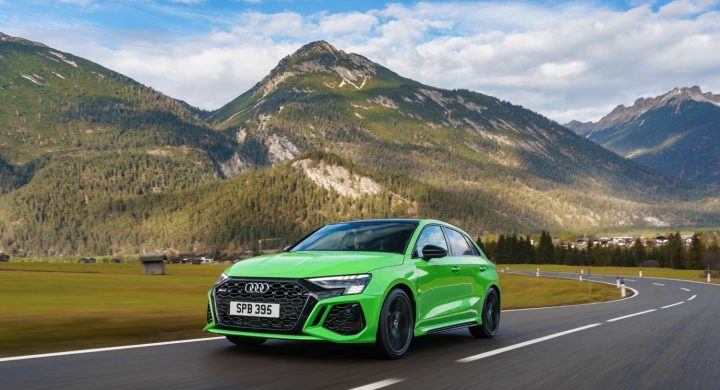 I believe the newcomer will become a future classic with its phenomenal five-cylinder 400ps petrol engine punching out 500Nm for something like two-thirds of its power range.

Aligned with an incredibly smooth seven-speed automatic/manual transmission and long legged gearing it packs heft hit when you floor the throttle from standstill or mid-range and it runs onto an electronically limited 155mph,

By that time you’ll have zipped past 62mph in under four seconds and be hanging on as the speed climbs and the seamless changes flick away underneath. If you want a familiar twin paddle system can be used but there’s little point because the Audi RS3 really does a cracking job at covering ground. 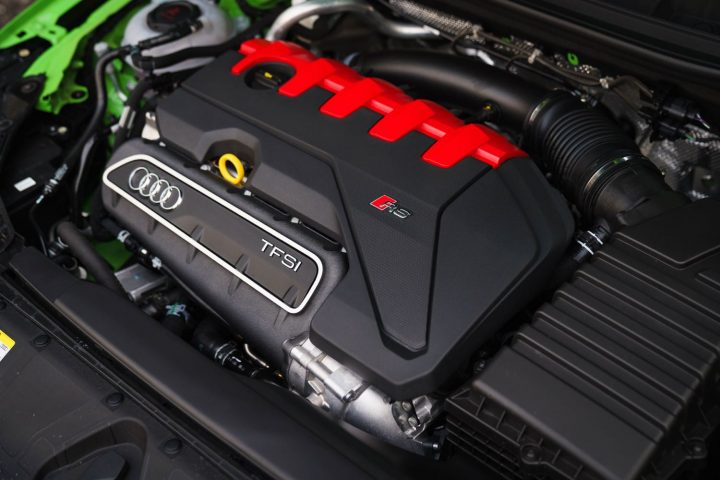 The engine is never silent but the standard burble is satisfying and the crackle which comes with the changes and higher speed roar are addictive.

The highly sophisticated on-board management system allows the driver to select four modes from normal to individual for the main powertrain and chassis features and these are reflected in the noise levels but more importantly the responses and feedback.

We all like different elements of economy or excitement and the Audi RS3 provides plenty of choice.

It delivers them in what some may describe as a Q-car body, meaning its not too overtly sporting but rather highly practical with minimum fussiness. 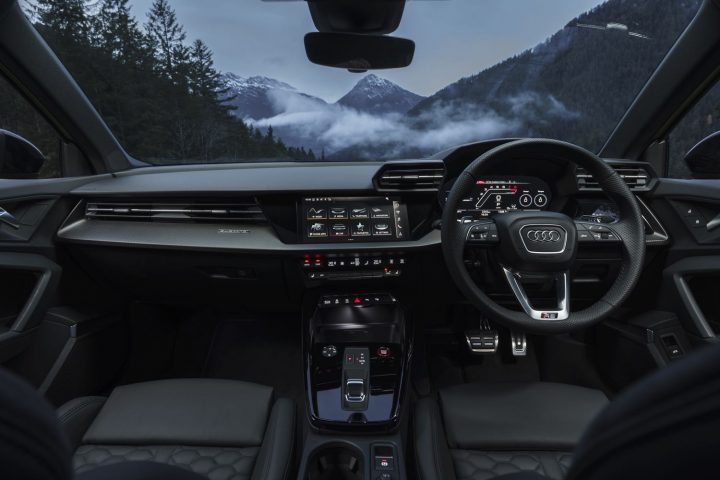 Like the powertrain, the feedback through the steering wheel can be fine-tuned for taste while the massive disc-brakes are incredibly progressive in their application and powerful when needed to dramatically slow down. The combination of the brakes, steering and powertrain responses inspired confidence and a tremendous feeling of safety at any speed.

A big footprint from the tyres and wheelbase imparted excellent roadholding to match the all-wheel-drive quattro system developed by Audi over 40 years ago so you have an all-seasons supercar under your control.

Secondary controls grouped around the wheel, column, across the console and along the fascia need familiarisation because of their multiplicity but they do work very well and include what I term ‘short-cuts’ for some of the features buried in the big infotainment and driver assistance display atop the fascia. 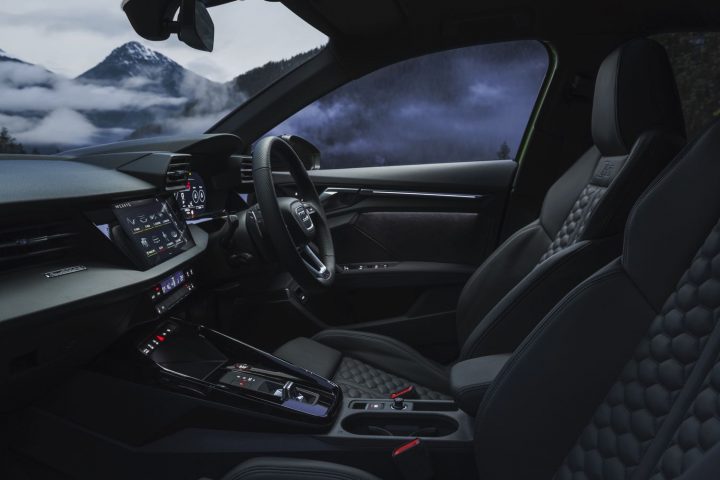 Depending on the selected modes, the small display directly infront of the driver changes to highlight aspects and settings apart from the regular tachometer and speedometer and it’s really a matter of personal preferences.

Whatever is chosen the displays are clear, colourful, and well sized, and so are those on the larger display in the centre of the dashboard.

Heating and ventilation is fairly straightforward by comparison and it works quickly, comprehensively and effectively throughout the cabin. 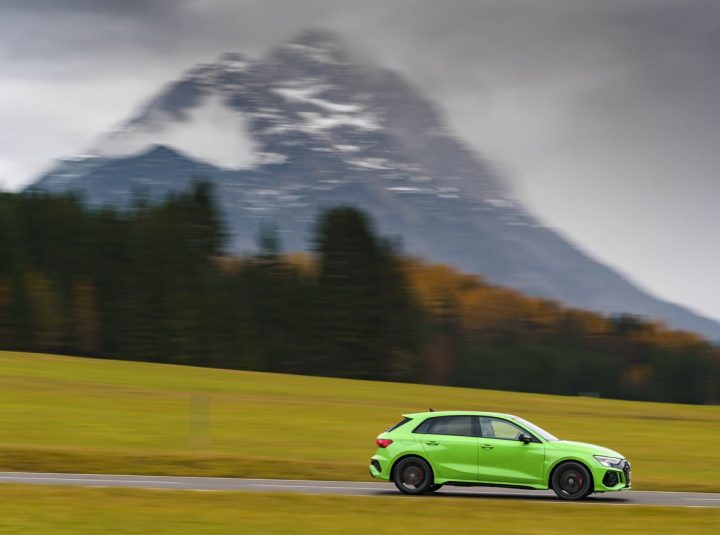 Our Launch edition trim included a glass sunroof with shade which added to the ventilation options along with the four powered windows.

Oddments room was good, not exceptional, but certainly adequate for our needs with trays and recesses on the transmission tunnel, a small-lidded compartment, door bins and seat back pockets. There is a rear window shelf in the Sportback but it lifts with the door.

Access to the boot and interior was very easy, it was sensibly shaped to take shopping or suitcases but the capacity is not huge when the rear seat is used. 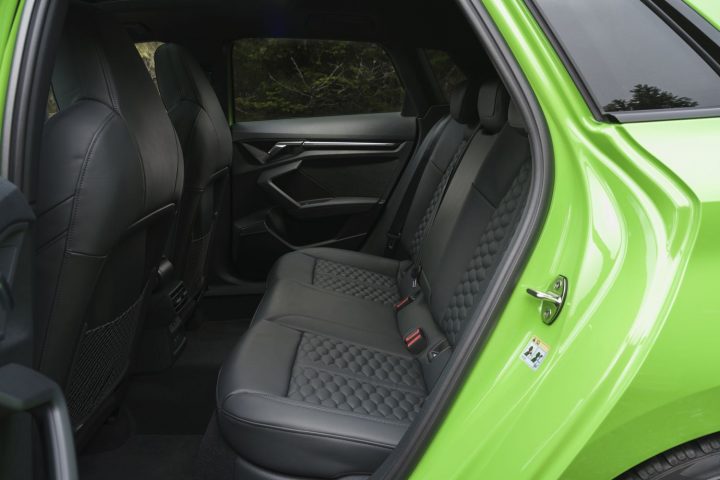 The rear seats are fairly flat but still provide good support if a little short when it comes to legroom while the front pair of sports seats on the Launch edition really hold occupants securely and include adjustable under-thigh support while giving a wrap-around feeling of security. Adjustment was very good for reach and rake, while headroom was plentiful throughout the cabin,

The Audi RS3 is not a quiet car as previously mentioned and the powertrain noises were expected and variable but the road rumbles and suspension bump-thump from the 19-inch low profile tyres were ever present and fairly consistent so you can turn up the sound system to enjoy that instead. 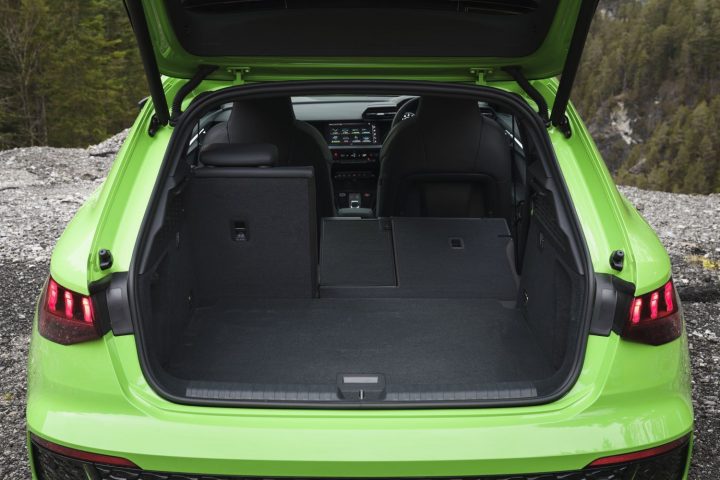 We covered a lot of ground with the test car and every mile was thoroughly enjoyable, particularly when we recorded an overall consumption of close to 37mpg. One spirited session did halve this but it was the average that impressed as we were not driving to be as economical as permitted, but as enjoyable as possible.

With the end of internal combustion engines in sight, this Audi RS3 may be the last fling, but what a way to go out and I believe it will become a future classic of the modern era. 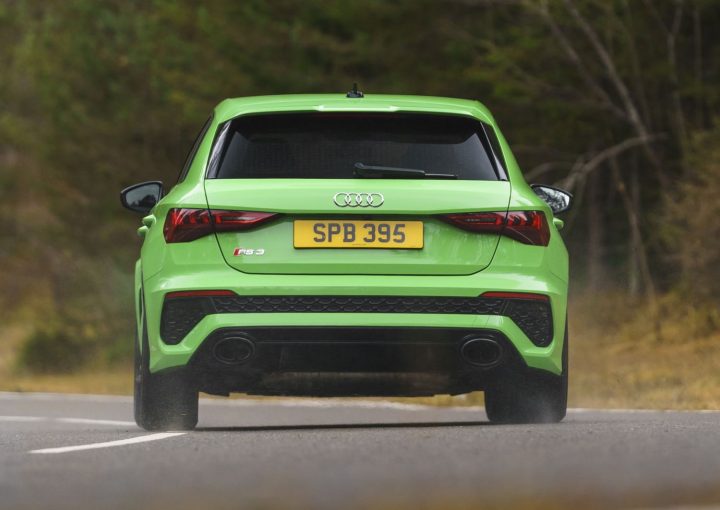