Normally you can wait months for a good convertible to drop its hood and enter the UK market, but now two good models have come along at the same time. Before you decide which is better for you, read our reviews below. 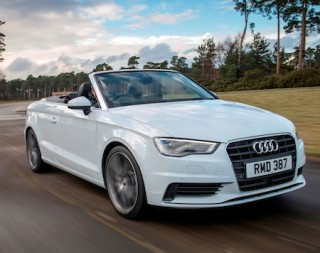 With two new A3 models being added to their line-up the Audi brand has grown from 17 to 48 variants in 13 years resulting in five years of record UK sales.

In 2013 the premium German brand secured over 140,000 new car sales in this country finishing for the first time ahead of BMW.

However Audi’s growth path still goes on and Jon Zammett, head of public relations for Audi in the UK said at the media launch for the latest two additions to the line-up, “We are now at 48 variants in our expanding range but this will increase to 60-ish by 2020.

“We currently have supremacy of the premium brands in the UK but with other manufactures increasing their model line-ups sales are becoming something of a catfight – but we are the ‘top cat’ for now.”

The latest Audi additions are the third generation A3 Cabriolet and the first generation S3 quattro Saloon but they will not be adding too much in terms of volume sales opportunities as they are both niche products.

In a competitive market Audi are now coy about forecasting sales but historically the last generation A3 Convertible sold around 3,500 units to UK customers in a full year, 70% of them to retail customers.

The sporty S3 quattro Saloon is a new model to the line-up and we pundits suspect it could account for around 350 UK registrations in a full year – about 10% of expected A3 Saloon sales. Retail customers are expected to account for between 60 and 70% of UK sales.

Total UK sales last year of all versions of the third generation A3 range, launched with the Hatchback in 2012, the Sportback in 2013 followed by the Saloon the same year, achieved just over 30,000 registrations.  Already in 2014 and for the first time ever, Audi’s A3 models currently feature in the UK’s top ten new car sales chart. For the first two months of this year A3 sales were 4,278 units putting it in seventh position overall.

With Spring now hopefully sprung it’s timely for Audi to launch a new Cabriolet version of their best selling A3 range of the three door Hatchbacks, five door Sportbacks and the most recent addition – the four door Saloons.

The A3 Cabriolet priced from £25,790 is initially launched with three Euro 6 compliant turbocharged engine options offering more power, higher performance, lower CO2 emissions better fuel economy. The line-up is the 1.4 TFSI, 140PS,  cylinder-on-demand petrol which will be the most popular taking 30% of sales, the 1.8 TFSI, 180PS,  petrol with 2% of sales and the 2.0 TDI, 150PS, turbodiesel which will take 25% of sales.

To come will be a 1.6  TDI, 110PS, turbodiesel which is expected to appeal to 30% of buyers, a 184PS version of the 2.0 TDI unit which should take 10% of sales and finally the S3 quattro, 300PS, TFSI petrol variant should appeal to 3% of customers. Put it another way, diesel models will take 65% of UK sales.  There are manual and auto transmission options for most engines.

To compliment the engine line-up are three levels of specification starting with SE then Sport and S line with the latter expected to be the choice of 40% of UK customers and the other two taking 30% each.  There are three no cost suspension options.  These include Sport and S Line versions to be ordered with the easier riding standard SE suspension – a choice I’d take. 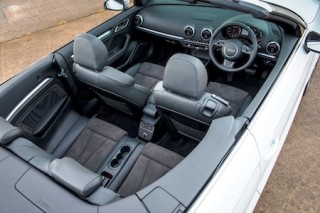 The new third generation A3 Cabriolet has grown over its predecessor increasing by 183mm in length to 4,421mm. The width has gone up by 28mm and the height is reduced by 15mm.  Although larger it is lighter thanks to aluminium and lightweight steel hybrid construction. The boot space goes up by 60-litres to 320-litres with the roof closed.

With the rear seats folded there are 678-litres of boot space but with the electrically operated fabric roof folded down there are just 275-litres of soft bag space.  The roof can be raised or lowered in under 18-seconds at speeds up to 31mph for those showery days.

During the media test drive event using busy south coast and rural New Forest roads the star performer for me was the 1.4-litre TFSI turbocharged two-four Cylinder-on-Demand petrol engine with 140PS (138bhp) of power and  250Nm (184lb ft) of torque from just 1,500rpm.

This VW Group engine operates between two and four cylinder modes as dictated by demands on its power output. At low speeds, or on the overrun, two cylinders operate before seamlessly switching to four cylinders when the accelerator is pressed. It is a lively, responsive and fuel efficient engine and the least costly to buy. It has a 6-speed transmission now with an S tronic auto to come in the second quarter of this year. 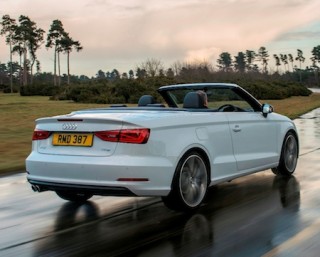 Top speed is 135mph and zero to 62mph takes 9.1 seconds. Officially this unit will return 56.5mpg and on test it returned 40mpg but the roads were busy. With CO2 emissions of 114g/km VED road tax is zero cost for the First Year rate and then only £30 for Year Two onwards.  For most owners this is the perfect engine and the most affordable with the SE version costing £25,790. With the predicted best selling S line specification it goes up to £29,165 but options will add considerably to those prices.

Overall the new A3 Series Cabriolet is classy, really smart looking compact drop-top with a beautifully built cabin. Rear seat space is limited as is boot space with the roof folded down.

The strengthened body, when coupled to the larger 18-inch wheels, gives a very hard and unforgiving ride at times so I’d stick with the 16-inch alloys and the SE no cost option suspension settings.