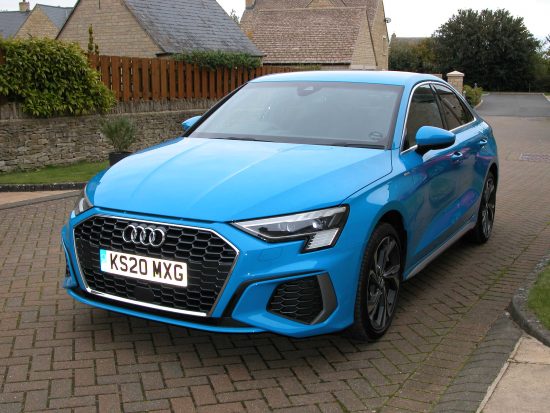 Affordability and suitability is now more relevant than ever in modern times, says David Miles.

As an example of car downsizing do we need an Audi A4 Saloon or will the new Audi A3 Saloon suffice?   The new  mainstream four-door A3 Saloons are now finding their way to UK customers priced from £25,840 to  £39,095 but if a four door is not family-friendly enough then the new A3 Sportback (five-door hatchback) would be more practical and its cheaper being priced from £23,875 to £38,500.

The two ranges more or less mirror each other for engine and spec options. For now the power units are 30 TFSI which translates from Audi speak into a 1.0-litre turbo petrol unit with 110hp and a 6-speed manual gearbox. 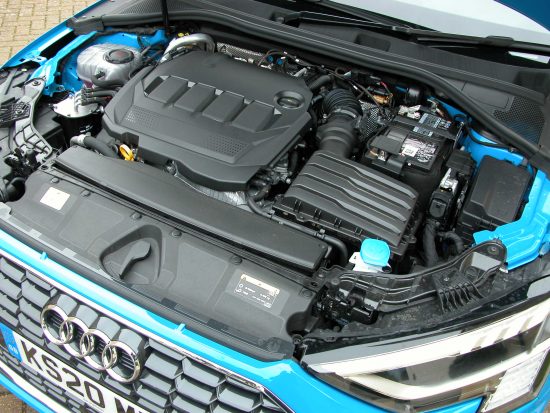 Next we have the 35 TFSI which is a 1.5-litre, 4-cylinder-on-demand turbo petrol with 150hp and with the choice of 6-speed manual or 7-speed auto gearboxes.

Just too muddy the choice, Audi very recently announced the new A3 Hybrid Sportback PHEV priced at £33,060 with its 40 TFSIe 1.4-litre petrol engine/electric motor 204hp powertrain with 6-speed auto gearbox. This low-tax plug-in hybrid has an official Combined Cycle fuel economy of 282mpg, CO2 emissions of 31g/km and can be driven up to 41-miles in electric power only.

The choice gets harder for some hard-core motor enthusiasts as both A3 body styles are also now available as S3 versions, the Sportback at £38,475, the Saloon at £39,040.  Scorching power comes from a 2.0-litre, 4-cylinder TFSI turbo petrol engine with 310hp and more importantly 400Nm of torque with quattro all wheel drive. Top speed is limited to 155mph with zero to 62mph taking 4.8-seconds.  Future news suggests an RS3 Sportback with 400hp will arrive later in 2021.

So for now that’s the A3 range current and future choices and my test drive choice was the A3 Saloon 2.0 TDI 150hp or 35 TDI as Audi brands it.  It comes as standard with a 7-speed DSG twin-clutch auto gearbox and costs £32,220 in S line spec form. The full array of mainstream model spec levels are Sport, S line, Edition 1 and Vorsprung. In normal Audi ways the test car was loaded with a wide range of extra cost options which pushed the price up to £37,805. The options included Turbo Blue paintwork at £575, the Driver Assistance Pack at £1,405, 18-inch alloy wheels at £145, memory function for the driver’s seat at £1,215, Matrix LED exterior lighting at £675, heated front seats at £330 and a Bang & Olufson premium 3D sound system at £760.  The black leather front sports seats with S embossing are a no cost option but as usual some of the ‘extra’s’ should be fitted as standard in a car of this class – upselling at its best – or worst.

Compared with its predecessor, the new A3 Saloon is now a little longer, the wheelbase is the same and it’s a shade wider.   This means a little more elbow room and 20mm more headroom in the front while there is a 425-litre boot with folding rear seat backs when needed, the same as the previous generation model.

The A3 Saloon is 150mm longer than the Hatchback models and the Saloon’s coupe roof styling and long side body sculptured lines accentuate the powerful stance helped with the more pronounced wheelarch shape. Under the car are shields to smooth the air flow, just one of a number of aids used to make the body aerodynamically efficient. At the front is a bold honeycomb grille flanked by trapezoidal LED headlight units for all versions and under which are LED daytime running lights with specific light ‘signatures’ which differ by model. 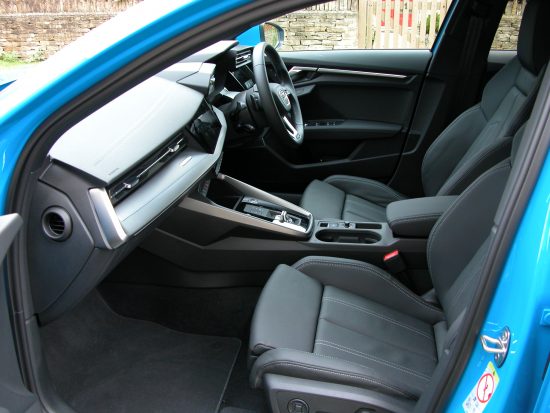 I just wished, given the cost of the car, my S line version had hand’s free opening and a rear view camera which any spec level of the A3 Saloon needs because the reversing guide lines which appear on the touchscreen  do not give enough visibility guidance.

Inside it is typical Audi and many of the controls can be found on other VW Group models of similar size such as the VW Golf, Skoda Scala/Octavia and SEAT Leon which are of course competitors to the A3 range as are the BMW 2 Series Gran Coupe or the Mercedes A-Class Saloon.

The positioning of the controls are driver focussed and easy to use physical switches positioned close to hand to operate the heating, ventilation, heated seats and other functions. The Audi Virtual Cockpit includes a centrally positioned 10.1-inch infotainment touchscreen which isn’t easy to use on the move and there is the 10.3-inch screen in the instrument binnacle with different selectable layouts of dials and information.

Unusually for the driver face level air vents are positioned like two ears either side of this binnacle.  A prominent ledge with a hard metal edge runs the width of the dashboard and spoils what should be the uncluttered lines of the dashboard. There are other examples of hard and cheaper-feeling materials around the centre console and it’s a similar experience with other VW Group medium sized models that production costs are overruling quality in some areas. 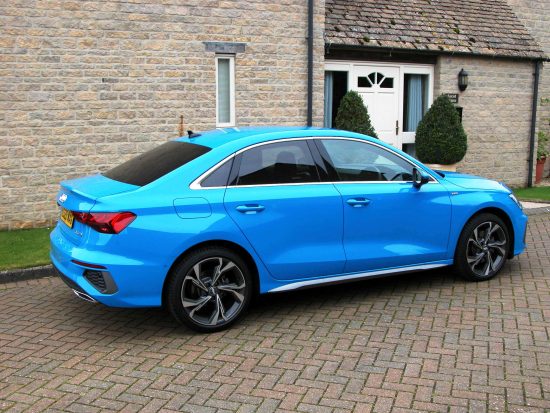 The higher up the range you go the more spec you get but in these frugal days only order what you need – nice to have will not be financially nice at all.

Under the bonnet of my test model was a 2.0-litre, 4-cylinder 35 TDI turbodiesel engine in its EU6 form and like before this is the workhorse power unit of most mainstream VW Group mid to large size models. I know diesel sales have plummeted, so far this year only accounting for 16.8% of new car sales (209,093-units). But for the high mileage business user they are still a cost effective way to motor. 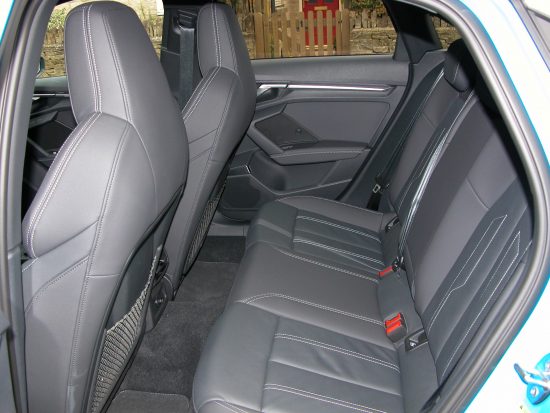 With 150hp and a massive 360Nm of torque from just 1,600rpm the engine cruises with ease, accelerates strongly yet it’s docile and quiet pottering along in stop start traffic and its quiet for a diesel at all speeds. It is a beautifully easy to drive power unit matched with the standard 7-speed S tronic dual clutch auto box. Yes I know its diesel but it is truly still fit-for-purpose.

For god measure it is fuel efficient with the WLTP Combined Cycle figure for the S line model I tried being 58.9mpg and 58.4mpg was the overall average for my week of motoring with as high as 63.8mpg recorded on a long run. 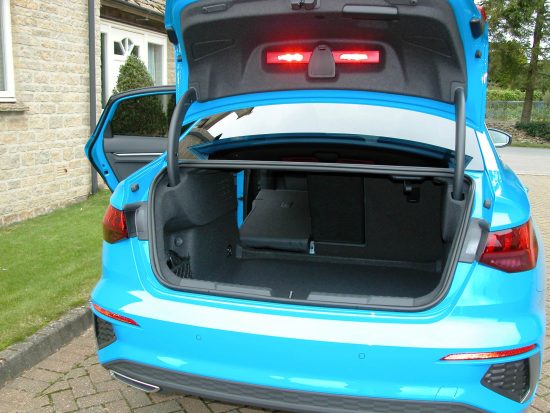 The A3 Saloon is very sharp to drive with precise steering giving it an accurate front end although perhaps the steering does lack feedback but nothing to moan about. Selecting Sport mode does improve steering feel but Efficiency mode is the better responsible option and it doesn’t dull the performance to any great extent.

The handling balance of the car fore to after and side to side was brilliant, loaded or unloaded. It rides flat and level no doubt helped by the sports suspension with the uprated four-link rear suspension the S line spec level has.

This sports suspension can be deleted when ordering to get the softer but looser handling standard system.  I wouldn’t be taking the larger 18-inch optional wheels either. Bumps and thumps are more evident with the firmer suspension and larger wheels on poorer surfaces and can be tiresome on a longer journey – a trip on the north eastern end of the M25 was not pleasant. 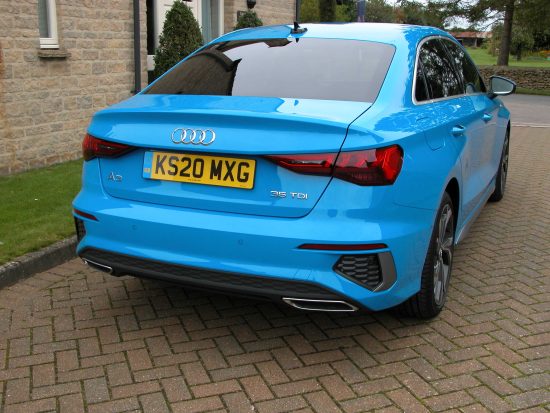 Whilst the Hatchback will remain the main breadwinner in the new Audi A3 family, for the drivers that like the finer things in life, family duties permitting, the Saloon is the model that has a classier image with desirable rarity value.