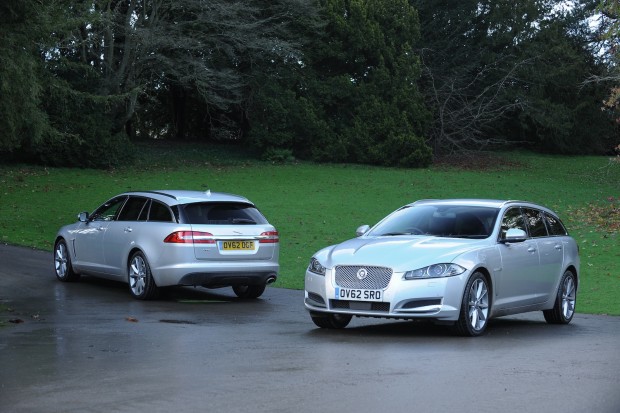 Jaguar has had an on and off love affair with estate models.

It has tried and faced testing times in the past, but now that could all change with the introduction of the XF Sportbrake five door estate series this month, now part of the XF executive saloon and estate range.

There are 13 estate models, for now, priced from about £32,000 to over £51,500 and while they are two wheel drive, there are 4WD versions sold in the US and are likely to be arriving in the UK within two years.

Powered by a range of powerful, yet efficient, diesel engines in 2.2 and 3.0-litre capacities, the XF Sportbrake marks the debut of new derivatives based on the 2.2-litre Diesel unit. This engine is now available in 163PS and 200PS outputs – the latter replacing the existing 190PS output version. Both share highly competitive CO2 emissions starting from just 135g/km and economy of 55.4mpg.

The Sportbrake will also be available with a 3.0-litre turbocharged V6 engine in 240PS Diesel and 275PS Diesel S derivatives. Each emits 163 g/km of CO2 and returns 46mpg on the combined cycle.

Despite its focus on versatility, in Diesel S form, the XF Sportbrake can accelerate to 60mph from rest in just 6.1 seconds. The 240PS variant can achieve the same feat in 6.7 seconds.

The XF saloon, first launched in 2008 also benefits from the new engine upgrades. Applied to the saloon, the new 2.2-litre Diesel engines share the same economy and CO2 figures as the Sportbrake. Deliveries of the saloon commenced in September with prices starting at £29,940 on-the-road.

The XF saloon and Sportbrake both adopt the eight-speed automatic gearbox and Stop/Start as standard across the engine range – improving emissions on the V6 Diesel engines by six per cent on the saloon.

Jaguar believes, but is not sure, that approximately one-in-three Sportbrake models will be acquired for business or fleet drivers.

They will be encouraged by the high mileage savings associated with the diesel engine, which is available exclusively in the estate version of the XF while the saloon stablemates comes with a range of petrol units as well.

I tested two diesels offered in the XF Sportbrake, the miserly 163PS, 2.2-litre with its ultra low emissions of 135gkm and the flying 275PS Sport derivative in 3.0-litre capacity and a supercharger.

The smaller and cheaper of the two from £31,940 lacks nothing in terms of refinement and smoothness and as such is a perfect custodian of Jaguar traditions which were, after all, built on big petrol engines.

But times change and diesel is the preferred choice for high mileage motorists such as fleet users. They will be pleased with the least powerful of the 2.2-litre family.

The powertrain really is very good with instant start up, good pulling for load lugging or overtaking, excellent steering and brakes.

The Jaguar XF Sportbrake does a very good job of smoothing out bumps, and this is always a challenge for an estate which has to cope with wide ranging demands. It’s also very easy to load the luggage area, with a low sill, high and wide opening tailgate and quickly folding back seats. Driver and passengers have good access too. 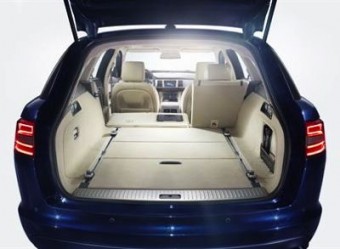 It was noticeably livelier, particularly when moving off, and it revelled in the mid-range of the eight gears in the auto-box.

You can select normal or sport change modes on the transmission and they make a difference when you are pressing on.

I thought the bigger engine made more noise under acceleration and was also more aware of road rumbles from the tyres. Handling was very safe and surefooted with high degree of grip. Well trimmed loadbed needs careful use

The XF Sportbrake is a very sophisticated car in either version tested and some might find it difficult to believe there is a diesel engine under the bonnet because of its responsiveness and refinement.

For an estate it has a natural blindspot when reversing because you find it difficult to judge the position of the tailgate and you cannot see anything below waist-height and rely instead on sensors or a camera. You need the big door mirrors as the internal mirror shows up only a small clear area of road between the rear headrests and the roofline. Inside, the seats are comfortable and the room is good with modest amount of oddments space.

With the increasing move towards estates from larger MPVs, there is no doubt that the new Jaguar XF Sportbrake will make a big impression and be a very serious rival to competitors from Germany, particularly when it gets the all wheel drive versions in 2014.