You are here: Home / Roadtests / Vauxhall Cascada is ready for the summer 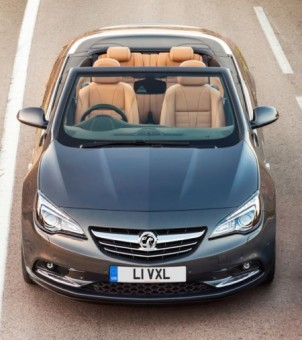 Vauxhall’s immediate soft-top predecessor was the Astra Convertible, but one cannot help notice that the Cascada is an altogether more serious and worthy addition to the model line-up, writes Glen Smale.

This all-new convertible, at nearly 4.7 metres in length, is a full-size, four-seat, fabric-roof convertible and is longer than an Audi A5 Convertible. It is also the first full-sized convertible designed, engineered and manufactured by Vauxhall since the 1930s, launching the company into a fourth new sector in just a year. It becomes immediately apparent, that the quality of finish of both the interior and exterior, is very impressive.

In the cabin, four adults can be easily accommodated while the available boot space, with the roof up, is more than adequate, although reduced once the roof is lowered and stowed.

The seating position can be adjusted to suit most driver/front passenger heights with electric assist being available on the test car. On the downside, the seats did feel rather hard after a long trans-European drive on motorways.

Cascada’s design team, headed by Briton Mark Adams, set out in 2009 to discuss a car with classic lines in the style of the Grandes Routieres (luxury touring cars) of a bygone age, matched with the impressive interior space and high-quality materials expected by today’s demanding motorist.

The following year, the design began to take shape, helped by the front screen and A-pillar, which was borrowed from the Astra GTC. 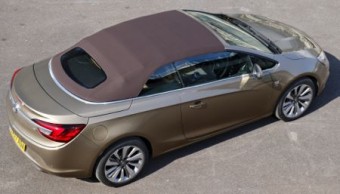 From its shapely bonnet and strong front end, the Cascada is a modern and handsome convertible that looks good with the top up or down. The Cascada’s fabric roof can be specified in one of three colours coordinated with one of ten body colours. The roof can be operated via a button on the key fob or an interior switch in 7-seconds.

With the top down, it has a perfectly clean profile with no roof-top cover or visible roll-over protection disturbing the car’s silhouette aft of the steeply-raked A-pillar.

Luggage space with the roof up is impressive at up to 380 litres roof up and 280 litres with the roof down making the Cascada an exceptionally practical convertible. If further room is required then the rear seats can be folded down using Vauxhall’s FlexFold system, which electrically releases and folds down the rear seats in a 50/50 split formation.

While the Cascada shares its dimensions with some full-sized convertibles, Vauxhall has positioned it in the C-sector due to its highly competitive pricing.

Based on the 12,000 units sold in 2013 across both Europe and the UK, it is apparent that most of the car’s sales will however be on the Continent. On price, the Cascada’s key competitors include the Volkswagen Eos, Golf Cabriolet, BMW 1 Series Convertible and the Audi A3 Cabriolet, although in some cases the Cascada is longer than some of its rivals.

The trip through France and back into the UK showed that the 6-speed Cascada is an easy drive, and it’s a car that you want to be seen in. The only downside with our test vehicle is perhaps that it did not prove to be particularly frugal at the pumps, returning no better than an average of 34.5mpg on the whole journey. 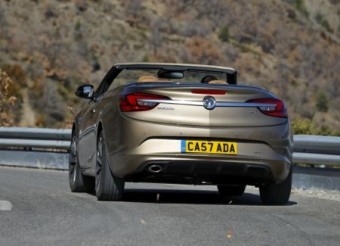 The Cascada offers a full-size, four-seat convertible with premium qualities and technologies at an extremely competitive price.

The full-sized convertible sector tends to be occupied by high-priced cars from premium manufacturers, but Vauxhall feel with the Cascada, that they are offering customers high levels of equipment, technology and luxury at an affordable price.

Vauxhall is on a mission to change people’s perception of Vauxhall once again, and the Cascada is one model with which they hope to achieve this. The attractive Vauxhall soft-top is without question a worthy C-segment contender in the market.