You are here: Home / News / Triple win for Mick in Mileage Marathon 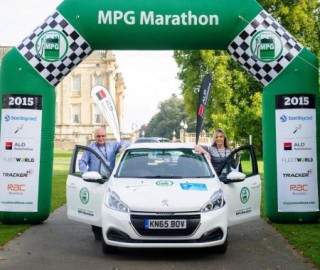 Three-time former champion, Mick Linford, has added to his impressive haul of eco-driving trophies by taking first place in a highly competitive 2015 MPG Marathon, sponsored by Barclaycard Fuel+ in association with TMC, in a Peugeot 208 Active Blue HDi.

Linford, who won the event three times from 2009 to 2011 said he was “over the moon” with the performance.

“I had no idea we had done so well. This is the highest mpg I have ever achieved in the event and I’m absolutely delighted to win it again,” he said.

They in turn were only just ahead of third placed drivers, John Kendall, editor of International Fleet World, and Paul Nieuwenhuis of Cardiff Business School, who recorded 103.28mpg in a Citroen C4 Cactus Feel Blue HDi 100.