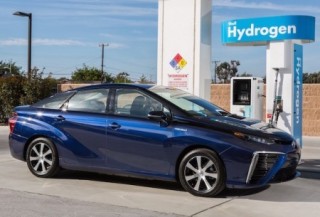 Toyota marked the arrival of its Mirai fuel cell saloon on Britain’s roads with the handover of vehicles to its first customers at a ceremony hosted at Toyota (GB) PLC’s Surrey headquarters.

Mirai is the world’s first hydrogen fuel cell saloon, benefiting from Toyota research and development into fuel cell technology spanning two decades, and world-leading experience in hybrid vehicle power systems. Using hydrogen gas to generate electricity within a fuel cell stack, Mirai produces no tailpipe emissions other than water. Spacious, refined, comfortable and safe, it combines its advanced technology with superb practicality: a full-tank driving range of around 300 miles bears comparison with a petrol-powered car and the refuelling process only takes about three minutes to complete.

The UK is among the first wave of national markets in Europe for Mirai, together with Germany, Denmark and Belgium. Toyota expects 12 to be on the road in the UK before the end of this year, including four vehicles announced by Transport for London last week.