You are here: Home / First Drives / This time it’s personal with the new Peugeot 108 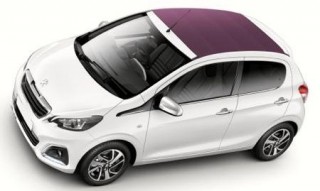 The timely launch of the second generation Peugeot 108 will coincide with the City Car segment expected to grow to over 242,000 annual UK sales this year.

Sales have been driven by their lower purchase price supported by very affordable monthly PCP payment amounts with cheap running costs, cheaper insurance and they are easy to drive and park in our congested World.

Peugeot say customers for A-segment City Cars in the UK are female biased across two key age brackets, 25 to 35 year olds and 60 plus represented by couples without children who use their vehicles for urban journeys.

However there is a move, due to traffic congestion and increased running costs, for small second cars in the family to become the main car and to be used for longer journeys hence the new requirement for more comfort, better specification and higher performance plus of course personalisation options.

The new Toyota Aygo recently introduced answers most of those requests as does its sister cars, the new Peugeot 108 and the Citroen C1 ranges both just about to arrive in the UK.  All three model ranges are built in the joint venture Czech Republic factory by Toyota and PSA Peugeot Citroen.

Steven Fahey, Peugeot’s UK Public Relations Manager said at the media launch of the new 108 range, “60% of customers in this sector choose higher specification models, we have a good heritage in this sector so we have added more trim levels, improved the standard specification, added a new engine option and as well as having three and five door versions we have now included an addition Top! version which has an electrically operated retractable canvas roof.”

Fahey said that they expect to sell 21,000 new 108 annually and the canvas Top! version is expected to appeal to 20% of UK customers, 80% of buyers will opt for the three and five door hatchbacks  with the five door models appealing to 67% of customers. 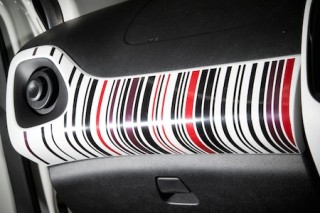 The new 1.2-petrol engine is predicted to be chosen by 35% of customers and retail buyers will account for 76% of total sales.   Depending on the body style and the engine chosen there is the choice of Access, Active, Allure and Feline levels of specification, plus a list of options, new bright colours and personalisation factory fitted theme kits such as Dressy, Kilt, Diamond, Tattoo and Barcode (left).

The new TV advertising theme for the Peugeot 108 has just started promoting the personalisation options with the strapline “This Time its Personal”.

The Citroen C1 also offers three/five door bodystyles and both engine choices plus the canvas roof option and their prices start at £8,245 and go up to £11,935.  However the standard specification between all three brands varies so exact comparisons cannot be accurately made.

Also subject to comparison will be the very popular PCP monthly personal contact purchase options taken up by around 80% of all new retail car buyers in the UK.

The Peugeot 108 PCP rates start from £89 a month which is more or less the same as the Toyota Aygo with the Citroen figures still to be finalised. But again the customer must be sure to choose their best option as to the amount of deposit required, the contract length and the final amount to be paid at the end of the finance period varies.

For the new cool personalised Peugeot 108 it was a launch by fire in the heart of Birmingham,  writes Robin Roberts.

Peugeot anticipate most 108 owners will use their car in urban and heavy traffic, so the emphasis is not so much on speed as style and convenience.

And it certainly turned heads with its optional £350 Barcode finish stripes over the door mirror housings and across the dashboard panel of our 1.2 Top! Cabrio in Allure specification at £12,595 all in.

Unfortunately on the test car the barcode graphic was not well applied and peeling, giving it a less than stylish shabby chic character and the strong lines distractingly reflected in the side windows and eye-line to the mirrors. The £150 folding roof was much more attractive and snug as well as quick to open or close.

There is more front legroom than in the 107 but rear knees would be pinched behind them, even for a child. Boot space is margining increased with room for a couple of cases under a cleverly concealed luggage cover. 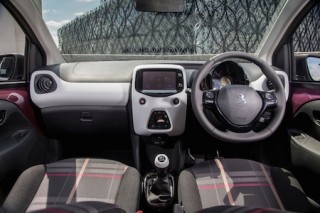 Inside, the equipment is vastly improved with most versions getting a 7-inch tablet touch-screen for multi-function use and its very simple to use.

The 1.2 litre engine is lively if a little throbbing in nature and you have to carefully judge changes and overtaking but the new 108 steers faithfully and stops with a strong push on the pedal.

You can hear the road rumbles but generally it rides smoothly and has some body roll on tighter turns. It is very good to drive in urban areas and it keeps up with traffic on rural roads.

With the new 108 1.0 litre engine you have more work to do and it only makes sense if you do not need to get anywhere quickly but economically and we averaged 53.8mpg compared to 44mpg in the 1.2 version.

With the new Peugeot 108 series it really is a case of horses for courses and a personal choice.