You are here: Home / News / Classic / The Classic tribute to the Triumph Stag

As the world’s biggest celebration of retro motoring and motor sport, The Classic is renowned for its record-breaking celebrations of bygone road and racing icons. 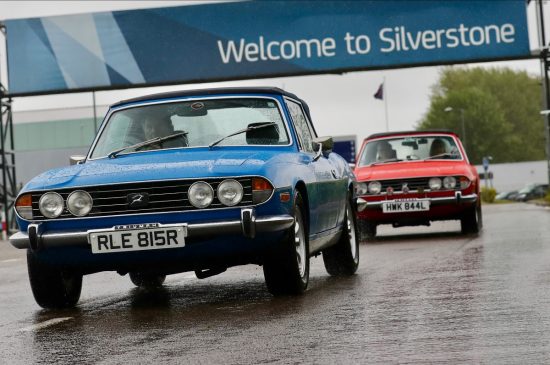 Visitors to recent festivals have witnessed giant track parades featuring unprecedented numbers of Ferrari F40s, Jaguar XJ220s, McLaren sportscars, Porsche 911s and even Formula One racers. This summer it is the Triumph Stag with more than 450 of the stylish 2+2 convertibles for a special 50th birthday ‘Stag Party’ on Sunday 1 August.

“It will be the biggest turn-out since the heady days of Woburn Abbey way back in 1990 when we had more than 700 Stags for our National Day,” confirmed Tony Lapworth of the Stag Owners Club.

“To mark this important milestone, for the first time we have now made The Classic our official National Day and the wonderful response from our members has been just fantastic. To see so many Stags together on the circuit is going to be really, really impressive.”

Just as The Classic’s own 30th birthday celebrations have been carried forward from last year’s postponed event, the Stag’s golden anniversary gathering was originally planned for 2020 – 50 years after the sublime sports tourer was launched in 1970.

While frustrating, the 12-month delay has resulted in an even bigger turn-out than previously anticipated. And, without current international travel restrictions preventing owners from the Europe and US attending, numbers could have been higher still.

In total, between 1970 and 1978 Triumph built close to 26,000 Stags in Coventry and nearly half of these remain in existence today – a tribute to the car’s enduring desirability among classic car enthusiasts.

With well-maintained examples changing hands for between £15,000 and £20,000, they are relatively affordable, too. With its sharp Michelotti-penned lines, accommodating four-seater convertible configuration and glorious sounding, torquey 3-litre V8 engine, leaping Stags have always had huge appeal.

With so much going for it, the car should have been a world-beater but, in period, was let down mainly by an engine which wasn’t fully production proven – problems that today can be solved with loving ownership as illustrated by the record numbers coming to The Classic.

Adding to the interest, the comprehensive showcase should include a fastback prototype which never made it into production and an intriguing four-wheel-drive version built by GKN and Ferguson Formula Developments (FFD) as a test bed for its 4×4 technology.

“We are honoured that so many wonderful car clubs choose The Classic for their major marque and model celebrations and congratulate the Stag Owners Club in mustering such an incredible gathering of these much-admired automotive icons,” confirmed Nick Wigley, CEO of The Classic’s promoter Goose Live Events.

Three other prized British treasures are also celebrating major milestones at this summer’s 30th birthday Classic. It is 40 years since the time-travelling DeLorean was launched while both the Jaguar E-type and Mini Cooper hit 60 with special anniversary showdowns on the ‘Greatest Hits’ racecard at Silverstone.

All tickets for The Classic must be purchased in advance with adult general admission currently starting at £47 and the price of a three-day weekend ticket £125.

Encouraging families to share in the entertainment, free admission is offered to accompanied children aged 10 and under, while day tickets for those aged between 11 and 15 are priced from just £6.

Ticket-buyers can also book with confidence with tickets carrying a COVID booking guarantee which means that if a change in current Government guidelines prevents spectators attending, all ticket-buyers will have the option to either transfer their ticket to the following year or receive a full refund.