Nearly 1,000 new electric vehicle charge points have been installed at supermarkets in the last 21 months, according to data analysed by Zap-Map and the RAC. 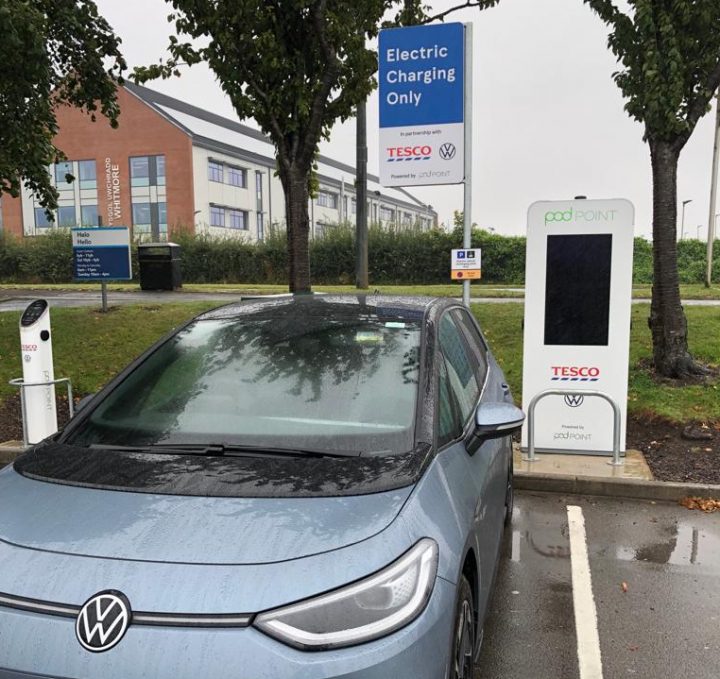 The total number of stores now offering charging facilities for battery-electric and plug-in hybrid vehicles has also more than doubled from 607 in early 2020 to 1,300 in 2021.

Tesco has added more EV chargers than any other supermarket by installing 641 devices, giving it a total of 922 across its 4,008 stores – 676 more than its nearest EV charging rival Asda which has 246 chargers. This means the supermarket giant now has charging facilities at 514 of its sites – 372 more than at the start of last year. However, due to the size of its portfolio it means only 13% of its stores have the capability to charge an EV.

Morrisons installed chargers at 112 stores over the 21 months studied by Zap-Map and the RAC giving it a total of 201 sites with EV facilities– and means 40% of its estate now offers EV charging, the greatest proportion of any supermarket. Its nearest rival Lidl has chargers at a quarter (24%) of its stores after adding EV facilities at 141 locations to give it 203 sites in total. The data shows few supermarkets other than Tesco, Morrisons, Asda and Lidl have, to date, decided to invest heavily in EV chargers for their customers.

The RAC and Zap-Map have both long advocated the importance of supermarkets offering customers charging facilities due to the fact that customers spend around 45 minutes on average in their stores – an ample amount of time to top up an electric car.

The RAC also believes that availability of rapid charge points is vitally important to enabling drivers to make longer journeys conveniently as well as own and run an EV even if they don’t have the facility to easily install a home charger.

Morrisons has more rapid chargers than any other supermarket.

Some 280 more rapid charge points have been installed at supermarkets from the start of 2020 to September 2021, meaning there are now 454 of the devices for EV driving shoppers to use.

Morrisons is leading the way with rapid devices at 40% (197 locations) of its 497 stores compared to nearest rival Lidl which has 150 rapid charging locations, representing 17% of its 860 stores. While Tesco clearly has more chargers of any speed, it currently lags behind Morrisons and Lidl with when it comes to rapids with just 64 – and all but two of those were added since early 2020.

Almost three quarters of EV owners say they are more considerate drivers having made the switch to an electric car, new research from Love my EV reveals, the UK’s only dedicated EV and green energy comparison site.

EV drivers are not only playing a vital role in reducing harmful emissions, but also making roads a safer and more pleasant place to be.

Over two thirds (67 per cent) of EV drivers have completely changed their driving style since moving away from fossil fuels, now less aggressive with their accelerating and braking.  This change in behaviour not only saves drivers money by reducing the frequency or length of battery charge required, but it also benefits the environment as less energy is used and wasted.