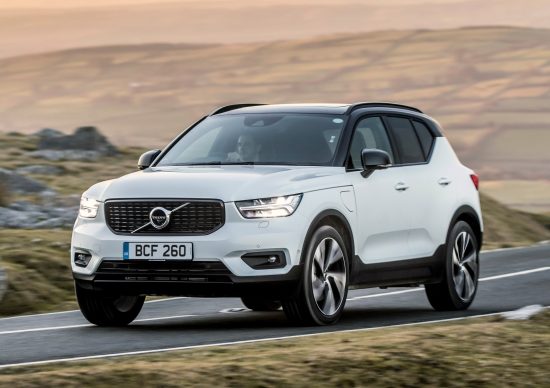 In Europe electrified models outsold diesel powered cars for the first time and the demand for SUVs continues.

Specifically in the UK, in 2020 diesel new car sales dropped to 261,772 whilst pure electric, plug-in hybrids and hybrid models outsold them with 285,199 registrations. Times are changing but petrol car sales still dominated with over, 1,023-million registrations.

Trying to cover all bases many car manufacturers now offer most of these electrified options and petrol and diesel options in their model range line-ups and Volvo with their XC40 compact SUV range is typical.  The XC40 is Volvo’s best selling model range because of this wide spread of power units and it seems to be the right size for these troubled times.

Figures for new car sales in the UK show the Volvo XC40 finished the year in the top ten sales chart in 10th position with 25,023 sales, just behind the new Ford Puma Crossover/SUV with 26,294 sales. The best selling SUV for the year was still the Nissan Qashqai with 33,972 registrations.

The Volvo XC40 compact 5-seater, 5-door SUV was launched in 2017 and the following year it was judged as European Car of the Year and deliveries began to UK customers the same year. 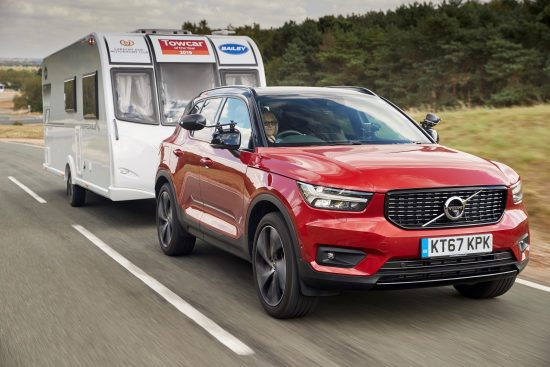 The awards have kept coming for the XC40 and the latest is the UK’s Alternatively Fuelled Towcar of the Year trophy for the T5 Recharge PHEV FWD version which I have recently tried and tested but without a caravan.

The XC40 range has very recently picked up the What Car? magazine’s Family SUV of the Year award for the third time and  Company Car Today media group made the XC40 range their Premium Crossover award winner 2021.

The XC40 range is built in Ghent, Belgium and follows the design language of the mid-sized Volvo XC60 and large XC90 SUVs. The XC40’s key competitors are the Audi Q3, BMW X1/X3, Mercedes GLA and Range Rover Evoque, all available with a variety of powertrain options. Volvo has just announced it is tripling electric car production capacity at its Ghent plant following the doubling of sales for their Recharge models in 2020. 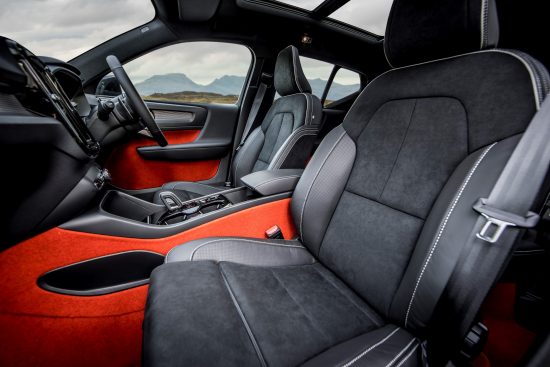 The XC40 is available in Recharge pure electric, Recharge petrol-electric plug-in hybrid or petrol forms. The very new XC40 Recharge Pure Electric P8 is Volvo’s first ever fully electric car, while the plug-in hybrid and petrol versions are powered exclusively by Volvo’s own range of powerful yet efficient Drive-E powertrains.

Sadly no diesel engine option is now included in the range as Volvo says the XC40 is designed primarily for urban environments. 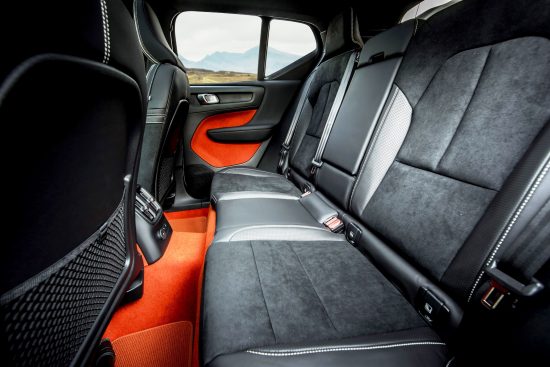 The XC40 is available in two and all-wheel-drive forms and with manual or automatic gearboxes. Who’d think with a 4WD/AWD option there must be some country folk who would appreciate a strong diesel engine option or certainly a high mileage company car driver who doesn’t have time to stop and charge up his PHEV petrol-electric model on a long journey.

The XC40 prices, like the engine options and specification choices, are wide ranging. They start from £25,420 for the lowest powered petrol 2WD manual with the base spec and rise through 32 derivatives to £59,985 for the latest addition to the range – the P8 Pure Electric Recharge AWD automatic with First Edition spec.

Depending on the powertrain choice the spec levels are Momentum Core, Momentum, the sportier spec R-Design and R-Design Pro, First Edition for the P8 pure electric model and the luxurious spec Inscription and Inscription Pro. The R-Design/R-Design Pro levels are the most popular taking 50% of UK sales.

The T2, T3 and Recharge PHEV T4 and T5 versions use as 1.5-litre, 3-cylinder petrol engine whilst the B4 and B5 engines are 2.0-litre, 4-cylinder petrol units. The most popular engine is the non-hybrid T3 163hp turbo petrol unit taking 30% of overall XC40 UK sales. Six speed manual gearboxes are made by Gertrag with the 7 and 8-speed auto boxes supplied by Aison-Warner. The P8 pure electric has a single forward speed + reverse auto transmission.

I was scheduled to test drive the new XC40 Recharge petrol-electric PHEV model a while ago but one of the Covid lockdowns got in the way and the schedule for test cars was halted.  Recently I did however get a XC40 Recharge plug-in hybrid T5 with FWD with R-Design Pro spec and with its standard fit 7-speed auto gearbox. 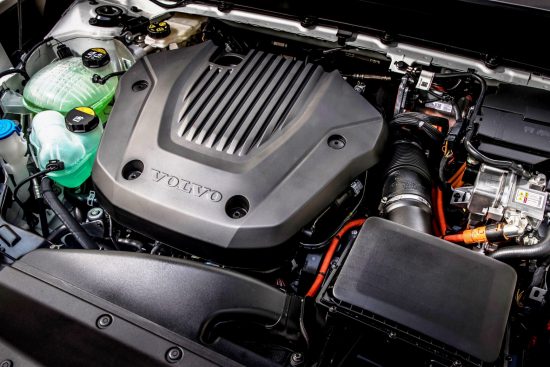 The price is £42,530 for this version which has an excellently smooth 1.5-litre, 3-cylinder 180hp turbo petrol engine assisted by an 82hp electric motor.  But the best selling XC40 T3 1.5-litre turbo petrol 163hp, auto with FWD and the same R-Design Pro spec costs £35,595 which is a big price difference but of course with no hybrid support the fuel and tax costs will be higher.

But with PHEV petrol-electric plug-in models of any make the issue is always the same, plug them in daily and use them for short journeys and the technology works, just use the petrol engine and the fuel economy is no better than a conventional petrol engine, probably worse because the car weighs more with the dormant unused electric gubbins still being carried in the vehicle.

Of course if it’s a company car driver they only want to get the low Benefit-in-Kind tax costs PHEVs provide. A big plus point for most drivers of PHEVs is they never need to have range anxieties about getting stuck without electric power as happens with pure electric cars. Another bonus of PHEVs is a petrol fill-up only takes a few minutes, the battery of a pure electric vehicle needing a recharge takes much longer.

Now I had the XC40 Recharge over the Christmas and New Year holiday period and part of that time we were under the Tier 4 stay at home instructions so driving was limited mainly to local shopping trips. I did legally manage one 160 mile long run with the petrol-electric hybrid system fully charged at start of and that resulted in a figure of 88.8mph for the first half of the journey which was mainly motorway driving. The second part of the journey, with only regenerative braking left to charge the battery, the figure dropped to 35.2mpg for the overall round trip. 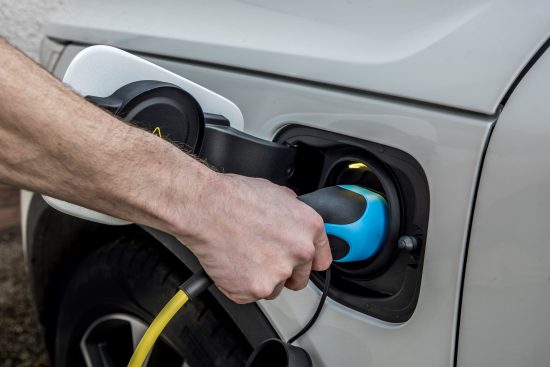 Back home and able to recharge the battery in around 4-hours from a domestic 13amp socket, the overall figure for the test driving loan period was a disappointing 46.8mpg given the official Combined Cycle 117mpg plus figure. By comparison the much cheaper T3, 1.5-litre non hybrid model should return 35 to 38mpg according to official WLTP figures.

Officially the XC40  Recharge T5 FWD  has a WLTP Combined Cycle figure of 117.7 to 134.5mpg  with CO2 emissions of 49g/km, First Year VED road tax is £0, Standard Rate £140 + £325 annually for 5-years as it costs over £40k and BiK company car tax is  12%.  The electric power only driving range is officially 28-miles but even after I had fully charged the battery pack it never showed more than 24-miles and on average it was around 17-miles the vehicle actually covered before the electric power ran out.

I suppose if your daily round trip commute is that figure or less you could get away without using petrol at all which is why Volvo class the XC40 as an urban SUV. What it all goes to prove is there is a powertrain to suit most people’s needs or wants in the latest Volvo XC40 range as long as you don’t want diesel power.

And it measures up for size with good interior front space, enough legroom in the rear for adults and a good sized boot. Visibility is good all round, the seating positions high and access is good. I can see why customers are moving from larger SUVs to these more affordable, easier to live with compact versions.  Certainly in my area of The Cotswolds I see more XC40s now than more expensive XC60/XC90 larger Volvo SUVs. 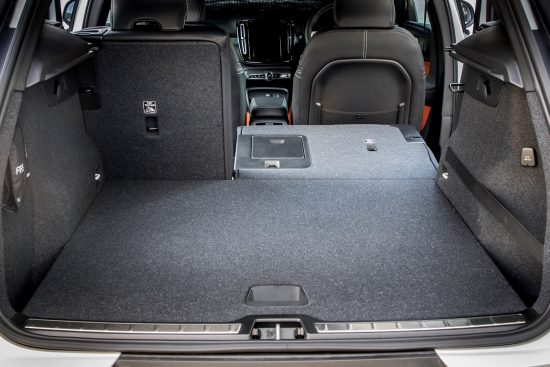 Despite its sports suspension the ride was compliant thanks to the multi-link rear suspension and the handling was precise. The various driving modes and the 7-speed auto gearbox were very useable as was the B setting operated via the gearshift allowing the driver to adjust regenerative braking harvesting.

But star of the show was the 3-cylinder, all aluminium turbo petrol engine.  If you didn’t know it was a triple you wouldn’t distinguish it from a 4-cylinder petrol engine. There was no off-beat 3-cylinder growl, no vibration, no lack of grunt and the 265Nm of torque from just 1,500rpm was of real driving benefit so with seven gears the response and power delivery was impressive.

If this T5 Recharge PHEV version of the X40 doesn’t suit you be sure, if the size is ok, there is another one in the line-up that will, unless of course you must have a diesel engine.  Overall the Volvo XC40 really impressed me but I’m not quite so sure the Recharge PHEV offers enough benefits over a non plug-in petrol model. 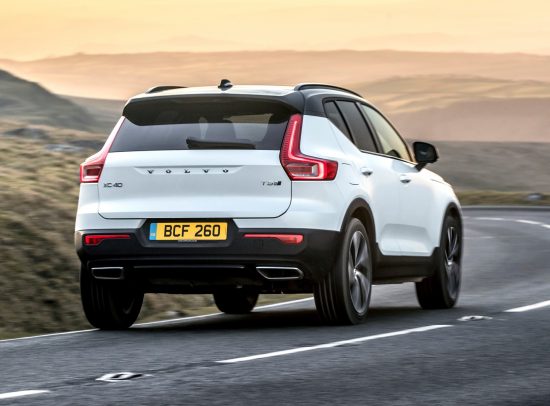 Going for a 1.5-litre petrol version would be cheaper to buy or lease, certainly cheaper for Standard rate VED road tax as it doesn’t incur the over £40k  annual £325 penalty for 5-years and I wouldn’t need to continually find somewhere to plug it into the mains electricity. But today’s new car motoring is just like the tide, electrification is coming in and it won’t stop.

For: XC40 well sized for family/business transport, wide range of power units, classy styling and quality inside and out, lots of driving support and safety systems, high spec – but at a price, refined 3-cylinder petrol engine and strong responsive performance aided by the electric motor, compliant ride, well balanced handling for an SUV

Against: High  Standard rate VED tax costs as it costs over £40k, even with regular electric charging from the mains it was never anywhere near giving the official fuel efficiency  figures, too many functions operated via the sluggish touchscreen,  no diesel engine option, ungenerous warranty.