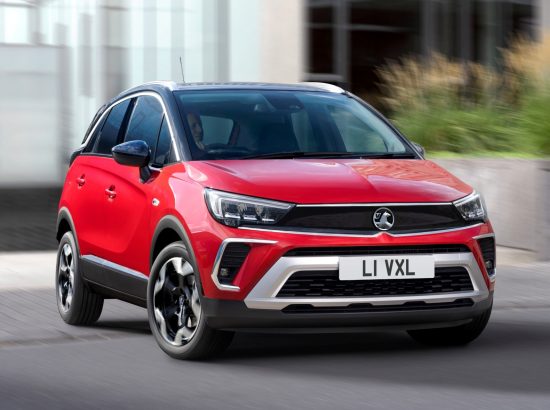 After the latest Covid lockdown some 4,500 franchised car dealerships, plus many more used car centres, opened their showrooms to the buying public, at least dealers were hoping customers would be buying, writes David Miles.

On Monday 12 April, the opening day for the car industry dealerships, shops, pub gardens, hair salons and so on, Vauxhall had a major advertising splash for their new Mokka and Mokka-e compact SUV models seemingly having forgotten they have only recently introduced the new revised Crossland range also of compact SUV models.

I’ve yet to get an official logical answer as to why Vauxhall feels the need to continue with Mokka and Crossland ranges when essentially they compete against each other.

It might be the original Mokka was a product from Vauxhall before the brand was swallowed up by the PSA Peugeot, Citroen Group before that Group became partnered With Fiat, Chrysler, Jeep, Alfa Romeo in a conglomerate called Stellantis which sounds like a mythical Greek island.  Interestingly Vauxhall for both the latest Mokka and Crossland have dropped the X suffix to the model ranges

Mokka has been a very successful model range for Vauxhall, always keenly priced and bought/leased by a brand-loyal group of customers. Crossland and its larger Grandland sibling is based upon Peugeot models with seemingly a different following. Vauxhall’s Crossland is more of a version of the Peugeot 2008 compact SUV and Grandland with similarities to the Peugeot 5008. 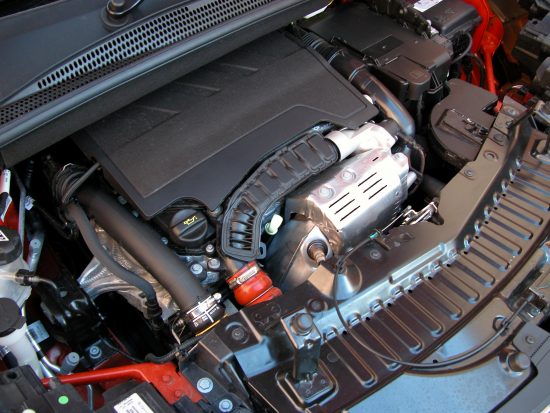 The Crossland is 4,212mm long with a boot/load space, now larger due to a sliding rear seat, ranging from 520 to 1,255-litres with 1.2-litre 83/110/130hp petrol and 1.5-litre 110/120hp turbodiesel engines priced from £19,060 to £27,490.  So Vauxhall customers looking for a compact SUV styled model have a bewildering choice and no doubt price will be a factor although I think the Crossland has the edge for both price and size. So it will be down to the Vauxhall dealership’s sales team to negotiate the actual transaction price and potential customers to haggle hard to get the best price.

My test model was the Vauxhall Crossland 1.2-litre, 130hp turbo petrol engine, very widely used throughout the Stellantis Group brands. I drove the same 1.2-litre unit the previous week in the much larger new Peugeot 5008 7-seater large SUV so this award winning 3-cylinder turbo petrol engine has no shortage of power and with a healthy 230Nm of torque. Drive to the front wheels is through a 6-speed manual gearbox but like all Mokka and Crossland models, although SUV in style, there are no 4WD options.

My test model had the newly introduced SRi spec level and is priced at £23,340 but my test car had the £650 Power Orange two-coat bodywork paint and the £335 Winter Pack of heated front seats and steering wheel. The auto version I prefer with this lovely engine with the same SRi spec costs £24,740 plus the options but it is a 6-speed unit not the newer 8-speed auto used by some other Stellantis Group brands. Depending on the engine chosen there is a huge range of spec levels, SE, SE Nav Premium, the newly added SRi Nav, Elite, Elite Nav and Ultimate Nav.

The revised Crossland features Vauxhall’s latest design language including the new Vauxhall Vizor front-end grille and surrounds that has also been used for the new Mokka.
A single module now runs across the face of the SUV housing LED lights and the new Griffin logo. At the rear are new dark-tinted tail lights and a new high-gloss black tailgate surface gives the latest Crossland a wider looking stance.  The side profile appears much as before with the yesteryear pram style line incorporated in the roof profile and down into the rear quarters.  The roof design at the rear quarters does limit visibility. 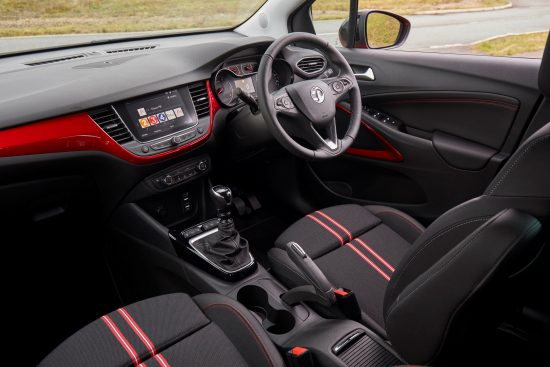 Inside it’s a less cluttered fascia than before with a central touchscreen and thankfully proper heating and ventilation and radio controls beneath it. In all other respects its standard fair although I thought the bright red trim inserts in the door cards and fascia clashed with the  exterior bodywork Power Orange colour particularly around the door frames.

The sliding rear seat  with its 60/40 split folding facility does a good job increasing the boot space from 410 to 520-litres if the rear seats are not being used by adult’s legs.

But in this compact SUV segment, where to my eyes it’s the more senior people who are the main users, it’s what you get for your money that really matters as one SUV is styled very much like another.

The new Crossland starts with SE trim and comes with 16-inch bi-colour wheels and LED headlights with auto lighting. Inside owners get a seven-inch touchscreen with Apple CarPlay and Android Auto plus Lane Departure Warning and Speed Sign Recognition.

The SE Nav Premium trim adds front and rear parking sensors, a reversing camera and LED fog lights. Inside the driver gets a new ergonomic seat for better comfort and Vauxhall’s Multimedia Navi Pro with an eight-inch touchscreen with sat-nav. 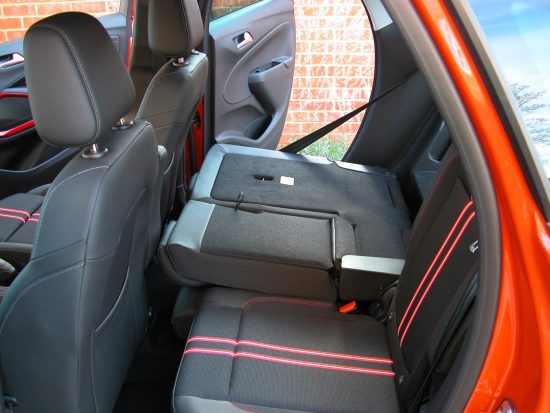 The Elite models have leather seat trim, heated front seats and steering wheel as well as front and rear parking sensors with a rear-view camera. 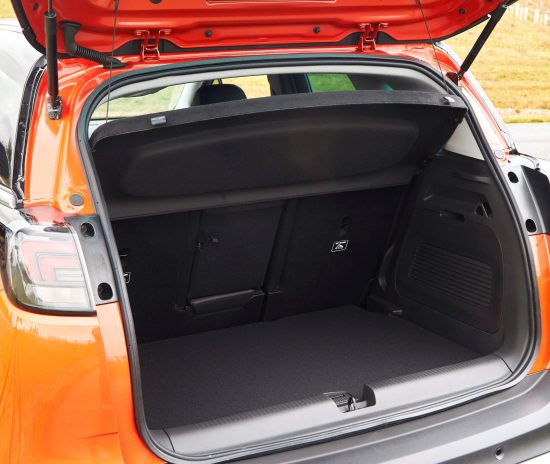 With the array of engines, transmissions and wide spec level choices the new Vauxhall Crossland has a model for most tastes, except if you want an all-electric or hybrid version but with fuel efficient petrol and diesel engines at much less prices – for now why bother to go the electric route with its many difficult functional twists and turns?

My test model had latest WLTP rated Combined Cycle fuel consumption ranging from 48.7 to 49.5mpg and during my week or fairly limited Covid regulations driving over short distances, the real-life figure was 47.4mpg which was excellent  and I would expect to see 50mpg plus on longer cruising speed journeys if not flogged too hard.

The Crossland in its revised and uprated guise is a neat and nimble compact SUV, high seating positions give excellent side and forward visibility with the rear quarters providing marginal views. Not having a rear view camera was not helpful but it did have parking sensors as a fairly limited guide.  My only other negative performance issue was with the firm ride quality with poorer road surfaces unsettling the handling and ride refinement probably due to the sportier SRI Nav spec set-up. 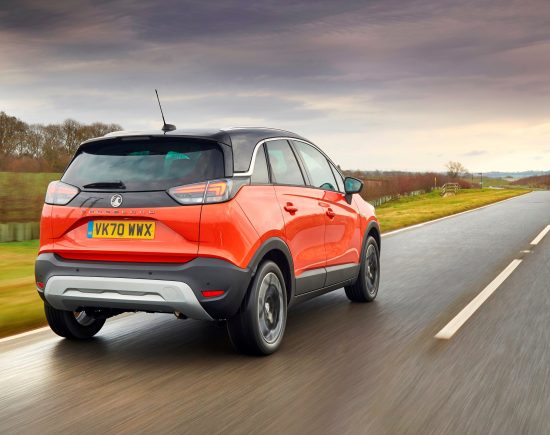 I handed bask the Vauxhall Crossland still confused as to why Vauxhall still think they need the similar sized Mokka with petrol and diesel engines, why not just sell it as the Mokka all-electric version. This is a powertrain the Crossland doesn’t offer so differentiating the Crossland and Mokka ranges and simplifying the  choice us customers have for similar sized models from many, many brands.