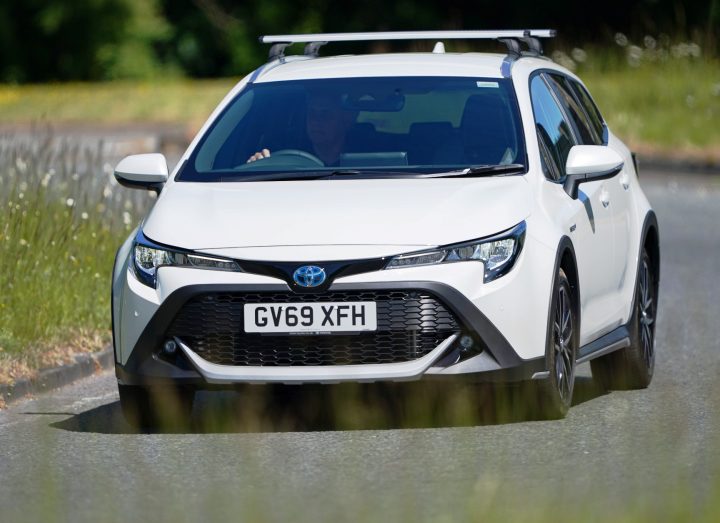 With staycations forced upon many of us due to the pandemic lockdown on overseas travel, activity holidays in the UK are at record levels whether it involves hotels, B&Bs, caravanning, camping, glamping, boating or hiking, writes David Miles.

UK sales and rentals of motorhomes, caravans, campers, tents and even Shepherd’s Huts are booming. With long term overseas travel restrictions unclear, UK activity holidays are likely to become the ‘norm’ for the long-term unless the recent Storm Francis has dampened domestic holiday thoughts.

Nevertheless many people now need to get-out-and-about have re-found family country pursuits such as hiking, cycling, swimming and beach-ing, so we might now need to consider our future family motoring needs. This might further strengthen the appeal of SUVs or roomy estate cars or something in between like the new Toyota Corolla Trek.

The Toyota Corolla range, the replacement for the Auris a year or so ago, features 5-door Hatchback and Touring Sports estate models built in the UK and 4-door Saloons built in Turkey. The new activity lifestyle Trek version is based on the Touring Sports body style. 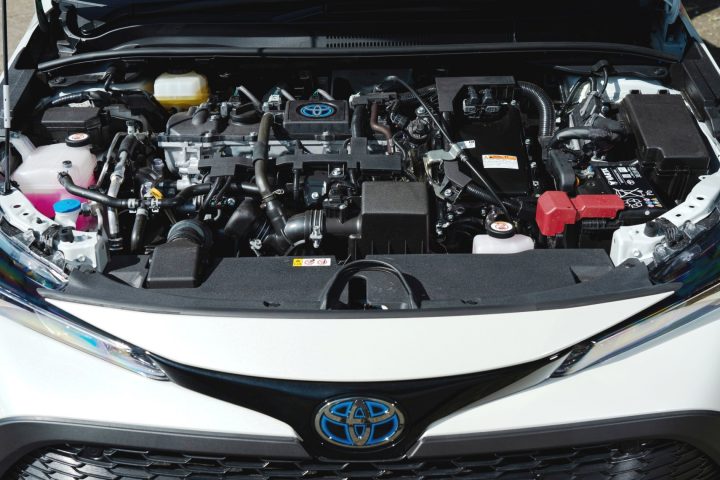 All Corolla models are self-charging petrol/electric hybrid powered with the Hatchback and Touring Sports versions offering customers the choice of 1.8 VVT-i 122hp or 2.0 VVT-i 184hp units whilst the Saloon is only available with the 1.8 hybrid unit.  All versions have a CVT auto transmission and all have front wheel drive.

The 2020 model year mainstay Corolla range gives the customer the choice of the usual Toyota main core spec levels of Icon, Design, the new GR Sport and Excel depending on body style but the new Trek Touring Sports is a standalone spec level.  Prices for the range start at £24,185 and go through 32 derivatives topping out at £31,735. The Trek 1.8 Hybrid costs £29,225 and the Trek 2. 0 Hybrid costs £30,950.

So how does the Trek differ from the Touring Sports model on which it is based? This activity model celebrates a partnership between Toyota and the internationally renowned bicycle manufacturer TREK.

The Trek estate stands apart from the rest of the range with its SUV-influenced look with the suspension raised by 20mm for improved ground clearance away from tarmac surfaces. In addition exterior styling details have been added including black edging for the front and rear bumpers, silver-finished front and rear under body shields and black wheel arch mouldings.  There’s a new black contrast design for the 17-inch alloy wheels and Trek badging on the tailgate, plus rear privacy glass, a honeycomb pattern grille and LED headlights.

The interior features further special detailing including Trek branded scuff plates, two-tone brown and grey fabric upholstery and  wood-finish trim on the dashboard. The specification matches the regular Corolla Design grade with the addition of a power
tailgate with kick sensor and it also adopts the new Toyota multimedia system with smartphone integration functions. 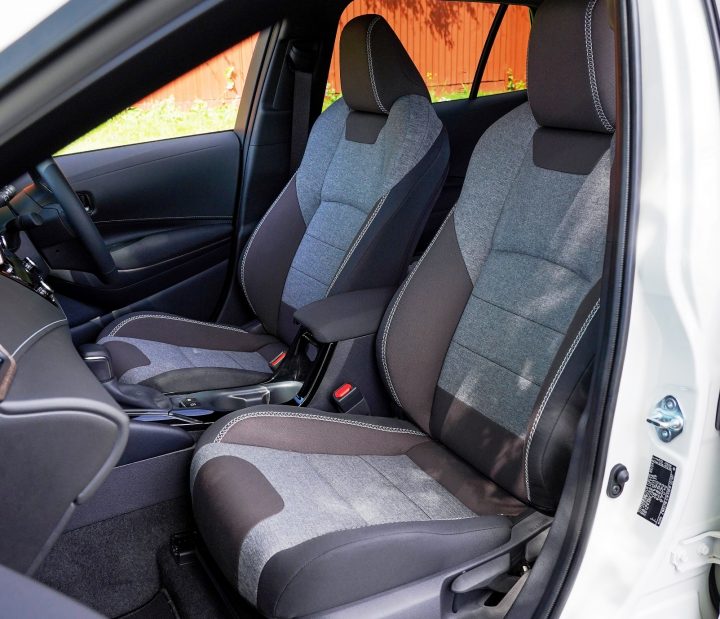 My Corolla Touring Sports Trek version was the 1.8-litre hybrid with 122hp hybrid system priced at £29,225, that’s £1,675 more than the Design grade model on which it is based due to the added styling kit and specification.

Since its launch the Corolla range of models has been well received, easily replacing the loyalty shown to the outgoing Auris range.

The Corolla, apart from most models being built in Britain, has been praised for its use of self-charging hybrid  powertrains, it is roomy, comfortable and in its C-sector family car market a popular buy with close to 16,000 finding UK homes last year.

Now with changing lifestyle and work uses forced upon us, the Trek estate hybrid versions should appeal to a wider buying audience. The Trek is not alone of course, 4×4 estates, even saloons/hatchbacks are now relatively commonplace; think Audi, BMW, Mercedes, Subaru, Volvo plus of course Ford with their Fiesta and Focus 2WD Active models,  most mainstream manufacturers now  have models bridging the gap between conventional passenger cars, Crossovers and SUVs. 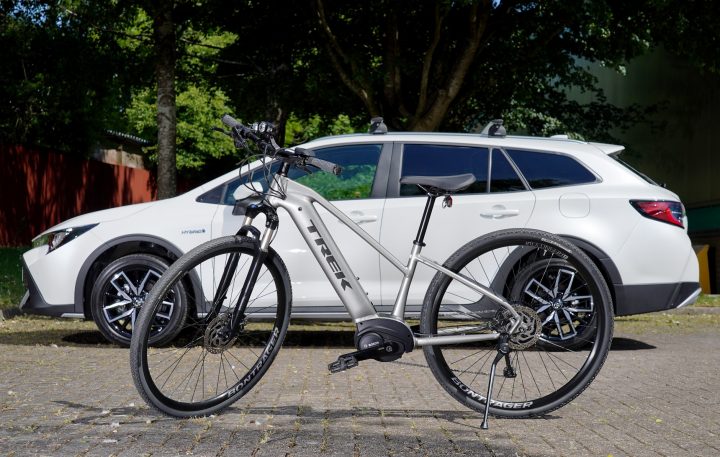 But in its sector practicality has to be a prerequisite. Will the Trek fit the bill as far as passenger and load space? It’s 4,650mm long, 1,805mm wide and 1,455mm high with a longer wheelbase than the Hatchback of 2,700mm so rear seat legroom in its class is good.

It’s a roomy vehicle with  a boot capacity of 598-litres with the rear seats backs in place  and 1,600-litres with them folded down  and of course with the roof trails there is more carrying capacity up-top. However as it’s a hybrid the braked towing capacity is only 750kg so touring caravan owners will need to look elsewhere but trailer tents and suchlike will be towable.

Whilst other manufacturers have these ‘lifestyle’ estates, it’s the Corolla Trek that is different with its self-charging hybrid powertrain which is used widely on other models in the Toyota model line-ups.  With a total power output of 122hp the 1.8-litre, 4-cylinder VVT-i, DOHC petrol engine and 53kW electric motor the performance is modest with a 112mph top speed. 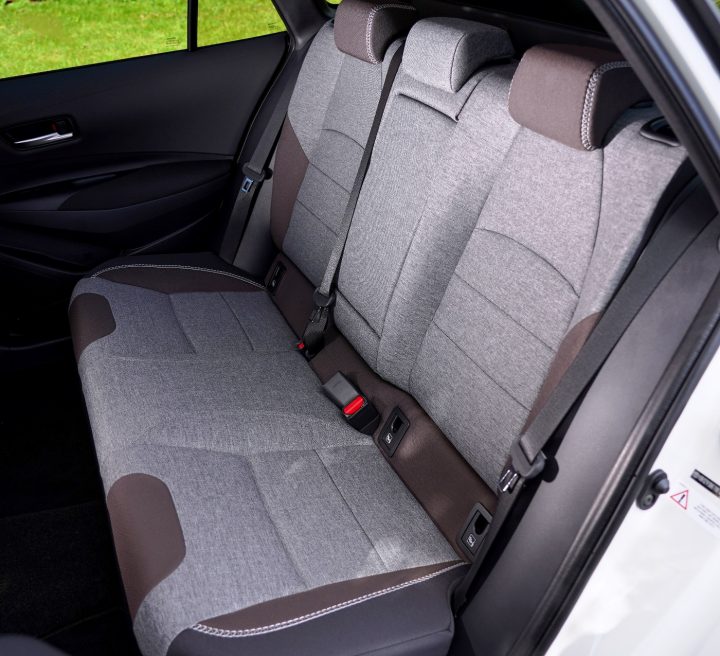 The latest WLTP Combined Cycle fuel economy figures for the Trek 1.8 are 55.42 to 56.40mpg, probably the sort of economy you would get from a diesel powered model if there was such a thing. The CO2 emissions are 113g/km so being classed as an Alternatively Fuelled car means a First Year VED road tax cost of £165 and then £140 for the Standard rate. Company car drivers will pay 25% Benefit-in-Kind tax.

Being called a self charging hybrid by Toyota means the lithium-ion battery is charged mainly by regenerative braking, it’s not a plug-in hybrid. In normal acceleration and driving conditions the electric motor starts the move away from standstill with the engine starting its work from around 30mph and onwards at a leisurely pace. 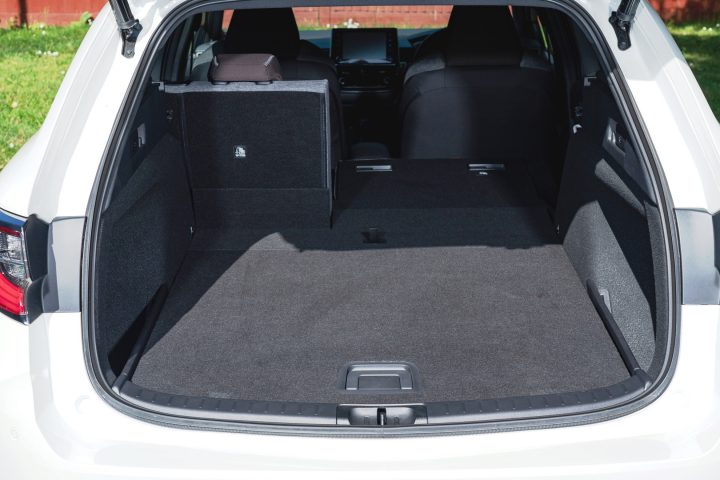 Sometimes the electric motor takes over from the engine without being noticed because the powertrain noise at low speeds is well insulated from the cabin.

It does get far noisier when the accelerator is given a sharp prod to rapidly increase acceleration for overtaking and the petrol engine revs rise sharply.

Unfortunately the speed increase is not relative to the increase in noise levels and it’s not an involving powertrain to use but it is a fuel efficient one.

The ride comfort is very good and the handling taught with little cornering body-roll despite its increase in ride-height over the standard Touring Sports models.  The steering is precise, predictable although a little on the light side at low speeds but it makes for easy driving.

Other changes to the latest Corolla models are a supposedly improved infotainment system often seen as a weak-link in various Toyota models. The 8-inch touchscreen sits high-up on the dashboard but its operations are slow and clunky and relatively basic compared to many other competitor models. 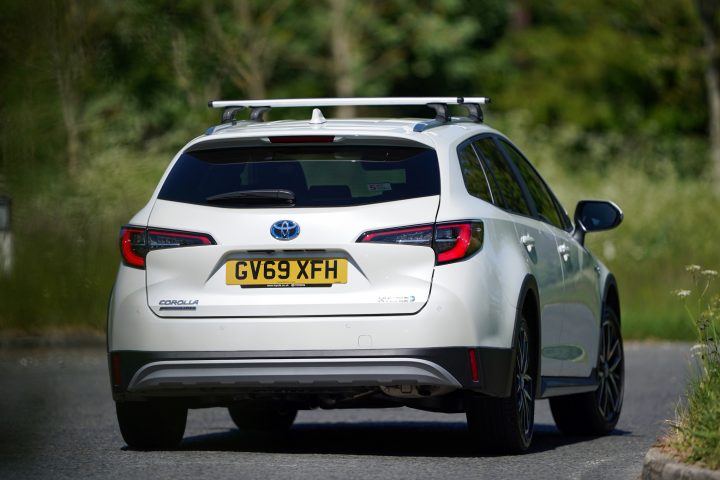 The Apple CarPlay function has been added to the Toyota system, so a smartphone is an alternative operating option.  Otherwise the Trek’s interior is smartly finished, well laid out, has very good safety and driving support features as standard, it’s comfortable and roomy for the family.

Whether its off-road inspired styling is worth the extra money over a conventional Corolla Touring Sports Hybrid estate will be about making a lifestyle motoring choice and how deep your pockets are.

Against: Only 2WD traction despite its mild off-road styling, engine becomes noisy during hard acceleration, limited braked towing weight for a recreational vehicle, some will see it as too pricey over non Trek spec versions.