While other manufacturers have used the Hybrid and plug-in hybrid paths to full electric mobility, Renault took a different route 10-years ago, writes David Miles.

Their first all-electric model, the Twizy, was an oddball tandem two seater city car and on the electrification path followed the compact hatchback Renault Zoe – the best selling electric car in the EU. Renault say they are the EU’s best selling EV manufacturer of cars and vans with over 300,000 customers to date during this decade of electrification.

Now, or in the near future before the end of this year, three more Renault electrified models will join the UK line-up. These new versions are labelled Renault E-Tech Hybrid models which made their international media debut under COVID-19 restrictions for the UK Press last week in Buckinghamshire rather than France. Instead of us media types going to France to drive the new models, the left hand drive cars came to us in, at the time, stormy UK.

All models are powered by a new normally aspirated 1.6-litre, 4-cylinder petrol engine with two power outputs – 140hp for the Clio Hybrid and 160hp for the Captur and Megane PHEVs plug-in hybrids. Renault said this non-turbo engine has been specifically developed for E-Tech use.

Whether its plug-in or pure hybrid the E-Tech drivetrain includes two electric motors positioned within the automatic transmission.  One motor is a starter/generator, the other an E-Motor which provides the propulsion power to assist the petrol engine.  Both systems use regenerative braking energy capture which can be further increased by selecting the B-mode on the drive selector lever during braking, deceleration or downhill driving.  The Clio Hybrid has a 1.2kWh battery and the PHEV models use a 9.8kWh battery and in both instances these are mounted under the rear seats so as to not reduce the boot space. The E-Tech transmission/powertrain was developed using knowledge gained from Renault’s World F1 Team and the technology includes the use of a clutchless automatic gearbox for fast and smooth gearchanges.

The E-Tech models use Renaults new modular CMF-B (Clio) and CMF-C/D (Captur/Megane) platforms and the architecture/platform were designed for electrification from the start as well as accommodating petrol and diesel models.

A free home charging wallbox is available for UK customers purchasing either a new Captur or new Megane E-Tech PHEV model. The PHEV models come with two charging cables as standard, one for domestic 13amp charging, the other for wallbox and other charging points.  Charging to full capacity takes between 3-4 hours depending on the power supply used and no rapid charging is needed due to those relatively short times.

All Renault models come with a 5-year warranty with unlimited mileage limit in the first two years, while those with E-Tech powertrains come with an 8-year battery warranty. 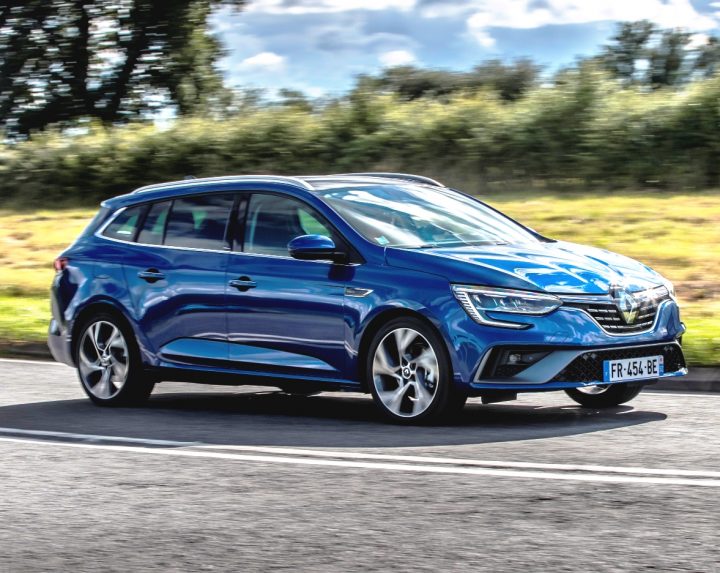 Renault Megane E-Tech Sports Tourer PHEV
My first test drive of Renault’s E-Tech PHEV hybrid system was in the Megane Sports Tourer estate with the new R.S Line spec level priced at £32,085 although there is a cheaper Iconic spec version for £2k less.  Now the Megane doesn’t have a very large sales acceptance in the UK in its C-segment which has been hard-hit for most manufacturers by the demand for SUVs.

The Megane only sells around 2,000 units a year in the UK and 80% of those are Hatchbacks so I’m not in the best selling Megane E-Tech version.

However the Megane PHEV estate might change all that because of its appeal in the company car and fleet business markets and 90% of Megane sales already go to these customers. The 447-litre boot with the rear seats in place will be appreciated as well by company car and family users. With a 217mpg potential, a 30-mile electric only driving range with CO2 emissions of 30g/km company car tax is the just 10% and VED zero cost. The PHEV Meganes should become the mainstay of this range which was first introduced in 2004 with close to 24,000 UK sales to date.  The more popular Hatchback version will join the new model line-up in April so that should bring a further boost to the sales potential. 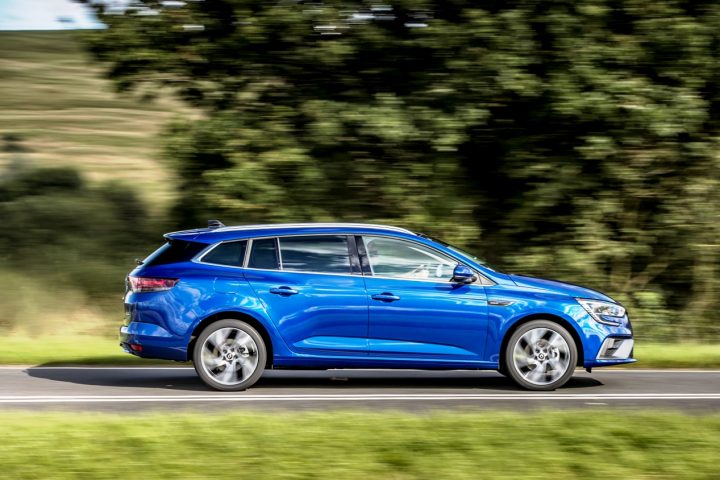 I cannot remember the last time I drove a Megane of any description.

However the new E-Tech models brings a new opportunity to sample Megane  and the new 1.6-litre 4-cylinder, 160hp petrol engine   with twin electric motors cleverly positioned within the auto quick shifting gearbox thanks to F1 knowhow is as good as any of these systems on the market today.   The top speed is 111mph and the zero to 62mph acceleration time is 9.8-seconds. Because the electric driving motor assists the petrol engine providing 205Nm of torque from its first revolution, instant acceleration is quick and it felt strong through the initial stage before the engine silently came on-song. 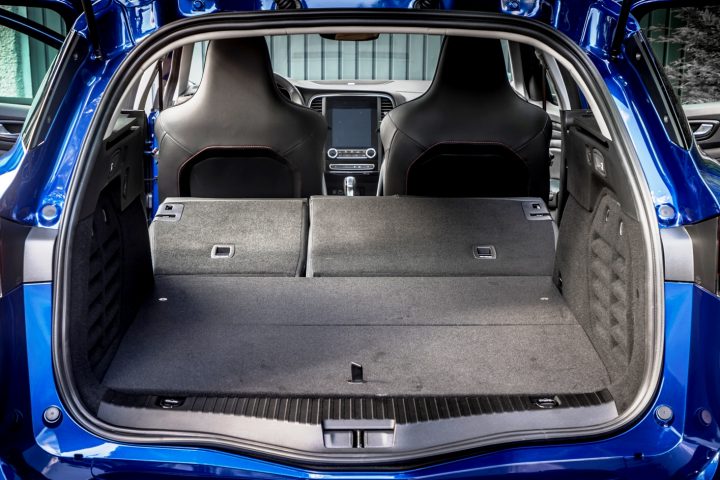 Officially the WLTP fuel economy figure says 217.2mpg but we know these like all other PHEVs are far from reality and for my 40-mile test drive around the Storm Francis ravaged country roads and traffic heavy main roads of Buckinghamshire, the test car returned 88.28mpg which is better than turbodiesel territory. 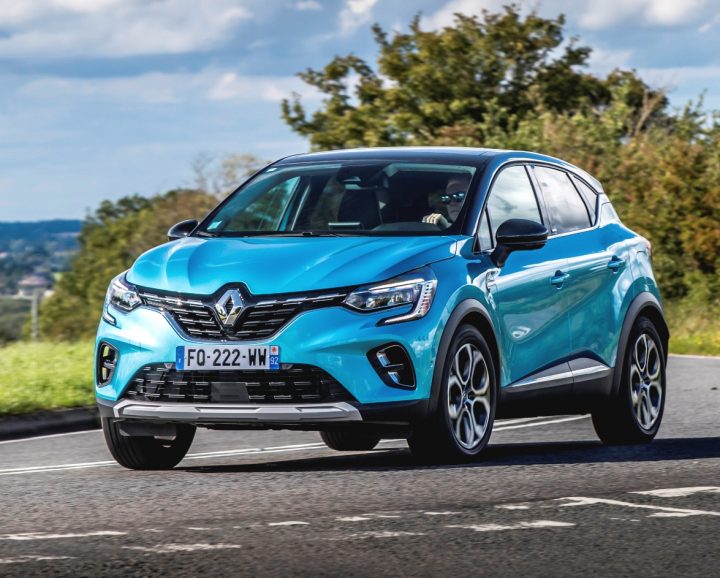 The Captur was first launched in 2013 and global sales to date are more than 1.5-million.

Renault UK say the Captur PHEV, priced from £30,495 for the S Edition and £30,995 for the Launch Edition,  are the most affordable small PHEVs on the market  with the MINI Countryman PHEV and Kia Niro PHEV being its main competitors.  They expect PHEV models to account for around 10% of total Captur UK sales. Around 65% of Captur sales already go to business/fleet customers.

The Captur PHEV uses the same hybrid 1.6-litre 160hp petrol engine and two electric motors positioned within the auto transmission as the Megane Sports Tourer PHEV.  There is the same 205Nm torque output as well. It also has a 30-mile all-electric power driving range, CO2 emissions of 34g/km and an official WLTP Combined Cycle 188.3mpg.  The BiK company car tax is 10% and VED road tax is £0.

On the same test route as I used for the Megane PHEV the Captur PHEV returned 100.9mpg which was better by some way than the Megane PHEV although the official WLTP figures show the Megane to be more fuel efficient. The heavy traffic conditions were the same as was the very poor weather.

The vehicle also has the MultiSense driving modes where the Pure mode is zero-emission all-electric driving, MySense is the optimised hybrid driving mode and Sport is the most responsive with full power from the engine and electric motor. The top speed is 107mph with zero to 62mph taking 10.1-seconds.

Other than having a more elevated driving position in the Captur over the Megane estate there was little different in its driving performance but perhaps more body roll during cornering  due to its higher ground clearance and it had a firmer ride. 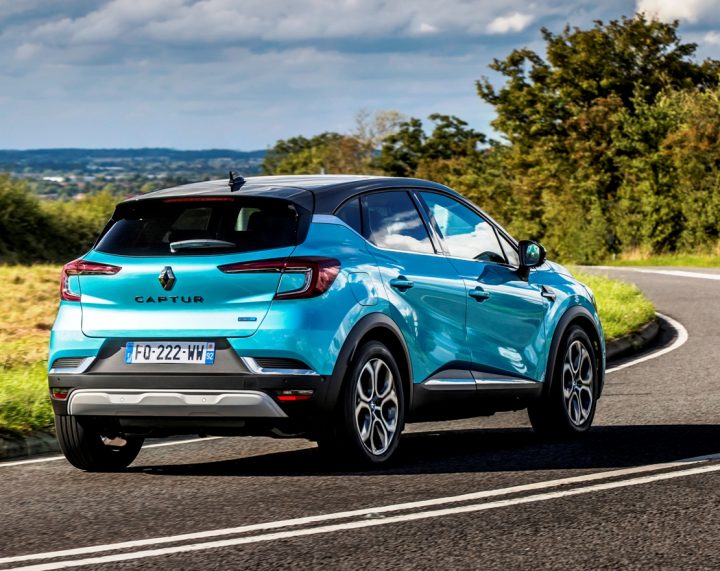 For the Launch Edition version I tried the spec includes Adaptive Cruise Control with Stop & Go, Traffic and Motorway Alert, Blind Spot, Traffic Sign Recognition, Lane Departure Warning, Lane Keep Assist, LED Headlights, Parking 360 degree Camera and front and rear parking sensors. Captur is a well designed package inside and out and the introduction of electrified PHEV versions will add to its popularity. 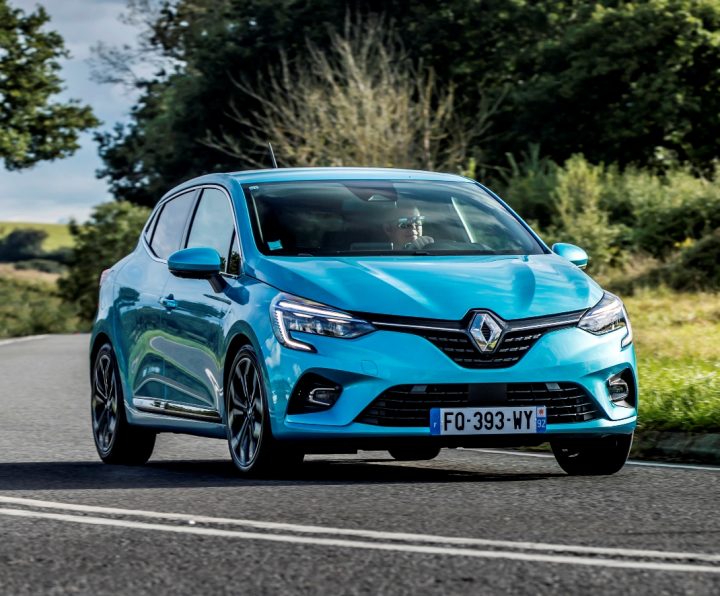 Renault Clio Hybrid
The new Renault Clio is the fifth generation spanning 30-years and in the UK it is the brand’s second highest selling model range after the Captur with close to 20,000 units a year. Around 60% of these sales, as you might expect for a 5-door supermini sized hatchback, go to retail customers. More than 650,000 of them have been sold in the UK in 30 years.

The new addition to the Clio range are E-Tech Hybrid 140 Auto versions  and will become available with Play, Iconic, S Edition, R.S. Line and Launch Edition spec levels. Prices range from £19,595 up to £22,095.

Unlike the Megane and Captur PHEV plug-in hybrid models the Clio Hybrid is what we know as a self-charging hybrid relying on regenerative energy capture via braking and during engine overrun periods to charge the battery.

This version of the new 1.6-litre petrol engine produces 140hp, again it uses the automatic transmission incorporating the same two electric motors and it has a compact 1.2kWh lithium-ion battery.

This hybrid unit returns an official WLTP rated 64.2mpg and on my test drive route of main and winding country roads the figure was 62mpg.  The CO2 figure is 98g/km so First Year VED costs £125 and company car BiK tax is 22%. The top speed is 122mph with zero to 62mph taking 9.9-seconds.

Renault says the Clio Hybrid has the ability to complete 80% of urban journeys in 100% electric power only driving mode. This will save they say 40% in fuel costs and even in electric mode it can still travel at speeds up to 27mph.

It has MySense hybrid, Eco and Sport selectable driving modes. The petrol non-turbo engine plus electric motor’s joint performance with 140hp is still a punchy responsive unit in this 5-door supermini sized hatchback with its 300-litre boot. Matched with the slick and fast changing auto gearbox it’s a neat handling and nimble car, ideal for commuting travel where hybrids and plug-in hybrids work at their best.  On long motorway trips they do not cope as well for fuel economy when battery power ebbs away.  Ride comfort was generally good.

Customers will not be short-changed with the new Clio Hybrid with its Smart Cockpit, 9.3-inch vertical multimedia touchscreen, 10-inch TFT instrument screen and Easy-Link connected multimedia services + My Renault App.  There are the usual safety and navigation features as well. 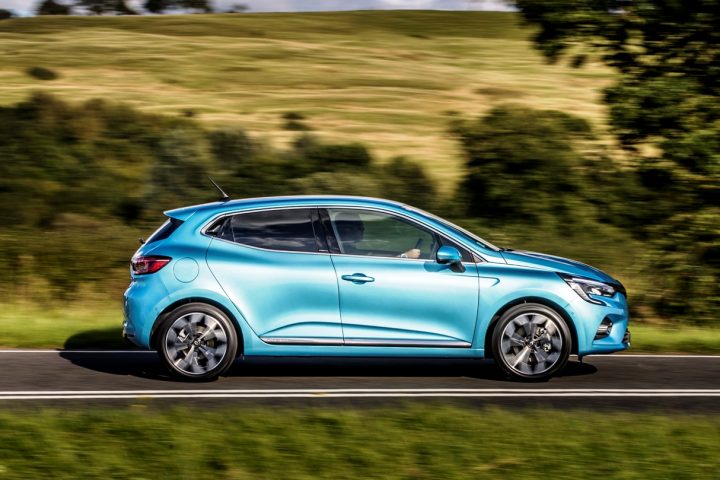 Even my Clio Hybrid Launch Edition top of the range test drive model looked a good value proposition at £22,095.

It is certainly a viable option for some users to other new generation petrol and diesel models which cost from around £15k to just over £21k.