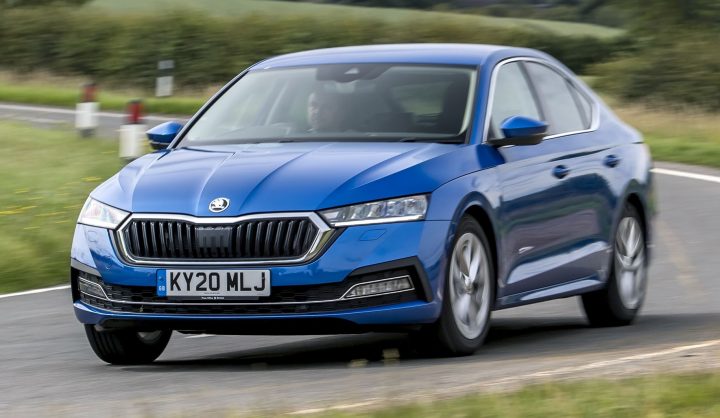 The Octavia has been a huge global sales success but UK buyers have had a strong association with the models with over 500,000 sold here since the first generation global sales models arrived in 1996. However the Octavia name goes back further to 1959 when it was launched in its own domestic market.

The name Octavia is derived from the Latin word eight as it marked the eighth post war car built by Skoda. With 61 years of history behind Octavia with over 6.5-million sales now the fourth generation models are here and ready to continue their record as Skoda’s top selling range.

In their 125thanniversary year since they were founded, it is opportune to just remind ourselves about the history of Skoda Auto. Founded in 1895 Skoda is one of the longest-established car manufacturers in the world. It currently offers its customers nine passenger-car series: the Citigo, Fabia, Rapid, Scala, Octavia and Superb in addition to the Kamiq, Karoq and Kodiaq SUVs. The company delivered 1.24 million vehicles to customers around the world in 2019. 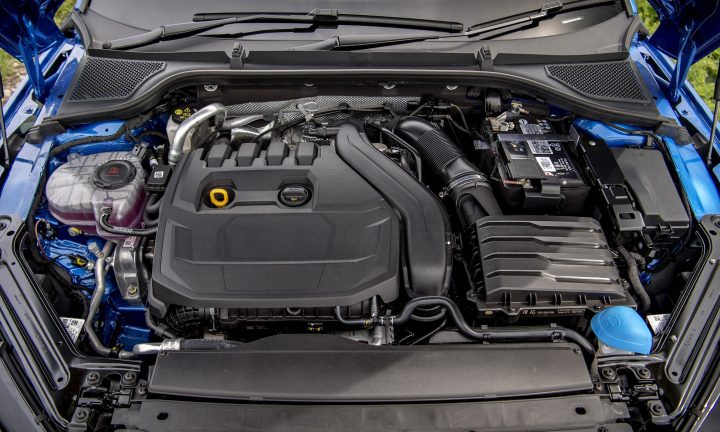 Importantly, Skoda Auto has been part of the Volkswagen Group since 1991.In association with the Group, Škoda Auto independently develops and manufactures vehicles, as well as components such as engines and transmissions.

It operates at three locations in the Czech Republic; manufactures in China, Russia, Slovakia and India mainly through Group partnerships as well as in Ukraine and Kazakhstan with local partners. It employs approximately 42,000 people globally and is active in more than 100 markets.

My past experience with the Skoda Octavia I have to admit has over the years made it one of my favourite family cars, suitable for domestic and work duties. It particularly shines because of its size relative to its price and included standard specification. In its sector it has always been the roomiest of models and usually the best value for money.

Nothing seems to have changed in that direction, this generation of Hatch and Estate models are larger and the prices at least competitive if now not a great deal less than the competition.  The new Octavia still sits between the C and D sized passenger car sectors competing against the likes of the VW Golf, Ford Focus, SEAT Leon, Toyota Corolla, Skoda Scala, Audi A3 and BMW 1 Series but also against larger D segment models such as  Skoda’s own Superb, Audi A4, BMW 3 Series and the VW Passat. It crosses size boundaries and pricing structures.

First the all-important matter in today’s troubled market of pricing and at this point I must say the initial line-up of models is limited  with vRS, 4×4, plug-in hybrid and hybrid versions to come and with  more spec levels. Initially the Hatch is priced from £22,390 to £28,460 and the Estate from £23,370 to £29,540. 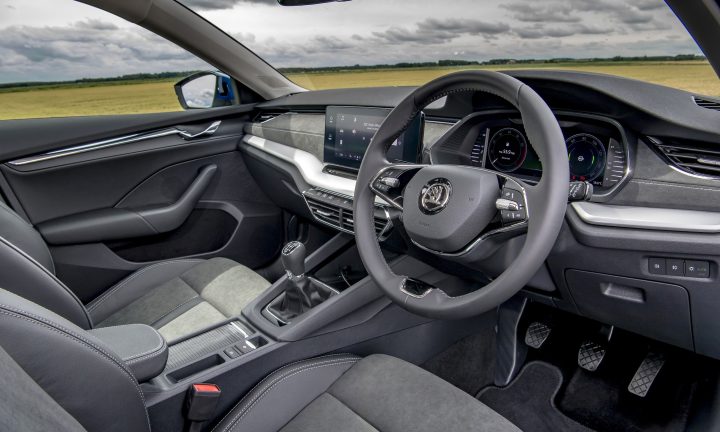 These are the1.5 TSI 150hp petrol with cylinder deactivation with a manual gearbox.

There is the choice of two 2.0-litre TDI turbodiesel units, the 115hp manual and the 150hp with a twin-clutch DSG auto gearbox as standard. With two diesel engine options it shows that the Octavia will remain, initially at least, a high mileage business user’s vehicle until PHEV and Hybrid versions come along plus a 1.0-litre TSI 110hp petrol unit.

Now on to another of the Octavia’s strong selling points – size. The new Hatch has a length of 4,689mm 19mm longer than its predecessor, while the Estate is 22mm longer than before and now also 4,689mm. Their width has also increased by 15mm.   With a long wheelbase of 2,686mm both models impressively measure up for rear seat legroom for adults as well as children. The Octavia uses an evolution of the VW Group MQB platform which provides the facility for a longer wheelbase and more bodywork overhang at the rear for a larger boot/load area.

The Hatch has a boot capacity of 600-litres – 10-litres more than the previous model increasing to a very useful 1,555-litres with the rear seat backs folded down.

The new Skoda Octavia has the styling hallmarks of the previous generation, another case of evolution over revolution following Skoda’s philosophy of being ‘Simply Clever’, it’s not broke – don’t fix it in other words.

There is a revised front end with new grille, bumper and razor-sharp narrower headlights featuring LED technology for low beam, high beam and daytime running lights as standard. The tail lights, brake lights and fog lights make use of LED technology as well. The newly

designed roof rails emphasise the elongated silhouette of the Octavia Estate while the Hatch has a slight coupe roof profile which doesn’t restrict rear passenger headroom.  In between the front and rear ends of Hatch and Estate versions are sharp continuous styling lines and sculptured panels which emphasise the Octavia’s length as well as enhancing its kerb appeal improving its up-market status. 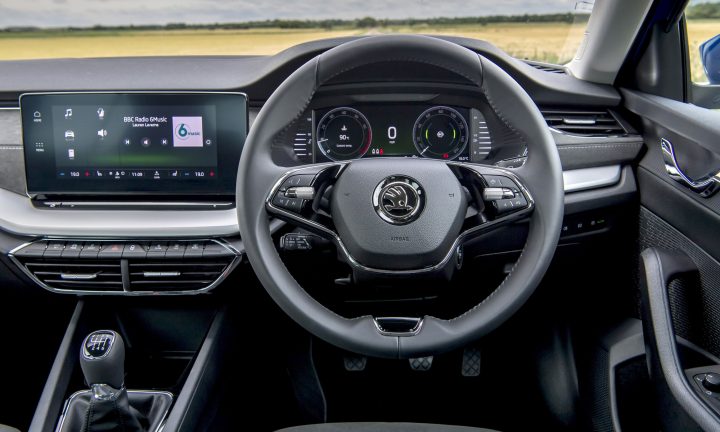 Inside there is a new multi-level dashboard arrangement with the 10.25-inch touchscreen mounted centre and high up on the virtual cockpit dashboard. Below that is a line of buttons to control various functions including the driving mode selector, Park Assist and a short-cut to the air con settings.

The smart looking new two-spoke steering wheel, which can be heated as an option, has new control buttons and knurled scroll wheels allowing drivers to operate a total of 14 different functions without removing their hands to operate the touchscreen most of the time

A combination of chrome trim inserts, chrome door handles, a neat centre console plus soft-touch trim materials. The LED ambient lighting multi-colour combination functions operate for the front doors, footwells and dashboard and give the new Octavia a premium look and feel in keeping with its inevitable move upmarket.

I’m not going to trawl through the huge list of spec items, including the latest connectivity and driving safety and support systems and 17-inch alloy wheels plus there is a long list of additional costs options. Suffice to say, even with just the two initial trim levels, the spec and equipment is high and most of it can also be found on other VW Group brand’s models. 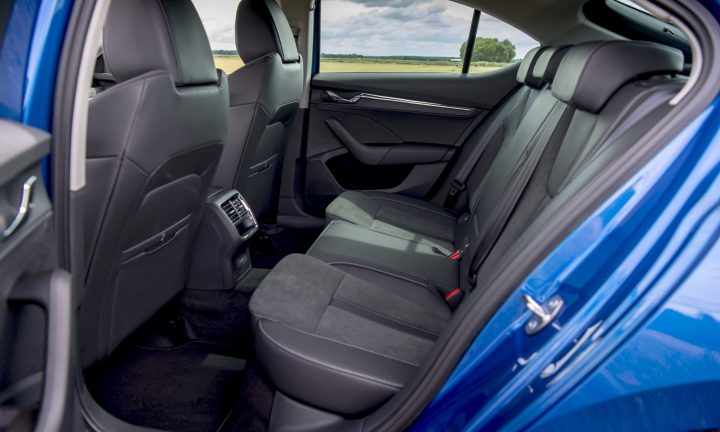 Given its size, spaciousness, quality, styling inside and out and driving performance I think proves the new Octavia remains a fair bargain and in these uncertain times that makes Skoda’s Simply Clever marketing theme very appropriate.

Behind the wheel I always get the impression with past Octavia models that I’m driving a bigger and better car than most of its direct C-segment competitors, certainly better for space and value for money.

The handling is sound, predictable and the ride generally comfortable although I wouldn’t recommend the optional 18-inch alloy wheels fitted to my test car. They firmed up the ride at times with their lower profile tyres which couldn’t effectively absorb thumps, bumps and noisy pothole impacts – stay with the standard 17-inch ones and save money as well.

The 2.0-litre TDI turbodiesel engine we know from past experiences and it has been the workhorse unit for most VW Group brands. In its latest updated form with new low emission controls the power output remains at 150hp but with a massive 340Nm of torque from the usual 1,750rpm. 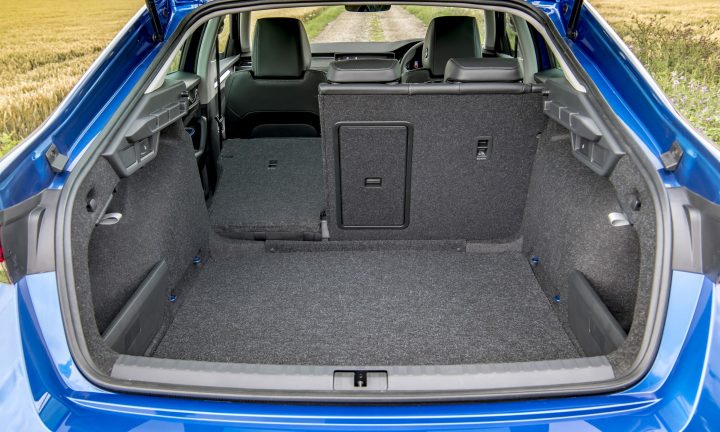 The 4-cylinder unit still sounds a little gruff on start up but once warm the noise dies away and coupled with the ideal 7-speed DSG auto gearbox driving becomes calm. Not that the engine/gearbox combination is docile because it contains a lot of potential.

This revised unit also shines for fuel economy. Under the new WLTP testing procedure the Combined Cycle, depending on spec, ranges from 52.3 to 61.4mpg. and my test car after a week of mainly short runs with one long journey included produced 58.9mpg which is brilliant. Even cruising to and from my local town saw 54.4mpg recorded day-in, day- out. 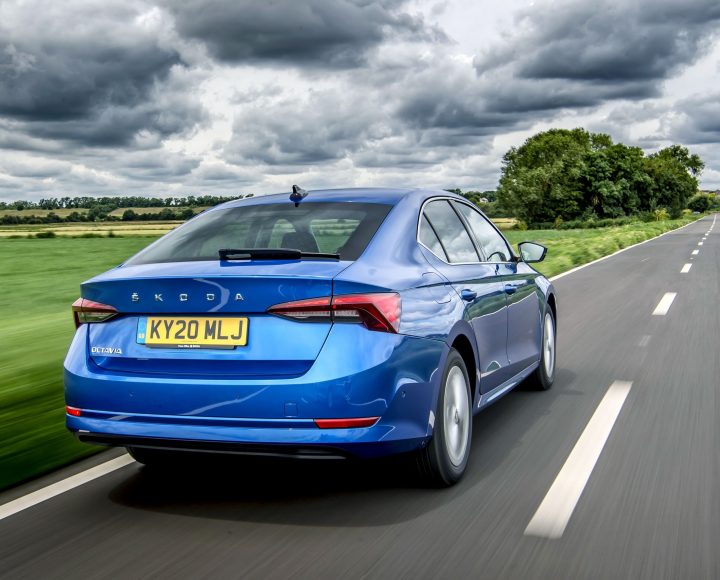 You will also get sharp styling and high spec levels as well.

As Skoda says ‘Simply Clever’ and good news there are more clever versions to come.