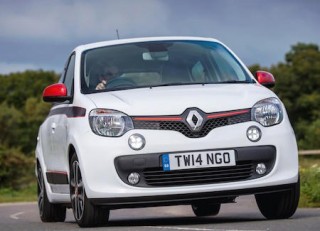 But only around 85,000 of them were sold in the UK last year and the Fiat 500 family is the only City Car to appear in the UK’s top ten sales chart.

Customers prefer the roomier ‘Supermini’ sector which sold ten times as many cars last year compared to City Cars and are not that much more expensive to buy.

Launched in September last year Renault’s compact five door rear wheel drive City Car range is priced from £9,495 and goes up to £12 545.  Apart from the Fiat 500 it has to compete in an oversupplied market sector with the Hyundai i10, Peugeot 108, Skoda Citigo, VW Up, Seat Mii, Toyota Aygo, Suzuki Celerio and Vauxhall Adam to name just a few.

Another of its competitors is the more expensive Smart ForFour which is built on the same platform with the same engine options and in the same factory in Revoz, Slovenia.

The third generation Twingo is offered with the choice of two petrol engines, both three cylinder units.  The first is a 1.0-litre naturally aspirated 70hp version and the second a 900cc, 90hp turbocharged unit.  There are five models in the line-up; the 70bhp engine with Expression and Play specification, the 70bhp unit with Stop & Start in Dynamique spec and the 90hp turbo Dynamique and Dynamique S with Stop & Start. All have a five-speed manual gearbox but a sequential automatic will be added to the 90hp model options from September 2015.

In addition to the core equipment levels there is a huge range of personalisation options from chic interior and exterior style packs, technology packs and a simple choice of decals or the even ego-extending larger alloy wheels.

The big difference between the Twingo and other City Cars is the Twingo’s rear wheel drive layout  It has a compact 3,595mm body length  with a stubby short nose bonnet, relatively high roof, wide rear haunches (reminiscent of the Renault 5 Turbo) and deep glass tailgate. This makes the Twingo easily identifiable from other City Cars so its uniqueness should have some appeal although they are still a scarce sight on UK roads. Having a rear positioned engine allows maximum interior space for passengers. Although the boot area, positioned above the engine, suffers from minimal space and on my initial test drive and the subsequent longer driving spell, it suffered from heat ingress into the load area, not good for perishable shopping goods or the family dog. The boot holds between 188 and 219-litres depending on how the back seats are set and up to 980-litres of maximum load space with them folded. 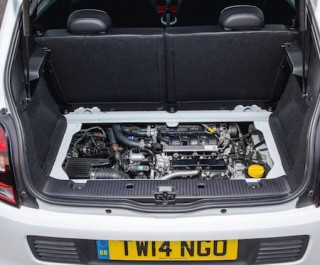 Unlike previous other rear engine small cars there is no extra load carrying space at the front where the engine compartment usually is but there is plenty of oddment space inside.

At the front is a sliding plastic bonnet lid and underneath is given over to the location of fluid filling points, the radiator and the intercooler for turbocharged model. I’m not so convinced that the rear engine layout is quite the breakthrough it seems.

Being located under the boot floor does not give easy access to check the engine oil for instance.

The Twingo is only available with a five-door body but the hidden rear door handles give the impression it has a three-door design.  A significant plus feature is the Twingo’s tight turning circle. With no restrictive drive shafts at the front the turning circle is that of a London Black Cab which will appeal to city drivers.

Another part of the Twingo’s appeal  will be the low taxes with the 70hp unit and 90hp both with Stop & Start producing 95 and 99g/km of CO2 emissions respectively while the entry level 70hp model without the system pushing out 105gkm.  Insurance costs are low as well with the lower powered engine being rated Group 3 and the higher powered model at

At the initial Media launch in September Renault UK expected 85% of customers to choose the 70hp engine and the Dynamique specification would be the most popular so the best selling Twingo with Stop & Start will cost £10,995. Virtually all UK sales will go to retail customers. In truth the much better engine choice is the significantly more responsive 90hp unit. Both engine options are three cylinder petrol units which emit the usual throaty noise and slight vibration.

I prefer the more powerful 90hp unit, it is more responsive with 44Nm more torque at 135Nm from 2,500rpm and so it copes better day-to-day driving conditions with brisker acceleration to overtake slower traffic and more importantly it copes better with going up hills. 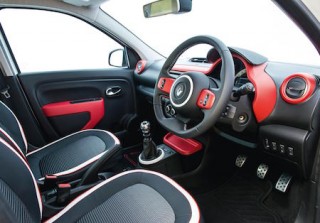 Inside the front space is adequate although I thought both seats felt a bit high in the car but there was plenty of headroom.

In all other respects the interior is a cheery environment and can be customised with the application of coloured styling trims so personalisation is easy and popular with today’s small car buyers.

Handling is relatively neutral, some understeer moving to some oversteer with the weight balance being 45/55% front to rear.  On small front wheel drive cars the weight balance is normally around 70/30% front to rear which I think gives better directional stability during cornering.  Ride comfort is a big plus point thanks to the enhanced torsion beam rear system with programmed deflection, dampers and coil springs. Macpherson struts, dampers and anti-roll bar are fitted to the front.  I am hard-pushed to think of a City Car with better ride comfort. 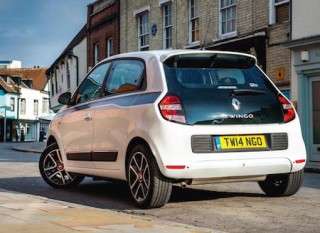 With its compact length, sharp and precise steering and compliant ride the new Twingo is a very easy car to live with and it is cheap to run.

I’m not sure its stands out from the crowd in terms of exterior styling, it doesn’t make much of a statement and for some potential owners that is a big requirement as the Fiat 500 has proved.

It is certainly an interesting alternative though, especially if the more powerful and eager 90hp turbocharged petrol engine is chosen.

For: Makes best use of rear wheel drive layout which frees up more interior space, wide range of personalisation options, low running costs, easy to drive, easy to park, comfortable ride, the turbo 90hp engine is the much better option in terms of driving response and real-life fuel economy.

Against: Not as sharply priced as some others in this class, engine heats up the load space, fiddly to check the engine oil and other fluid levels, cramped driver’s side footwell with no clutch rest for your foot.