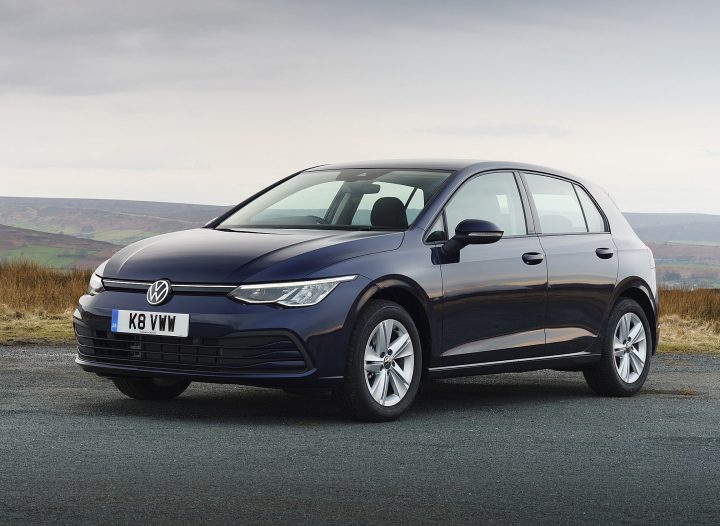 The new eighth generation Volkswagen Golf arrived in the UK at the end of March and after the lockdown period deliveries are now underway so this is our first opportunity to test drive the  latest Golf 8, writes David Miles.

The new Golf 8 model as it’s known is initially available in five door hatchback form and it has a lot to live up to as its ancestors sold more than 35-million units over 45-years.

Last year UK Golf sales were 59,000 units which put it in second place in the top ten sales chart behind the Ford Fiesta but just ahead of its main competitor – the Ford Focus.  The Golf’s other competitors are numerous but include the Vauxhall Astra, Skoda Scala, SEAT Leon, Kia Ceed, Toyota Corolla, Mazda 3 and if you dip into the so-called premium sector then include the Audi A3, BMW 1 Series and Mercedes-Benz A-Class. In addition there are numerous other SUV/Crossover models of a similar size.

But the stiffest sales challenge could come from VW’s own all-electric ID.3. due shortly with order books already open. It has an expected on-the-road price of £35,880 after the Government’s plug-in grant has been applied.  This zero benefit in-kind tax 5-door family sized hatchback can be driven up to 260-miles on a full charge and it has the acceleration performance of a Golf GTi. 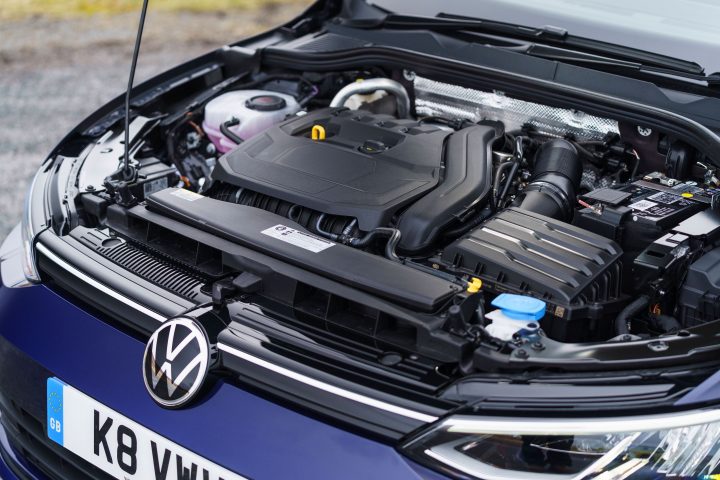 VW say Golf 8 is the most intelligent and connected generation yet and in time will offer the widest choice of drivetrains with mild hybrid, plug-in hybrid plus the usual petrol and diesel engine options. Prices across the initial 14 model hatchback line-up range from £23,300 up to £29,905.

The best selling Golf 8 model is expected to be the 1.5 TSI 130hp petrol with manual gearbox and Life spec level priced at £23,900 and that was my test car version. It is expected that 35% of Golf 8 sales will be to retail customers and 65% to fleet operators, roughly the same as the outgoing Golf models. 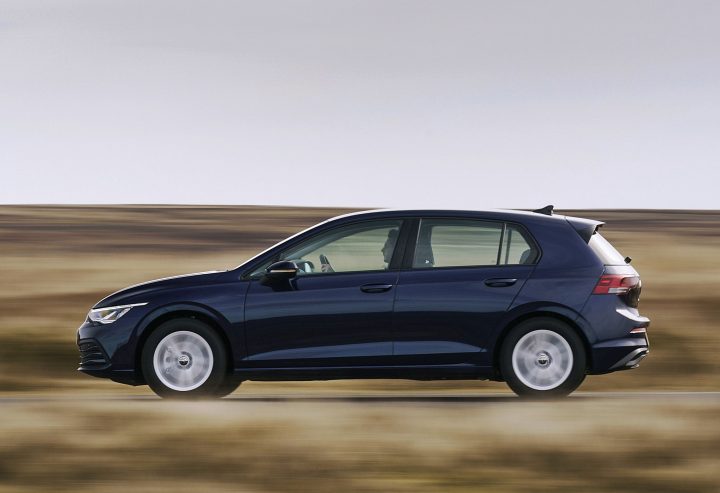 From the outside the new Golf doesn’t look that different from the outgoing version with the most noticeable change being the new aerodynamic front grille but you could argue why change something that isn’t broken. The Golf’s styling has always crossed social boundaries selling to premium and non-premium brand customers.

It is the interior that sets this generation Golf apart from all previous others, not its dimensions but its appearance. 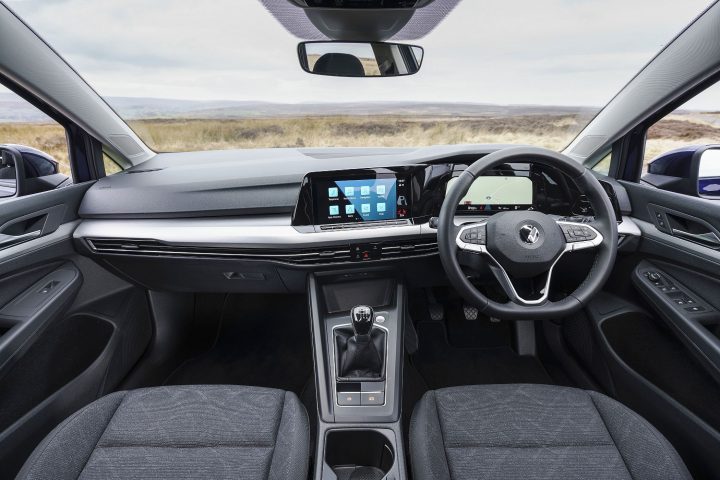 Initially it looks sparse with what is called its new digital ‘Innovision’ cockpit which is fitted as standard across all models in the UK.

A 10-inch Active Info Display in what would be the instrument console is complemented by a 10-inch central display touchscreen for the infotainment system.

Compared with previous generation Golf models most of the interior buttons and switchgear have been removed, replaced with sliders and touch panels for all key functions. Many of these functions can also be controlled with a new but optional voice recognition system. For example, by telling the car that your hands are cold the heated steering wheel will automatically warm up.

Other items of note are that the Golf is the only model in its class to provide LED lighting as standard. The advanced IQ.Light LED-matrix headlights, first introduced on the Touareg, are optionally available on the Golf for the first time. Several other features, usually reserved for more expensive and larger models are now available on the Golf 8. These include a head-up display, adjustable ambient lighting with 32 colour options and the ability to use a mobile phone as the vehicle’s key. 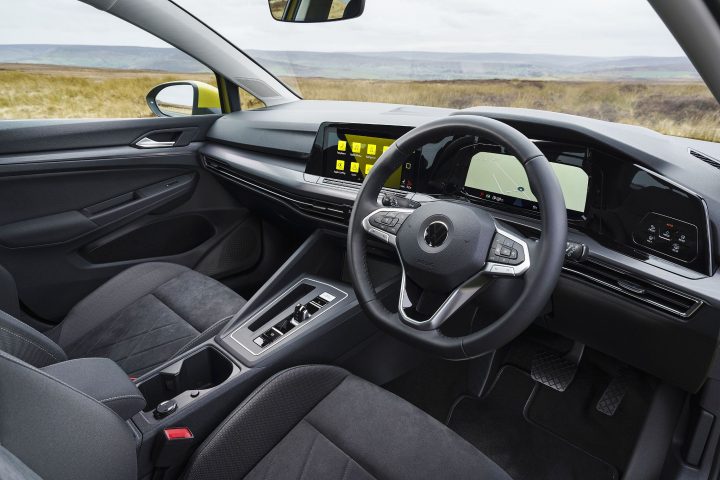 There can be Car2X car-to-car wireless communication features for the first time on a Volkswagen depending on the spec/option levels. This enables the car to exchange information between other vehicles and the traffic infrastructure and uses an EU-standard network valid for all manufacturers.

So vehicles from different brands can exchange data about hazards on the road ahead, for example broken-down vehicles, traffic jams or even approaching emergency services.

VW say the Golf 8 is the most important mainstream car yet to have Car2X technology fitted as standard across the range. Travel Assist, which debuted on the up-rated Passat, can also feature on the new Golf allowing Level 2 driving automation at speeds up to 130 mph, when/where permissible.

As for the mainstream specification, depending on the engine chosen, for the initial Golf 8 models the best selling entry-level Life  includes Lane Assist, Front Assist with City Emergency Braking System and predictive pedestrian monitoring, Car2X local communication with other vehicles and the traffic infrastructure,  Innovision Cockpit which incorporates Digital Cockpit Pro with 10-inch screen in the car’s instrument binnacle and the Discover Navigation infotainment system with 10-inch colour touchscreen, We Connect and We Connect Plus mobile online services and functions, LED headlights, LED reading lamps and two USB-C ports in the glove compartment are included. This spec level has comfortable riding 16-inch alloy wheels with deep walled tyres,

Under the bonnet of my test car was the expected best selling petrol engine. It is the 1.5 TSI EVO 130hp, 4-cylinder turbocharged direct injection unit with a particulate filter exhaust system. Like its more powerful 150hp sibling it has Active Cylinder Technology which is automatic deactivation of two cylinders under certain light load conditions.  With its variable rate turbocharger geometry it provides 130hp between 5,000 and 6,000rpm, while the wide torque curve sees the maximum figure of 200Nm available between 1,400 and 4,000rpm. With this engine the Golf’s top speed is 133mph, and the 0-62 mph time is 9.2 seconds. Economy on the combined WLTP cycle ranges between 49.6 and 52.6 mpg with CO2 emissions between 122-130 g/km depending on optional equipment fitted. This engine is available exclusively with a 6-speed manual gearbox.

The spec of my test car gave an official CO2 figure of 122g/km so First Year VED road tax costs £175 followed by the £150 Standard rate and the Benefit-in-Kind company car tax is 27%.  The official Combined Cycle fuel economy figure for the test model was 52.6mpg and my week of test driving returned 54.4mpg covering motorway, local town and winding Cotswold road driving. For equally good financial measure the insurance group is 17E. I do feel the 3-year/60,000-mile warranty in these competitive times to be ungenerous. 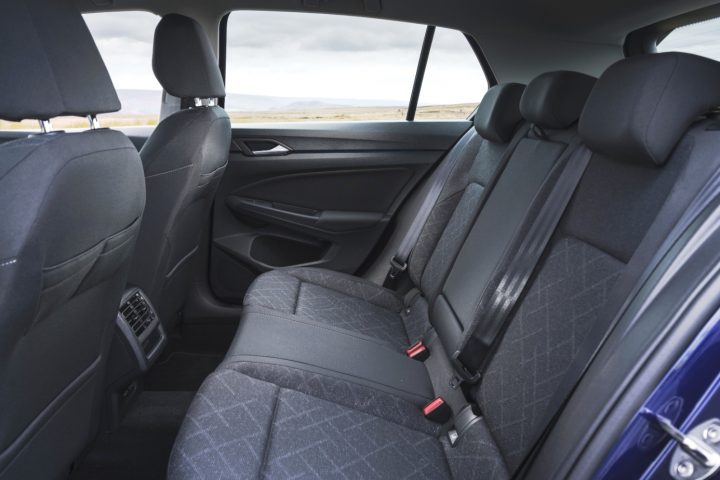 As I’ve already said the new Golf 8 looks little different on the outside and it still uses the Volkswagen Group’s MQB platform so we know its driving and handling credentials are praiseworthy. It’s agile, nimble with sharp steering responses and with a comfortable ride due partly to the deep walled tyres on 16-inch alloy wheels.

However those spongy side-walls of the tyres failed to eliminate the bumps and lumps of poorly maintained road surfaces. There could be improvements to the damper rates for UK roads if it’s going to match the Ford Focus platform’s class-leading ride comfort refinement.

Inside the fascia and controls design is a completely different picture from Golfs past. It’s clinically modern.  All controls are touch sensitive buttons or other operations made annoyingly via the touchscreen.  Having proper controls I find are just easier and safer to use and give the dashboard a bit of character which the new Golf’s dashboard lacks.

All other aspects of the new Golf’s interior are virtually carry-over from the last generation, good supportive seats, nice driving position, reasonable rear seat legroom with an average sized 381-litre boot and folding rear seat backs.  All in all it’s a neat interior package and an evolution of Golf’s past, not a revolution. 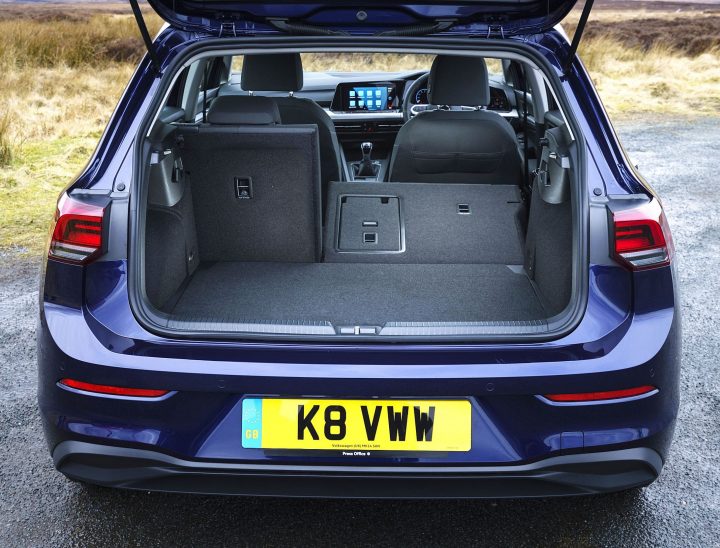 As for engine performance  the 1.5-litre, 4-cylinder TSI 130hp petrol engine has cylinder deactivation where four cylinder use can become fuel saving two-cylinder use on light throttle loads or on the engine overrun.  The operation between two and four cylinders was seamless and in conjunction with other engine design features was very impressive for its fuel economy and general refinement.

Yes it will growl at you under heavy acceleration at high revs but it’s characterful shall we say.  It has a top speed of an impressive – on paper- 133mph so the legal 70mph cruising speed is easily maintained without effort. But it’s the zero to 62mph acceleration time of a lengthy 9.2-seconds that illustrates this is not a speedy unit. That is offset though by the wide torque band with 200Nm being available from a low down 1,400rpm right through to 4,000rpm so the low to upper medium engine speed response is very impressive  as is the 50mpg+ fuel economy. 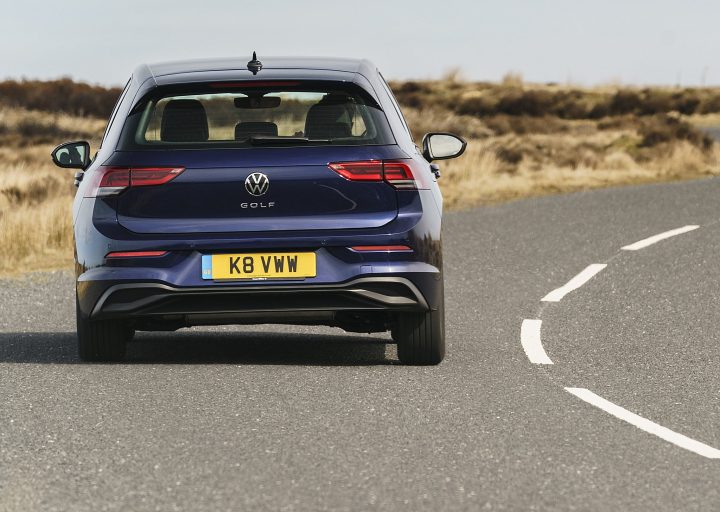 Matched with a 6-speed manual gearbox I can see why this powertrain and spec relative to the price, will make it the most popular version in the new Golf 8 range.

Judging by its latest sales performance there seems to be no shortage of would-be Golf enthusiasts.

Against: Apart from the new clinical dashboard design there is no great change over the last generation Golf, more evolution than revolution and if it isn’t broke don’t’ fix it attitude, ungenerous warranty.