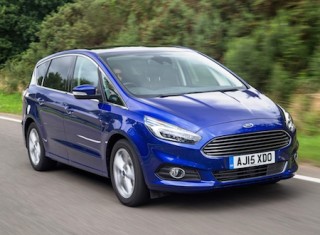 A decade after it was launched and with over 82,000 British sales, the Ford S-Max has been revised, with mixed results.


The all-new models from £24,545, are even more sporting in their looks and handling, but don’t have the same composed ride as its predecessor.

With the underpinnings of the new Mondeo and the visual front looks of all the latest ‘One Ford’ models plus a better fascia with more logical controls and a new 8.0-inch touchscreen plus loads of driver support and safety kit the improvements are logical.

On the down-side the sports ride is less compliant and comfortable. In this important area it is no longer the class-leader although for such a large vehicle it remains agile for its size.

At 4,796mm in length there is seating for seven accommodated in three rows of seats and these offers up to 32 seating and load carrying combinations. 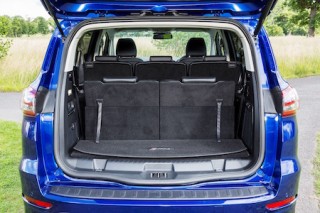 With the middle and third row of seats folded, which they do easily to provide a completely flat load floor, there are 2,020-litres of cargo capacity. Even with five seats in place using the first and second rows for passengers there is still a generous 965-litres but with all seven seats in three rows being used load space is a skimpy and not practical 285-litres.  Unlike the Grand C-Max the S-Max has conventional hinged doors but the middle row of seats slide and tilt forward to gain relatively easy access to the third row seating.

The spec level options are Zetec appealing to 30% of UK buyers, the best selling Titanium at 40% and Titanium Sport at 30%. Depending on the equipment level chosen there is a wide choice of engine options but 97% of UK customers are expected to choose a diesel unit.

There is also a 4×4 option with the 180hp TDCI engine with a manual gearbox for the Titanium level and Powershift auto for the Titanium Sport level priced at a range topping £32,945.  The AWD versions will only appeal to 5% of UK buyers say Ford.

They also predict that 29% of customers will choose an automatic transmission and there will be a 50/50 split between retail and fleet/business sales. 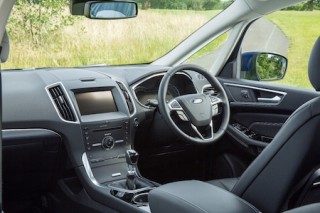 The expected most popular model will be the 150hp Titanium 2.0-litre TDCI with a six-speed manual gearbox. This version is priced at £27,695. However for lower mileage retail customers the new 1.5-litre EcoBoost 160hp turbo petrol engine with the same Titanium spec is £1,420 cheaper to buy and is marginally faster for acceleration. The downside for petrol over diesel power is the diesel is better for fuel economy at 56.4mpg in the Combined Cycle rather than the 43.5mpg for the petrol.

To get a feel of what the new Ford S-Max offers I tried the best selling 2.0-litre TDCI turbodiesel 150hp Titanium Stop/Start version.  This upgraded unit pushes out 350Nm of torque but there is evidence of a lack of low-down grunt below 2,000rpm. The Combined Cycle fuel consumption is 56.4mpg and my rural test driving returned 42.4mpg.

The CO2 emissions are much improved, now down to 129g/km so VED road tax is £0 First year rate then £110 thereafter.  Company car drivers will pay 23% Benefit-in-Kind tax.  The insurance group rating is 20E for this model.

With a larger sport MPV it is not all about space, you could buy a Ford Galaxy to get that or a cheaper seven seat Grand C-Max. The S-Max is more about its sports performance to go with its racier styling.

The 2.0-litre 150hp turbo engine just about does give enough zip to make it pleasing and rewarding to drive. 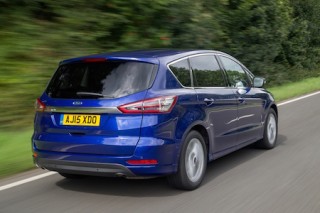 The platform from the latest Mondeo family provides safe and secure handling, a relatively roll-free ride but the suspension is definitely firmer and not helped with the optional 18-inch alloy wheels fitted on my test car. Stick with the standard 17-inch ones and save yourself £400.

The electric power steering gives less feedback and the ‘glide’ over undulating roads has gone so the S-Max always felt that bit unsettled over country A/B roads but improved on motorways providing the surface was smooth.

Overall the interior is roomy, accommodating but it lacks ‘sparkle’ and appeal – probably best described as efficient but drab so the new S-Max is as good as the previous one but shouldn’t we expect it to be better?

For: As good as it was before but not better, easy to live with, sporty good looks, well equipped.