So what is the new Kia XCeed?asks David Miles.

Well it’s a Crossover styled member of the Ceed C-segment family that is also made up of the Ceed five door hatchback, Ceed Sportswagon estate and the ProCeed Shooting brake models.

The Ceed family is Kia’s third best selling model range after the Kia Sportage mid-sized SUV and the Picanto Picanto city car. All new Kia passenger cars are covered by a 7-year/100,000-mile warranty which is fully transferable between subsequent owners during that period and has proven to be a very popular reason-to-buy for customers.

The XCeed, like other Ceed models, is designed, engineered and built in Europe. It is a family hatchback with a steeply forward raked tailgate combined with Crossover/SUV styling, a raised 42mm ride height but it is only a front wheel drive model with no 4WD options.

Originally launched in the final months of last year, the now revised 2020 line up has been extended to a 15 variant range from the original eight model offerings. The extension of the line-up is mainly because of the addition of PHEV plug-in-hybrid versions and mild-hybrid models are shortly arriving.

On-the-road prices start from £20,840 and run up to £35,265 for the top spec PHEV model. The trim and equipment levels are Grade ‘2’, Grade ‘3’ and ‘First Edition’ but their availability is dependent on the engine chosen. 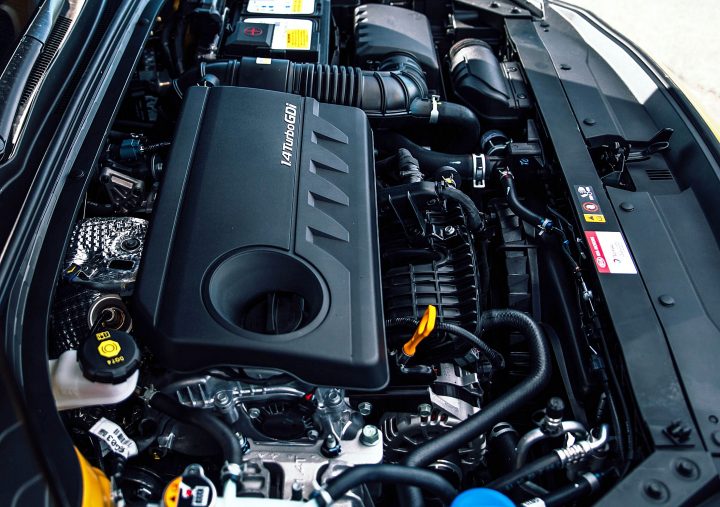 Kia very recently added a PHEV 138bhp powertrain to the line-up which uses a 1.6-litre GDi normally aspirated petrol engine with an 8.9kWh electric motor, lithium-ion battery pack and a 6-speed auto gearbox.  The CO2 emissions are 32 to 38g/km depending on the spec level, VED First Year road tax is £0 and BiK just 12%. However you will pay over £5k more for the PHEV auto model than a comparable spec level 1.4 T-GDi auto version.

The ride height is raised by approximately 42mm, depending on the wheel size. The only body panels carried over from the five door hatchback are the front doors.

It’s most noticeable styling change is the steeply-angled fastback tailgate and the spoiler which extends from the roof’s trailing edge which sits 60mm higher than the hatch version.

To the side to give it that SUV/Crossover look are black plastic wheelarch and side sill protection strips.  At the front is a more prominent version of the familiar Kia family face with the XCeed having a bolder grille, larger lower air intake, new shape headlights with the Ceeds signature ‘ice-cube’ LED lights.

These are topped by slim indicators lights that flow back over the wheelarches and it’s the same at the rear with the taillights and slim indicator LED spearing towards the rear shoulders of the vehicle. There are sculptured styling lines running across the tailgate giving a wider and more pronounced appearance and the sculptured panels continue along the sides as well. Front and rear skid plates complete the Crossover/SUV look which is mostly cosmetic. 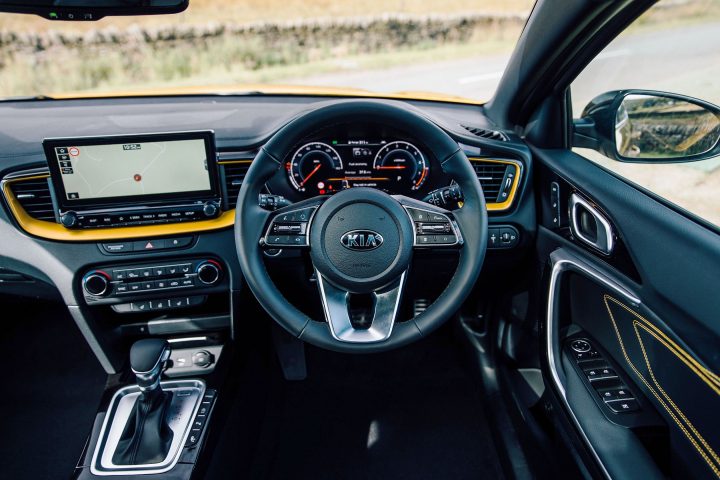 Inside it’s very much the same as other Ceed family members with a sculptured fascia and centre console all aimed at making it a driver focussed cabin. There is ample use of seemingly high quality soft touch trim materials, all well put together and the layout is simple and easy to live with.

There is an 8.0-inch or 10.25-inch ‘floating’ touchscreen, depending on the spec level, mounted high up on the dashboard. 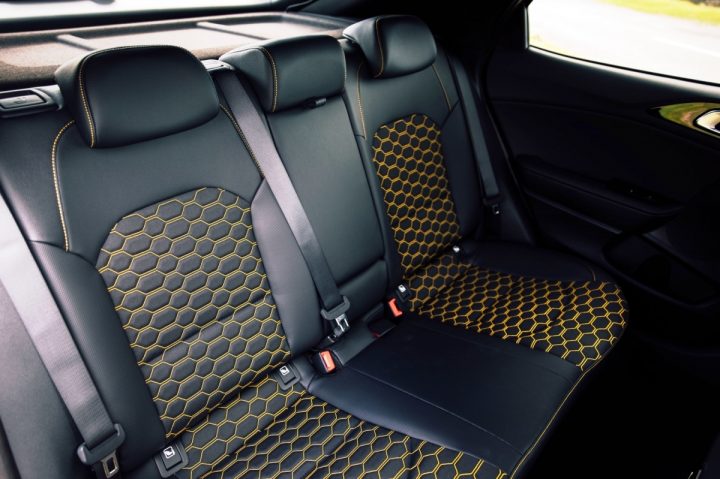 In the rear the longish wheelbase gives ample rear seat legroom for teenagers and potentially adults and the rear seat backs fold to extend the boot from 426 to 1,378-litres.  The interior design is typical Kia, well thought out, practical, of good quality and backed by its 7-year/100,000-mile warranty, thoroughly serviceable.

My only real gripe with the first new XCeed model I tested soon after its introduction was the lack of an integrated sat-nav with the Grade ‘2’ specification. It was such a waste of a smart and easy to see and use touchscreen, far safer and user friendly than a fiddly mobile phone system. You have to order a Grade ‘3’ or ‘First Edition’ spec levels to get an integrated sat-nav system which uses the 10.25-inch display. Thankfully this time around I was elevated to test driving an XCeed ‘First Edition’ model with its harsh on the eyes bright Quantum Yellow paintwork.   It was powered by a 1.4 T-GDi turbo petrol engine coupled with the 7-speed DCT dual clutch auto gearbox and priced at £29,525. Now this makes it expensive as its £4k more than the same powered high spec level Ceed five door hatchbacks and only a £1k less than a more powerful high spec 1.6 T-GDi auto Sportage proper SUV.

The Grade 3 level has numerous additions but larger 18-inch alloy wheels are most noticeable as is the uprated 10.25-inch touchscreen with TomTom live sat-nav, heated front seats, Drive Mode selector and so on. 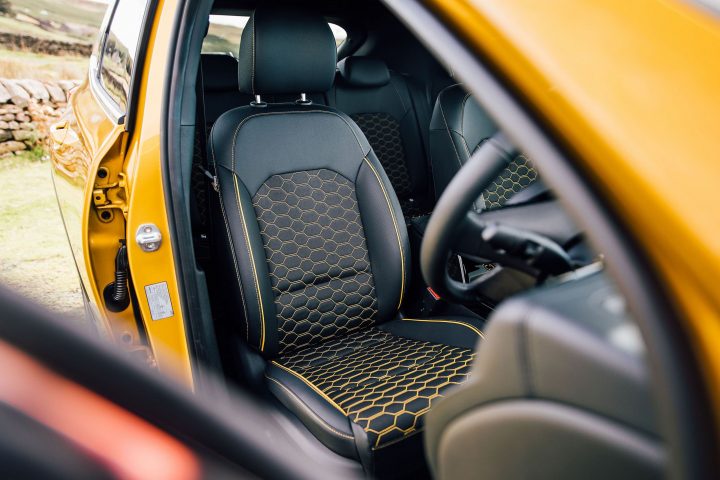 Expensive the ‘First Edition’ models might be but you do get loads of equipment and you will be noticed thanks to the yellow bodywork colour.

Under the bonnet was the 1.4-litre T-GDi petrol engine as opposed to the 1.0-litre 118bhp unit I tried before. That 3-cylinder engine was mostly fine but it only comes with a manual gearbox and I found I needed to keep the engine revs in the optimum powerband otherwise lost revs meant plenty of gearchanging to restore reasonable momentum.

The larger 1.4-litre unit has 4-cylinders and produces 138bhp with substantially more torque at 242Nm from 1,500 to 3,200rpm which is a much wider powerband.  Correspondingly the performance was better, more responsive, it had to work less hard so it’s quieter and matched with the 7-speed twin-clutch auto gearbox proved to be a nice partnership. 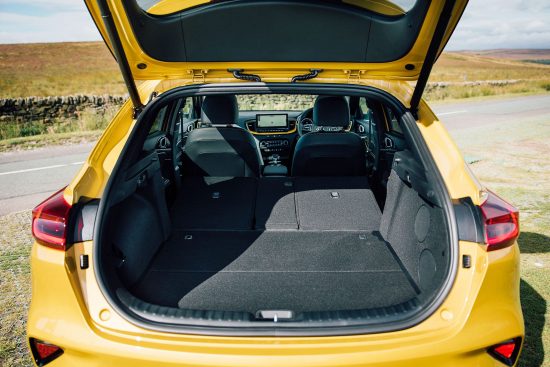 That was 1.5-seconds faster than the 1.0-litre unit which doesn’t sound much but in real-life it felt much better when coupled with more responsiveness and the slick auto gearbox option.

The WLTP Combined Cycle fuel economy figure is 40.4mph and on during my week of driving with long and short runs the figure was almost that at 39.8mpg, about 4.5mpg less than I achieved with the 1.0-litre manual version. Unfortunately the CO2 emissions are high at 159g/km so WLTP rated VED First Year road tax costs £540 and the Standard rate is £150.  Company car drivers will pay a high 34% BiK tax. Insurance is Group 18A.

As before this XCeed had no major issues to fault it apart from the high price and tax costs but it also had some very good features like the warranty and the comprehensive spec. I still think the Crossover/SUV styling is too contrived and nothing to get excited about, it’s a hatchback with a sloping rear tailgate and bodywork protection strips around the wheelarches and sills. The ride is compliant although impacts from potholes are too obvious inside the cabin and on poorer road surfaces the rear end of the car tended to fidget about with the wheels drawn to depressed lines in the tarmac caused by heavy traffic. The rear and rear quarter visibility is limited as well due to the rear end design – a case of fashion over function. 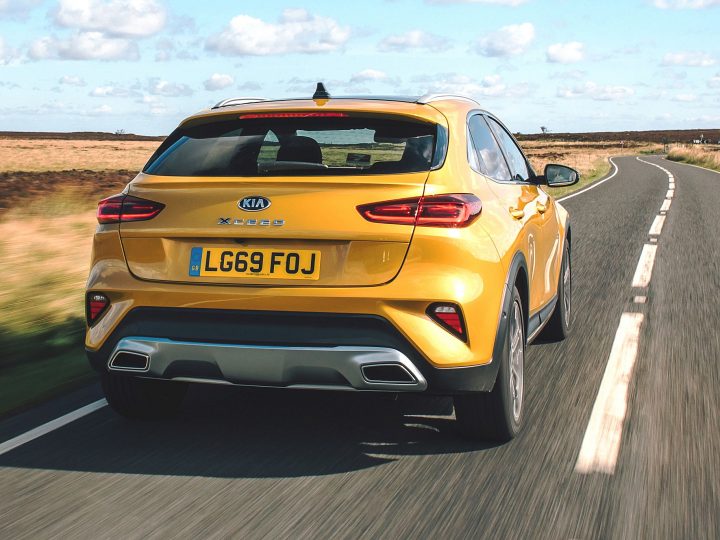 So, to sum up, the Kia XCeed is good in parts, average in other areas and I’m not sure it really justifies its higher price over a high spec 1.4 T GDi Ceed Hatchback which is not only cheaper but has a more practical load area space with much better rear visibility.