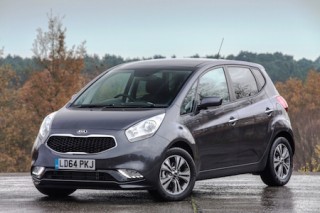 Kia is on target for another record year of sales in the UK in 2015.

For the first six months of this year their new car sales have reached a total of 42,248 units, an increase over last year of 3.5%. Their goal is to exceed 80,000 sales this year, around 3,000 units more than last year’s all-time record.

One of those Kia model ranges finding approval from UK customers is the rejuvenated 2015 model year Venga, a range of compact MPVs or more precisely a higher roofed supermini sized five door hatchback with clever fold-down rear seating.  Kia expects to sell around 7,000 Vengas in the UK this year, slightly over half of them to retail customers, the remainder to fleet, Motability and business users.

Prices range from £11,995 to £18,570 and these 2015 models are between £200 and £400 more expensive than the 2014 versions. The minimal price increases reflect the styling changes and the addition of extra specification plus the introduction of a new Venga 4 top of the range version. Mainstream specification levels are a simple 1, 1 Air, 2, 3 and now 4 plus Kia has just added a new limited edition SR7 level with added spec which sits between 1 Air and 2 grades.

Depending on the level of specification chosen the Venga line-up has the option of 1.4-litre 89bhp petrol, 1.4 CRDi 89bhp turbodiesel, 1.6-litre 123bhp petrol and 1.6-litre CRDi 114bhp turbodiesel engines.  The FR grade is only available with the 1.4-litre petrol and diesel engines. A five-speed automatic gearbox option for an extra £1,100 is available with the 1.6-litre 123bhp petrol engine. Manual versions have five or six speed gearboxes depending on the engine chosen.  Those all important CO2 levels range from 117g/km  to 154g/km meaning VED road tax is £0 at best and £180 at worst, not the most competitive in this sector where the Honda Jazz, Ford B-Max, Nissan Note, Skoda Roomster and Citroen C3 are most popular.

So who is a typical Venga customer?  They range from young couples or singles with an active lifestyle who need to carry sporting/leisure equipment in their car, or it is bought by young couples with a growing family, perhaps it suits business people where its load space can be used for carrying goods/tools during the week and then the family at weekends or perhaps, and most likely, older empty-nesters now getting on with their own active lives in a leisurely way.  All customers, young to old, appreciate Kia’s 7-year, 100,000-mile warranty on their cars.

The latest Venga has received a styling refresh front and rear with very short body overhangs so there is a wheel in each corner and it looks a bit sportier than before.  There is the usual rising waistline and common in the MPV sector are the twin front A-pillars either side of a steeply raked large windscreen. It looks more of a high-roof five door hatchback than a boxy mini-MPV. There are large windows which coupled with the high-positioned seats gives really good visibility for the driver/passengers. The Venga is 4,075mm in length, long enough to be roomy, compact enough for easy parking. It is 1,765mm wide and with its elevated roof it has a lofty height of 1,600mm so headroom is very good.   Inside there is seating for four adults in comfort or five if the middle seat of the rear row is occupied by a child. 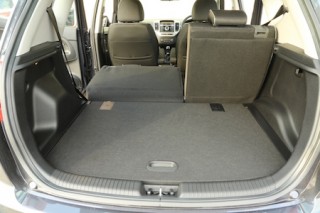 The rear seats have a 60-40 split and can slide fore and aft and fold individually. They have a ‘Fold and Dive’ function which creates a completely flat deck to the rear load area.  Thankfully the Kia designers have seen the light and the rear seats fold without the need to adjust or remove the rear head restraints.

With the rear seats in use the load area offers 440-litres of cargo space, the rear load floor can be lowered to increase this to 570-litres but with the rear seats folded the cargo capacity goes up to 1,253-litres with a load carrying length of 1,552mm.  If size matters the Venga might look compact on the outside but inside it impressively large, easy to live with but in reality is more functional than fun.

In other ways the interior of the Venga is pretty standard MPV design with a deep fascia, supportive seats, lots of storage spaces, cloth upholstery and all seemingly well put together and durable.

Of the now six trim grades available which includes the new FR level, most popular is level 2 with UK customers and interestingly specifically with the 1.6-litre, 123bhp petrol engine which comes only with automatic transmission. This best selling choice probably gives us a real-life clue as to the average age of UK Venga owners who cover less miles a year, driveability is more important than fuel economy. This model costs £15,810 but CO2 emissions are high at 154g/km so road tax is £180. 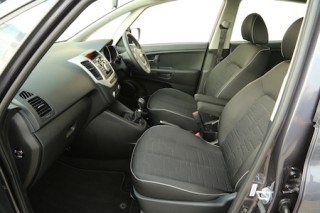 In addition to the added spec there seems to be a £300 saving by choosing an FR model over the most popular grade 2 Venga.

The downside is that the FR versions can only be ordered with either 1.4 petrol or 1.4 turbodiesel engines both pushing out a very modest 89bhp.  The petrol engines come with a 5-speed manual gearbox and Intelligent Stop and Go with CO2 emissions of 130g/km.  The diesel has a 6-speed manual gearbox and CO2 output of 119g/km. The downside for the diesel FR model is that it costs  £14,895, no bad price  on the face of it, BUT the  Venga 1.4 petrol FR is £1,300 cheaper to buy although a bit more expensive to run.

The Venga FR with the 1.4-litre 89bhp turbodiesel model I tried has just 220Nm of torque delivered from 1,750rpm and has a 6-speed manual gearbox  with top gear very much geared for cruising speeds to help with fuel economy. Officially it returns 62.8mpg in the Combined Cycle but during my longer test drive period using all types of roads and motoring conditions it only returned 48.7mpg.  With CO2 emissions of 119g/km VED road tax is a frugal £0 for the First Year rate and then only £30 for Year Two onwards.

The downside of this engine was performance with the all-important zero to 60mph taking a sluggish 14.0-seconds. Not of any real importance the top speed is close to a modest 104mph.  Engine performance is probably the least impressive feature of this particular Venga model and the lack of engine response through the gears, due to its 1.4-litre capacity, was frustrating with the constant need to change down to a lower gear to pick up any acceleration and whilst driving up hills.

If used for commuting with short trips for shopping or delivering children to school, its acceptable, but loaded it became hard-work  and fuel economy suffered.

In terms of good visibility, being easy to park with a relatively comfortable ride plus flexible load or people carrying space and safe handling are its strongest attributes rather than driving enjoyment.

Against: Functional rather than fun to drive, sluggish performance, fuel economy fell along way short of the official figure.