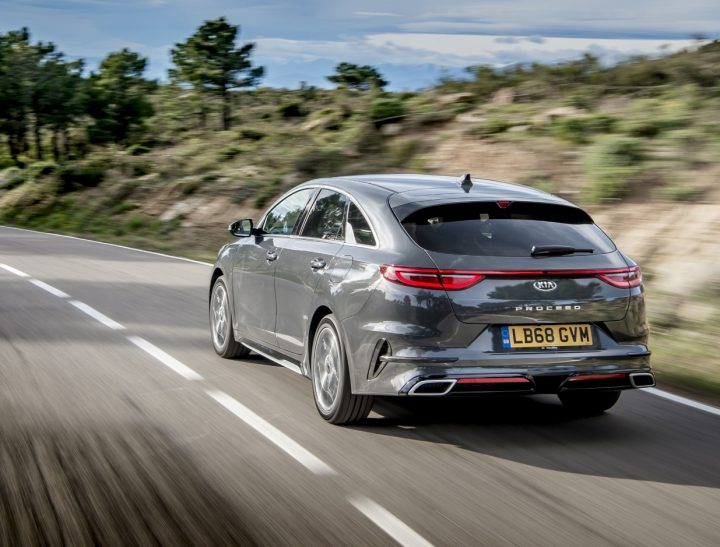 The ProCeed is what Kia calls a shooting brake and people of an older generation might remember Hillmans, Humbers, Standards and such like, with a boxy load area, sometimes made of wood, with two side hinged rear doors, tacked onto the rear of a four door saloon, writes David Miles.

As its name then suggested it was an extension of a conventional saloon which could accommodate shooting and field sports paraphernalia or most likely the food hamper and deck chairs for family picnics.

The shooting brake design evolved and later became more of a sports vehicle. The Reliant Scimitar and Volvo 1800ES being examples. In more modern times even German premium brands, such as the Mercedes CLA Shooting Brake, have produced sports styled shooting brake models as extensions to their sports saloon and coupe body styles.

Kia initially introduced the Pro_Cee’d in its previous Ceed range as a three door sporty styled hatchback.  As sales of compact three door hatchbacks have fallen off a cliff edge for this generation a restyled ProCeed name has been used for a five door sleek shooting brake to compliment the latest range of C-sector Ceed five door Hatchback and Sportswagon estate models.

So what goes around comes around again and a shooting brake is now back on the menu of car body types.  Keeping up the sporting heritage of the shooting brake name, the ProCeed is available with sporting GT-Line, GT-Line S and higher performance GT specification levels. 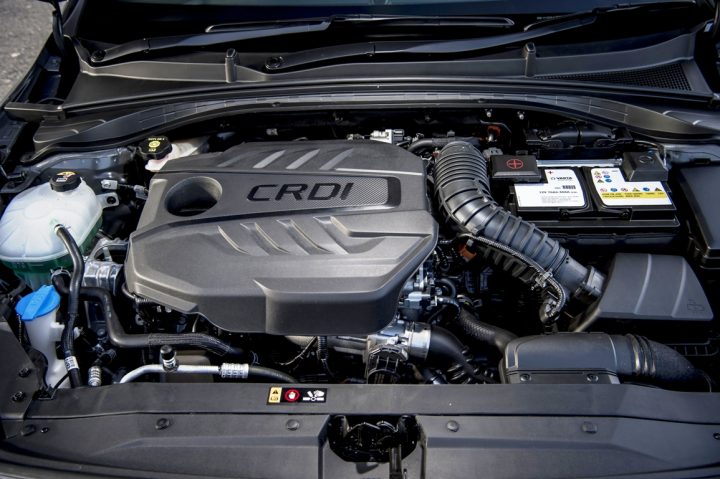 There is also GT version with the 1.6 T-GDi 201bhp petrol engine with its standard 7-speed auto transmission.

ProCeed prices range from £23,840 to £29,460. Prices for the more practical Ceed Sportswagon estate which includes a wider range of lower powered petrol/diesel engines and different spec levels start from £19,600 and go up to £28,905. Ceed Hatchbacks again with more spec levels to choose from and more engine options, have prices ranging from £18,600 to £27,735, so there is a price-premium for the ProCeed shooting brake line-up.

Explaining the reasoning behind the ProCeed’s design and its potential customer appeal, Kia said,  “The ProCeed takes the Ceed model family in a bold new direction. Where the Ceed Sportswagon majors on practicality, the ProCeed provides couples or young families with the space and versatility of a wagon, combined with an emotive swept-back design. Where focusing on one of these normally compromises the other the ProCeed is the first car in the mainstream segment to combine both.

The Kia ProCeed was designed at Kia’s European design centre in Frankfurt, Germany and is built alongside other Ceed family models at their Zilina plant in Slovakia.

My ProCeed test version was the 1.6 CRDi 134bhp turbodiesel manual with the base GT-Line specification priced at £24,690 but in fact there was nothing ‘base’ about the specification. It seemed to me to have all the specification anybody might realistically need and of course like all other Kia new cars comes with their desirable and transferrable 7-years/100,000-mile warranty.

Whilst Kia calls the ProCeed a shooting brake in fact to my eyes it’s more like a five door Coupe. It’s lower and longer than both the Ceed five-door Hatchback and Sportswagon and with its sleek coupe silhouette it has a striking visual presence, but not the versatility of an estate. The boot volume is 594-litres with the rear seat backs in position, slightly smaller than the 625-litres of the Ceed Sportswagon estate but more than the 380-litres of the Ceed Hatchback. 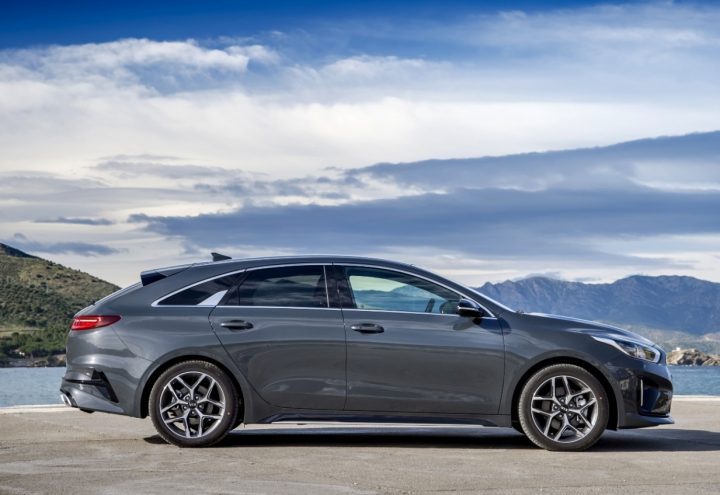 The downside of the ProCeed’s styling is the steeply forward sloping tailgate window which restricts the load carrying height at the very rear of the boot space. Another downside is the window in the tailgate is positioned low down and that significantly restricts rear vision.

I found I could only see the car closely following me and not further along the road behind my car. Interestingly the ProCeed name is spelled out in capitals across the centre of the tailgate. The typeface and letter spacing I noted to be very similar to those used by Porsche.

Although quite plainly it’s a Ceed, the ProCeed’s body is all-new from the A-pillars rearward and it’s noticeably lower slung, has a lower roofline which visually elongates its length and at the rear is its steeply raked forward tailgate. At 4,605mm in length the ProCeed is 5mm longer than the Sportswagon estate, it has a height of 1,422mm so its roofline is 43mm lower than the Ceed Sportswagon, ground clearance is 5mm lower but the 2,650mm wheelbase and vehicle width of 1,800mm is the same as other Ceed models. 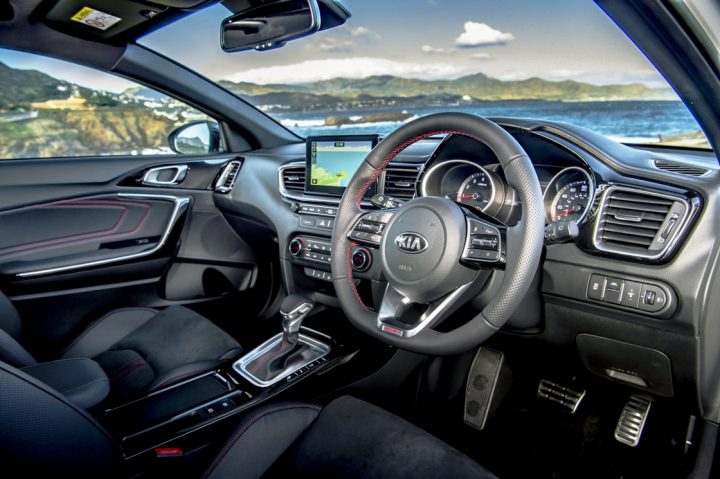 The sports seats of the ProCeed are lower in the body which offsets the potential loss of headroom.  The lower roofline also means the side windows are shallower which restricts side visibility. In addition with the all-black interior colour, it gave a claustrophobic ambience.

There is plenty of kit and specification all logically laid out with brightwork edging to dials and to switches which gave some sparkle to the interior. There is an 8.0-inch ‘floating’ touchscreen infotainment system sitting at the centre of the fascia panel with audio, heating and ventilation controls positioned below it so thankfully those do not need to be operated via the touchscreen which is just plain sensible. The dashboard is also slightly angled towards the driver for good driving ergonomics.  A big plus is the use of well fitted soft-touch surfaces used more or less throughout the interior and really puts other competitors to shame in the C-sector; VW please note. 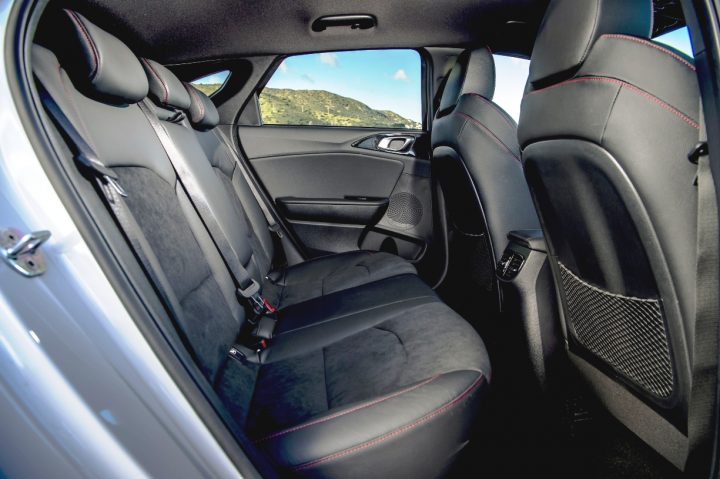 The shooting brake styling might not be to everybody’s choice but you cannot complain about even this base model’s specification and its build quality.

Engine wise, whist petrol powered models will be the most popular choices overall, I opted to try the new 1.6-litre ‘Smartstream’ CRDi direct injection turbodiesel engine, ideal for drivers who cover high mileages. The 1.6-litre diesel engine in the ProCeed is the first Smartstream diesel engine from Kia.

With a power output of 134bhp, the unit can be paired with a six-speed manual or seven-speed auto Dual-Clutch Transmission.  It produces 280Nm of torque from just 1,500rpm through to 3,000rpm with the manual transmission and 320Nm with the 7-speed auto Dual-Clutch Transmission. Designed to go beyond the stricter limits laid down by the latest Euro 6d TEMP emissions standard, the Smartstream engine uses Selective Catalytic Reduction  active control technology to reduce CO2, NOx and particulate emissions.

The 1.6 CRDi manual gearbox model I tried has an official Combined Cycle fuel economy figure of 56.5mpg thanks in part to its relatively ‘high’ 4-6thgear ratios. My week of driving easily bettered that figure for long runs by 10mg on a regular basis.

The ProCeed handled really well, a nice balance, plenty of front end cornering grip, precise steering, a  reasonably cushioned ride because it has the 17-inch wheels rather than larger ones with higher spec versions. Only poor tarmac surfaces caused the handling to become unsettled and road noise intrusion was its only other driving blemish, apart from rear end visibility.

Kia calls the ProCeed a shooting brake, but they haven’t ‘shot themselves in the foot’ with its radical design for the sector it sells in. 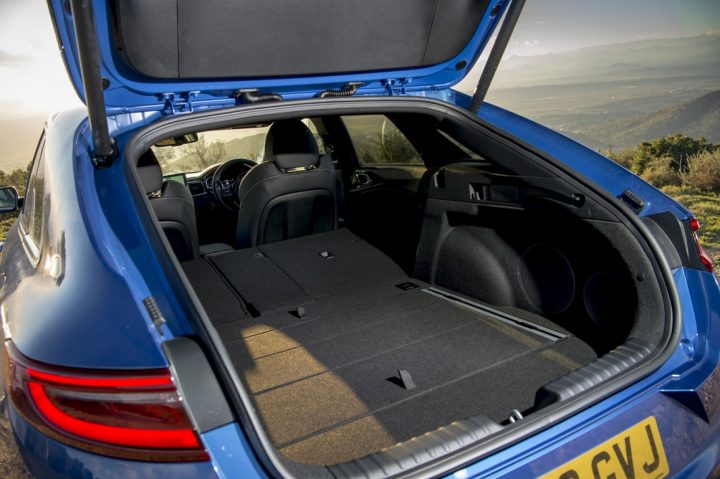 It will not be the most practical or popular member of the Ceed family because of its rear end and low roof design, but it is definitely the most distinctively styled model in the Ceed family range. Whether that is good or bad depends upon the ‘eye of the beholder’ as the saying goes.

Against: Rear end design is fashion over function, poor visibility through the tailgate window, limited load carrying height in the boot, restricted side window depth due to the low roof.