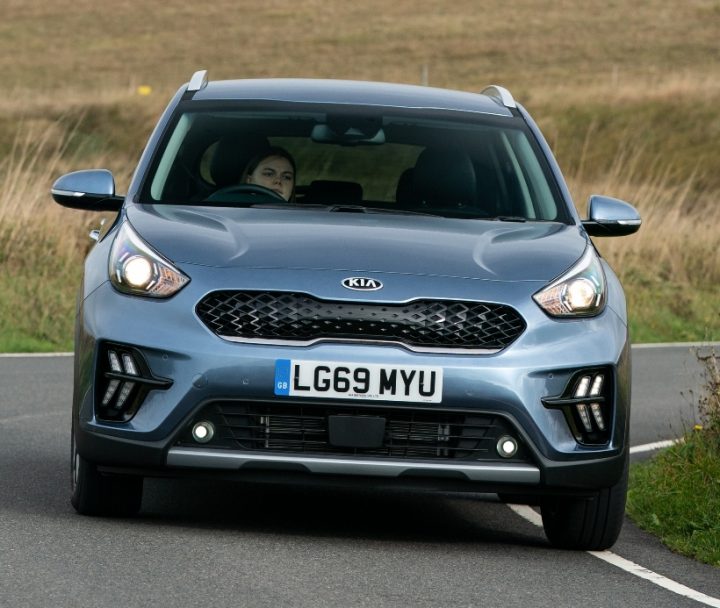 There is increasing pressure for UK MP’s to ban all sales of new petrol and diesel cars by 2030 and potentially phase out sales of hybrid models by 2035, writes David Miles.

This pressure is from the Committee on Climate Change, the Government’s independent advisory body who want the deadline shortened.

But information released by the Society of Motor Manufacturers and Traders last week show nearly half of UK motorists are not ready for the 2035 deadline with higher purchase prices of electric cars and a limited number of charging points holding buyers back.  The SMMT says it will take at least £16.7 billion to get a UK public charging network ready for a mass EV market with 507 new charging points needed every day until 2035 to drive up customer confidence.

But until whatever deadline we end up with sales in the UK of Alternatively Fuelled Vehicles which are made up of hybrids, plug-in hybrids and pure-electric cars do show increasing numbers of UK customers. For the year-to-date Hybrids are the most popular AFV with  57,649 registrations followed by BEV battery pure electric models with 44,708.sales and  PHEVs plug-in hybrids with  29,877 registrations.  To put that into perspective sales of conventional petrol powered models were still 543,376 units and diesels 162,097.

Kia has the current hybrid, plug-in hybrid and pure electric new car market covered by offering no less than three propulsion versions of their Niro compact crossover 5-door, 5-seater models that sit between their Ceed Hatchback and Sportage SUV ranges.

In August the Kia Niro family attracted 1,417 new owners to push the brand’s electrified range into the UK Top Ten for the first time at position 10. Out of the Niro family total, 533 were e-Niro battery electric variants – a best-ever sales performance for the brand’s 282-mile range zero-tailpipe emission contender. 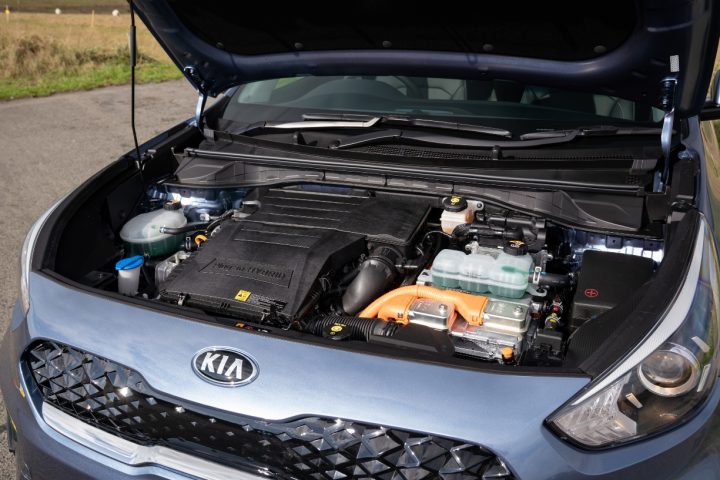 There is the Niro PHEV plug-in hybrid versions with the same engine/drivetrain with a larger 8.9kWh battery with grade 2 and 3 spec levels priced from £30,265 to £32,530.

The third model is the e-Niro all electric version with a 201bhp electric motor, a 64kWh battery, a one forward speed auto transmission and one high grade 4 spec level priced at £37,995.

Such has been the demand for  e-Niro models with their 282-miles all-electric driving range,  zero CO2 emissions, zero VED road tax and zero rate Benefit-in-Kind company car tax that orders have far outstripped supply until now.  But Kia in the UK says they have obtained increased supplies to meet the September new registration plate peak sales month.

All versions of the Niro have the mild facelifted alterations to styling and spec inside and out, nothing too noticeable just keeping them fresh in a fast growing market sector in terms of alternatively fuelled vehicles.

My test version was the Niro PHEV plug-in-hybrid with grade 2 specification priced at £30,265 which is almost £8k less than the e-Niro all-electric version but that has only one much higher specification level.  The PHEV version is however over £5k more expensive than the non plug-in basic Hybrid model with the same spec level.

The Niro PHEV with its 1.6 GDi direct injection, long stroke, non-turbo, 4-cylinder petrol engine specifically developed for hybrid use, has a total power output of 139bhp of which 104bhp comes from the engine.  The total torque output is a healthy 265Nm.   Drive to the front wheels is through a 6-speed automatic dual-clutch gearbox with manual mode, not a CVT unit, so we don’t get the usual strained vocal chords of a variable speed unit. Although classed as a crossover model there is no 4WD option. The Niro uses a new platform exclusively designed for electrified cars. 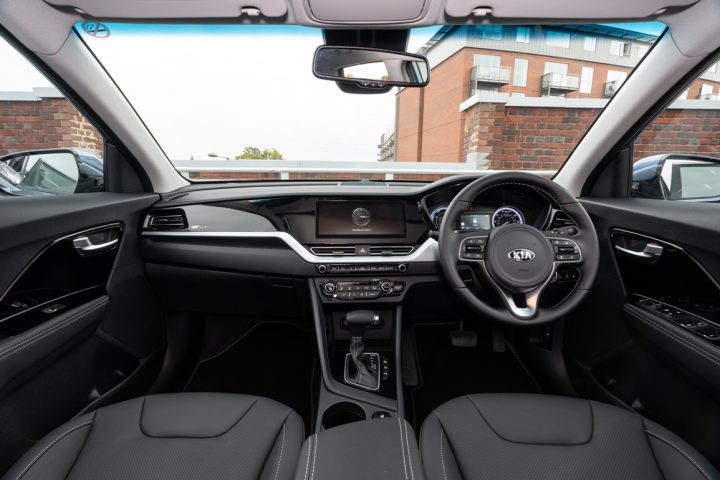 As for performance, well the top speed is a modest 107mph and the zero to 60mph acceleration time is also modest at 10.4-seconds, probably longer when fully loaded or when the battery power that drives the supporting electric motor has run out.

But it’s the fuel economy figures that are more impressive with a quoted official WLTP Combined Cycle 201.8mpg figure.  Now that looks exceedingly optimistic but in fairness if the Niro PHEV was used for short journeys using only its plug-in electric charging system no petrol would be used at all.

It is claimed to have an all-electric driving range of up to 36-miles and on my test drive time with the car it seemed to vary between 30 and 33-miles between charges.  Charging can be done using as domestic 13amp supply or other commercial charging points and takes between two and four hours depending on the electric supply.

As for overall fuel economy during my week of driving, using the PHEV auto mode system to decide what power was used when, the overall figure was 65.3mpg.  More good news though the CO2 emissions are only 31g/km so First Year VED road tax is zero cost and Benefit-in-Kind tax is rated at 10%.  Even more good news the vehicle is also covered by Kia’s highly desirable transferable 7-years/100,000-mile warranty with the first 3-years having unlimited mileage cover. 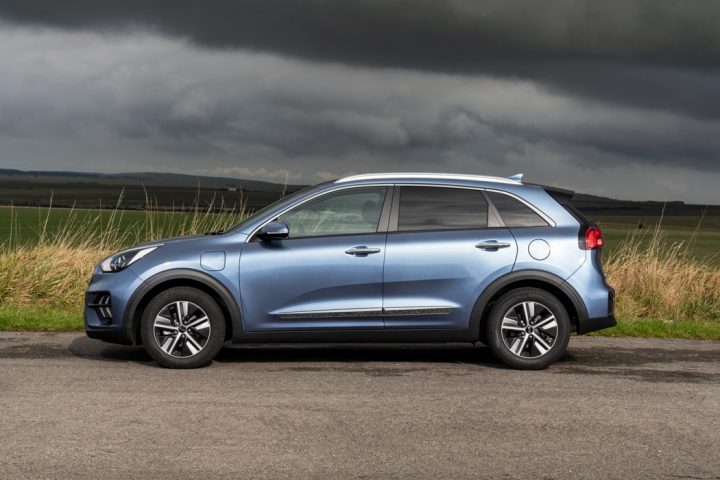 A fast-charging USB port for smartphones and other devices is included in the centre console. Front fog lights are standard as are aluminium door scuff plates and front parking sensors.

Kerb appeal is important so the Nero PHEV grade 2 despite its being the range base model has chrome coated exterior door handles and black beltline mouldings give an upmarket appearance. These are combined with body coloured and high gloss door mirrors, a matt black radiator grille as well as SUV style black side sill and wheel arch body mouldings. LED daytime running lights are included as are LED rear combination lights.

Both the front passenger and driver’s seat are height adjustable and the steering wheel features tilt and telescopic adjustment. High gloss black trim on the steering wheel, door inserts, lower console and central fascia gives a smart appearance with satin finish interior door handles. To aid practicality when carrying awkward loads the rear seats fold down in a 60:40 fashion. 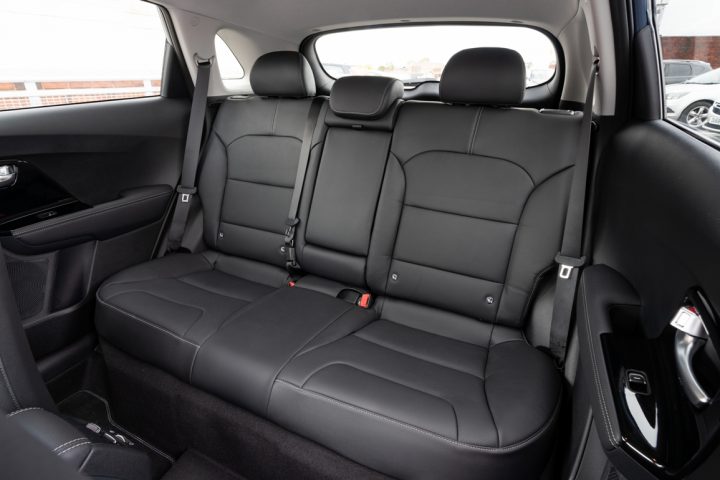 Generally inside it looks and feels a good quality product with soft-touch areas of trim and the plastics only get harder to the touch lower down in the cabin. The seating positions are excellent, much like an SUV in fact although it’s classed as a crossover – in other words an elevated family hatchback but with much more interior space, especially width.

No wonder I see lots of Cotswold mums with Niros being used as the family bus having seemingly taken over from the Nissan Qashqai and the new Ford Puma will be on their shopping list as well..

One difference with the Niro PHEV version is that luggage capacity has been slightly reduced from 373 to 324-litres with all five seats occupied because of the enlarged battery pack, although this has been partially offset by reducing the petrol tank capacity from 45 to 43-litres.

The boot expands to 1,322-litres – down from the 1,371-litres of the Niro self charging hybrid – with the 60:40 split rear seats folded. The luggage area features an undertray for storing the recharging cables.

Does it measure up visually and for kerb appeal, important factors in the SUV/crossover ever-growing sales sector? Niro has a wide stance that emphasises the car’s stability as it has a low centre of gravity despite its elevated ride height.  Up front is the usual Kia grille, I’m not a fan – it looks like pursed lips, a long bonnet, short overhangs, elevated headlights and a rising shoulder line are other typical Kia SUV distinguishing features. The body tapers towards the rear where bold wheel arches, a squared-off rear bumper and the high-mounted C-shaped tail light clusters emphasise the crossover stance.  A long wheelbase adds to the Niro’s visual kerb appeal presence.

There is ample space for five people and the Kia Niro is all about family-friendly packaging where it excels. It offers different power sources, lots of driving safety and support systems even in lower spec models, it’s  very family friendly space wise and it looks good as well as it has that must have SUV/crossover styling. 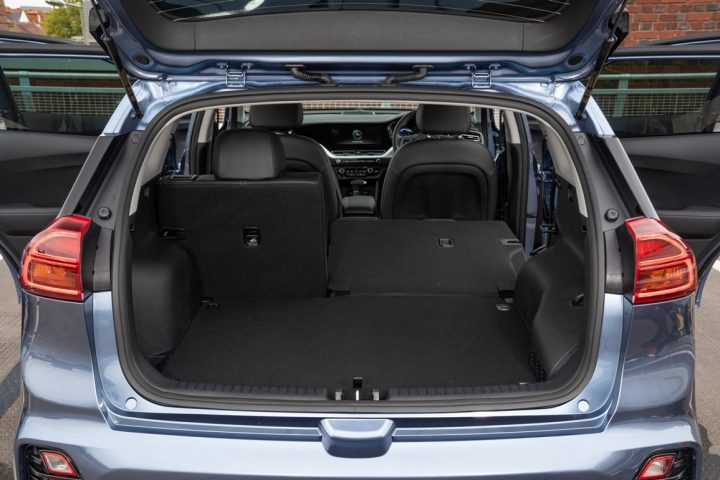 The PHEV technology as usual works most efficiently for short journeys and when the battery is charged very regularly. It works best for short distance commuting for work or shopping providing owners comply with the technology and charge it up.

Stray away from that routine and on longer journeys the battery will run out of power despite its self-charging nature by regenerative braking energy capture.

Once the electric power is reduced then the vehicle is more reliant on the petrol engine and the fuel economy decreases. It doesn’t take long at motorway cruising speeds for the battery to empty and petrol power to become the main propulsion source.   But a major plus point for drivers is that PHEV plug-in hybrids and self charging hybrid models, unlike pure electric models, there is no driving range anxiety.

The Kia Niro PHEV is easy to drive, low cost for tax costs, good for real-life fuel economy and well priced for what you get – it’s a good package and becoming more popular. 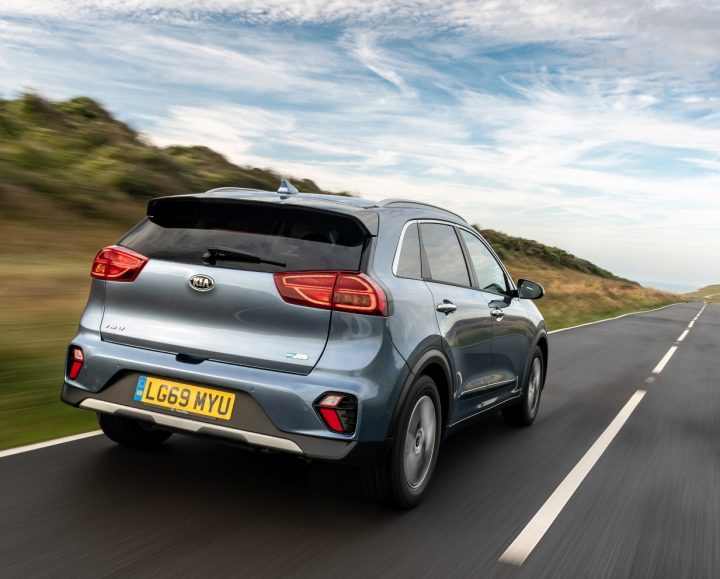 The ride is comfortable with its all independent suspension used in preference to the more common budget priced rear beam suspension for some  crossovers and SUVs; the handling is sure-footed, the  steering sharp  and its all backed up with a fine warranty; there’s  lots to like as increasing numbers of new buyer converts are finding out.

Against: Sluggish acceleration when loaded, official WLTP Combined Cycle figure is too far from reality unless used for commuter driving  or with regular mains battery charge-ups, no integrated sat-nav function for the grade ‘2’ spec level.