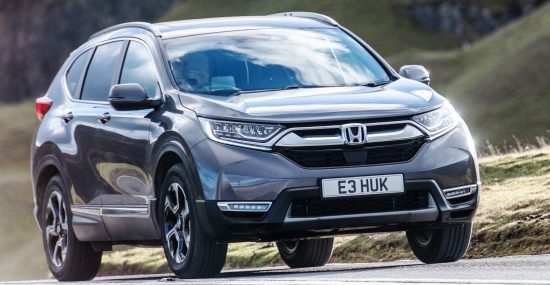 Honda is raising its game with the latest CR-V SUV, writes David Miles.

Announced in December for the 2021 model year, it’s available now only with petrol electric hybrid power in 2WD or 4WD forms depending on spec level chosen.

So it’s the latest 2021 model year CR-V we are reviewing with its new e:HEV branding and prices range from £30,880 for the base S spec 2WD version to £39,840 for the top spec 4WD model.  The spec levels are S, SE, Sportline, SR and EX and it is that latter 4WD EX version that Honda sent me to sample their hybrid power.

Another major changes for the 2021 model year is the fact that the latest CR-V is now only available as a 5-seat model, the 7-seat option has gone as the space utilized for folding down the two extra rear seats is given over to accommodating the lithium-ion battery pack.

We know the march is on for the move to electrified vehicles and hybrid power is just one step on the path to achieving new car zero emissions by 2030.  So like other manufacturers Honda have dropped diesel engine production altogether and most of its new models will be petrol-electric hybrid or pure electric. 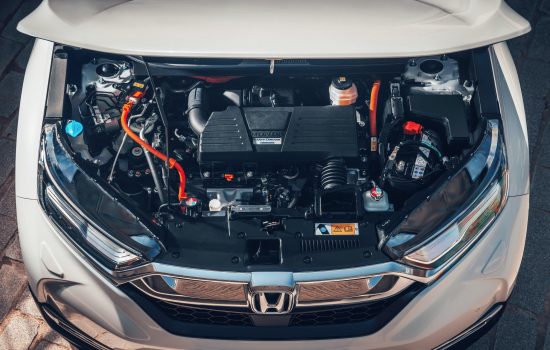 The latest hybrid CR-V uses a 2.0-litre, 4-cylinder Atkinson Cycle petrol engine with two electric motors, one a propulsion unit the other a generator with drive to either 2WD or 4WD through a fixed CVT type auto transmission with various driving modes including Eco and EV electric power only.

As it’s a petrol-electric hybrid it’s best to deal with the fuel economy and CO2 emissions now as this road test is mostly about the adoption of hybrid power. The WLTP rated Combined Cycle 2WD figure is 42.2mpg and the 4WD versions 39.2mpg and on my week long road test, but with Covid rules restricting long journeys, the overall figure for the 4WD version was 42.1mpg which for a large and well specced SUV with a petrol engine was impressively good and not far below what you might get from a previous turbodiesel model.

Not so good are the CO2 figures of 151g/km for the 2WD versions and 161g/km for the 4WD models so from last thursday,  1 April, the new increased First Year VED road tax is £545 and Standard rate £155 for all versions and increased Benefit-in-Kind company car tax is 34 to 36% depending on the model.  Insurance groups are 22 to 24 and warranty is a competitive 3-years/90,000-miles period. 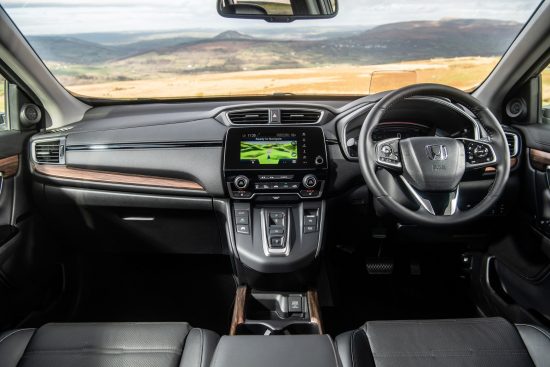 It still doesn’t have the best infotainment system compared to other new models – it’s a bit ‘old school’ in operation and layout.  Come to think of it, apart from the new hybrid technology, the latest CR-V remains a reliable, friendly, comfortable old school type of vehicle; you know what you are going to get, for most users it will be thoroughly fit for purpose.

It’s got lazy driving dynamics but the handling is sure-footed and the revised steering provides sharper responses for in-town driving.  Visually it looks much the same, it’s not a ‘stunner’ to look at but you just know what you are getting in a conservative sort of way. Where it does excel is interior passenger space, excellent load space and clear all-round visibility, it makes modern motoring life very easy.

Setting the CR-V hybrid generation apart from the other most recent and now discontinued models, the 2021 versions gain blue-ringed H badges and e:HEV nomenclature to highlight the electrified credentials. Other revisions include a new silver finish applied to key visual elements on the centre console, doors cards and dashboard elements. Other updates include a new 18-inch alloy wheel design for all grades and privacy glass from SE models upwards. The range topping EX grade also gains wireless smartphone charging for improved connectivity. 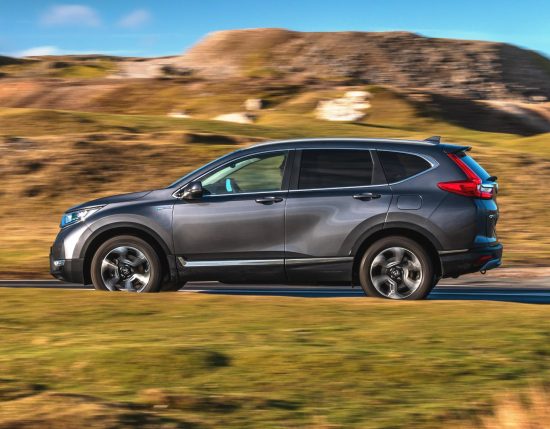 But it’s the hybrid technology which focuses our attention most. The CR-V Hybrid is equipped with a 2.0-litre i-VTEC Atkinson-Cycle 4-cylinder petrol engine with peak power of 145hp at 6,200 rpm and a powerful 184hp electric motor with torque of 315Nm.

The Hybrid has what Honda calls Intelligent Driving Modes with its i-MMD technology as it intelligently and automatically switches between three driving modes to provide the optimum driving efficiency. These modes are: EV Drive where the lithium-ion battery supplies power to the electric propulsion motor directly; Hybrid Drive, where the engine supplies power to an electric generator motor which in turn supplies it to the electric propulsion motor and Engine Drive where the engine is connected directly to the wheels via a lock-up clutch.

In most urban driving situations the CR-V Hybrid will shuffle between Hybrid Drive and EV Drive for optimum efficiency. In Hybrid Drive excess power from the petrol engine can also be diverted to recharge the battery via the generator motor. EV Drive permits pure-electric propulsion and gives the CR-V a zero-emissions range of around 1.2 miles depending on the driving condition and battery charge. 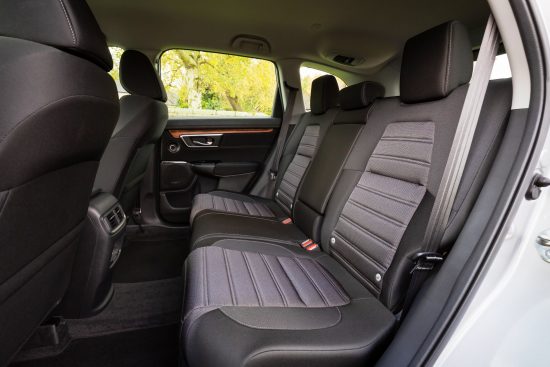 The Engine Drive mode is the most efficient set-up for cruising at higher speeds and it can be supplemented by an on-demand power ‘boost’ from the electric propulsion motor to supplement engine torque under some conditions.

At a 40mph cruise, the CR-V Hybrid will typically run in EV Drive for more than half of the time. At 62mph the car will be in EV Drive for approximately one third of the time and to achieve high cruising speeds it will run in Hybrid Drive. The software ‘brain’ of the i-MMD system decides when to shuffle between these modes to maximise efficiency without requiring input or thought from the driver – as I said – just plain easy to live with motoring.

Rather than using a conventional transmission a single fixed forward gear ratio creates a direct connection between moving components resulting in a smoother transfer of torque. This format means Honda’s system is more compact than a planetary eCVT typically found in other hybrid vehicles.

In addition the CR-V Hybrid has the first use of Honda’s new Active Sound Control that so-say provides drivers with the natural sound of acceleration relative to the engine speed. It worked perfectly well with smooth changes but like other CVT’s under strong acceleration during open road driving  still the engine note became more vocal than necessary – or was it ‘big-brother’ making sure the Active Sound Control provided the engine note it assumed I was expecting to hear? 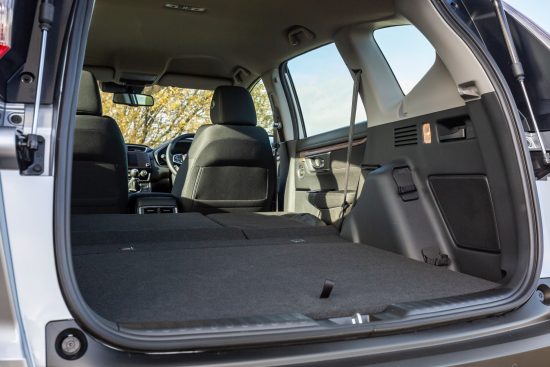 Also very worthy of mention was the very fast rate the battery was recharged during driving. Initially it was the usual way during faster open road driving to see the electric power gauge show a fast rate of depletion.

But then another look and the battery was nearly fully recharged again and able to go on supplying more power to the electric motor which assisted the petrol engine.  Much of this rapid charging comes from the excellent regenerative braking system which harnesses electric power for battery charging.

In normal driving conditions manual adjustment to the rate of deceleration is temporary and will automatically cancel when driving at a constant speed or accelerating. When the car is in Sport mode the manually selected rate of deceleration will be held until it is cancelled by the driver. 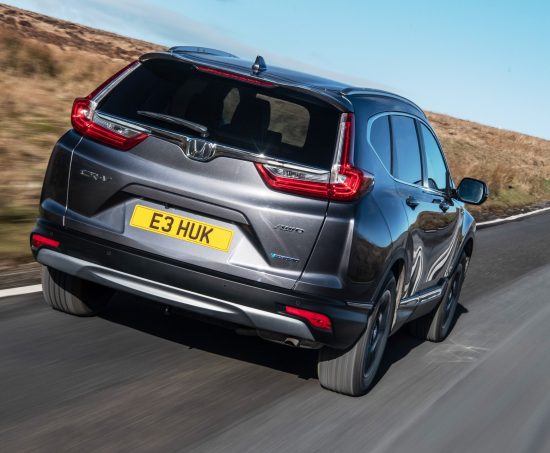 It sounds complicated but in reality it isn’t and it adds involvement and interest for the driver in today’s evermore technology intrusive motoring world.  The fact that my in-town driving with a few more miles in heavier but faster out of town traffic conditions and the vehicle still returned over 42mpg on average and at some points closer to 50mpg.

It is testimony that petrol-electric hybrid power helps with fuel economy but not always greatly towards lowering CO2 emissions from the tailpipe. It is a step towards electric motoring but with no driving range anxiety and no waiting at an en-route electric charging point for hours to recharge a battery before a journey can continue.