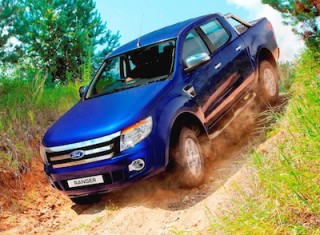 With the recessions of the late 1990s and 2000s seemingly over it is reported that we are now more affluent with more disposable income to spend.

Previously very popular recreational and workhorse pick-ups, picked-up their UK sales last year with a 15%% increase over 2013 with 33,843 registrations. So far this year they are up again by 22.8%.units over the same period last year.

The backbone model of pick-up sales in most countries are double cabs  used for lifestyle and sporting activities, commercial users such as builders, farmers, Park Rangers, the Police, Fire and Rescue Services, the Highways Agency and increasingly transport for war-mongers.

The Americans, Australians, South Africans and the Arab States have always been major markets for double cab pick-up sales but 18 years ago Mitsubishi started the double-cab trend of lifestyle and business use with their L200 range. At that time apart from its many uses the double cab also attracted far less company car Benefit-in-Kind tax as it was classed as a commercial vehicle, not a company car.

Then came the recessions which slowed retail and business sales and with bad vision the Government of the time closed the Benefit-in-Kind tax loophole and increased the tax payable by the driver if the vehicle was used for private use.

But the seed was sown as to the multi-purpose uses the double-cab could be put to so today there are many manufacturers offering  pick-ups in single, cab and a half and double cab body styles with two and four wheel drive offerings.  Most manufacturers also offer chassis-cab versions for the bespoke body manufacturing industry. The Mitsubishi L200 remains near to the top of the sales tree and their latest new generation range has just been premiered at the Geneva Motor Show.

Not being left behind is the UK’s best-selling brand for cars and CVs – Ford and they have their Ranger pick-up models, again following the design of three core body styles plus chassis cabs and two and four wheel drive options. A new generation Ford Ranger is due at the end of this year. Fords sells around 5,500 Ranger pick ups a year in the UK with 43% bought by retail customers and the rest by business user-choosers and fleet operators.

Depending on the version chosen the Ranger line-up offers a choice of three turbodiesel engines, the 2.2-litre, four-cylinder unit with the choice of 125 or 150PS power outputs and there is the lesser selling, but highly powerful 3.2-litre, five cylinder 200PS unit which develops 470Nm of torque from just 1,500rpm.  This engine is only available in the high spec Limited double-cab with a six-speed manual gearbox or in the range-topping Wildtrack double cab with either six-speed manual or automatic gearboxes.

Specification levels, again depending on the body configuration, start with the basic Ranger followed by XL, XLT, Limited and Wildtrack.  Just as the Ranger’s body style and specs are wide ranging to suit a wide variety of uses, commercial to lifestyle, so the prices are wide ranging as well.  They start at   £16,109 for a single cab with 2WD and range up to £26,626 for the Wildtrack 4WD double cab.   Double-cab models start from £19,954.  As they are technically still classed as commercial vehicles these are on the road prices but do not include Vat.   The really good news for company car users is that the Benefit-in-Kind tax is still relatively low. Currently it stands at £51.50 per month for 20% and £103 per month for 40% rated payers.

By paying this high price you would expect this particular version of the Ranger to match the specification of a well-appointed 4×4 SUV and it does plus it is more versatile to meet the demands of social and business use.  It has four passenger doors, it seats five people, it can tow up to 3,350kg with a braked trailer, it has a payload of 1,127kg and it is very long at 5,359mm.  The potentially all-import load box is 1,549mm long, 1,560mm wide and 511mm deep and the loading height is 835mm. Personalisation options include a variety of hardtops with and without windows for the load bay plus other styles such as a rigid and security efficient aluminium shutter as well as a soft tonneau cover option. Tow bars, roll-over bars and side sill protector bars and steps are also available and the customer has the choice ten vibrant modern bodywork colours. 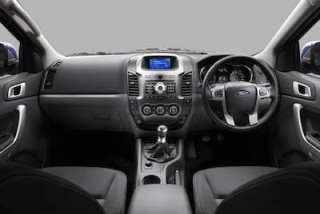 The Ford Ranger is very big and very bold to look at and it is not for the faint-hearted to drive in urban conditions but the elevated seating position does give a very good view of the surroundings.  The ride is firm but not uncomfortable and the strong suspension just shrugs off impacts from potholes.  The steering is on the heavy side at low speeds but gets lighter at higher speeds but it remains precise with relatively good feedback.

At the heart of this version is its muscular engine.  It is 3.2-litres using a five-cylinder turbodiesel layout. It pushes out 200hp but far more important is the massive 470Nm of torque which is delivered from just 1,500rpm.  Top speed is not relative to real-life use but it is quoted as 109mph and zero to 62mph takes 10.9-seconds.  Officially this vehicle will return 29.7mpg in the Combined Cycle and during my week long test driving which included motorway and country roads the figure was an impressive 29.5mpg.  That was the good news, the bad is the high CO2 emissions of 256g/km which means VED road tax if used as a passenger vehicle is £1,090 for the First Year rate reducing to £500 for Year Two onwards.  Insurance is a more reasonable 12E rating.

The 3.2-litre engine might not be the smoothest big capacity turbodiesel engine available today but despite its noise and vibrations it is hugely responsive and the six-speed manual gearbox ratios are well spaced to make the most use of this efficient torque output.   Unless fully loaded, first gear need not be used to pull away from standstill as it is a low crawler speed gear even though there is still the low ratio transfer box that can be used for serious pulling on and off road.  In real-life there is so much response from this engine that only second, four and sixth gear ratios need to be used if block-changing is the driver’s choice for open road travel.  Off road with 4WD low ratio selected, plus the descent control setting when needed, performance is safe and sure-footed and there is an 800mm wading depth for water hazards. 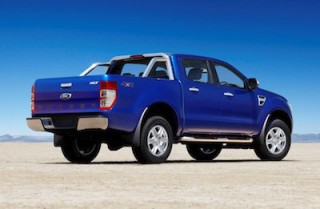 Where I live most rural residents and farmers have switched from using the aged Land Rover Defenders to adopting double-cabs.  These use modern technology, they have comfortable, versatile and very equipped interiors, they offer  multiple uses as family or work transport and they handle much better on-road and almost as well off-road and being modern they are more reliable.

It is not just country dwellers who find double-cabs their transport of choice. They are a style-statement, they tow boats, caravans, car trailers, jet skis, they are used for recreational pursuits – in fact they are a lifestyle choice, for work or play.

Against:  Expensive for retail customers because of the Vat element, vibrations and noise from the aged design engine, heavy gearchange.