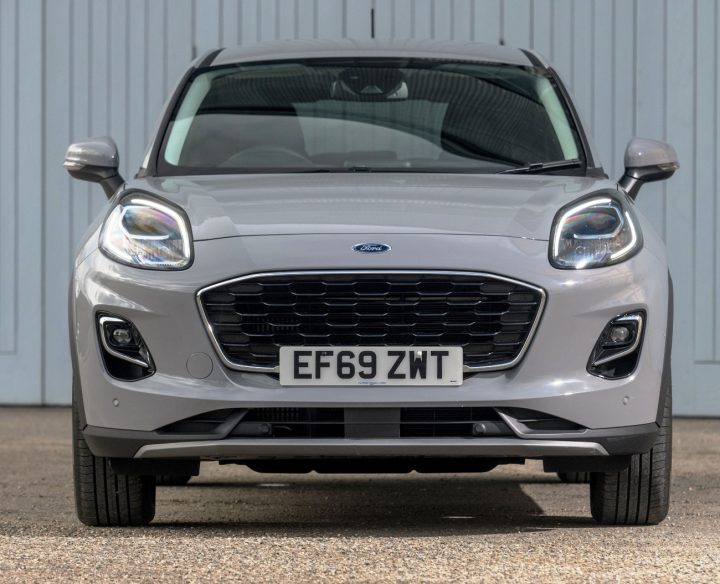 Ford revealed its new 5-door Crossover – you could call it a compact SUV –  towards the end of last year with UK deliveries scheduled in January, writes David Miles.

However the COVID-19 lockdown derailed delivery to over 7,000 early adopter customers awaiting this new addition to the market place and more than 90% have  chosen the petrol/hybrid 48V  mHEV models.

My initial test drive programme was a casualty of the lockdown with no cars available so it’s only now that my test car has arrived from Ford. It’s the Puma 1.0-litre 48-Volt mHEV ST-Line X, 5-door, 155hp with a 6-speed manual gearbox and like all Pumas front wheel drive.  The price is £24,420, close to the top of the price range which starts at £21,640 and extends through 12 derivatives to £26,840.

However my test car had numerous extra cost options which pushed the on-the-road price up to £29,370. Big ticket option items were the £900 Driver Assistance Pack which includes radar and other safety technologies plus a rear view camera and Active Park Assist, £950 for the opening panoramic glass sunroof, £800 for LED headlights, £600 for the handsfree power tailgate, £450 for the 19-inch matt black alloy wheels and £500 for a detachable towbar 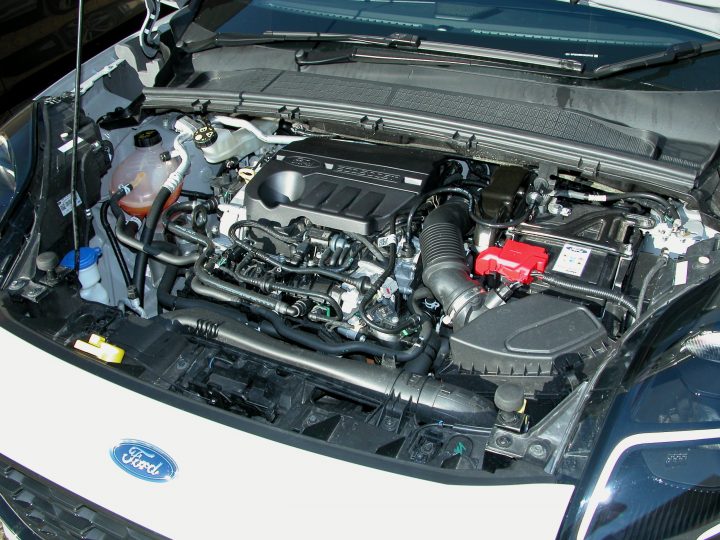 Slightly older drivers will remember Ford used the Puma brand name back in the 1990s for their smart but impractical 2-door coupe which didn’t sell well and had a short life. New Puma hits the current sweet spot for the compact SUVs/Crossovers.  I look on SUVs as being chunky, practical on/off roaders with an elevated ride height, sensible exterior body protection and with 2WD or 4WD or both.

Crossovers I see as essentially family type hatchbacks with an elevated suspension to visually ‘pimp’ the ride height and with added body protection trim – fashion over function in other words.  The Puma Crossover is slightly different as it offers more load capacity with its MegaBox added storage space beneath the boot floor potentially making it more of a function over fashion vehicle.

This 5-door Puma Crossover model is built in Romania and fits in Ford’s range between the EcoSport rugged small SUV model and the newly introduced and larger Kuga SUV which I’m also about to road test in the next week or so. To bridge the sales gap between Hatchback and Crossover/SUVs Ford also has ‘Active’ elevated suspension versions of their main-selling Fiesta and Focus ranges as well. 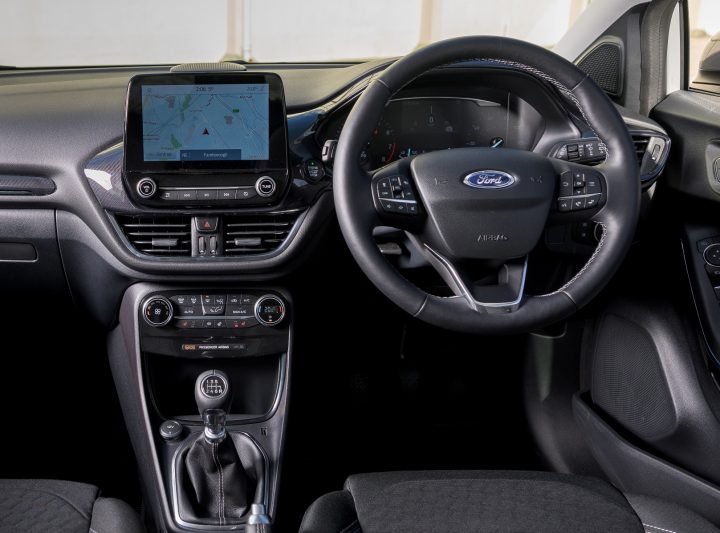 The new Puma uses a stretched version of the Ford Fiesta supermini class platform and in the flesh it looks much chunkier and larger than the high selling family member.  It is a similar treatment to that used by Fiat who expanded their 500 supermini range to include the 500X Crossover by stretching it in all directions and giving it a bolder chunkier elevated look.

Ford for the Puma, instead of adopting the usual ‘wedge’ roofline of an typical SUV, have a curved coupe look, like the Fiesta and Focus models, which doesn’t seem to reduce the headroom to any great extent.   The Puma’s headlights and rear light clusters also protrude from the top edge of the wings, similar to the Nissan Juke’s distinctive looks. At the front is a bolder version of the familiar Ford signature grille and at the rear of my higher spec test model a very attractive roof extension sports spoiler.

The Puma is 4,207mm in length, 1,805mm wide and 1,552mm high with a wheelbase of 2,588mm. The boot space is variable depending on the layout ranging from 456-litres with the rear seats in use up to 1,161-litres with the split rear seat backs folded down.  But if the spare wheel is fitted as an option, then the minimum boot space becomes 401-litres.  The spare wheel area is part of the MegaBox storage system which for good measure is lined to be waterproof with a drain hole in the bottom, ideal for wet wellies or liquid loads. With its fashionable Crossover/SUV styling, practical interior, added dimensions and new fuel efficient drivetrains, the Puma’s arrival is well timed for many people in these financially difficult times. Perhaps the rear seat legroom could have been a bit more generous for family users. 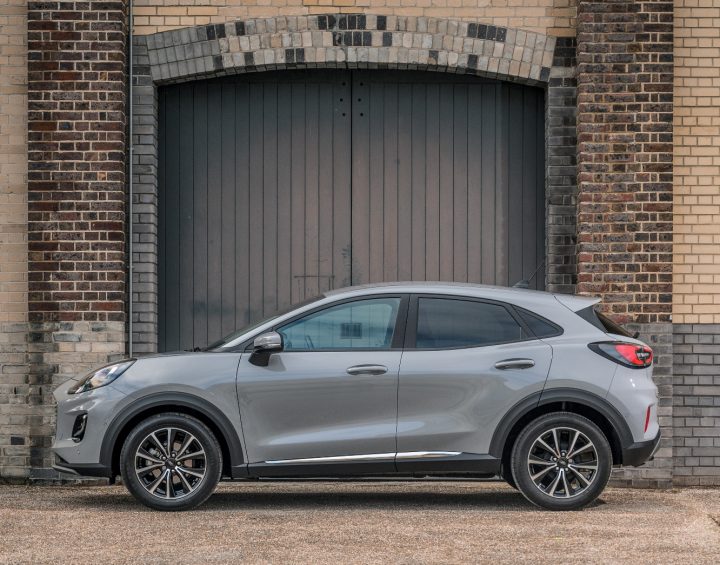 The Puma will compete with numerous Crossover or compact SUVs such as the Nissan Juke, Suzuki S-Cross, Peugeot 2008, Mitsubishi Eclipse Cross, Fiat 500X, VW T-Roc, Skoda Kamiq, SEAT Arona and even the Audi A2, but of course its major competitor could be the Fiesta where customers who need just that bit more space and fashionable street-cred styling might be tempted by new Puma.

The current Puma specification line-up is Titanium, ST-Line, ST-Line X and the just added the ST- Line X Vignale.  In this report I’m not going into detail re what spec items you get with each spec level – its typical Ford fare, sensibly comprehensive for each grade with reasonable trim quality. Each of the spec levels is available with Ford’s award winning EcoBoost 1.0-litre turbo-petrol 3-cylinder engine but with notable changes for some versions, mainly the addition of the new 48-Volt mild-hybrid technology branded mHEV, by Ford.  Cylinder deactivation is also included and a new 7-speed auto gearbox option has just been included for the one non-hybrid engine option. 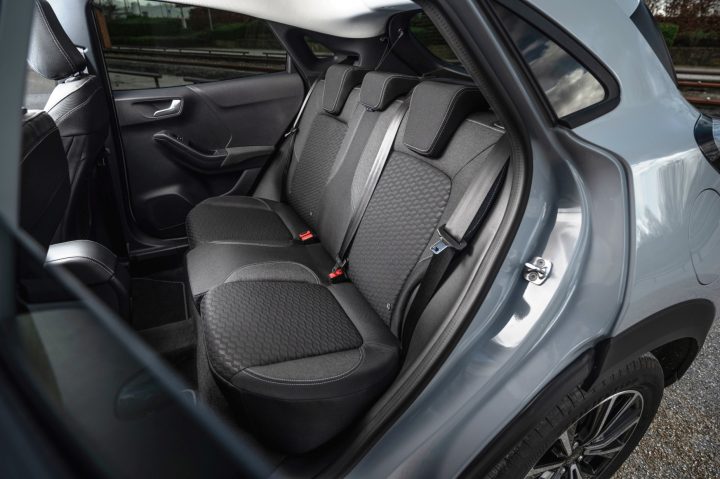 By adopting the mild-hybrid addition for two versions of the same engine it doesn’t contribute to any more horsepower but it does provide more torque.  The belt driven 48V, 11.5kW starter/generator motor hybrid system called BISG by Ford can provide up to 50Nm of extra torque for the 1.0-litre turbo engines.  This hybrid system reduces the amount of work the engine has to do so the fuel efficiency improves by up to 9% and it also delivers 50% more torque at lower rpm.

Using the BISG has allowed Ford to lower the compression ratio of their 3-cylinder engine and so use a larger turbocharger to reduce turbo-lag during acceleration.  The BISG system also provides a faster restart time for the Start-Stop system and the restart after the engine coasting phase on the overrun plus it enables regenerative braking energy capture to put electric current back into the lithium-ion battery. 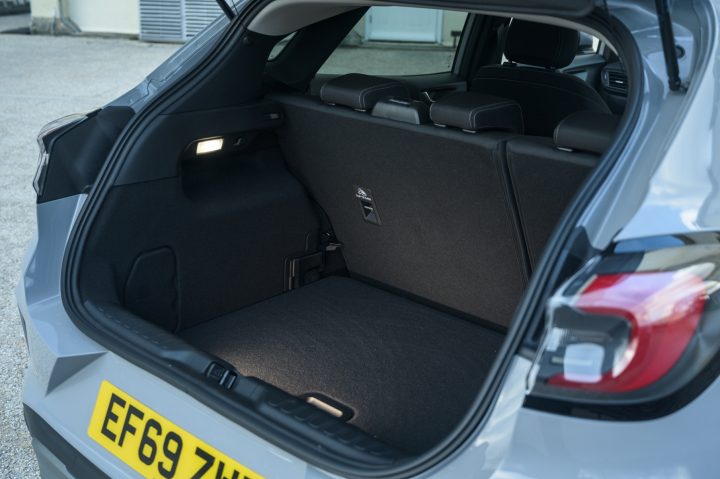 The BISG torque permits seamless cylinder deactivation when 3-cylinder operation become 2-cylinders for light-loads and reverts to 3-cylinders in just 14-milliseconds: clever stuff which really works. Understandably over 90% of customers specified a hybrid so it’s just a shame it’s only available with manual gearbox.

Just by having that extra hybrid supplied torque from lower engine speeds really suits UK driving conditions, especially on rural winding and  hilly routes.  To further enhance the driving experience in a practical way the Puma has a Drive Modes function with Normal, Eco, Sport, Slippery and Trail settings to suit driving conditions, however a reminder that  its only a 2WD model.

Despite its size-hike over the Ford Fiesta all handling and driveability aspects the Puma proved to be sure-footed and relatively agile. Despite the stronger suspension settings and the optional larger 19-inch wheels on my test car the ride comfort was not unduly firm and the increased ride height didn’t produce noticeably more body roll during cornering.  Visibility was good front and sides but a shade marginal at the rear corners and through the tailgate window so I was rather glad that the optional rear view camera was fitted. 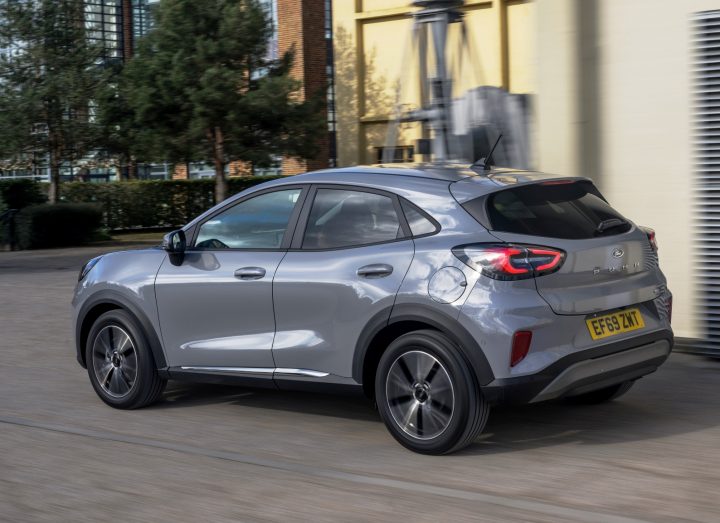 Just like the sales leading Ford Fiesta and Focus in their class of family cars, Puma sets the standard in the handling department. Low running costs, comprehensive equipment levels are also major reasons to give the new Puma serious consideration in a motoring world where realistically we should consider a move to practical motoring ways rather than egotistical ones.

Recently one major UK motoring magazine in their annual awards named the new Ford Puma ‘a game changer’, another leading publication made it their ‘Car of the Year, who’s to say they are wrong in the real motoring world.