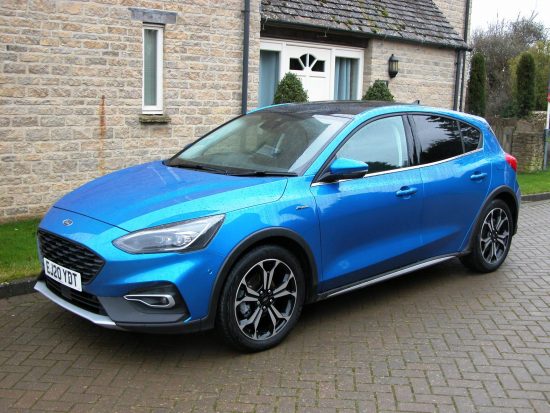 Ford say their new passenger cars are going all electric in Europe and will not have internal combustion engines from 2030, writes David Miles.

Their commercial vehicle ranges will follow that move a couple of years later and by 2026 all their new cars in Europe would be fully electric or plug-in hybrids.

But for the here and now in addition to conventional petrol and diesel labelling the Society of Motor Manufacturers and Traders, who clarify car and commercial vehicle type segments and engine titles, now lists other powertrain types. These are BEV meaning Battery Electric Vehicle, PHEV – Plug-in-Hybrid Electric Vehicle, HEV – Hybrid Electric Vehicle and MHEV Mild Hybrid Electric Vehicle which can be applied to petrol or diesel engines. And it’s the MHEV title linked to a new petrol engine that I’m trying in the week’s road test, namely the Ford Focus Active X Vignale Edition 1.0T  155hp EcoBoost Hybrid 6-speed manual – quite some long title.

The all-new Ford Focus we remember was launched mid 2018, 20 years after the first generation. This generation brought to market new technology, more comfort, better interior space and a more polished driving experience even though the model it replaced was the class leader in a very competitive market sector. 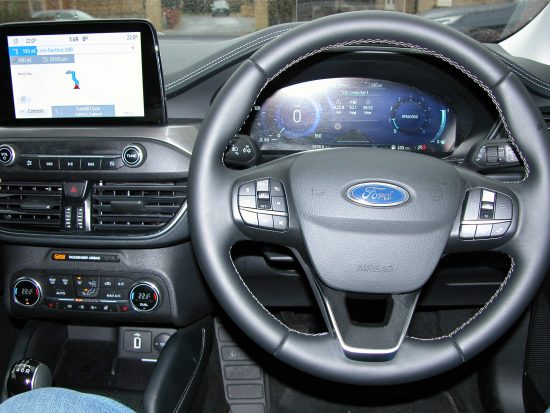 Nowadays the lower-medium sector sized family cars have hatchback and estate car forms like the Focus family and have to compete with the likes of the Vauxhall Astra, VW Golf, Kia Ceed, Renault Meganne, Skoda Scala, SEAT Leon and Toyota Corolla plus there are the premium brand Audi A3, BMW 1-Series and Mercedes A-Class models. In addition there are    similar sized SUVs such as the Ford Puma/Kuga, VW Tiguan and Kia Sportage. Then we have pure electric models such as the Tesla 3, Kia e-Niro and Hyundai Kona Electric.  It is a minefield of choice and we haven’t yet got to choose an engine or spec level. 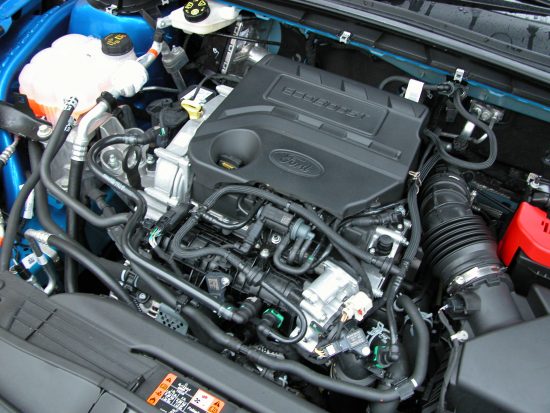 As for engine options, depending on spec level, there are turbo petrol units such as the 1.0 EcoBoost 125hp, the new 1.0 EcoBoost Hybrid 125hp and 155hp units and turbodiesel 1.5 EcoBlue 120hp and 2.0 EcoBlue 150hp power choices. There are also the higher performance ST 2.3-litre EcoBoost 280hp turbo petrol and 2.0-litre EcoBlue 190hp turbodiesel units.  All Focus models are front wheel drive with the availability depending on engine choice of 6-speed manual or 7 and 8-speed auto transmissions.

Prices are wide ranging starting at £22,210 for a Hatchback and £23,370 for an Estate and they climb to £36,100 for an ST automatic Estate.  Around £24k will get you a non-Hybrid 125hp turbo petrol manual Hatchback with the popular Titanium Edition spec and just over £1k more for the equivalent powered and spec level Estate.

How engine technology has improved in 10-years with the new 1.0-litre, 3-cylinder EcoBoost turbo petrol unit with Hybrid support turning out 155hp whilst a decade ago it took a 2.0-litre, 4-cylinder Focus petrol engine to provide 145hp.

The BISG also acts as a motor integrating with the engine and using the stored energy to provide torque assistance during normal driving and acceleration as well as running the vehicle’s electrical ancillaries. Torque output is 240Nm for the 155hp Hybrid unit.

The intelligent, self-regulating mild-hybrid system continuously monitors how the vehicle is being used to determine when and how intensively to charge the battery for optimal benefit, and when to utilise the stored battery charge using one of two strategies:

Strategy one: Torque substitution deploys the electric motor functionality of the BISG to provide up to 24Nm of torque – reducing the amount of work required from the petrol engine and contributing to CO2 emissions from 116g/km (WLTP) and fuel efficiency from 51.4mpg (WLTP) depending on the model and equipment level.

Strategy Two: Torque supplementation deploys the electric motor functionality of the BISG to increase the total torque available from the powertrain by up to 20Nm above the level available from the petrol engine alone at full load – and deliver up to 50% more torque at lower rpm for optimal performance

The more powerful BISG enables the Focus EcoBoost Hybrid’s Auto Start-Stop technology to operate in a wider range of scenarios for improved fuel savings. It is able to restart the engine in just 350-milliseconds, the Stop-in-Gear function can switch off the engine when coasting to a stop even when the vehicle is in gear with the clutch pedal depressed and can be adjusted to activate from 9mph, 12 mph or 16mph. 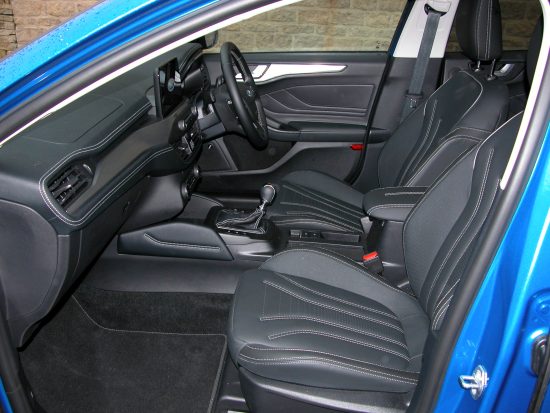 In addition, Focus EcoBoost Hybrid powertrains feature fuel-saving cylinder deactivation technology for the 1.0-litre EcoBoost engines. Cylinder deactivation improves fuel efficiency by automatically switching off one of the three cylinders when full capacity is not needed, such as when coasting or cruising with light demand on the engine. The system can disengage or re-engage one cylinder in 14-milliseconds with no compromise in performance or refinement

But the 155hp unit with its 6-speed manual; gearbox and more torque from the engine and BISG coped better with driving on winding country roads. Even though the 5th and 6th gear ratios, like the Fiesta Hybrid’s, are long-legged to improve cruising speed fuel economy, the larger and heavier Focus Hatchback  just didn’t need the constant changes of gear at speeds from 40 to 60mph which the lesser powered but lighter in weight Fiesta did.

Test driving real-life fuel economy didn’t differ greatly either with both cars used for the same motoring journeys and mileage due to the limits of lockdown driving opportunities even though we Journalists are allowed to work.

The Fiesta 125hp Hybrid 5-door Hatchback returned 52.1mpg, the 155hp Hybrid Focus 5-door Hatchback returned 49.8mpg.  Top speed for my 155hp Active X test car is a healthy 129mph and the far more important zero to 62mph acceleration time is 9.5-seconds but it’s the close to 50mpg easily achieved average that impressed me most from the relatively short distance journeys and very cold weather during the test driving time.. 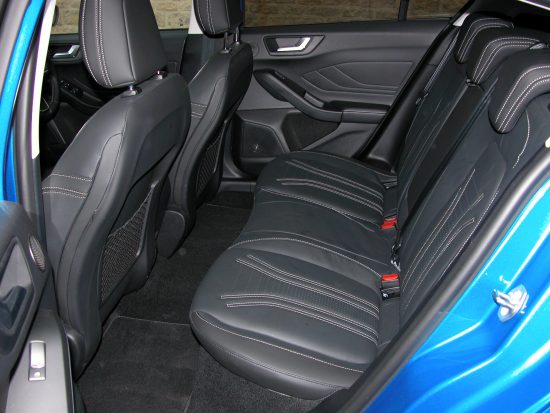 What are the differences the Active X SUV/Crossover styling inspired versions have over regular other Focus models?  Active spec is available in five-door Hatchback and Estate body styles with rugged exterior styling which includes stronger looking bumpers, wheelarch and side sill protection mouldings and underbody protection skid plates.

The Active X has a raised ride-height of 30mm at the front and 34mm at the rear, a bespoke chassis configuration to retain its legendary Focus driving dynamics.  The raised ride height also provides enhanced rough-road ability and a higher driving position for urban and countryside driving conditions.  Ride comfort is compliant despite the suspension changes and the handling well balanced as with any other Focus model

The active lifestyles of Europe’s growing numbers of SUV and Crossover customers are further provided for by the addition of bespoke Slippery and Trail modes to the Focus traditional Selectable Drive Modes function plus standard-fit roof rails for the estate Active version to help carry bicycles or sports equipment.

On the inside there is a leather steering wheel and gearknob with a leather grip, bright elements on the dashboard and door panels and Active branded door sill scuff plates. The bolstered seats are trimmed with distinctive Active cloth featuring blue stitching, and mats with blue stitching are also available. 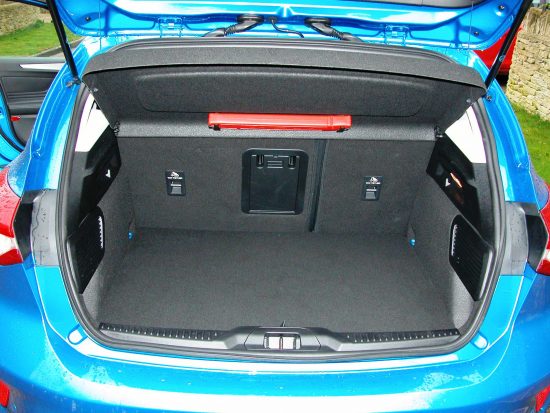 Rear passengers don’t miss out either as knee clearance is improved by more than 50mm, and rear shoulder-room is increased by almost 60mm compared with the previous Focus models. The impression of spaciousness is enhanced with a rear door design featuring windows that stretch into the rear pillar.

The latest Focus, Active and other versions, give me the impression they will appeal to a modern generation of buyers, plus longer serving ones, who want to downsize from larger D-segment cars. The same applies with specification levels as well which throughout the Focus range are higher than before bringing many larger car features into the Focus family.

Without going into too much detail the Vignale Edition spec of my test Active X model was comprehensive with items such as a B&O premium sound system, sat-nav, lots of driving safety support systems, FordPass Connectivity, Heads-Up display, Cruise Control and so on. All good examples of larger car features being made available in a slightly smaller car.

My only gripe is that the new 1.0-litre, EcoBoost Hybrid 155hp petrol engine is not available with an automatic transmission, it a 6-speed manual and that surely doesn’t help attract down-sizers who generally use higher spec cars mostly with auto transmissions. If you want auto you have to use the 125hp petrol version of this engine or the 1.5-litre 120hp turbodiesel engine. 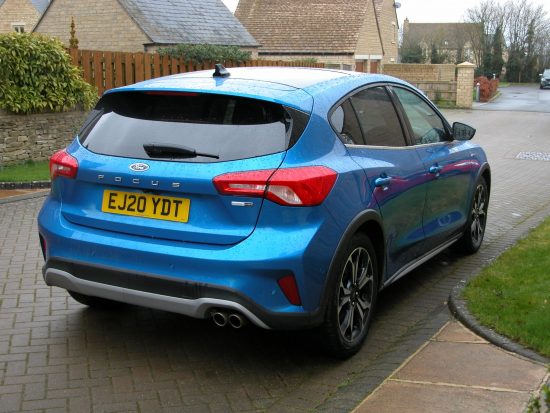 Overall I liked the new 155hp petrol electric Hybrid version of the 1.0-litre turbo petrol engine more than the 125hp option which felt lacking in low down torque. I also like the Active styling spec and tweaks plus the raised ride height slightly more than a conventional Focus model. It just has that more noticeable up-market styling edge for me as a country dweller.

This particular Focus Active X Vignale Edition 155hp Hatchback I found very practical to live with, comfortable, roomy, easy to park, quiet and very well equipped but it would have been even better with an automatic gearbox.

Against: No auto gearbox option with this 155hp engine, ungenerous warranty.