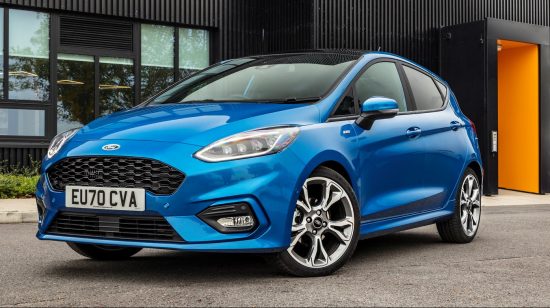 One of the many recent updates to Britain’s best-selling car in 2020 was the introduction of mild hybrid support for their 1.0-litre, 3-cylinder turbo petrol 125 and 155hp petrol engines used in the Fiesta and other Ford model ranges, writes David Miles.

But it’s the latest Fiesta 1.0 mHEV 6-speed ST-Line Edition 5-door version I am trying for this part of the lockdown period priced at £21,160.

This price was boosted by £500 for the Chrome Blue premium body colour pack and infuriatingly £900 for the Driver Assistance Pack which contains many desirable safety support functions to make an overall on-the-road price of £22,580. 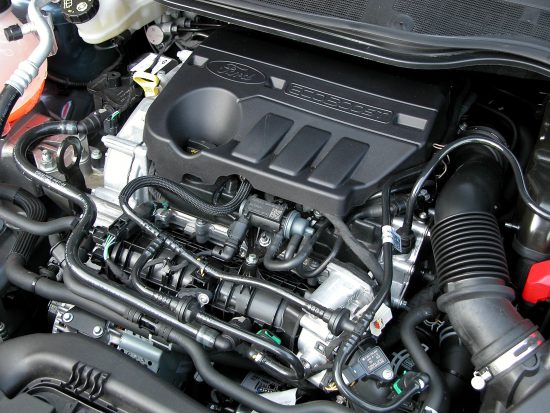 Prices are as wide ranging as the engine and spec options starting at £16,640 for the lowest spec lowest powered 3-door version up to £28,770 for the hottest 200hp ST Edition variant. A range sweet-spot 1.0 EcoBoost 125hp Titanium manual 5-door version now costs £20,060 on-the-road after a recent price increase. If you want an auto with the same main selling 125hp mHEV new engine you will need to move up a grade to Titanium X and that model costs £22,785.  But in today’s stressed sales market prices are more negotiable than ever.

To get to the nitty-gritty of the latest Fiesta hybrid and other technical changes for the 1.0-litre EcoBoost 125 and 155hp engines, it’s the same technology as used in the new Puma Crossover Hybrid models launched late in 2019. 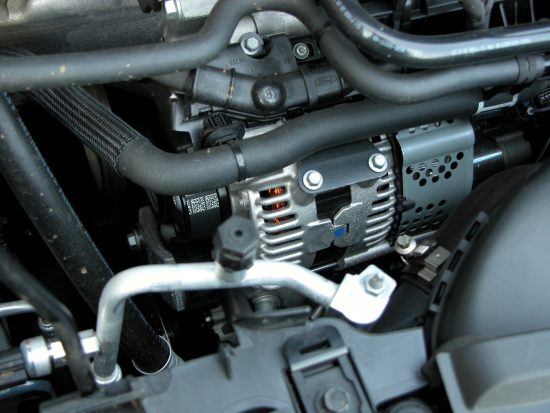 The BISG also acts as an electric motor integrating with the engine and using the stored energy to provide torque assistance during normal driving and acceleration, as well as running the vehicle’s electrical ancillaries.

The intelligent, self-regulating mild-hybrid system continuously monitors how the vehicle is being used to determine when and how intensively to charge the battery for optimal benefit, and when to utilise the stored battery charge using one of the following two modes.

Mode one: torque substitution which deploys the electric motor functionality of the BISG to provide up to 24Nm of torque – reducing the amount of work required from the petrol engine and contributing to CO2 emissions as low as109 g/km WLTP and fuel efficiency from 52.3 mpg WLTP but these figures vary according to what spec level of equipment is chosen. Using torque substitution the 125hp EcoBoost Hybrid delivers a fuel efficiency improvement of almost 5% compared to the former 1.0-litre petrol 125hp EcoBoost engine. 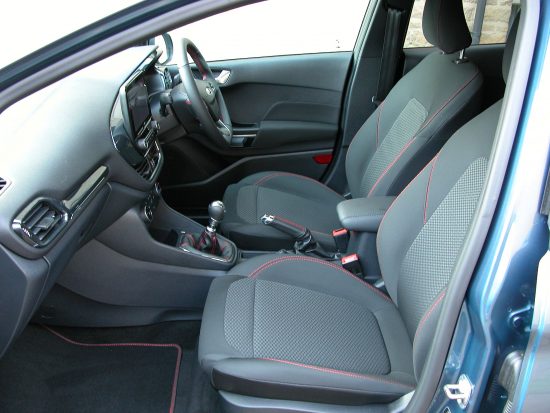 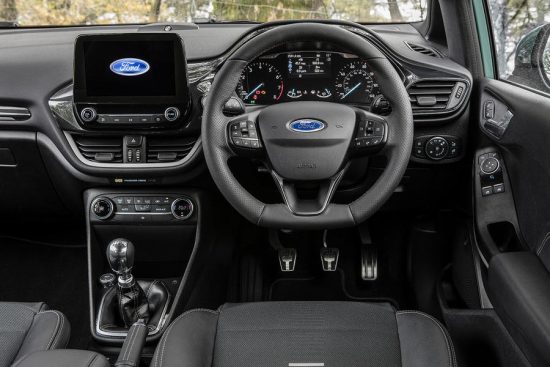 It lets the Auto Start-Stop system to operate in a wider range of fuel-saving operations such as automatic engine coasting at speeds below 15 mph even when the vehicle is in gear.

Cylinder deactivation also makes an appearance in the latest 1.0-litre EcoBoost petrol engines with the mHEV 125hp and the non-hybrid 95hp units both gaining this function. The technology improves fuel efficiency by automatically switching off one of the three cylinders when full capacity is not needed. 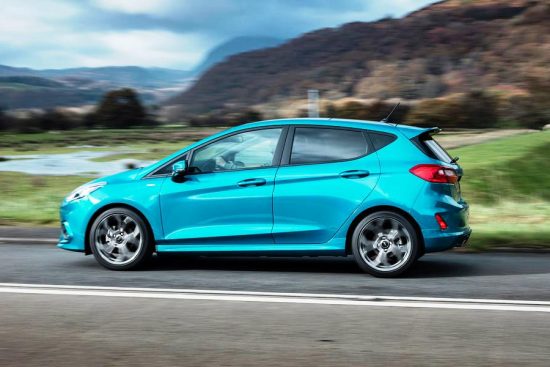 Such as when in coasting mode or cruising with light demand on the engine and can disengage or re-engage one cylinder in 14-milliseconds.  I found with this cylinder deactivation function there was no obvious compromise in performance or refinement and seamless in real-life motoring conditions.

In test drive operation my 1.0-litre 125hp mHEV test drive model with the ST-Line Edition spec has a torque figure of 210Nm with a top speed of 126mph and zero to 62mph taking 9.4-seconds with a WLTP Combined Cycle driving range ranging from 45.6 to 62.4mpg.   My week of basically relatively short run driving during the lockdown period but with one longer business trip included, returned 52.1mpg overall. The engine felt strong as long as the car was driven using the gear-change prompts, fall below the rev-band sweet-spot and response was limited requiring a drop of at least one ratio to get the engine in its happy zone again. 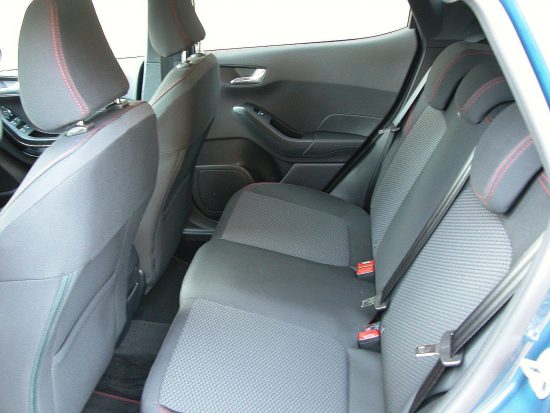 That was made more obvious by the fitting of tall fifth and sixth gear ratios to minimise Combined Cycle fuel consumption.  I’d have thought the extra torque supply from the electric motor would have provided more torque assist at lower rpm speeds. On winding country roads I found it off-putting to be driving in lower gear ratios than is usual even for modern small capacity petrol engines.

On the open roads things felt better but it’s quite clear fifth and sixth gear ratios are meant for open road cruising to improve fuel economy rather than responsive performance which was a bit out of kilter with my test car’s sporty ST-Line specification.

In all other respects, overall the Fiesta 5-door hatch is the Fiesta we buy in significant numbers. It’s the sum of its parts that appeal. It is currently the UK’s best handling supermini sized hatchback but it’s not the roomiest, it is competitively priced, has economical running, servicing and parts costs  supported by lots of dealerships, it’s a peace of mind purchase. 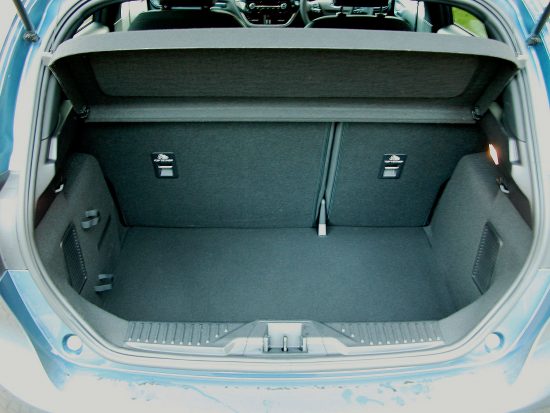 The ST-Line has a sportier image with bespoke badging, body kit, sports pedals and a higher specification. Ride comfort is not the best attribute with the sports suspension and 17-inch wheels producing a firm ride over potholes and poor surfaces. On the plus side the grip was excellent, handling really well balanced and the steering neat and precise with good feedback. 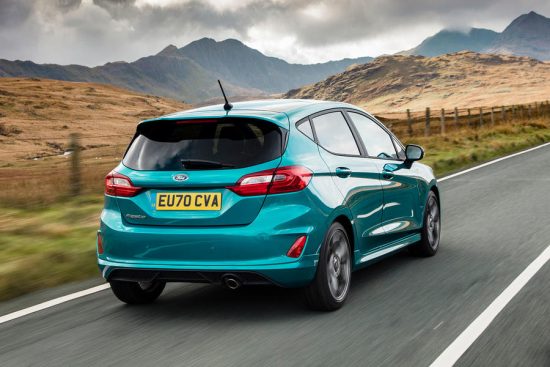 With a raft of other all-electric supermini sized competitors on the market and gaining sales helped by a £3,000 grant off the purchase price and zero, or low cost VED road tax and company car taxes, the Fiesta’s reign as the best-seller in its UK supermini sector is under threat.

But at least the new mild hybrid versions show Ford are on the road to electrification throughout their model ranges.