There are Saloons, Touring estates, Active and Gran Tourer MPVs, Coupes and Gran Coupes to start with.

Then we have Convertibles, Sports Cars, SUV X models and an increasing number of current and future ‘I’ all-electric models.

Backing up this formidable array of body types of course are multiple trim and spec options, including the iconic ‘M’ performance brand. In addition BMW offers petrol, diesel, hybrid, plug-in hybrid and all-electric powertrains with 2WD and xDrive traction options as well.

BMW UK prices of course vary enormously across this wide range of model types starting from around £24,500 for a 1 Series 118i petrol small hatchback up to £130,500 for an M8 Competition Convertible 625hp.

For this week’s road test I’m trying a model somewhere near the practical end of the huge and varied model line-up but with BMW’s new high performance M340i 6-cylinder turbocharged petrol power unit with xDrive traction. So space and pace are on offer with the new M340i Touring estate. 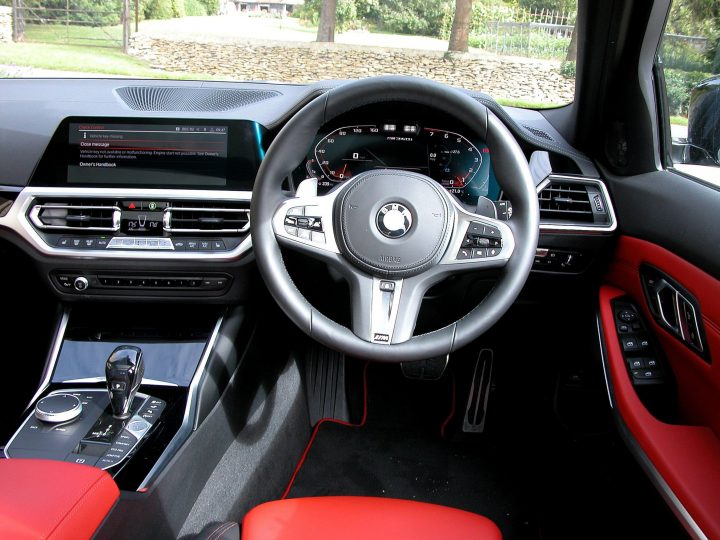 From the BMW price list I counted 37 different core models in the 3 Series Touring range; 18 diesel, 11 petrol and 8 PHEVs. The main spec levels, depending on the engine option chosen, are SE, Sport, M Sport, M Sport Pro Edition then the xDrive variants of those same spec listings. Right at the top of the estate range are the outright performance M340i xDrive and M340d xDrive versions.

It is a similar line-up for the 3 Series Saloon range as well but that line-up will soon get the hot-shot M4 450hp turbo petrol variant but it’s not for the Touring estate line-up so my M340i 374hp turbo petrol model is as ‘hot’ as it gets for the estate line-up.  For reference the M340d diesel Touring has 340hp.

The new BMW 3 Series Touring is the sixth generation of this five door estate range covering 33-years and close to 2-million global sales. Today it faces stiff sales competition from conventional premium brand family estates such as the Audi A4 Avant, Mercedes C Class Estate and Volvo V60 but unlike its early predecessors it also has to face the competition from numerous SUVs including BMW’s own X3 range.

Given the 3 Series Touring is the smallest estate in the extensive BMW line-up it is a practical size if not quite matching that of a comparable SUV. Likewise the rear seat legroom has improved over previous versions but it’s still not ample for adult passengers. 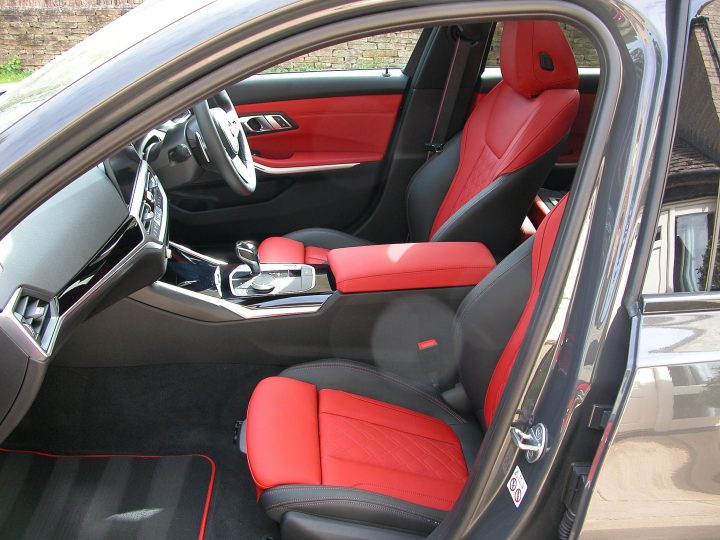 Far more important to potential owners of the new M340i version in my hands is what is under the bonnet. Yes it’s a ‘straight-six’ petrol engine with M TwinPower Turbo technology which uses a twin-scroll turbocharger, direct injection, ValveTronic variable valve timing and Double-Vanos variable camshaft timing for intake and exhaust sides.

The outcome of this new design is 374hp of power up to 6,500rpm and 500Nm of torque, a huge spread of ‘grunt’ available from 1,850 to 5,000rpm. The outcome is huge response more or less right through the entire re-range so it’s easy smooth  power delivery at low speeds as it is at producing extra ‘grunt’ at high cruising speeds. Top speed is restricted to 155mph with the zero to 62mph acceleration time of just 4.5-seconds.

Those figures are very appealing for driving enthusiasts but the tax costs are not so agreeable. The latest WLTP Combined Cycle figure is 33.2 to 33.6mpg and my week of motoring covering all types of roads and traffic conditions was a very accurate 33.8mpg. It just goes to show big engines don’t work as hard as highly stressed smaller capacity units so they more easily match their real-life and official fuel consumption data.

As for CO2 emissions, now at 191g/km under the new from April WLTP ratings, all that power and performance does have extreme running cost tax consequences. The VED First Year rate road tax bill is now £1,305 followed by £150 Standard rate and with the £325 annual supplement for 5-years as the estate costs over £40k. The BiK company car tax is the maximum 37% and insurance Group 38E. 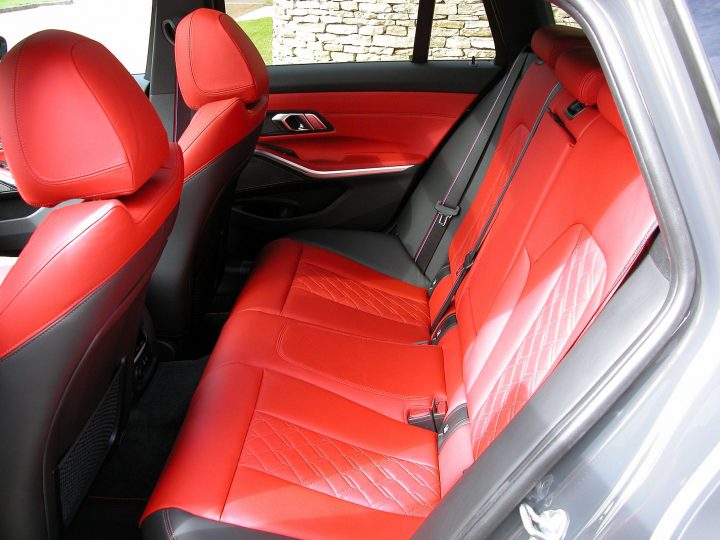 If all those figures sound bad then the exhaust soundtrack does not and its tone will lift any petrol-head’s spirits. The M Sport exhaust system provides that 6-cylinder burble on start-up but when Sport or Sport+ modes are selected a flap controller enriches the twin exhaust system’s tones even further.  I know it’s ‘automotive window dressing’ but why not?

Drive to the wheels is via the latest 8-speed Steptronic Sport auto transmission with ideally spaced close ratios allowed by the wide spread high torque output of the straight-six engine.  Gear changes can also be done manually via the gear selector lever or shift paddles on the steering wheel.

For even more performance there is a launch control function as well – not that a family estate really needs one. The xDrive all wheel drive facility has a rear-biased setup to maintain the true sports driving experience of an M car.

The model also has as standard a 10mm lowered ride height M Sport suspension with revised damper settings to reduce rebound front and rear and to restrict body-roll during cornering.  Adjustments to the suspension performance can be made in all driving modes from Sport+ to Comfort and Eco Pro settings.

The tech-spec M Sport upgrades are huge and the styling enhancements turn what is a good looking compact family estate into something a shade more edgy, not brash but classy. 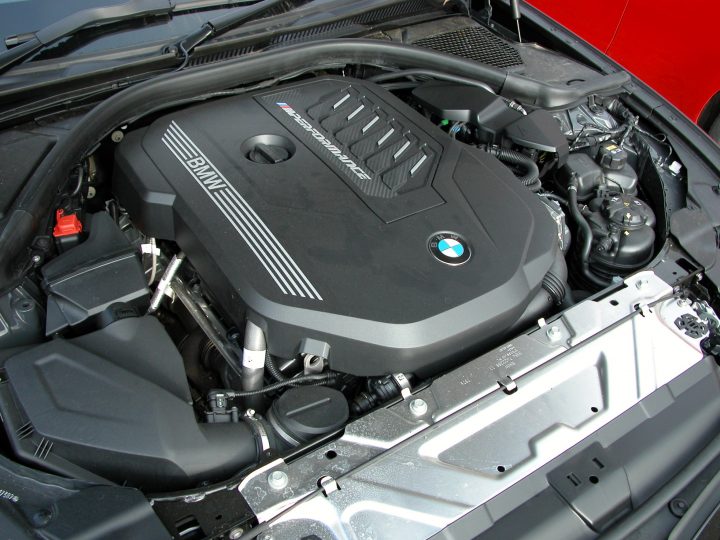 The front apron, side skirts and rear end have all been designed to optimise the air cooling needed for the drivetrain plus of course enhancing the aerodynamics. There is another new treatment of the BMW kidney grille, this time with mesh inserts, it doesn’t look classic BMW but it might have been worse like other recent grille designs have been.

There are trapezoidal exhaust tailpipes, M rear spoiler and the must-have discreet M badging around the estate’s body

All the equipment you might expect is included everything from three-zone air conditioning, Park Distance Control, BMW Live Cockpit, a brilliant sat-nav system including real time traffic information and the usual safety and connectivity functions.

However BMW UK still managed to fit over £7ks worth of options to my test car  giving a final on the road price of close to £59k which however much you enjoy hard-core driving performance is unrealistically steep for what is essential an upmarket family estate car.

I digress but as an example a couple of the extra cost options were upgraded auto and laser lighting pack at £1,500 and the, technology pack with head-up display, BMW Gesture Control, uprated surround sound and WiFi hotspot preparation etc costing £1,900. 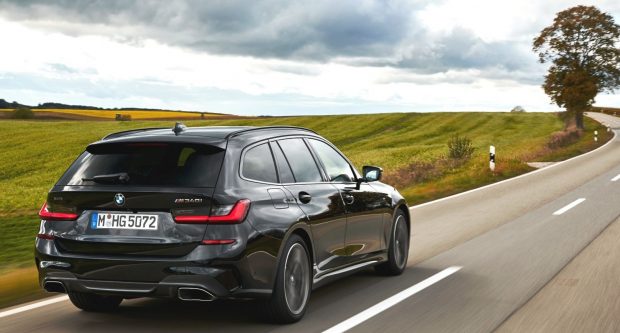 The new BMW M340i xDrive Touring will be a memorable test car for me, not because of its high cost but because of its huge and refined performance.  With no pure M3 Touring version due, unlike the new M3 Saloon, the M340i is as close as we will get to having an M3 Touring estate, so enjoy it. I did, very much!

Against: Huge cost to own one in purchase/lease costs and tax penalties, not that roomy for rear seat adult passengers, some options should be standard fit for this price.