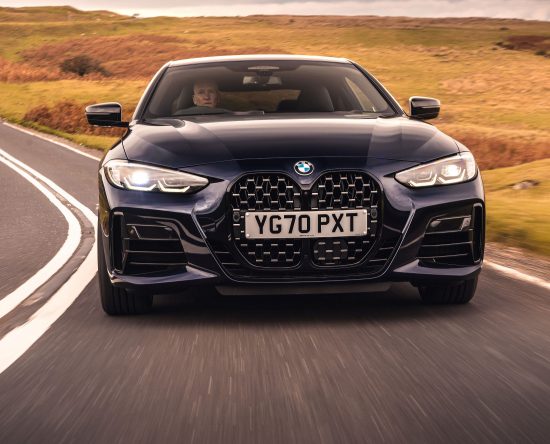 In these days of health and safety in this Covid era holding mass motoring media product test driving events is not easy, you need space.

And to meet that space requirements for this week’s BMW UK Media Showcase event of their new and updated models they used an aircraft hangar at the Bicester Heritage Centre for the media to assemble and collect their test drive cars.

This event heralded the arrival of numerous updated models for the 2021 model year, new RDE2 emission compliant engines,  more hybrid and PHEV versions but centre stage of this Showcase event was the UK launch of the new 4 Series Coupe..

The original 4 Series was a range extension of the 3 Series that happened in 2013 with 4 Series name being given to Coupe, Convertible and Gran Coupe models to promote their sportier nature. They were facelifted in 2017.

The wheelbase has grown by 41mm to 2,851mm but only 6mm has been added to the vehicle height which is now 1,383mm. More muscular looks allow increased track widths of 28mm at the front and 18mm at the rear with short overhangs, slender pillars, long doors, frameless windows and a flowing roofline combine creating a sleek aerodynamic look with huge purposeful kerb appeal.

A very striking element of the front end design is the huge BMW kidney grille in its latest enlarged form with its upright elements connected in the centre. BMW insists it reprises a design featured from the company’s past but adds a modern twist.

It is framed by surfaces with a three-dimensional structure and like the contours of the headlights and the bonnet’s arrow shaped lines they all zero in on the grille.  I’m still not sold on its design but it’s becoming more familiar.  Bold air vents in the lower front apron add to its hefty front end design. 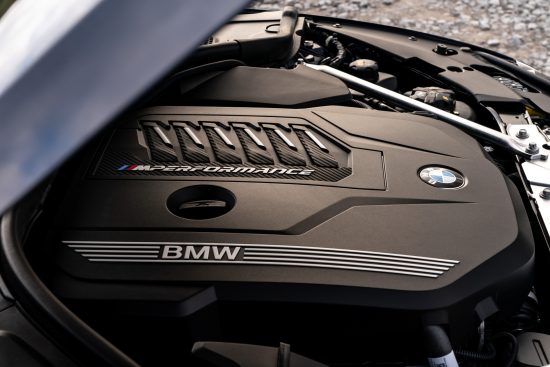 Under the skin the new 4 Series Coupe, whilst using the same platform and most components as the latest 3 Series models, has received specific changes to the bodyshell and platform to lighten and strengthen it in keeping with its sports handling.

At launch this month the new range is available with the following model line-up with turbocharged engines.  The starter model and likely best selling version is the 420i petrol 184hp, 300Nm M-Sport priced at £39,870.

Mild hybrid technology with a 48V starter-generator and second battery is fitted to all diesel engines and the straight-six petrol unit of the flagship M440i xDrive version. 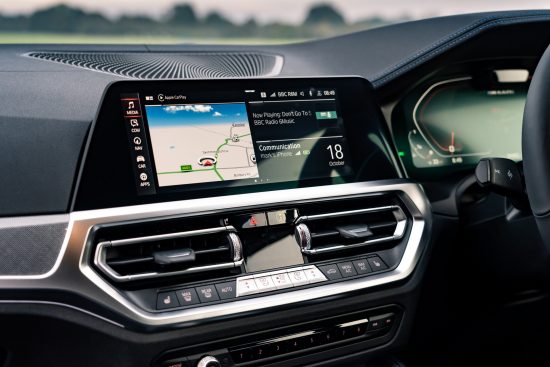 Arriving in March next year  will be straight-six turbodiesel 430d xDrive M Sport 286hp 650Nm of torque and the M440d xDrive with 340hp and 700Nm. The prices of these two models are to be confirmed. Current 4 Series models have an 8-speed Steptronic auto/manual sports transmission as standard.

Also in the future; just announced are M4 Coupe 480hp and M4 Competition Coupe 510hp 6-cylinder turbo-petrol variants but no UK prices yet.

For now all 4 Series have the brand’s most popular M Sport spec as standard but for the first time for any BMW model there is an M Sport Pro Package option but this includes numerous options all in one bundle to simplify ordering.  Other packs are also available and some are listed below in my test car report 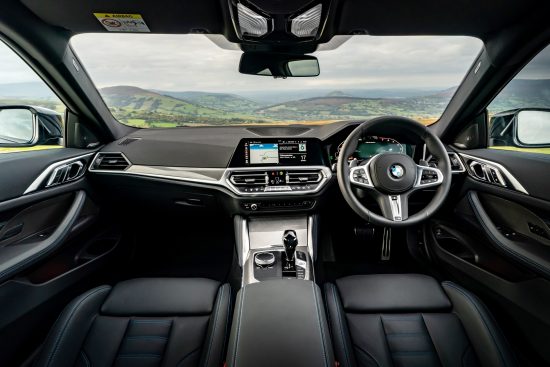 Inside the 4 Series Coupe has a four-seat layout with the usual driver-focused cockpit design with modern premium ambience and all have leather upholstery. The instrument panel is based around horizontal lines with the Coupe’s width emphasised by the contour lines extending into the door areas.

The start/stop button is now positioned in a control panel in the centre console, where the newly designed selector lever is joined by the iDrive Controller and the buttons for the Driving Experience Control switch and electromechanical parking brake. 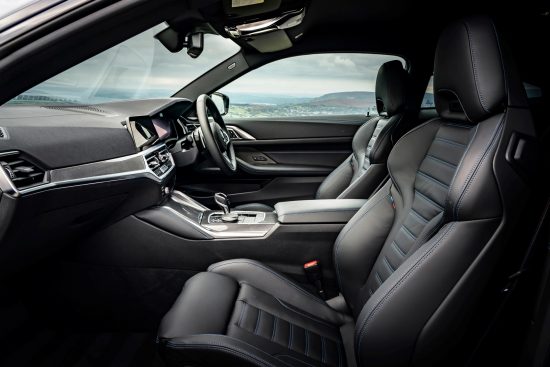 New style front sport seats are standard and they feature contoured side bolsters to provide support during hard cornering. All models also include front-seat heating as standard and electrically adjustable sports seats including memory function are available for customers who choose to upgrade to the Comfort Plus package.

There are of course other items of connectivity, sat-nav, digital cockpit and driving support systems as standard, but practicality hasn’t been overlooked either; the Coupe has 40:20:40 split rear seat backs, an array of larger storage areas and the boot space has been increased to 440 litres.

For my 4 Series Coupe brief test drive around the busy Oxfordshire roads I got behind the wheel of the expected best selling version now that diesel new car sales are falling, the 420i M Sport priced at £39,870. 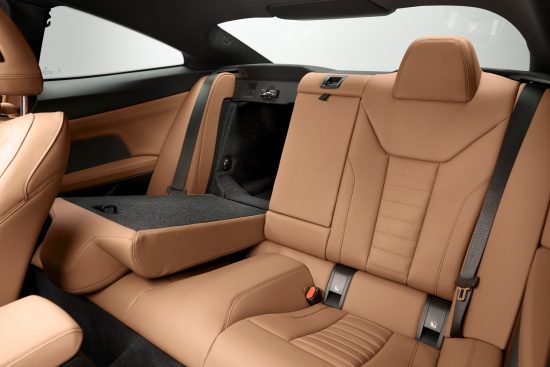 This is a shade under the £40k price level which incurs a penalty of £325 added each year from the second year of ownership to the £150 Standard rate VED road tax cost.  But it’s not simple in reality because the test car showcased several options which finally pushed the price up to £48,425.

Now a two-door, four-seater Coupe isn’t a sales contender for the majority of new car buyers, they are just not practical enough but the new looks alone will sell this new model to a number of affluent motoring enthusiasts who plainly enjoy driving; a niche band of customers who will enjoy its exclusivity appeal. 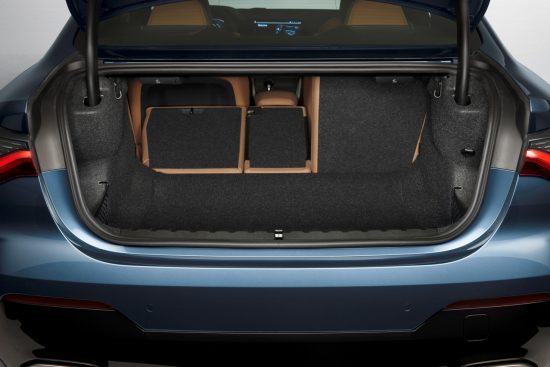 The new looks are an immediate wow factor, the proportions are well-balanced, the front end looks really aggressive so that might not sit well for ‘woke’ members of the public. Under the muscular bonnet and behind the like or hate large grille, is the 420i engine.

This translates as a 4-cylinder, 2.0-litre, BMW TwinPower turbocharged petrol engine with 184hp and 300Nm of torque from just 1,350rpm. This torque is available all the way up to 4,000rpm so the powerband is huge and wide spread. Mated with the 8-speed Steptronic auto transmission with manual mode and gear-shift paddles performance is impressively refined.

Not only is it responsive for acceleration from low through medium speeds, it still remains eager to accelerate at higher cruising speeds when needed.  It doesn’t set a blistering pace but is more than adequate and the torque response is ideal for the UK’s congested roads where overtaking quickly is more important than outright speed.

The high CO2 figure means VED First Year road tax cost for this model with the options listed is £540 with a Standard rate of £150 but if you venture over the £40k on-the-road price by adding options then add another £325 a year for 5-years to that Standard rate charge.  The dreaded company car tax rate is 33%.

As for other aspects of driveability; the steering is razor sharp in terns of directional response, it’s firmly planted at the front end during high speed cornering and I suspect able to provide a controlled rear wheel drive drift when track driving is pursued. 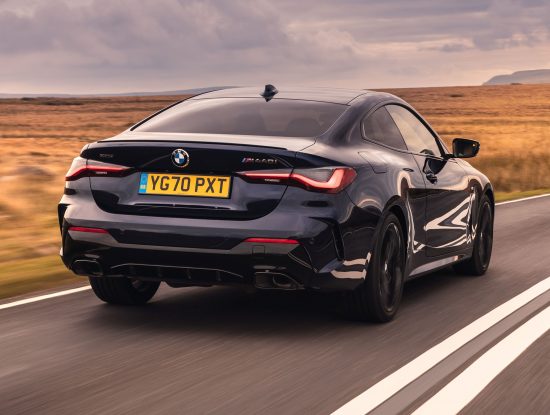 It had a near perfect overall handling balance as always from BMW and the lower centre of gravity helped. The ride comfort was really good for a car of this sporting nature, firm but not harsh.

Overall the 4 Series Coupe looks terrific, it’s pleasing to drive plus there a top quality interior to enjoy as well if you are in the market for a mid-sized Coupe.

Against: As a 2-door Coupe rear seat access is always compromised, limited rear and rear quarter visibility, adding options will add significant tax costs, aggressive styling and oversized grille could be seen as divisive by some potential owners.