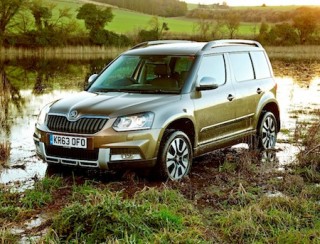 Skoda’s Yeti is no mythical creature being first spotted in 2009 and to date over 29,000 of them are in captivity in the UK.

Yeti is their popular, boxy shaped, five door ‘compact crossover’ and it’s been breeding so there are two versions for the new 2014 range now on sale.

For 2014 Yeti is available in two wheel drive only form ready for the urban jungle and the Yeti Outdoor is the same breed but with a more rugged appearance and with the option of two or four wheel drive versions. Prices range from £16,600 but leap up to £27,050 with the best selling version costing £21,915.

Becky Whitmore, Skoda’s UK large car product manager said at the media launch for the new Yeti range, that on average the prices have increased by £750 over the outgoing models but this reflects the increased specification, new design, the use of the latest VW Group engines and transmissions and improved levels of specification.

She added that last year 11,000 Yetis were sold in the UK but this year another 200 or so units will be added to that total and it is anticipated there will be a 50-50 split between retail and fleet/business user-chooser customers. It is expected that approximately 8,500 UK sales will be for diesel powered models and 70% of buyers will go for the new Yeti Outdoor versions of which 35% will be 4WD models.  The single most popular version will be the Yeti Outdoor 2.0 TDI 140PS 4×4 with SE specification which costs £21,915. 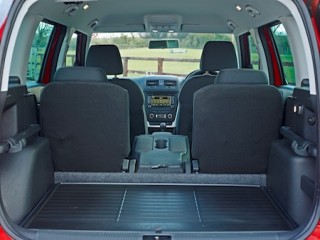 The four levels of specification are S, SE, Elegance for all Yeti and Yeti Outdoor variants and an ‘executive’ Laurin & Klement level with leather upholstery solely for the Yeti Outdoor range.

Overall the SE level will be the most popular appealing to 60% of customers. Power outputs range from 105PS for the entry-level 1.2 TSI petrol up to 170PS for the 2.0 TDI CR diesel while CO2 emissions start from 119g/km for the 1.6 TDI CR 105PS Greenline versions.

Another new feature making its debut in the Yeti Outdoor 4WD models is a fifth-generation Haldex clutch.  This is coupled with Skoda’s electronic differential lock, ground clearance of 180mm and new front and rear bumpers optimised to improve the arrival and departure angles to give the Yeti Outdoor 4WD versions a genuine off-road ability.  The new 4WD system also helps reduces CO2 emissions.

At the heart of the four wheel drive system is the new Haldex clutch which is more durable but 1.4kg lighter and easier to maintain than its predecessor.

Basically the system during normally on-road running provides 96% of the driving torque to the front wheels most of the time. When conditions dictate this automatically distributes the ratio of torque up to 50% at the rear and even 85% off road or in snow to just one wheel if the other three have lost traction.

For off-roading it is just a case of pushing a button to bring in a host of driving aid and added traction functions including uphill start assistant, downhill assist, ABS off-toad braking, anti-slip off road traction control and electronic differential lock which shuffles the driving torque, even diagonally, across the axles to the wheel or wheels with the most grip. There is a £200 Off Road package option for owners who will use their Yeti Outdoor on more challenging terrain and this includes extra underbody protection for the car and its running gear including plastic covering for the brake lines.

For those retail customers who want just 2WD then the new Yeti with the 1.2-litre TSI turbocharged petrol engine would be my choice, especially as it costs a more reasonable £18,110 with the most popular SE specification.

Its 105PS power output makes it a lively and responsive performer. Officially it will return 46.3mpg but on my Cotswold roads test drive in terrible wet and cold conditions it returned a still impressive 37.3mpg. 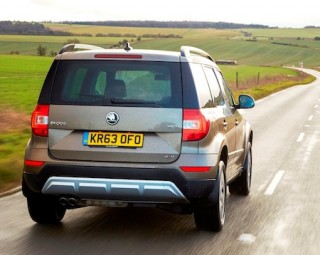 The majority of customers will go for the Yeti Outdoor with the 2.0-litre TDI 140PS engine with 4WD and a 6-speed manual gearbox priced at £21,915. It picks up acceleration quickly on-road taking just 9.9 seconds from zero to 62mph on its way to a 118mph top speed. Off-road it remains flexible a low speeds in high gears for maximum traction where it works well with the electronic trickery of the 4×4 drivetrain which is really impressive.

Officially on-road fuel consumption is 48.7mpg but a relatively slow 50mph drive in a long line of dawdling traffic for most of our test drive saw the vehicle return 50.3mpg.

With a record four consecutive years of UK sales behind them, up by 23% in 2013, Skoda are going for another record year in 2014. The latest and expanded Yeti range will give them a firm-footed start.

Against:  Some versions now look pricey and adding options with push up the costs further, select the model that suits your needs and pocket carefully.