Dealers are charging as much as £1,248 just to supply and fit a new battery on an ordinary family car, a new investigation by Auto Express has revealed.

Massive variations in the prices different dealers demand for the same work were also revealed in the mystery shopping exercise comparing the cost of new batteries for Britain’s 20 best-selling vehicles.

Some Mercedes dealers charge up to three times as much as others for the same job, with C-Class owners stumping up as much as £1,248 for a battery replacement when they could get the job done for £315 elsewhere within the same network.

Investigators from Auto Express posed as customers to ask franchise dealer service departments for quotes to supply and fit a new battery on Britain’s 20 most popular models.

Auto Express reporters were quoted as little as £98.46 to replace the battery on a Mokka X, at one Vauxhall dealership, but as much as £262.80 at another Vauxhall dealer – a price difference of 167%.

Volkswagen dealers also showed similar variations in pricing. On a Volkswagen Tiguan, battery replacement costs ranged from £190.66 to £320.66 – a variation of more than 68%.

The fairest and most consistent pricing was found across the Toyota network, where every dealer offered a price of £105 to replace the battery on a Yaris. 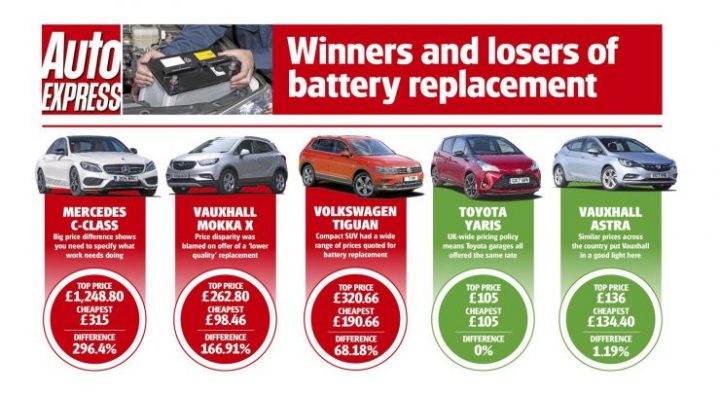