You are here: Home / Industry / Distribution / September registrations’ uplift for the fallen

The growth, albeit marginal, is the first seen since February with some 68,858 new vehicles joining the road during what is typically the second quietest month of the year as many buyers choose to wait for a ‘new’ numberplate in September.

Superminis remained the most popular vehicle class, growing market share to 34.0% as 7.4% more of them were delivered to customers than in August 2021. Multi-purpose, luxury saloon and lower medium vehicles also recorded growth of 31.0%, 1.5% and 1.3% respectively, while registrations of all other segments declined.

Year to date, registrations are down by -10.7% on last year at 983,099 units – more than a third (-35.3%) lower than during the first eight months of pre-pandemic 2019 – demonstrating the scale of the challenge ahead in terms of recovery. 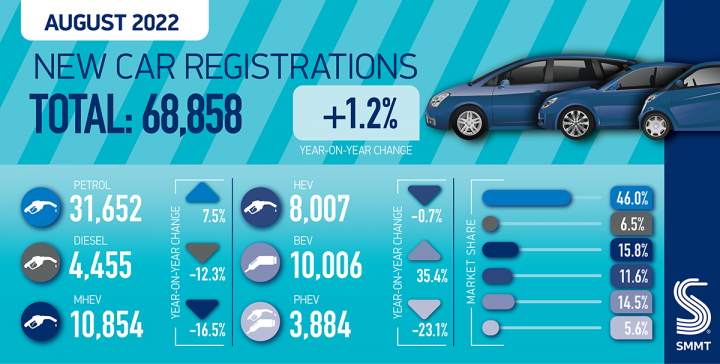 “Spiralling energy costs and inflation on top of sustained supply chain challenges are piling even more pressure on the automotive industry’s post-pandemic recovery, and we urgently need the new Prime Minister to tackle these challenges and restore confidence and sustainable growth.

“With September traditionally a bumper time for new car uptake, the next month will be the true barometer of industry recovery as it accelerates the transition to zero emission mobility despite the myriad challenges.”

John Wilmot, CEO, car leasing comparison website LeaseLoco, said, “A small uptick in new car registrations in August provides some respite after five months of declining sales. But it could be the calm before the storm.

“Electric car sales continue to provide a slither of light at the end of the tunnel.

“But production issues remain, and consumers are grappling with a cost of living crisis which is likely to get worse before it gets better, with energy bills expected to soar over the winter months.

“The road ahead is going to be a bumpy one, with weakening buyer demand against the backdrop of high inflation and rising interest rates.

“Households are having to make difficult decisions, cutting spending in the coming months as the cost of food and utility bills spirals. And that means families may delay purchasing big ticket items such as a new car, unless it’s absolutely necessary.

“That’s not to say that demand isn’t there. We have actually seen an increase in enquiries on the platform for car leasing deals, but consumers are understandably cautious about commiting to a deal in the current economic climate.”

The UK light commercial vehicle market fell by -24.6% to 15,520 units during what is traditionally one of the quietest months of the year ahead of the September plate change.

The performance means LCV registrations have declined every month of 2022, with August registration volumes the lowest recorded for the month since 2017 but this has been exaggerated by the pandemic shortages and reduced orders.