A rich and poor divide is splitting sales of electric cars.

The European Automobile Manufacturers’ Association (ACEA) has published new data highlighting the correlation between the affordability of electric cars and their market uptake.

This ACEA analysis compares national data on the sales of electrically-chargeable vehicles (ECVs) with GDP per capita in the EU member states for the full-year 2018.

The new ACEA data shows that all countries with an ECV market share of less than 1% – that is half of all EU member states – have a GDP per capita below €29,000.

This is the case in several southern countries – such as Spain, Italy and Greece – as well as in Central and Eastern European countries, like Lithuania, Bulgaria and Slovakia.

In Latvia, for instance, only 93 electric cars were sold last year. Poland has the lowest uptake of electric cars in the EU, with an ECV market share of just 0.2%. By contrast, an ECV share of above 3.5% only occurs in countries with a GDP of more than €42,000, like Finland, the Netherlands and Sweden. 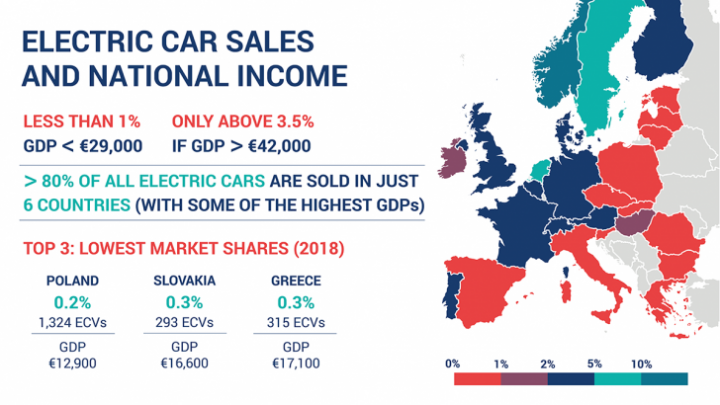 Sales of electric and other alternatively-powered cars will have to pick up strongly if these CO2 targets are to be achieved. Unfortunately, however, in 2018 only 2% of all new passenger cars registered throughout the EU were electrically-chargeable.

“Besides investing in charging infrastructure, governments across the EU need to put in place meaningful and sustainable incentives in order to encourage more consumers to make the switch to electric,” said ACEA Secretary General, Erik Jonnaert at a press conference in Barcelona.

“People throughout the EU should be able to consider purchasing an electric vehicle – no matter which country they live in – north or south, east or west. The affordability of the latest low- and zero-emission technologies needs to be addressed by governments as a matter of priority.”

Britain’s Society of Motor Manufacturers and Traders last week also called for more UK Government support to stimulate sales of electric models, with a return of incentives for plug-in models, and support for nationwide charging points as well as help with home installations.