With around 16.5 million car journeys by 5-million motorists estimated to have been made during the last UK Bank Holiday weekend in August, there were queues stretching up to 24 miles on the busy M5/M4 motorway interchange at Bristol, writes David Miles.

Ironically, that’s just a stone’s throw away from the iconic RAC offices tower at Almonsbury Interchange.

With 11 million members the RAC say they receive around 2.2 million callouts a year to breakdowns equivalent of 6 to 8 calls a minute.

The RAC offices alongside the M5/M4 motorway interchange are instantly recognisable by its 35-metre tall tower and central viewing room. A mast above this room extends the overall height to 65-metres.

Locally it is described as looking like one of those triangular soft cheese sections perched on a cocktail stick. It was built 25 years ago at a cost of £16m and took 17 months to build. The office complex beneath the tower houses 600 staff who deal with many of the RAC’s services including their Membership Centre.

As motorists returned home after the Bank Holiday week another major breakdown service provider was predicting nearly 74,000 call-outs for their help that weekend alone – that’s 13 breakdowns a minute for just this one of the UK’s motoring rescue organisation

Founded in 1897 the RAC is the UK’s oldest rescue service provider. But today they don’t just rescue members they provide other services for both private and business motorists.  Whether it’s roadside assistance, windscreen repair and replacement, learning to drive, vehicle inspections and checks, legal and financial services or up-to-the-minute traffic and travel information – the RAC could be a motorist’s one-stop-shop. The RAC organisation incorporates BSM, RAC Auto Windscreens, RAC Direct Insurance and HPI.

The RAC has been ranked first for customer service by J.D. Power and Associates’ UK Roadside Assistance Study for the past two years. They say their 1,600 patrols fix four out of five vehicles at the roadside and on average within 34 minutes.

Their vans carry more than 500 parts and tools and their latest recovery innovations include the capability to provide a booster charge for electric vehicles and with the correct towing appliance they can now recover 4×4 SUV and all wheel drive cars as well using specially designed three axle towing dollies which when not in use are carried aboard specially converted long wheel base vans and just coming on-stream new Isuzu pick-ups with large covered load areas. 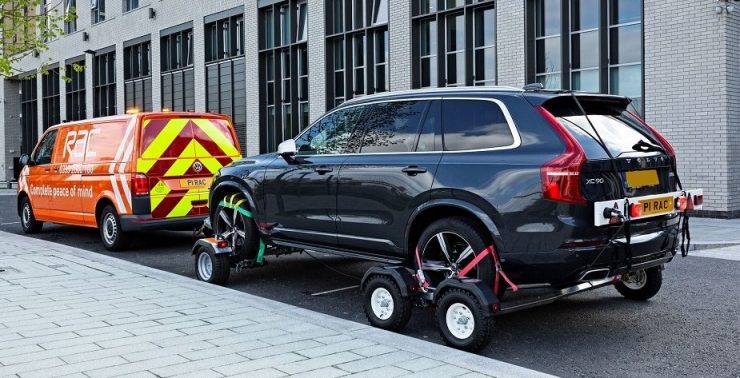